In this list I am talking about physical ugliness, not internal, so don’t even bother mentioning your most hated left or right wing politician or celebrity in the comments (I know you want to). The list does not include insects – they are a whole other level of ugliness! So, from the least ugly to the most revolting, natures 10 ugliest creatures. 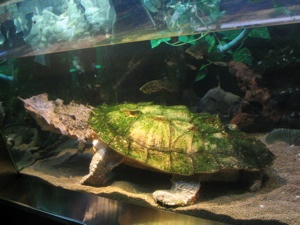 The mata mata is a freshwater turtle found predominantly in South America, notably in the Amazon and Orinoco basins. The animal’s peculiar physical aspect distinguishes it from other members of its order. It is an animal highly skilled in hunting techniques. French naturalist, Pierre Barrère described it thus:

“large land turtle with spiky and ridged scales”. The mata mata is quite visually distinctive: its head is triangular, large, and extremely flattened, with many tubercles and flaps of skin, most notably a ‘horn’ on the nose. There are two barbels on the chin and two additional filamentous barbels at the jaw. The snout is long and tubular. The upper jaw is neither hooked nor notched. 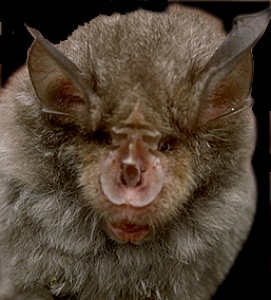 Horseshoe bats (the Rhinolophidae family) are a large family of bats including approximately 130 species grouped in 10 genera. All rhinolophids have leaf-like protuberances on their noses. In rhinolophines species, these take the shape of a horseshoe; in hipposiderine, they are leaf- or spear-like. They emit echolocation calls through these structures, which may serve to focus the sound. Most rhinolophids are dull brown or reddish brown in color. They vary in size from small to moderately large. 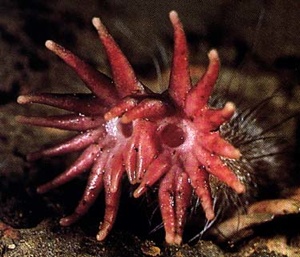 The Star-nosed Mole is a small North American mole found in eastern Canada and the north-eastern United States. It lives in wet lowland areas and eats small invertebrates, aquatic insects, worms and molluscs. It is a good swimmer and can forage along the bottoms of streams and ponds. Like other moles, this animal digs shallow surface tunnels for foraging; often, these tunnels exit underwater. It is active day and night and remains active in winter, when it has been observed tunnelling through the snow and swimming in ice-covered streams. 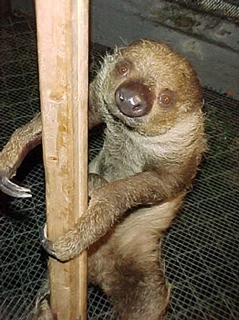 Sloths are medium-sized mammals that live in Central and South America. Sloths are omnivores. They may eat insects, small lizards and carrion, but their diet consists mostly of buds, tender shoots, and leaves. Sloth fur also exhibits specialized functions: the outer hairs grow in a direction opposite from that of other mammals. In most mammals, hairs grow toward the extremities, but because sloths spend so much time with their legs above their bodies, their hairs grow away from the extremities in order to provide protection from the elements while the sloth hangs upside down. 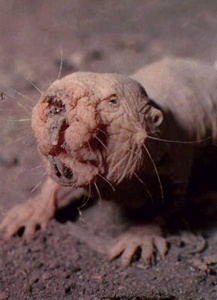 The Naked Mole Rat, also known as the Sand Puppy, or Desert Mole Rat, is a burrowing rodent native to parts of East Africa. Typical individuals are 8–10 cm long and weigh 30–35 g. Queens are larger and may weigh well over 50 g, the largest reaching 80 g. They are well-adapted for their underground existence. Their eyes are just narrow slits, and consequently their eyesight is poor. However, they are highly adapted to moving underground, and can move backwards as fast as they move forwards. Their large, protruding teeth are used to dig. Their lips are sealed just behind their teeth while digging to avoid filling their mouths with soil. Their legs are thin and short. They have little hair (hence the common name) and wrinkled pink or yellowish skin. 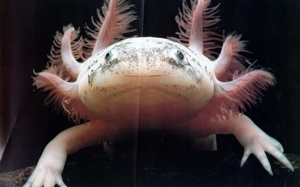 The Axolotl (or ajolote) is the best-known of the Mexican neotenic mole salamanders belonging to the Tiger Salamander complex. Larvae of this species fail to undergo metamorphosis, so the adults remain aquatic and gilled. Their heads are wide, and their eyes are lidless. Their limbs are underdeveloped and possess long, thin digits. Axolotls have barely visible vestigial teeth which would have developed during metamorphosis. The primary method of feeding is by suction, during which their rakers interlock to close the gill slits. Axolotls have 4 different colours, 2 naturally occurring colours and 2 mutants. The 2 naturally occurring colours are wildtype (Varying shades of brown usually with spots) and melanoid (black). The 2 mutants colours are leucistic (pale pink with black eyes) and albino (golden, tan or pale pink with pink eyes). 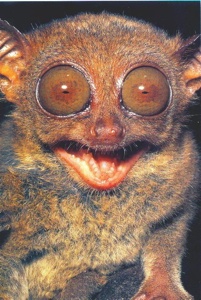 Tarsiers are prosimian primates of the genus Tarsius. Tarsiers have enormous eyes and long feet. Their feet have extremely elongated tarsus bones, which is how they got their name. They are primarily insectivorous, and catch insects by jumping at them. They are also known to prey on birds and snakes. As they jump from tree to tree, tarsiers can catch even birds in motion. Tarsiers have never formed successful breeding colonies in captivity, and when caged, tarsiers have been known to injure and even kill themselves because of the stress. 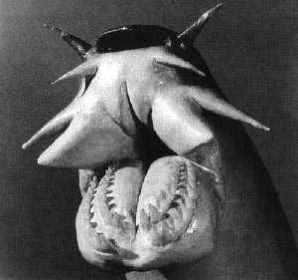 Despite their name, there is some debate about whether Hagfish are strictly fish, since they belong to a much more primitive lineage than any other group that is commonly defined fish. Hagfish are long, vermiform and can exude copious quantities of a sticky slime or mucus. When captured and held by the tail, they escape by secreting the fibrous slime, which turns into a thick and sticky gel when combined with water, and then cleaning off by tying themselves in an overhand knot which works its way from the head to the tail of the animal, scraping off the slime as it goes. Hagfish have elongated, ‘eel-like’ bodies, and paddle-like tails.

The Aye-aye is a native to Madagascar that combines rodent-like teeth with a long, thin middle finger to fill the same ecological niche as a woodpecker. The Aye-aye is the world’s largest nocturnal primate, and dwells predominantly in forest canopies. The adult Aye-aye has black or dark brown fur covered by white guard hairs at the neck. The tail is bushy and shaped like that of a squirrel. The Aye-aye’s face is also rodent-like, the shape of a raccoon’s, and houses bright, beady, luminous eyes. Its incisors are very large, and grow continuously throughout its lifespan. 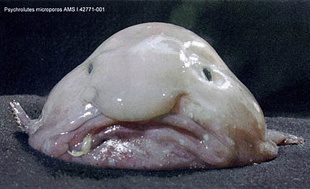 The Blobfish inhabits the deep waters off the coasts of Australia and Tasmania. Due to the inaccessibility of its habitat, it’s rarely seen by humans. Blobfish are found at depths where the pressure is several dozens of times higher than at sea level. To remain buoyant, the flesh of the Blobfish is primarily a gelatinous mass with a density slightly less than water; which allows the fish to float above the sea floor without expending energy on swimming. The relative lack of muscle is not a disadvantage as it primarily swallows edible matter that floats by in front it.