Everyone loved robots, and they have been the source of umpteen movies, books, and comics. In homage to the robots of film, we have picked the 10 greatest. This list is restricted entirely to robots in movies – there are no robots here from television. I have also excluded robots that are part of a large group, such as the droid army from Attack of the Clones. 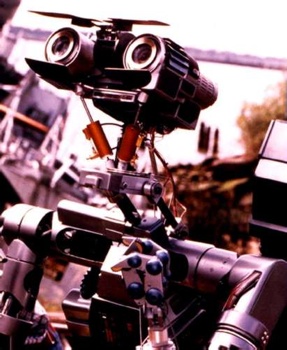 Johnny 5 (originally called “S-A-I-N-T Prototype Number 5”) is the fictional robotic star of the movies Short Circuit and Short Circuit 2 and a TV special called Hot Cars, Cold Facts. He is a former military robot imbued with intelligence and sentience by a lightning bolt, and is considered to be alive in the philosophical sense, as he has emotions and is self-aware. Johnny 5 is very curious and inquisitive with an almost insatiable thirst for “input” of just about any kind, but he is especially fond of books and television. While he started life as a military prototype he has a great respect for life and refuses to use his capabilities to harm others, even when they have no such compunctions towards him. He is very intelligent and inventive with an encyclopedic knowledge, but can be quite naive and child-like at times and can be too eager to trust people that he shouldn’t. [More] 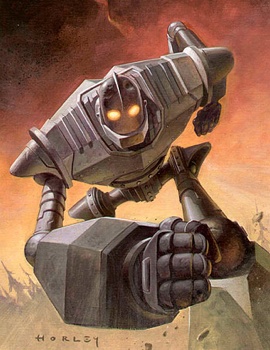 The Iron Giant is a 1999 animated science fiction film produced by Warner Bros. Animation, based on the 1968 novel The Iron Man by Ted Hughes (Sylvia Plath’s husband). Brad Bird directed the film, which stars a voice cast of Eli Marienthal as Hogarth Hughes, as well as Jennifer Aniston, Harry Connick Jr., Vin Diesel, Christopher McDonald and John Mahoney. The film tells the story of a lonely boy raised by his single mother, discovering a giant amnesiac “iron man” that fell from space. Hogarth, with the help of a beatnik named Dean, has to stop a military force and an egotistical federal agent from finding and destroying the Giant out of paranoia. [More] 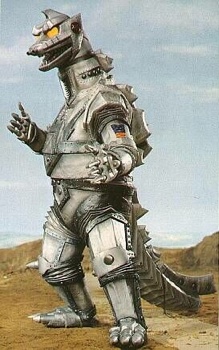 Mechagodzilla is Godzilla’s mechanical doppelgänger from various Godzilla movies. The original Mechagodzilla was created as a weapon of destruction by the Simians. It first appeared in a pseudo-flesh outer covering, masquerading as the real Godzilla during attacks against Japan in Godzilla vs. Mechagodzilla. Curiously, while the Simians gave Mechagodzilla a laser beam in his mouth to mimic Godzilla’s atomic ray, they didn’t bother replicating Godzilla’s unique roar. Godzilla’s ally Anguirus wasn’t fooled by the impostor, but in the resulting fight Mechagodzilla broke Anguirus’ jaw and sent him fleeing underground. [More] 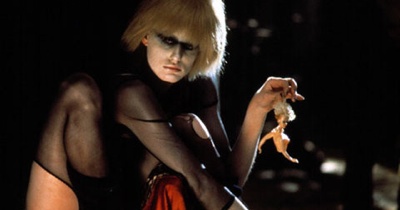 Pris is a “pleasure model” (incepted on Valentine’s Day) created for entertainment and thus even more of a slave-object than the others. However, she shows that she can be quite adept at manipulation of the human male when she uses her wiles to “make friends” with J.F. Sebastian, a man who, until then, literally built his friends. Pris is also the girlfriend of fellow replicant Roy Batty. At an A Physical Level, she is shown to have super-human endurance (as in the scene where she grabs a boiling egg with her bare hand and tosses it to Sebastian). Her B Mental Level puts her at a lower intellectual level than Roy. [More] 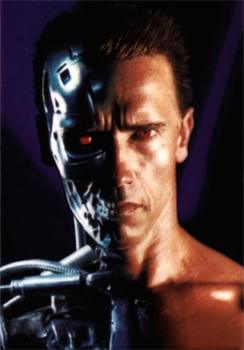 “The Terminator” is a character portrayed by Arnold Schwarzenegger — a cyborg, initially portrayed as a programmable assassin and military infiltration unit. In the fictional Terminator universe, the Terminator is a formidable robotic assassin and soldier, designed by the military supercomputer Skynet for infiltration and combat duty, towards the ultimate goal of exterminating the human resistance. It can speak naturally, copy the voices of others, read human handwriting, and even genuinely sweat, smell, and bleed. To detect the Terminators, who are otherwise indistinguishable from humans, the human resistance uses dogs to alert humans to their presence. [More] 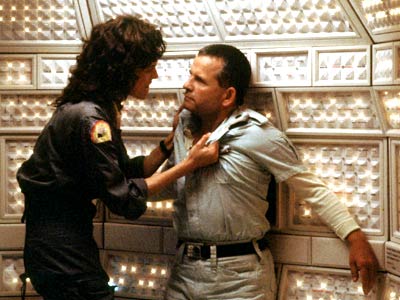 Ash is the Nostromo’s science officer from the movie Alien. He administers medical treatment, conducts biological research and is responsible for investigating any alien life forms the crew may encounter. It is at Ash’s insistence that the crew investigates the mysterious signal emanating from LV-426. After the Alien has eliminated several of the other crew members, Ripley discovers through the ship’s computer “MOTHER” that Ash has been given special orders by the Weyland-Yutani Corporation to ensure the return of the Alien to the company’s laboratories, even at the expense of the crew. When confronted by Ripley, Ash attacks her. Due to the risk of spoilage, I will say no more – you need to watch the film to see what happens next! [More] 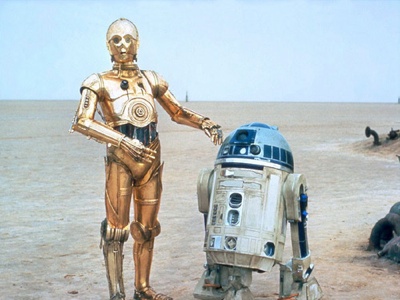 C-3PO is a protocol droid designed to serve humans, and boasts that he is fluent “in over six million forms of communication.” C-3PO is generally seen with his long-time counterpart, R2-D2, a small, quirky astromech droid. Threepio’s main function as a protocol droid is to assist with etiquette, customs, and translation so that meetings of different cultures run smoothly. In his time, C-3PO loyally served over forty masters. R2 has often been a “box of tricks” for the protagonists, including many apparatti and manipulators. Some of his gadgets include a taser, a gripping tool, a computer interface, and a periscope. This “box of tricks” image was parodied by Star Wars Spoofs with an image of R2 featuring such items as a popcorn machine and a bottle opener plus other traditional pocket knife items. [More | More] 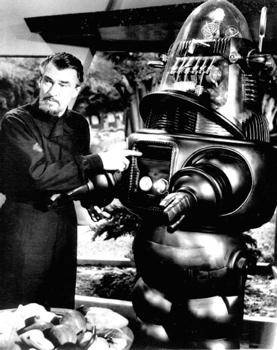 Robby the Robot was a popular fictional character who made a number of appearances in science fiction movies and television programs from 1956 onward. Robby the Robot was a 7.2 foot, 2 inch tall mechanical suit designed for an actor to wear, to play the part of a robot. It was originally designed for the 1956 MGM movie Forbidden Planet, and quickly became a science fiction movie and television icon. As Forbidden Planet was inspired by Shakespeare’s play The Tempest, Robby’s character was inspired by the Sprite in the play. Before the appearance of Robby, robots in movies and plays tended to lack personality characteristics, being simple mechanical devices. Since his appearance, robots with personalities have become more and more common in movies. [More] 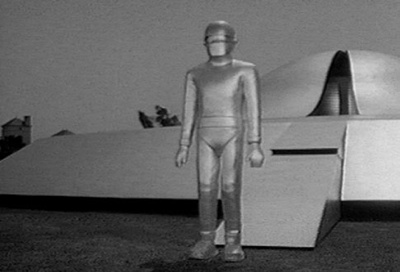 Gort is a fictional humanoid robot in the 1951 movie The Day the Earth Stood Still. The giant metal robot accompanies Klaatu, a visitor to Earth from a distant planet, aboard a flying saucer. He does not speak, but uses a beam weapon projected from beneath a visor to vaporize weapons and obstacles. Klaatu described him as being part of an interstellar police force. He claims that the people of the universe constructed numerous robots like Gort and gave them irrevocable powers to respond to violent actions in order to “preserve the peace.” He further claims that “There’s no limit to what [Gort] could do. He could destroy the Earth.” The character was based loosely on Gnut, a giant green robot from outer space in “Farewell to the Master”, a 1940 short story by Harry Bates which was used as the basis for Edmund H. North’s screenplay. [More] 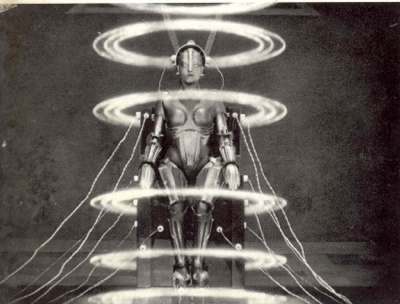 Maria, the Maschinenmensch from Metropolis, played by German actress Brigitte Helm in both her robotic and human incarnations, is one of cinema’s most famous icons. The haunting blank face and pronounced female curves have been the subject of disgust and fascination alike. The Maschinenmensch has many names given her through the years: Parody, Ultima, Futura, Robotrix, (false) Maria and Hel. The Maschinenmensch’s back story is detailed in Thea von Harbou’s original 1927 novel. It is described as a very delicate, but faceless, transparent figure made of crystal flesh with silver bones and its eyes filled with an expression of calm madness. Rotwang addresses it as “Parody”. The Maschinenmensch is a perfect example of the Frankenstein complex, where artificial creations turn against their creator and go on a rampage. Artificial beings with a malevolent nature were a popular theme at the time. [More]