This is a list of angels and demons probably not featured in the recently released movie of the same name. The entities listed below, have at various times been subject to exoteric and esoteric teachings throughout our history in many allegedly divinely inspired traditions as physical beings or as a psychological projection into the outer world of our own good and evil emotions and thoughts. 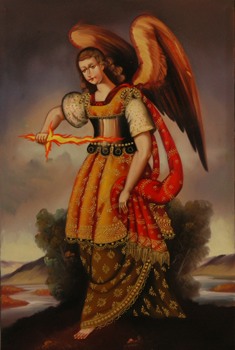 In Christianity, one of the 7 archangels, Uriel plays a role in the rescue of Jesus’ cousin John the Baptist from the massacre of the innocents. He carries John and his mother Saint Elizabeth to join the Holy Family after their Flight into Egypt. Their reunion is depicted in Leonardo da Vinci’s Virgin of the Rocks. From medieval Jewish mystical traditions, Uriel is also the Angel of Sunday and the Angel of Poetry. 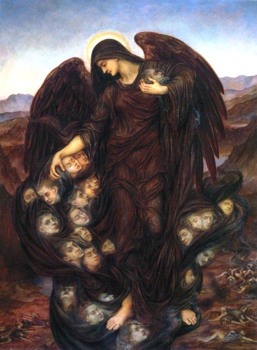 The archangel of death in Islam also equated with the angel of death in Judeo-Christian traditions and sometimes more commonly known as the grim reaper. He has 4 faces to watch over the 4 cardinal points of the earth, he has 4000 wings, and his whole body consists of eyes and tongues, the number of which corresponds to the number of people inhabiting the earth, he will be the last to die, recording and erasing constantly in a large book the names of men at birth and death. 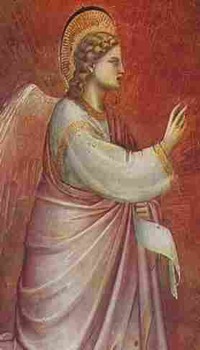 In Christianity and Islam, Gabriel prophesied the birth of Jesus. He is regarded by Muslims as the intermediary between God and Muhammad in revealing the Qur’an, where he is known as Jibril. Believing in angels is one of the six Articles of Faith in Islam. In Mormonism he was both Noah in his mortal existence and Gabriel in the realms of heaven. Gabriel is mentioned only twice in the New Testament, the passage “I am Gabriel, who stand before God” (Luke 1:19), have led some to think that he must belong to the highest rank, however he is an archangel which is 8th in rank of the 9 orders of angels. The orders are: Seraphim, Cherubim, Thrones, Dominions, Virtues, Powers, Principalities, Archangels and Angels. 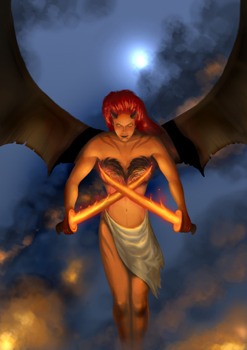 These are demons, male and female respectively who inhabit people’s dreams in order to have sex with them. One such encounter with an Incubus is said to have resulted in the birth of Merlin, the wizard of Arthurian legend. The Succubus are said to be highly attractive, sustaining their life force by repeated and forced fornication in the presence of the mans wife to the point of complete exhaustion resulting in death. 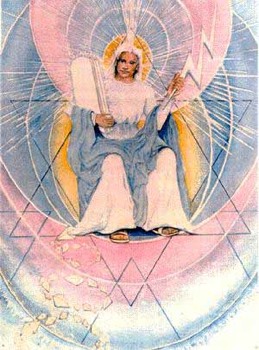 Metatron is primarily associated with Judaism. The Zohar (a Kabalistic work attributed to Simeon Ben Iochai) identifies him as the Angel who oversaw the exodus of the people of Israel out of Egypt. Many esoteric traditions teach that he is the scribe who takes down God’s words, it is said he has an good sense of humor, and can at times be very mischievous! Metatron is associated with the symbol of a blacksmith’s hammer, which represents the shattering of our realities, and then the forging of new ones. 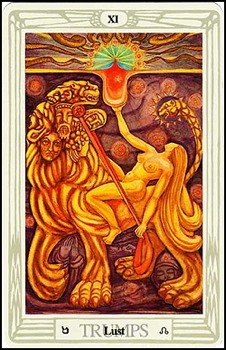 Referred to as The Guardian of the Abyss, The Scarlet Woman, Mother of Abominations, her place in St. John’s Book of Apocalypse (Revelation) and Enochian magic inspired occultists to elevate her to the position of the liberated woman within the Mystical system of Thelema. This culminated in a series of magical rituals known as the Babalon Working. These took place between January 4 and March 4, 1946 by Jack Parsons (the co-founder of the Jet Propulsion Laboratory JPL) and his partner and scribe Frater H. The point of these rituals was to invoke and manifest Babalon, then to conceive a child who would bring forward the aeon of Horus and the death of all religion. The success of the rituals has been debated ever since, in esoteric and occult legend. Jack Parsons died in 1952 aged 38 in an explosion at his home, and rumors have persisted of a magical working gone wrong. A crater on the far side of the moon is named after him. After the Babalon working, the scribe, Frater H, eloped with Parson’s wife and his money (a skill he became very good at). The identity of Frater H? None other than L Ron Hubbard the founder of scientology! 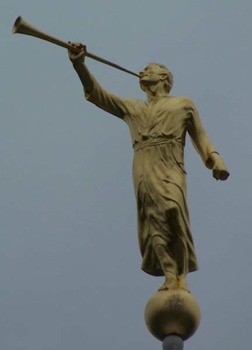 Moroni is the name given by Joseph Smith to the angel that he claimed appeared to him several times in the 1820s. Smith believed that he was the keeper of the gold plates upon which was written, the book of Mormon. The plates were written in unusual characters, referred to as “reformed Egyptian”. Smith hid behind a blanket so no one else could see the golden tablets, and translated them into King James style English. Smith claimed that Moroni instructed Smith to use every means at his disposal to facilitate the translation including the use of a magical stone. Mormon theology says that when Smith finished the translation, the angel Moroni took the gold plates away with him to heaven. In 1826 Joseph Smith was charged with being a disorderly person and an impostor by a court in Bainbridge NY. 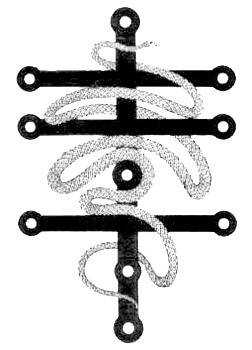 In Aleister Crowley’s magical system of Thelema, the serpent Choronzon is the ‘dweller’ in the Abyss, the final great obstacle between the magician and true enlightenment. Choronzon is known as the ‘Demon of Dispersion’, and described by Crowley as “a temporary personification of the raving and inconsistent forces that occupy the Abyss.” The name Choronzon though popularized by Aleister Crowley, first occurred in the Enochian records of John Dee (a consultant on many issues to Queen Elizabeth I) where Choronzon is synonymous with the serpent of the garden. 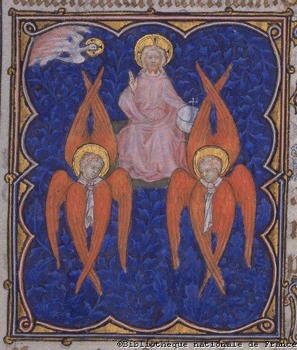 Many civilizations believe in angels, and many names have been given to the various angels. In the Judeo-Christian tradition, the Bible names only three angels that have a definite individual personality. They are Michael – Prince of Angels, Gabriel – Archangel of annunciation, resurrection, mercy, revelation and death, (Gabriel is considered by many theologians to have been female.) and Satan – The Fallen Angel. The Seraphim are said to be the highest order of angels who guard God’s throne. They are often depicted as ‘burning angels’ to represent them on fire with love for God. In the Bible Isaiah saw them as six winged beings. Tradition holds that they were the first creation of God, to enable God to know himself, through their existence and experiences. 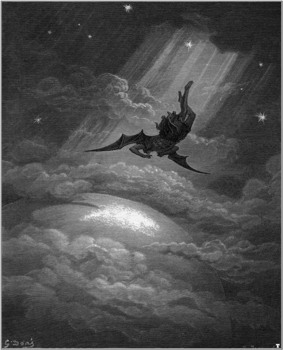 Lucifer means “light-bearer” and it is used in various places in the Vulgate Bible as a reference to the planet Venus, a sign of the Zodiac, and “the aurora” (Job 11:17, Job 38:32, Psalm 109:3), and also, most significantly for this list, as the name of the King of Babylon (Isaiah 14:12) which is considered in Christianity to be a metaphor for the Prince of Devils (Lucifer is not considered to be the Devil’s name in Christianity – merely the state from which he fell). The use of the Morning Star metaphor is symbolic of the fall of the light-bearer – as the morning star vanishes in the daylight, so the devil fell from heaven. Interestingly, the word is also used to refer to Jesus in 2 Peter 1:19.