[Congratulations! This is the first prize winner in our 2009 Christmas Competition. Merry Christmas one and all!]

This list is more completely named: Ten Bizarre Things That You Did Not Know About Christmas (And Probably Didn’t Want To). I love Christmas, and I love bizarre, morbid, and just plain weird trivia. I tried to have a varied selection of somewhat obscure trivia in the hopes that you would learn something about Christmas that not only did you not know, but hopefully that you really wish that you STILL did not know. So, without further ado, the list! 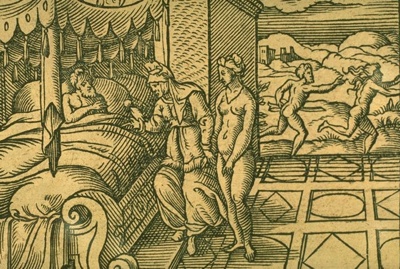 What Do Incest, An Embalmed Corpse, And The Baby Jesus Have In Common? Most people know that, according to the Bible, the magi brought myrrh as a gift to the infant Jesus, along with gold and frankincense. Some people also know that myrrh (dried tree sap) was used as an embalming ointment or as incense for funerals and cremations (to mask the smells). Few people know that, according to Ovid’s Metamorphoses, myrrh trees originated as a result of Myrrha’s lust for her father, Cinyras. With the connivance of her nursemaid, Myrrha repeatedly had sex with her unsuspecting father. When her father realized Myrrha’s identity and that he had been boinking his daughter, he attempted to kill her but she escaped. The gods took pity on her and to release her from her shame, turned her into a myrrh tree. Presumably the Magi did not think to include a gift receipt so that Jesus could return the myrrh, which then became the First Unwanted Christmas Present. 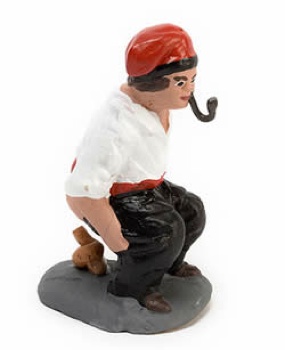 Everyone has seen a nativity set; the simplest consist of the baby Jesus, Mary and Joseph and perhaps a few shepherds or animals, while the most extensive contain not just the Holy Family but entire cities with hundreds or thousands of inhabitants. In parts of Spain, Portugal and Italy one of these figures will often be the caganer. While traditionally the figure of a Catalan peasant, now it can be any person, Santa Claus, or the devil, so long as they are in the act of defecating. The caganer is usually placed in a discreet location not in close proximity to the manger. Presumably this is so as not to contaminate the animals’ drinking water, one guesses. 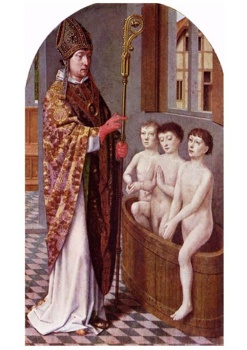 Rub-a-dub-dub, Three Dead Kids In A Tub! Jolly old Saint Nicholas is not only the patron saint of children, but, according to legend, he brought back to life three children after they were murdered and pickled in brine. Supposedly the three children spent the night at the house of an innkeeper or a butcher, who then killed, gutted, dismembered and pickled the youngsters, and was planning to pass off their remains as pork. Saint Nicholas happened along and miraculously resuscitated, reassembled, and reanimated the youths. In art of Saint Nicholas one will sometimes see children standing in vats or tubs; that would be why! This legend is also referred to in the French song “La Légende de Saint Nicolas”. No word is available on whether the kids were dill or garlic flavored. 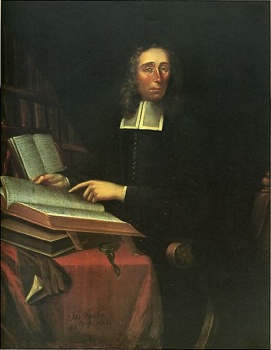 Let’s Celebrate Christmas Like Our Forefathers – By Banning It! Here in the United States, every year we have our traditional argument over whether or not left-wing liberals, the ACLU, commie agitators, Jews, the government, big business, or any combination thereof are involved in a nefarious plot to “destroy” Christmas. Most proponents of this theory endorse a return to Christmases such as in the olden days, apparently unaware that, from 1659 to 1681, Christmas was actually banned in Massachusetts. There were several reasons for this; the Puritans did not consider December 25 to be a religious day (if God would have wanted us to celebrate it, then He would have specified that date in the Bible), Christmas was celebrated by Catholics and hence was anathema to the Puritans, and, perhaps most importantly, Christmas was not being celebrated by quietly spending the day at home with family or at church, but rather celebrants spent the day “consumed in Compotations, in Interludes, in playing at Cards, in Revellings, in excess of Wine, in mad Mirth …” according to the Rev. Increase Mather (whose joyless visage is pictured above). I suspect that if most Americans were offered the choice of spending Christmas shopping or, as in the days of our forefathers, getting drunk, we’d return to a “traditional” Christmas in less time than it takes Santa to get back up the chimney. 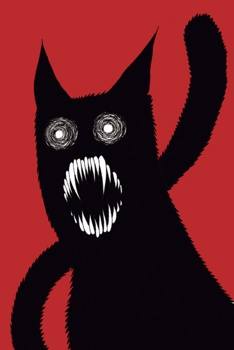 Readers of the site are familiar with Krampus, aka Schmutzli aka Knecht Ruprecht, who is the companion of Saint Nicholas and who punishes the bad children by stuffing them into his sack and taking them to the Black Forest to eat them, to hell, or to the river to drown them. This charming fellow was discussed in the list and comments of 15 Quite Bizarre Factlets. While obviously this prospect would be a bit intimidating, at least children can save themselves from an unpleasant fate by good behavior – unlike the unlucky Icelander children. According to an old Icelandic tradition, everyone has to get one new piece of clothing for Christmas. Anyone who did not was in danger of being eaten by the Christmas Cat, a large vicious black feline who belonged to a family who were descended from trolls. (Children who did not behave were eaten by the ogress troll-mother herself.) Rumor has it that Wal-Mart is considering suggesting that the Christmas Cat had kitties who emigrated around the world, in an attempt to increase next year’s Christmas clothing sales. 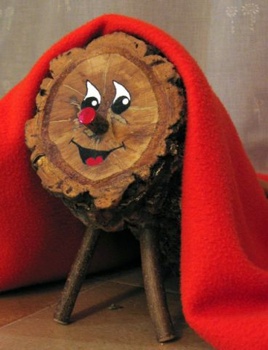 One of the more unusual bearers of Christmas presents, with a unique delivery method, is the Caga tió (pooping uncle or, in this case, pooping tree trunk). Found in the Catalonia region, it consists of a hollow log. Beginning at the Feast of the Immaculate Conception, the family “feeds” the tio and covers him with a warm blanket each night. Then, at Christmas, the family gathers together, sings songs, puts the tio partly into the fire and beats it with sticks, until it excretes presents of candy, nuts or figs. When the tio is finished pooping it signals this by dropping salted herring, a head of garlic, an onion, or by “urinating”, whereupon the entire log is burned. This is where the expression “If you don’t give me a present I’ll beat the crap out of you” originated. 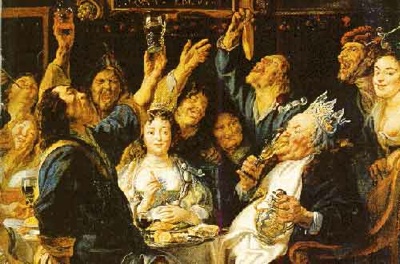 Wassailing sounds like such an innocuous, wholesome tradition, knocking on doors, singing a few songs, and perhaps being offered a warm drink or cookies. The original wassailers, however, were more aggressive, and would invade a home, demanding food, drink or money from the homeowners, and refusing to leave until they received their “recompense”. If forcibly ejected they would curse, threaten and sometimes vandalize the property of their “hosts”. Think of some of the later verses from We Wish You a Merry Christmas: “Now bring us some figgy pudding…. we won’t go until we get some.” If you are ever the victim of a home invasion you could probably lighten the mood by pointing out the similarity between your attackers and people who sing “Don we now our gay apparel, fa-la-la-la-la”. 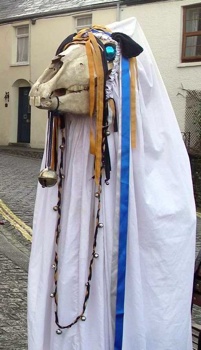 The Old Gray Mare, She Ain’t What She Used To Be. The Mari Lwyd is a horse’s skull, decorated with bells and ribbons, which is set on a stick and carried by an operator hidden under a white sheet. The eye sockets are often filled with green glass and the jaw may be spring-loaded so that the Mari can “snap” at passers-by. She is to be found in Southeast Wales around the Christmas season, particularly at New Year’s. The Mari and her male companions attempt to enter households or pubs via a contest where they would trade insults with the householders via song (apparently an early precursor to rap contests). If the Mari and her male friends won, they would enter and obtain food and drink. The Mari particularly enjoys this because, as the men get drunker and drunker, the Mari begins to appear prettier, younger, thinner, and less dead to them.

2
Castrations and a Cross 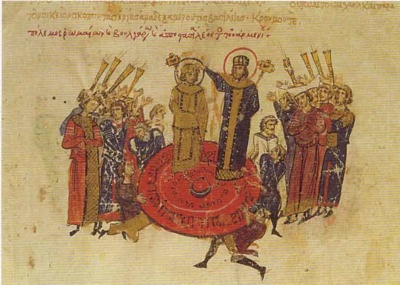 Leo V became Byzantine Emperor in 813 after forcing the abdication of Michael I, whereupon Leo had Michael’s sons castrated. On Christmas Day in 820, Leo was praying alone in front of the altar of Hagia Sophia. A group of conspirators, disguised as priests and monks, and led by Michael the Amorian (no relation to Michael I), entered and drew their daggers to assassinate Leo. Unarmed and alone, Leo tried to defend himself with an incense burner in one hand and a large wooden cross in the other. After an hour he succumbed to his injuries, Michael was immediately declared Emperor, and Leo’s four sons were castrated. This was not the origin of Christmas tree balls, fortunately.

Q. What Do You Get A Dead Baby For Christmas?
A. A Dead Puppy.

The Coventry Carol (the one which begins Lullay, thou little tiny child, Bye, bye, lully, lullay) is an old song, dating back to the 15th century. It was performed in Coventry, England, as part of a Christmas play known as The Pageant of the Shearmen and Tailors, and that particular song refers to the Slaughter of the Innocents. This, according to the Gospel of Matthew, is when King Herod, fearing the competition from the newborn King of the Jews, sent his soldiers to slaughter all male children in and around Bethlehem who were age two or younger. In the pageant, the song was sung by the women of Bethlehem to their children to soothe them, right before the soldiers killed them. It seems to have an odd topic to have survived for so long, but I suspect that department store Santas may be its biggest fans. [JFrater: the Coventry Carol is my favorite Christmas Carol, so for your listening pleasure I have included a youtube clip of it above.]