The Holy Grail is a sacred object figuring into literature and certain Christian traditions, most often identified with the dish, plate, or cup used by Jesus at the Last Supper and said to possess miraculous powers. Conspiracy theories abound on the nature of the grail and the final location. This list looks at ten of the possible resting places of this mysterious object. 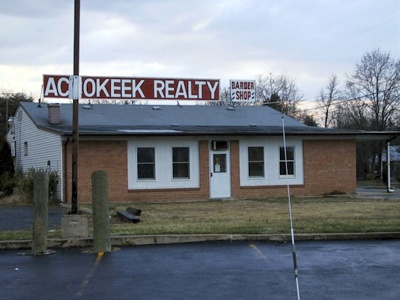 The locals of the Accokeek area claim that a Jesuit priest stowed away on board Captain John Smith’s ship, as he sailed up the Potomac River sometime around 1606-07, and that this priest had ties all the way back to the Knights Templar.

The legend states that he had the Grail for years in England and Europe, possibly taken from #7 when treasure seekers started looking for Arthur’s grave. Somehow the Grail passed down to this nameless priest, who fled for environs where few people would care about the Grail.

Its location in the Accokeek area is not known. 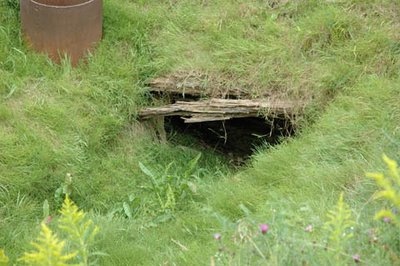 “The Money Pit” was discovered by three teenage boys playing on the island, in 1795, or so the story goes, and over the centuries, 6 people have died attempting to excavated the mysterious treasure everyone is sure is down there.

The longer it took to excavate, the wilder imaginations ran, until today, the Pit is no longer thought to hold merely chests of gold doubloons, but the Holy Grail itself, hidden there by the Knights Templar in the early to mid-1300s.

This is no idle assumption, since there is, in fact, an arrangement of boulders on the island that forms a perfect cross 250 meters long by 100 meters wide, oriented so that the head points due East. It is on the north side of the island in a clearing only 50 square meters larger the cross. The Pit is due south through a woodlot.

The most compelling evidence seems to be the ingenious design of the Pit, which was fitted with a water channel booby trap leading up and out to the open water.

Whatever is down there lies at exactly 100 feet and has been described as “metal in pieces.” They say the mystery will not be resolved until one more person dies in the pit. 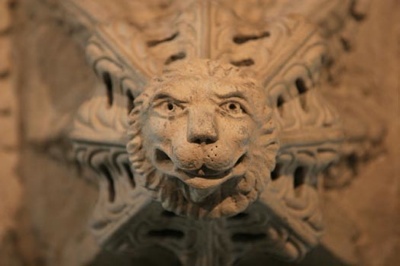 One of the legends used by Dan Brown in The Da Vinci Code, this one centers on secret stone chambers and channels under the Collegiate Chapel of St. Matthew, on Roslin Hill, and there are tons of extremely strange carvings in and around the chapel that add ominous weight to this legend.

It was built starting in 1456 at the behest of its founder, William Sinclair, a nobleman and knight. He is rumored to have been a descendant of Knights Templar.

There are carvings of what appear to be Indian corn (maize) around the windows. Maize was unheard of in Europe at the time of the chapel’s construction.

There are carvings of “green men,” which seem to symbolize Celtic traditions regarding spring and summer (pre-Christian).

The Apprentice Pillar is the real stand-out. No one knows why it was carved as it was, and there are no other pillars like it in the chapel, or anywhere in Europe. The chapel’s carvings took 40 years to complete, so they must have been significant to the Sinclair, who died just before they were finished. The legend states that the Grail resides inside the Apprentice Pillar.

Or perhaps in the family crypt under the basement. This crypt is sealed shut. Sealed very well. The Sinclairs still own the chapel and refuse to let anyone go digging up their ancestors (who can blame them?), as this would necessitate tearing down the whole chapel. 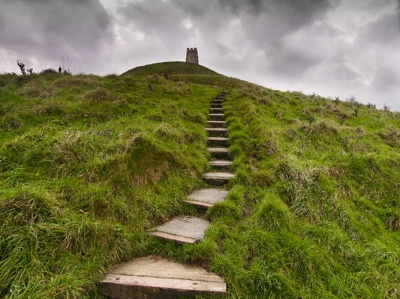 Tor is Celtic for “conical hill,” and that is what Clastonbury Tor is. It is said to be the legendary Avalon, King Arthur’s current resting place, while he heals from wounds suffered at the hands of his evil son, Mordred, whom he killed in a duel.

It has been called “Ynys yr Afalon,” Old English for “the Isle of Avalon,” since at least 1100 AD, and tradition states that in 1191, Arthur and Guinevere’s coffins were uncovered at the top of the hill. No evidence exists to support this, but the hill did serve as a fort since the 600s AD.

The Arthurian and Templar legends are inseparable, and the legend goes that the Templars returned from the First Crusade with all the famous Biblical relics, and hid them throughout the British Isles. The Grail was buried somewhere on Glastonbury Tor, perhaps between Arthur and Guinevere’s coffins, the most poetic place.

6
The Dome of the Rock
Jerusalem, Israel 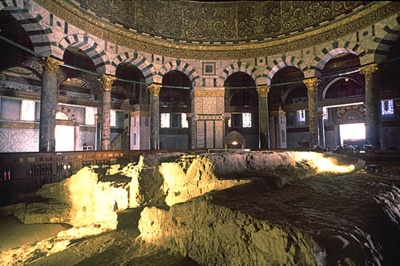 Legend states that since the Holy Grail was NOT the Holy Chalice, which is correct, it was buried with Jesus somewhere near his Crucifixion site. This site is believed by some to have been a fissure between two rocks, one of which has since eroded away, the other of which is still there to be visited, at the top of the hill on which the Dome of the Rock now sits.

It is sacred to all three monotheistic religions: Judaism holds that Abraham almost slew Isaac on this rock; Christianity holds that Jesus’s cross was planted between this rock and another; Islam holds that Mohammed sprang to Heaven on a horse from this rock.

The Holy Grail is, properly, the cup, bowl, or plate that happened to be near the Cross and catch the blood of Jesus as he died. It was then buried with him, by one of his Disciples, or by his mother, or Joseph of Arimathea, in his tomb. The location of his tomb is not known, but is described in the Bible as nearby, which likely means somewhere on or around the hill. 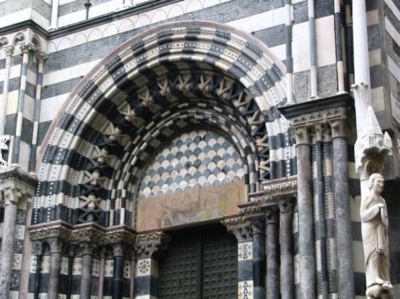 The Grail may not be lost, but found, and on display to the public for free at the Cathedral of St. Lawrence, in Genoa. This relic is a bowl made of green glass, which was thought to be emerald, until it was broken in the time of Napoleon.

No one knows where it came from, but William of Tyre, in 1170, writes that it first turned up in a mosque in Caesarea, Israel, in 1101. It has not been carbon dated. 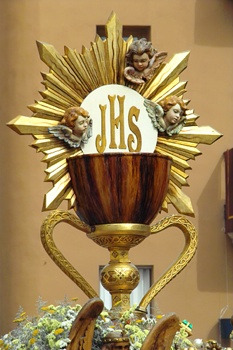 Another contender is on display at the Cathedral of St. Mary in Valencia, and this is considered the most likely. Skeptics claim that IF the Grail even exists, the Valencia Chalice is the best bet. It was carbon dated in 1960 to a date of somewhere between the 300s BC and the 100s AD, manufactured in the Middle East, so it is possible. Even if it isn’t the Grail, its age makes it extremely valuable.

It is made of dark red agate, and set in a gold stem, with another, upturned bowl of chalcedony as the base. It is the official Chalice of the Roman Catholic Church. 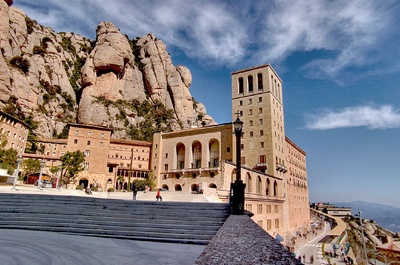 This legend ties in with the German Grail legend of Munsalvaesche, which is another name for Corbenic, the castle where the Fisher King lived, and where Sir Galahad was born.

“Munsalvaesche” is German for the Latin phrase “mons salvationis,” “the mount of salvation.” “Montserrat,” however, is Catalan for “jagged mountain.” The monastery and abbey are nestled in the mountain, and the Grail is said to be hidden somewhere under the church grounds, or elsewhere on the mountain. If so, it may well never be found, as the terrain is extraordinarily rugged and the mountain is gigantic. The peak, at 4,055 feet, is called
Sant Jeroni, “Saint Jerome,” who features prominently in several Grail legends. He may have traveled to the area in the late 300s AD and hidden the Grail there.

2
Somewhere in the Jerusalem Sewers 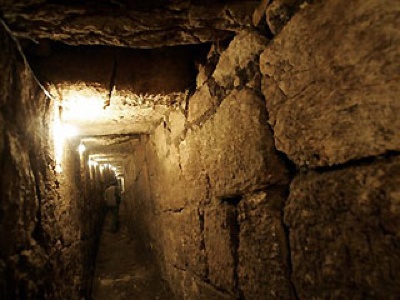 Not the same legend as that of #6, this legend states that the Knights Templar, of the First Crusade, never found either the Grail or the Ark of the Covenant, because the sewer system provided the finest hiding place on Earth at the time. Jerusalem has been attacked many times, and the Jews living at the time of the Ark’s disappearance from the Bible are sure to have lowered it into the sewers to protect it from Nebuchadnezzar, in 586 BC.

The Disciples may have known the location of the Ark and hidden the Grail with it, deep in the sewers, since the Ark had escaped notice for almost 600 years by then. Digging is expressly forbidden except for those professional archaeologists intent on uncovering sites of antiquity, not relic hunters. Digging may undermine the buildings above. 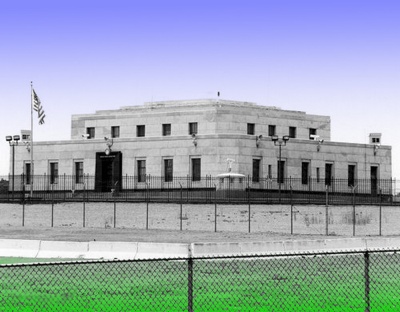 Yes, you read that right. This legend is based on the premise that the Bullion Depository is probably the single most secure place on the planet. Some of its security measures are a mystery, but it is known that no one, not even the President, is allowed on the property, except the U. S. Mint Police stationed inside.

The closest anyone can get to it is Highway 31, about 400 yards from the building. The security consists of multiple fences, the innermost electrified, alarms, cameras, armed guards, and the nearby Fort Knox units: 30,000 active troops who train every day with Apache helicopter gunships, M-1 Abrams tanks, armored personnel carriers and heavy demolition.

This doesn’t account for the unknown security measures, which probably include motion-activated minigun turrets, landmines, pressure sensors, snipers, and that’s before you even get inside.

Awful lot of security for some gold bricks, wouldn’t you say? Unless there are other things inside. The combination to the vault is not known by any one person, but is comprised of 10 combinations, each known by only one official working in the building. There are pistol ranges inside, a gym and dojo, and the vault is lined with solid granite. The gold resides in separate, small rooms each fitted with a solid steel door.

The main vault door is 22 tons of steel and can withstand a direct hit from a 2 kiloton nuclear warhead. The Depository has housed a copy of the Magna Carta, the Hungarian crown jewels, the Crown of St. Stephen, the U. S. Constitution, the Declaration of Independence, and various other historical documents from all over the world.

The legend states that there is a special room somewhere in the vault that does not house gold or artifacts such as cited above, but houses, instead, the Holy Grail, the Ark of the Covenant (complete with a “Do Not Touch” sign), satellite pictures proving that the Ararat Anomaly is Noah’s Ark, and the True Cross, complete with dried blood that has been analyzed as consisting of several strains of DNA, one of them encoded not on a double helix, but a triple helix.