Death, dying, and decay are subjects that we just can’t help loving. Perhaps it is our own mortality that makes these eerie topics so fascinating or maybe it is just the fact that we can be glad it is someone else who is dead and not us (yet). Regardless of the reasons here is another good old death-related list for your reading pleasure. Memento Mori (remember, you shall die). 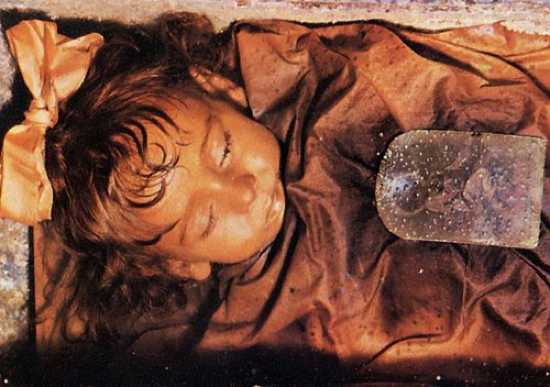 Mummies have a bit of a bad rap when it comes to attractiveness. If Mumm-Ra is anything to go by they all need a bit more than a quick crop on Photoshop. But little Rosalia Lombardo takes the mummy mold and smashes it to pieces under her tiny infant feet. Rosalia died of pneumonia in 1920 at the tragic age of two. Her father, understandably, wanted her memory immortalized and paid embalmer Alfredo Salafia to mummify Rosalia for all the world to see. Salafia set to work, replacing Rosalia’s blood with formaldehyde; drying out her skin with a mixture of alcohol and glycerine; and fending off fungus with salicylic acid. The effect is quite arresting and frankly you’d be forgiven for mistaking Rosalia for a little girl who’s simply fallen fast asleep – albeit in a hermetically sealed glass case swimming with nitrogen gas. 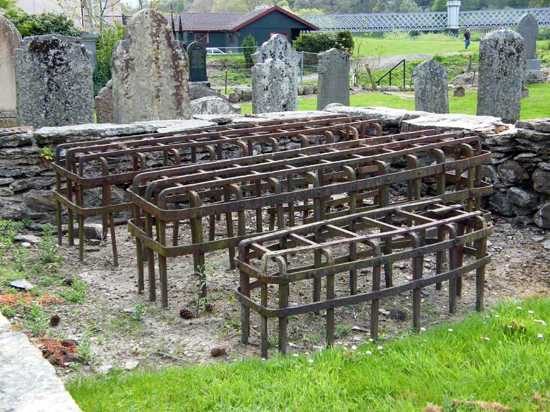 Victorians. What a wacky bunch they were. When they weren’t swanning around the seaside in full body swim suits they were sipping turtle soup, enjoying their tenth meal of the day. But when they weren’t doing either of those things they were, evidently, putting cages over burial plots. But was this weird act to keep the dead from getting out or to keep the gravediggers from getting in? Rather disappointingly mortsafes were exactly that, ‘safes for the dead,’ placed over plots to deter robbers looking to sell body parts to local medical intuitions. Shame. The Victorians could have done with a bit of zombie in their lives. 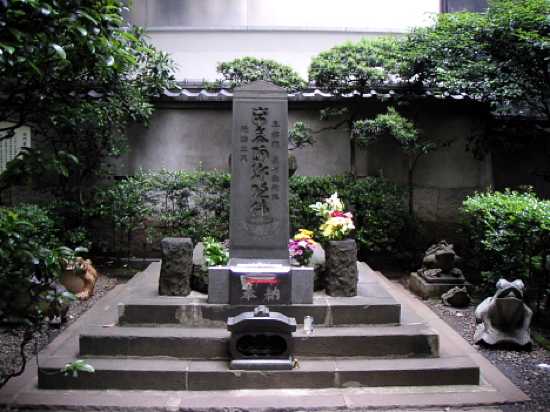 Samurai during his life, demi-god after his death, Masakado has left a deep mark on the story of Tokyo city. A Heian Period samurai, Masakado led one of the largest rebellions against the Kyoto-based central government. Sadly, for his sins against the state, he was decapitated in the year 940. However Masakado – and more specifically, his head – didn’t go quietly. It is said his head didn’t rot for three whole months and throughout that time, both his eyeballs were rolling about like a high scoring pinball. Eventually, the head was buried in what is now Tokyo and the hero subsequently became a legend. A praise, perhaps, born out of fear – for it is said that should the grave of Masakado be disturbed, a natural disaster will befall the land. Ever the superstitious, the Japanese authorities ensure the memorial site is permanently maintained rendering it as possibly the most pristine thousand-year-old gravesite in the world.

Upon first glance there’s nothing particularly eerie about this normal headstone but take a closer look and you’ll see that this is a headstone with no run-of-the-mill inscription. “Victim of the Beast 666.” Not the sort of epitaph most people would want you’d imagine? However, the beast in question is not Beelzebub. It is, rather bizarrely, the US government. The surviving husband of Lilly, Elmer Gray, was vociferous to say the least in his hatred for the law and any other governing body and he blamed them for the death of his wife for reasons nobody seems to know. 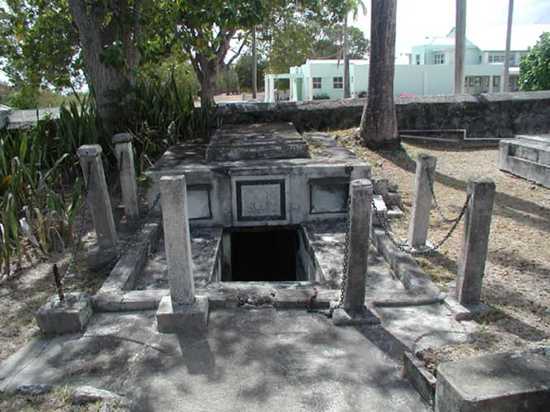 Lovers of the BBC hit TV series Jonathon Creek or crime writer John Dickson Carr will know all about the thrill of a locked room mystery. But here’s one which has had ghost hunters clambering over their motion sensors for a many a moon. When Thomas Chase was laid to rest in the family crypt in 1813 the gravediggers opened the tomb to a scene of some discord. All the coffins had shifted around the room and this in a crypt which hadn’t been opened since the death of two year old Mary Ann Chase in 1808. Nothing had been removed from the coffins and the seal on the large marble door, a cement seal no less, showed no signs of having been previously broken. As an act of respect, the coffins were placed back into their original positions. Fast forward to 1816 and the death of eleven year old Charles Brewster Ames and the tomb is opened once again. Again, the coffins had been tossed about, none less than Thomas Chase’s heavy lead coffin which it had taken eight men to place into the vault. By now every time the crypt was opened locals gathered for the ensuing ‘show’ and so when Lord Combermere, Governor of Barbados, witnessed the bizarre ordeal for himself in 1819 he ordered an investigation. Sand was placed on the floor of the crypt to catch the footprints of any grave robbers, the walls were meticulously checked for secret passages and when the tomb was eventually shut once again, Combermere had his own personal seal imprinted on the cement surrounding the door. Less than a year later, Combermere ordered the vault to be opened and once again, without even a hint of tampering to the seal or in the sand, the coffins were strewn all over the place, some even standing vertically, and another found halfway up the stairs to the door. Combermere had seen enough and he ordered the coffins to be removed and buried elsewhere and the crypt was subsequently abandoned and remains so to this day. 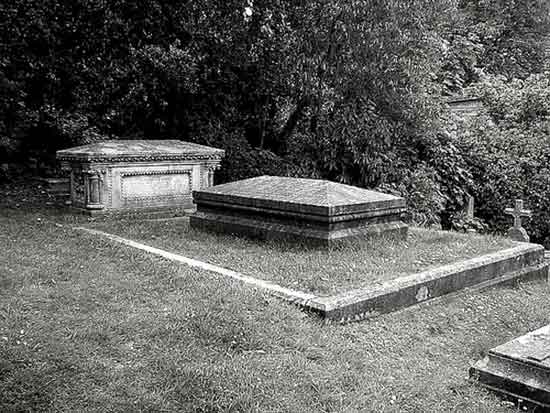 You love your partner, correct? Of course you do. But would you want to be buried with their heart, wrapped in a piece of crisp A4? No. Didn’t think so. You’ll do anything for love, but you won’t do that, right? Well, stand up Mary Shelley. When the body of her husband Percy Bysshe Shelley was cremated on the the beach at Via Reggio in Italy in 1822 (after a tragic sailing accident) witnesses, among them fellow Romantic Poets Lord Byron and Leigh Hunt, said the heart refused to go up with the sinew and bone. Days later Shelley’s ashes were buried in the Protestant Cemetery in Rome but upon his return to England, Hunt delivered Shelley’s heart home. Mary kept her fallen lover’s ticker in the top drawer of her desk until her death in 1851 upon which the heart was wrapped in an early manuscript of Adonaïs: An Elegy on the Death of John Keats, Author of Endymion, Hyperion, etc. (to give it its full title) and placed in the coffin alongside Mary. Being buried with body parts seems somewhat fitting for the creator of Frankenstein, don’t you think? 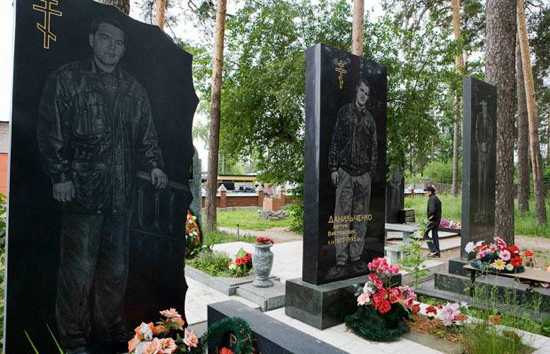 Once home to a vicious turf battle between two rival Russian mafia gangs, the cemetery in Uralmash, the industrial quarter of Yekaterinburg, houses many a dead Mafioso. Walking around the gravestones you’d be forgiven for feeling watched because pretty much each grave is accompanied by a life-size portrait etched into the granite headstone, a kind of police line up of ex mob men. Alexandr Khabarov, leader of one of the 1990s gangs, is buried here, adorned not only with the obligatory imposing bust but also with a CCTV camera guaranteeing 24-hour, all year round, surveillance. Not the best grave to steal the flowers from then. 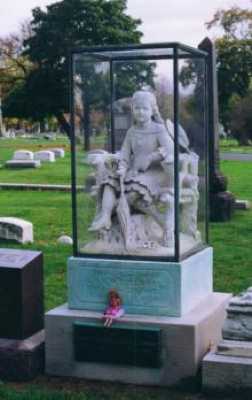 Inez Clarke was a six-year-old girl struck and killed by a bolt of lighting in 1880. On top of her grave is a life-size sculpture of Inez, seated on a bench, wearing a lace dress and holding a parasol and a flower. The artwork was commissioned by her parents and is in a large protected Perspex box. Pretty normal so far, right? That’s until you take a family trip to the cemetery – unlikely perhaps but Sundays can be awfully boring – and your kids tell you they’ve playing with a young girl dressed in ‘old-fashioned’ clothes. 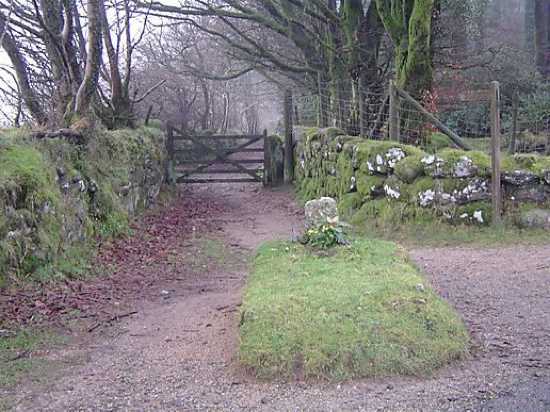 Colloquially called Jay’s Grave this rather nondescript mound of grass has been baffling Devonians for years. Thought to be the resting place of a suicide victim of the late 1700s the grave situated within the eerie depths of Dartmoor has become a cult haunting spot for ghost-chasers. Due to the religion led ignominy towards ‘self-murder’ in the 18th century, Kitty Jay was denied a church plot in consecrated ground and instead was buried at crossroads so that her spirit would remain confused and never be able to find its way to the afterlife. Someone somewhere certainly has sympathy with Kitty because fresh flowers are regularly placed on the grave and despite numerous investigations, paranormal and otherwise, no one has ever come claimed responsibly for the frequent floral tributes. 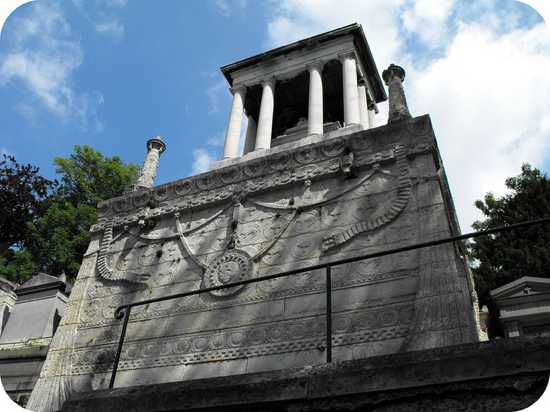 Not a well known grave by Père-Lachaise standards which houses the eternal resting place of Jim Morrison, Edith Piaf and Oscar Wilde to name three. This princess of Russian nobility married the First Prince of San-Donato in a loveless marriage. One of the richest women of her generation Demidoff died slightly unhinged to say the least. In her will she challenged any one to a pretty hefty chunk – think lottery Millions – of her fortune if they could spend a week inside her mausoleum without going crackers. Many have tried, many have failed and the fortune remains unclaimed.