Scandinavian Folklore consists of many creatures, good or evil, which have frightened people for centuries. They were often meant to scare children, but they are essential and important to modern northern society even today. In the 1890s, something changed in the way common Scandinavians saw themselves and their culture. They looked back in time to rediscover their old myths and legends, folklore which had been forgotten because of the coming of Christianity. It was a time when people feared nature because we were becoming more industrialized. The forests, mountains, and sea all seemed strange, dark, and magic, and because of that, we are now left with evil spirits and monsters who represent our own way of seeing nature. 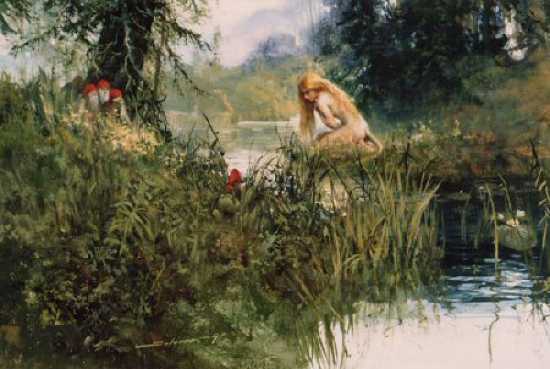 Huldra (or called Tallemaja in Swedish) is a troll-like woman living in the woods. She is fair and beautiful but wild and has a long cow-tail that hides behind her back upon meeting a human. It is said that Adam and Eve had many children and that one day, when Eve was bathing her children, God came to visit. Eve had not finished bathing all of her children, and so hid those who were still dirty. God asked: “Are there not more children?” and when Eve said no, God said: “Then let all that is hidden, remain hidden,” and the hidden children became De Underjordiske (the ones living underground), lost souls who live under the surface of the earth, calling for someone to be with them, usually human passersby. Huldra was one of them, but she somehow remained above the ground. She is a flirtatious young girl who is neither good nor evil. 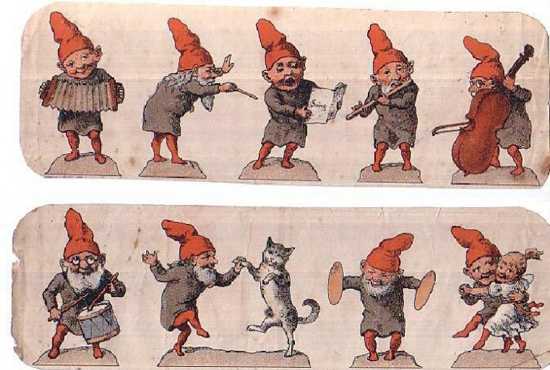 These beings are actually still very important in modern society. There is no Santa in the shape of a fat, bearded guy who lives at the North Pole in the Scandinavian Christmas tradition. Instead, we each have our own Nisse, living in the barn (that is to say if you are a farmer or living in the countryside), like a household guardian. These creatures are typical pranksters but can easily be befriended, and around Christmas, they have the same function as Santa in Western traditions.

Made famous by J. R. R. Tolkien, the dwarves and the elves originate from Norse Mythology. The dwarves lived in their own part of Midgard, a place no human could find. They were small people, often pictured as little men with long beards, who were master smiths, and made the swords, shields, and armor for the gods themselves. The elves lived in a deep forest nearby the castle of Frøy, the god of fertility, called Alvheim. They were fair and beautiful and commonly seen as peaceful creatures. 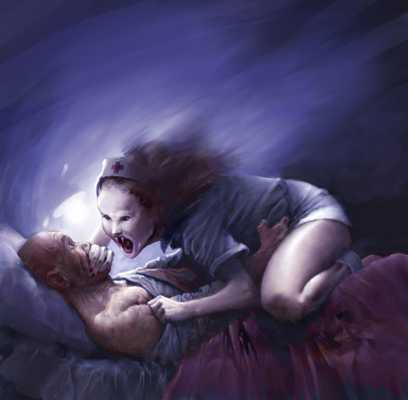 Mare is a female Vette who gives people bad dreams at night by sitting on them in their sleep. She is a common belief in Germanic folklore and appears in many different shapes. The Scandinavian words for Nightmare are Norwegian – Mareritt, Danish – Mareridt, Swedish – Mardröm, which directly translated means Mare-ride and Mare-dream. 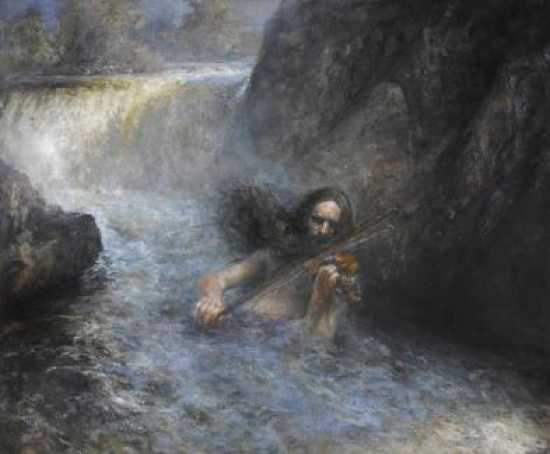 Fossegrimmen, or just Grim (Foss is Norwegian for Waterfall), is a water-creature. He is a young, handsome man who sits naked under waterfalls, playing the fiddle. He plays the music of nature itself; the sound of the water, the wind in the trees, it all comes from his music. He teaches humans how to play if they secretly brought him a stolen piece of meat. Torgeir Augundsson (1801-1872), better known as Myllarguten, was a famous fiddle player from Telemark, Norway, who was so good it was rumored he had sold his soul in exchange for Fossegrimmen’s skills. 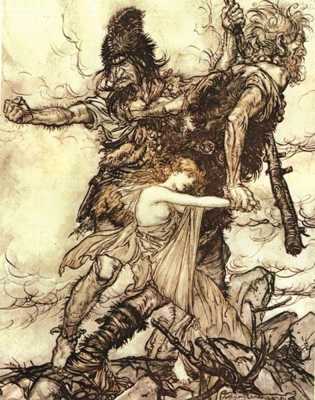 The troll comes from Norse Mythology, inspired by the cruel giants who were the main enemies of the gods, known as jotner/jotuner/jötunn, who lived in the mountains of Utgard. They have a human-like appearance, but they are incredibly ugly and huge, and every story about them tells of how stupid they are. There were trolls of all kinds in the old tales, some living in the high mountains, in castles carved out of the stone, in deep forests, and some even by the shore. Upon the arrival of Christianity around the 1300s, the stories changed. The trolls were able to smell the blood of a Christian man, and basically, they stood for anything of the old times, which the new religion condemned. Oh, and if they ever came in contact with sunlight, they turned to stone. 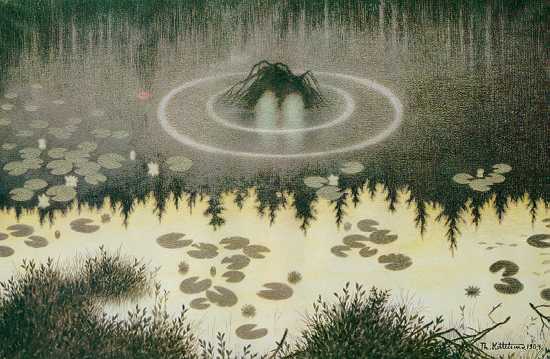 Nökken/Nyk/Nykkjen is a mysterious water creature residing in freshwater, lakes, and deep ponds. He is, in Norwegian tradition, described as a dark monster with his eyes just above the surface, watching as people walk by. He is a beautiful young man in Swedish tradition, tricking women into jumping into the water and then drowning them. He is a shapeshifter and can change into a white horse, letting young children ride on his back and then jumping with them back into his pond. He is also said to be a talented musician, playing the violin so that the villagers can hear him at night. There were ways to protect oneself from him; you could throw a piece of metal into the water, like a needle or an iron cross, and so save yourself. If he had already attacked, you could overpower him by saying his name. “Nyk! Nyk! Naal i vatn. Jomfru Maria kastet styaal i vatn! Du sæk, æk flyt!” was a riddle for protection, meaning: “Nyk! Nyk! Needle in the water. The Virgin Mary threw steel in the water! You are sinking; I float!” 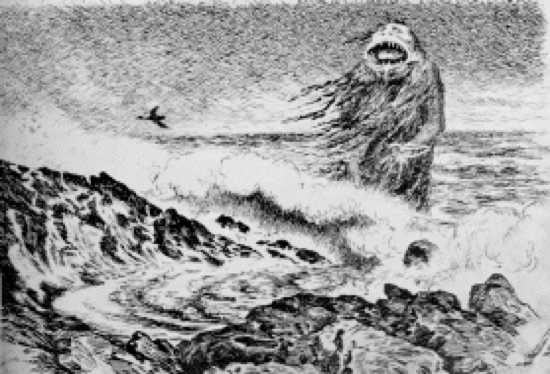 Draugen, from Norse “draugr” meaning ghost. Yet another water creature, this one is something you really wouldn’t want to meet when you’re out in your boat. Draugen is the ghost of a man who died at sea. He is huge and monster-like and covered in seaweed, rowing in half a boat. He erupts a terrible scream when he appears, and legend has it he can be seen during stormy nights at sea, drowning sailors and fishermen and sinking their boats and ships. There is a story of a man who once ran from Draugen and into a churchyard, where he shouted for the spirits of the dead to protect him. The day after, all the graves were open, and the churchyard was covered in seaweed. These days, Draugen is commonly associated with anything dark and mystical about the sea. 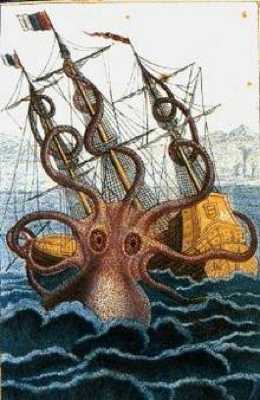 Kraken is probably a creature most people will recognize. It’s been used in several movies, like Pirates of the Caribbean and Clash of the Titans, but originally, the Kraken belongs in the cold Norwegian Sea, where it was first said to be seen in the early 1700s. The first detailed description was made by the Danish writer and biologist Erik Pontoppidan in 1752. In old times, the Kraken was said to be in the shape of a huge crab, the size of an island, and many sailors and fishermen found themselves stranded on an island that had not been there minutes before. Later descriptions tell of a monster in the shape of an enormous octopus, which dragged ships down to the bottom of the sea. 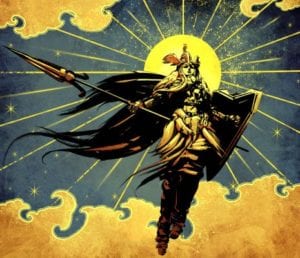 In the Norse belief system, valkyries were supernatural women who determined who lived and died on the battlefield. Subsequently, they would take a select group of the slain warriors on horseback to Odin’s hall, Valhalla, where they would join the einherjar, the exclusive entourage fighting for sport during the days and feast at night. The Edda, a textbook about Norse mythology written in the 13th century by the Icelander Snorri Sturluson, claims that the valkyries served drinks to fallen warriors in Valhalla. But older sources, which are closer to what the Vikings thought and believed, usually emphasize the valkyries’ warlike aspects and their agency over life and death. Viking poets refer to them as “sword girls,” “spear maidens,” and “goddess of the spear/sword.”