The femme fatale, or ‘deadly woman’ – whose beauty leads men and even nations to ruin – is a theme as popular today as it has ever been. The image of mysterious, alluring femininity seeking its own way – regardless of the consequences – has captivated audiences for thousands of years. Whether goddess or mortal, men will fight, die and tear empires apart for her; they then blame her – often burning her at the stake for her efforts. The almost supernatural skill with which she captivates her victims has prompted men to variously describe her as a demon, a witch, or even a vampire. 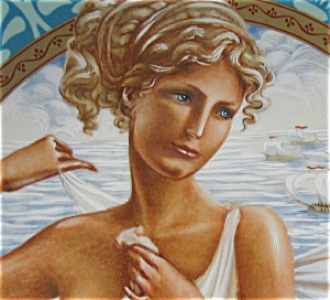 This legendary Spartan beauty was said to have been born when the god Zeus, taking the form of a swan, descended from Olympus to seduce her mother Leda. At the age of ten she was abducted by Theseus, but her brothers came to her aid and rescued her. Tyndareus, her earthly father, made each of her princely suitors swear an allegiance to the man he chose for her – Menelaus.

So it came to be that when Paris, prince of Troy, kidnapped her, all the oath-bound princes went to war in support of Menelaus. The princes and their men besieged Troy for ten years, until Helen was rescued and restored to Menelaus. After an attempt on her life, she was taken to Olympus by the god Apollo, where she joined the Dioscuri as an immortal. 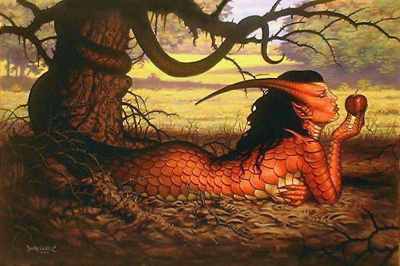 This daughter of the Phoenician priest-king Ethbaal married the Hebrew King Ahab and convinced him to deny the Hebrew god Yahweh (Jehovah) in favour of the Tyrion Baal. When she had the prophets of Yahweh slain, the prophet Elijah accurately prophesied severe draught as divine retribution. Jezebel forced Elijah to flee for his life. Elijah told her husband, Ahab, that both he and all his heirs would be destroyed, and that Jezebel would be devoured by dogs.

After surviving Ahab’s death, Jezebel defied the prophet Elijah and died – but Elijah got his own back when dogs devoured most of her body. Jezebel’s name remains the embodiment of a vicious and vile woman. 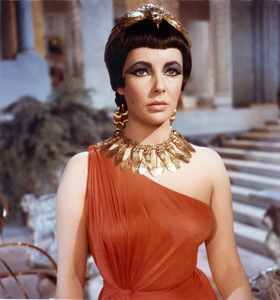 Having been denied the throne after her father’s death, Cleopatra tried to regain her throne through seduction. In 48 BC, Julius Caesar arrived in Alexandria: a year later she bore him a son and followed him to Rome, where he was famously murdered by assassins. Returning to Egypt, she aided the Roman heroes (Augustus, Lepidus, Mark Anthony), gaining such influence over the latter that he abandoned the Roman cause to be with her. She bore him three children. When Antony was defeated by Augustus at the sea-battle of Actium, he and Cleopatra fled together.

When he heard rumors of her death, the besotted Anthony stabbed himself – dying in Cleopatra’s arms. Failing to seduce Augustus, she killed herself with the bite of a snake. Popularly thought to be Egyptian, she was in fact Macedonian like Alexander the Great. Yet the myth of Cleopatra, queen of the Nile, whose beauty besotted great men, lingers. 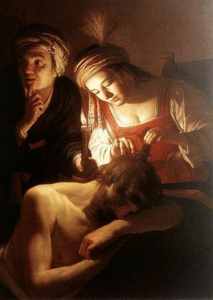 Samson was the mythical hero and leader of the Hebrews. Granted supernatural strength by the Lord, an angel told his parents that his hair should never be cut or shaved, as his strength would be lost. Samson defeated the Philistines – enemies of the Hebrews – time and time again, even killing a lion with his bare hands. Thus Samson seemed invincible: unfortunately for him, he fell in love with a girl called Delilah.

Under the instruction of the Philistine kings, Delilah had Samson’s hair cut while he slept, and thereby caused his ruin. His eyes were pierced out by his enemies, and he was forced to to work like a slave. Though we never learn what finally became of her, to this day every “Delilah” is considered a poisonous, dangerous seductress. 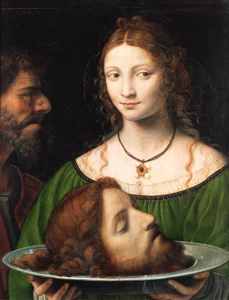 The Gospel of Mark tells how John the Baptist died through the wiles of Salome, daughter of Herodias, wife of Herod. Despite imprisoning John for causing disturbances, such as the baptism of Christ, Herod both respected and feared him. Herodias hated John for calling her marriage unlawful, but Herod refused to harm him. Herodias therefore brought in the irresistible Salome to dance before the king: she so pleased him that he vowed to give her whatever she wanted. She had been instructed by her mother to ask for the head of John, and Herod could not refuse her. A guard, sent to decapitate John, returned with the prophet’s head on a dish. Salome then gave this to her mother. 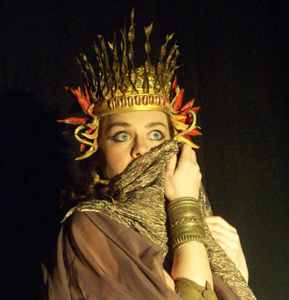 A pre-Homeric Greek Ballad, the Argonautika, tells us the story of Medea. The daughter of King Aeëtes, she fell in love with Jason. When the king, betraying Jason and his Argonauts, sent an army to attack them, Medea used her magic to pacify a thousand-coiled guardian dragon and even killed her own brother to help them escape. Later, she craftily persuaded the daughters of Pelias to dismember their father and cook him in a cauldron – hoping that she could thereby restore her own fading youth. When Jason deserted her for another, she sent the new woman a robe that consumed her and all others present in fire, including Medea’s father. The infamous wrath of Medea even extended to her own children: she the throats of all fourteen she shared with Jason. 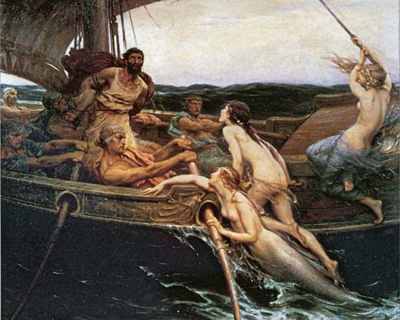 The original stories tell us that the sirens were daughters of the river-deity Achelous. Their names meant beautiful face, beautiful voice, white being, music, maiden face and persuasive face, and so on. It is said they challenged the muses to a musical duel but were defeated, and so abandoned the forest rivers for the rocky shoreline of southern Italy, perching there and luring sailors to their deaths with their songs and their beauty.

When Ulysses (Odysseus) left the enchantress Circe on his homeward journey, she warned him that he should ask his crew to fill their ears with wax while they rowed past the rocky shores where these creatures lived. Ulysses, wishing to hear the fabled sound of the sirens, ordered his crew to tie him – ears unblocked – to the mast. The crew followed their orders, and even though the sirens begged Ulysses to stop and come to them, the danger was averted. 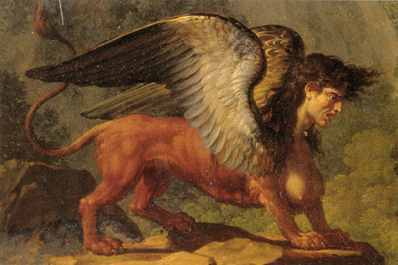 The epitome of mystery, in Greek myth she is said to be a daughter of Orthus and and Chimaera. An enigmatic she-monster, with a woman’s head and breasts, a lion’s body, a serpent’s tail and an eagle’s wings, the Sphinx was sent by Hera to punish the people of Thebes. She settled on Mount Phicium, next to the city’s entrance, where she presented all passersby with a near-impossible riddle. If they could not answer correctly, the Sphinx would devour them.

The ruler of Thebes, horrified by the slaughter of his citizens, offered his crown to any man who could kill her. Oedipus – a famously clever Greek traveller – stood up to the challenge. When he solved the Sphinx’s riddle, she threw herself off the side of the mountain in defeat, just as the oracle prophesied. In alternate endings, she is also said to have devoured herself. 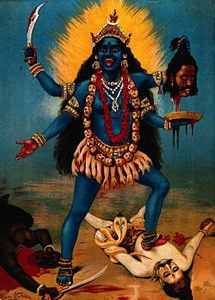 This fierce Hindu goddess (her name means “Black”) is voluptuous but horrific. We all know that nothing lasts forever – according to the legend, this is because everything is destroyed by Kali. Human blood drips from her three blazing eyes; her tongue hangs out to lap up the blood of her victims; snakes writhe about her neck, and her black body is festooned with chains of human skulls. In each of her ten hands she grips a weapon. Victims are sacrificed in her rites, the Durga-puja. She excels in killing, ignoring every plea for mercy. When her husband Shiva lay down among her victims, she decapitated him and danced on his body. Her Celtic equivalents are the Scottish Cailleach and the Irish Morrigan. 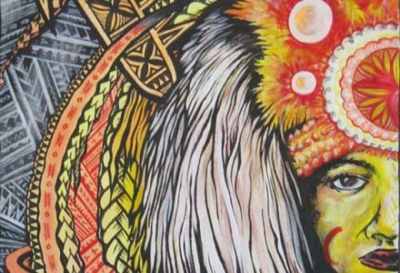 King Solomon, hunting in the Egyptian desert, met a beautiful naked woman who demanded to know why he was hunting on her land. When she claimed that no man could defeat her, Solomon asked her, ‘who, then, can defeat you?’ She replied that only the archangel Michael could do so. Solomon invoked Michael, whose shining armor so scared her that, instantly becoming old and grey, she identified herself as the fearful demon Karina.

Mother of Dead Children, Sender of the Evil Eye, Bird of Illness, a look from her was said to stop cows from calving, ewes from lambing, and crops from growing. It was even supposed that her glare would dry up the seeds of husbands. Originally human, she had eaten her own children in order to gain magical powers. She was condemned to bear only dead children – and any woman to whom she showed her bloody pudenda, would suffer the same fate. Any human who set eyes on her fell sick at the very least. That, she told Solomon, was fate.