Taste buds are certainly sensitive things. Mark Twain must have known this, when more than a hundred years ago he waxed lyrical on the watermelon:

“The true Southern watermelon is a boon apart, and not to be mentioned with commoner things. It is chief of this world’s luxuries, king by the grace of God over all the fruits of the earth. When one has tasted it, he knows what the angels eat. It was not a Southern watermelon that Eve took; we know it because she repented.”

We’ve been praising luxury foods for a long time now. Here are ten cases of salivation being worth much, much more than its weight in gold: 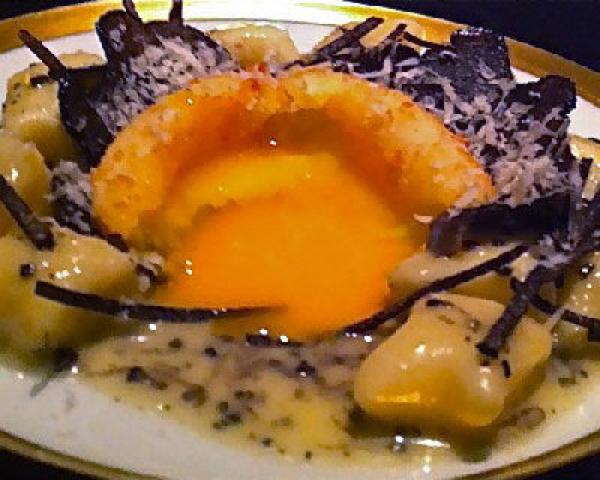 The Aracauna is a chicken originally from Chile that lays a blue egg. The Tocqueville, in New York City, serves a single one of these eggs, soft-poached, on a plate with risotto (creamy Italian rice) and your choice of tagliatelle noodles or handmade gnocchi (dumplings usually of flour, potato, or cheese). The dish sells for $100, because the egg is liberally garnished with purple Perigord truffles (see #4). 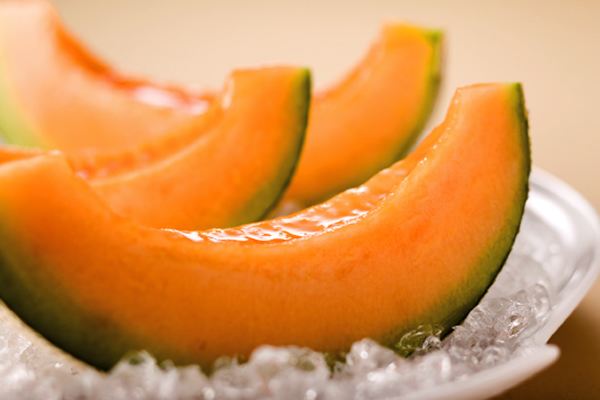 The Yubari King melon is a cantaloupe hybrid, bred from the Earl’s Favorite, and the Burpee, or spicy cantaloupe. The hybrids are only grown in greenhouses in Yubari, on Hokkaido Island, Japan. Their taste is a perfect mix of the mellow, juicy Earl’s Favorite, spiced up with extra sweetness from the Burpee. Its taste has been described as cantaloupe on the front of the tongue, watermelon on the middle, and a long pineapple aftertaste.

You can cultivate this hybrid yourself, but you may not call it a Yubari King unless you cultivate it in Yubari. An average melon sells for $50 to $100, but the first, and perfectly spherical fruits of the year are auctioned as high as $26,000 each. 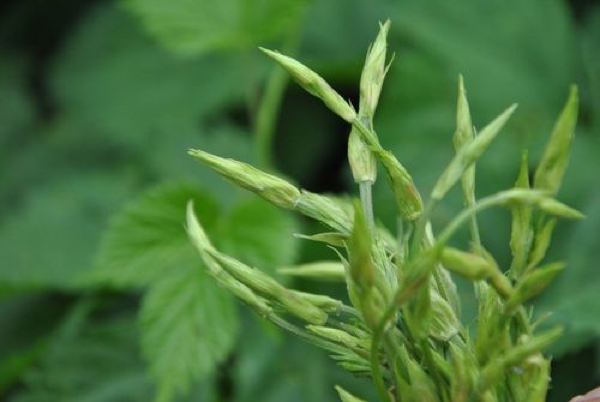 Hop flowers are used to make beer. Hop plants are farmed on trellises hooked to overhead wires. When they run out of trellis to climb, they put out horizontal shoots, which grow into bines (not vines), at the ends of which the flowers form. Hop shoots are among the fastest growing plants in the world, at 8 to 20 inches a week.

So if the shoots are to be harvested before they turn into flowers, they must be taken from March to April each year. The first harvests are so hotly anticipated that they are typically sold at auction, and average about 1,000 Euros per kg ($1,250 per 2.2 pounds). 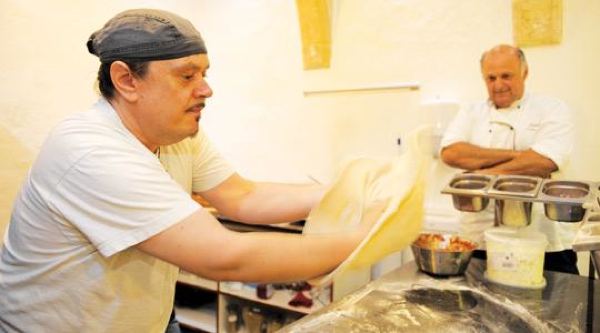 You can eat gold. It will not nourish you, but it’s perfectly harmless, as long as you don’t choke on it. So for the wealthy, it is the ultimate expression of the word “rich.” Margo’s Pizzeria, in Malta, sells a pizza topped with white truffles and garnished with gold leaf. Truffles are the above-ground fruit of mushrooms, while the rest of the mushroom remains under the soil. White truffles, Alba madonna, are the most expensive in the world, since they are extremely rare and difficult to find, and have a complex taste described by one critic as, “like mold. Garlic. Natural gas. Cheesey. Oniony, but not oniony. Cabbagey. Earthy. Heavenly.”

Margo’s slices up several to top the 14-inch pizza, with “mozzarella formaggio di bufala Campana,” that is, “mozzarella cheese made from the Campanian water buffalo.” These buffaloes roam the west coast of Italy from Rome to Campania, especially around Naples.
Margo’s then sprinkles 24-carat gold flake over the pizza. They advise the customer not to have tomatoes on the pizza, since their acid destroys the taste of the truffles. $1,800 Euros, as of 2011 (c. $2,400). 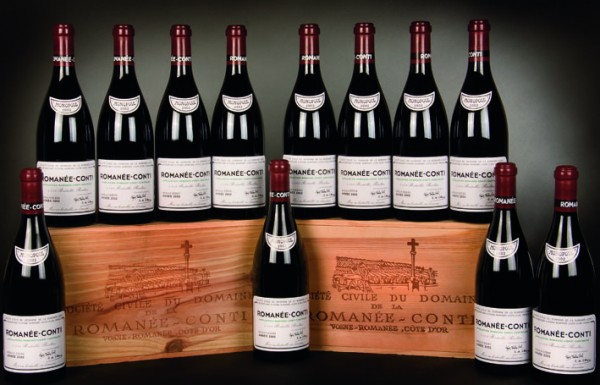 The title of world’s most expensive wine frequently changes, because wine is popularly thought of as a rich person’s indulgence. Some years, the title goes to Henri Jayer Richebourg’s Grand Cru, but the Domaine de la Romanee-Conti is certainly the most consistently high-priced and valued wine in the world.

The Domaine keeps its tasting notes under tight security, since the mere imagination of how one might taste may be sufficient to keep some rich people from shelling out cash for it, but a few secrets have leaked to the Internet: “the 2005 reds are young, tight and unevolved, yet their personalities shine nonetheless, with plenty of sweet red fruit, firm yet ripe tannins, subtle oak influence, electrifying acidity and a mouthfeel that is sensuous and smooth at first, wrapping itself gently around the palate, then bursting on the finish with succulence and refreshment. Take a sip, swallow, wait two minutes and the taste and texture remain. It almost literally sucks your tongue out of your mouth like Cupid at his most playful.” 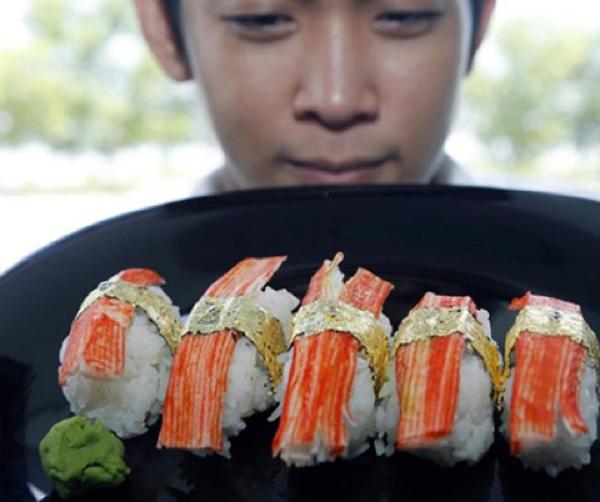 The chef advertises this as the world’s most expensive, but the only information this lister could find on it is now 2 years old. He has likely thought up an even more expensive roll since then, but even so, this one will set you back $1,971 for 4 pieces. From his Facebook page: “12-year-old, Italian balsamic vinegar, Japanese rice, 70-year-old virgin water, Muscovado sugar, Norwegian pink salmon, pink salmon roe, cucumber, mango, foie gras, sea cucumber (smoked then pickled and steamed ’til tender sticky), genuine crabmeat, wild saffron, mayonnaise with butter, 12 local Palawan pearls and 4, 0.20-carat African diamonds of VVS clarity.”

VVS is one grade worse than “flawless.” The pearls are about the size of garden peas, and can be eaten, or you can keep them for resale. What Araneta doesn’t mention is that each piece is wrapped in 24-carat gold leaf. 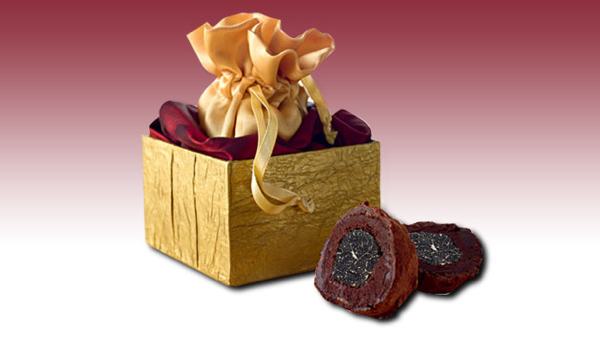 A chocolate truffle is not usually a mushroom, but simply a small chocolate-covered ganache – though cream and jelly fillings are common. The most well known in America is probably the Cadbury egg.

The Madeleine Truffle actually uses a real mushroom truffle as its center, the rare Perigord. These truffles are named after the Perigord area of the northern part of the Aquitaine in southwestern France, where they grow, and they retail for about 3,940 Euros per kilogram. That’s about $5,122 for 2.2 pounds. This Perigord truffle is dipped in 70% dark Valrhona chocolate, with sugar, heavy cream, Indonesian vanilla, and pure Italian white truffle oil. This is the ganache into which the perigord is rolled. Then it is dusted with extra cocoa.

Knipschildt, a Master Chocolatier in Norwalk, Connecticut, personally handmakes each truffle to order, at a price of $250 per 2-ounce truffle. That’s $2,000 per pound. He ships them from his storefront, Chocopologie, anywhere in the world within 14 days at no extra charge, and they are packaged in silver boxes with real silk ribbon, resting on beds of sugar pearls. Write 5 good lists for Listverse and treat yourself to a couple for a job well done (you know what? That’s exactly what I’m gonna do). 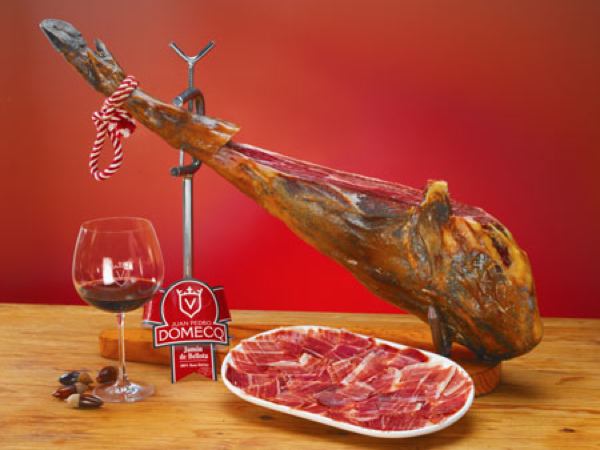 It is Spanish for “Iberian Acorn-fed Ham.” It comes from a small area along the Spanish-Portuguese border, where the black Iberian pig is raised on a diet of nothing but acorns. This imparts a pure earthiness to the meat, not sullied by the consumption of any kind of meat, or spoiled food. All other black Iberian pigs are fed barley, corn, and oats to fatten them quickly – and their meat is also expensive – but these special pigs are given a lifetime of free range in oak groves, where they walk or run around. This exercise strengthens the meat’s earthy flavor.

The hams, or hind legs, are salted for 2 weeks, then cured for 3 years. The Spanish prepare the meat by slicing it more thinly than bacon. It was not even exported to America until 2007, for no less than $96 per pound. One connoisseur described the taste as “absolutely beyond belief.” 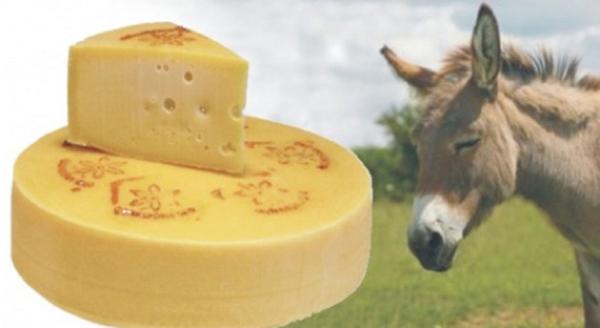 No, this is not a joke – at least not an intentional one. Donkeys produce milk just like cows and horses – and like any milk, it can be churned into cheese. The title may not sound all that appetizing, but its makers claim it is the most delicious cheese in the world, and they charge accordingly. It is only made from the 100 or so Balkan asses of the area around the Zasavica River, in western Serbia. The makers defend the price by reason of how much milk is required: 25 liters to one kilogram of smoked cheese.

One critic who tried it was “blown away by the power in the taste. A heavy nutty, sweet stir, strongly similar to leerdammer, on the front of the palate, finishing into a tomatoey saltiness like parmesan, that physically numbs the mouth and saliva glands.” It will set you back though, at about $700 per pound. 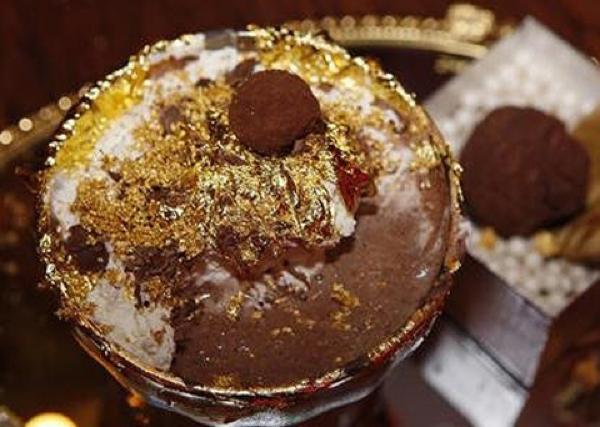 This dessert is sold exclusively at Serendipity 3, in New York City. The restaurant is famous for selling you anything you want, even the chair you’re sitting in. Everything in the building has a little price tag on it. They will not sell ownership of the restaurant, of course. They are known for their hot dogs and iced desserts, and invented the sundae in question in 2004.

You must give at least 48 hours’ notice when ordering one, so the ingredients can be acquired. Different sources report 3 and 5 scoops of vanilla ice cream. The vanilla beans are flown in from Tahiti and Madagascar, topped with 23-karat gold leaf, then drizzled with Amedei Porcelana, which touts itself as the world’s most expensive chocolate (this is most likely false – see #4).

The sundae is then suffused with candied persimmons, pineapple, peach, and currants, almonds dipped in gold, marzipan cherries and small blocks of criollo chocolate, which is farmed only on the Venezuelan coast. Then a fan of gold leaf is placed on top, along with a dash of gold flake, and a few sugar-paste floral garnishes that take 18 hours to sculpt. It is served with a 24-karat gold-plated spoon inlaid with real diamonds, which you get to take home along with the gold-lined, crystal goblet – all for $1,000.

In case you’re wondering: yes, you will defecate gold.