We like to think that, with our gadgets and technological wonders, we’re pretty far-advanced compared to where we were a few years ago. However, as you’re about to see, a lot of things that we take for granted aren’t really that new after all. For instance, consider… 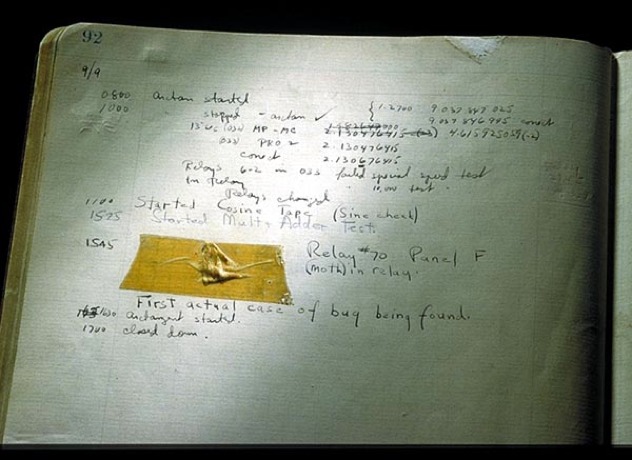 In 1947, noted computer scientist Grace Hopper discovered a dead moth trapped in a relay belonging to the recently-built Harvard Mark II electromechanical computer. On discovering the bug, it was removed and taped into a fault logbook, where a comment written below remarked that this was the “first actual case of bug being found”. Many people believe that this anecdote represents the first usage of the term ‘bug’ to describe a problem with a piece of computer hardware or software.

But, we know that the word was first used in relation to technology in the later years of the 19th century. In one instance, technological luminary (and plagiarist) Thomas Edison described in an 1878 letter to a friend that bugs were “little faults and difficulties”, whereas a later usage appeared in the 1896 textbook “Hawkin’s New Catechism of Electricity”, where the term is applied as meaning “any fault or trouble in the connections or working of electric apparatus”. Indeed, the term was definitely in common usage two years prior to the moth incident, as a review in a 1945 issue of Billboard Magazine described that (in regards to the product being reviewed), “there are still a number of bugs to shake out, but if we were a sponsor, we’d buy it fast”. 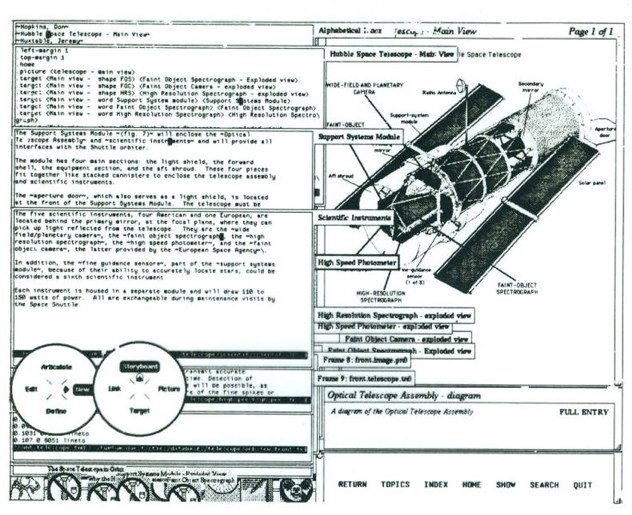 For a demonstration of what tabbed browsing is, look at top of this webpage. A tabbed browser allows internet users to have multiple webpages open at the same time and browse between them without the need to be constantly minimizing and maximizing them. It most recently shot to prominence with its use in Internet Explorer 7, released in 2006, a feature which soon caught on amongst the other web browsers. Hilariously, in early press coverage, Microsoft had the audacity to hail this as a revolutionary feature of IE7.

‘Hilarious’ because the first usage of tabs in a computer program took place in 1988 with the Unipress Gosling Emacs text editor. Of course, the two aren’t completely identical (in IE7, the tabs are linked by a horizontal bar, for instance), but the similarities are striking. The first tabbed web browser didn’t come about until the launch of the InternetWorks browser in 1994. This browser could support up to four separate webpages, however, unlike IE7 they were displayed simultaneously in a 2×2 formation. Following this, tabbed browsers became standard until 2003, until they inexplicably disappeared from the market. That is, until Microsoft ‘invented’ them three years later, of course. 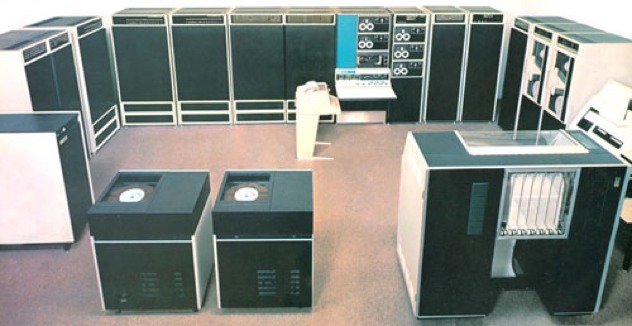 Nary has a month gone by without hearing about how a computer virus has heaped untold misery upon thousands and thousands of computer owners all over the world. Obviously, viruses are a modern phenomenon though, right? After all, the internet was initially developed as a tool for the scientific and military communities, and those professions hardly seem the sort to breed destructive hackers.

Destructive hackers, no. Pranksters? As it turns out, yes. In 1971, a virus known as Creeper infected the predecessor of the internet, ARPANET. It’s intention? According to its creator, Bob Thomas, it was to prove to ignorant bigwigs that the creation of such a potentially-malicious program was possible. It primarily infected computers running the TENEX operating system, all in a manner identical to the self-replicating viruses that are prevalent throughout the internet today. Once infected, the computer would then display the message “I’m the creeper: catch me if you can”. After the bigwigs got the message, however, it was time for the Creeper to die. And, thanks to the world’s first anti-virus program, known as Reaper, it did. 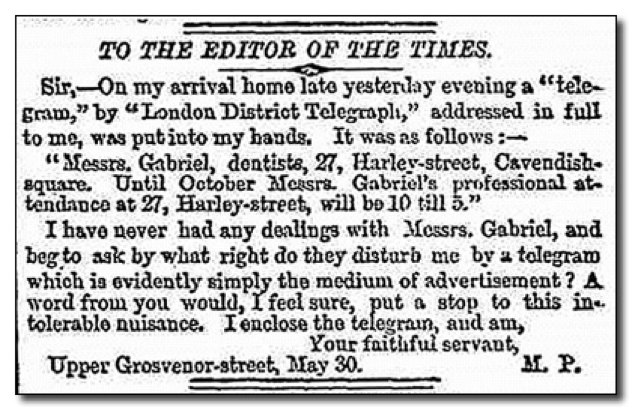 It’s not an understatement to say that spam is the bane of every person who owns an email account. After all, you’d think that if someone was in the market to buy counterfeit medicine or penis extension pumps, their first port of call wouldn’t be an anonymous poorly-worded email from some far-flung corner of the world. Not so. Enough people are obviously buying the stuff they’re peddling, or else spam wouldn’t equate for nearly 78% of all email sent.

If you’re looking for someone to blame for this phenomenon, then try Maurice and Arnold Gabriel, two dentists who, in 1864, sent hundreds of unwanted telegrams to people all over London advertising their services. The messages, which read ”Messrs Gabriel, dentists, Harley-street, Cavendish-square. Until October Messrs Gabriel’s professional attendance at 27, Harley-Street, will be 10 till 5″, infuriated countless politicians and noblemen whom had the messages delivered to them in the middle of the night. By way of ‘revenge’, they shamed the dentists by publishing the message in The Times, which provided them with more publicity than they ever have dreamed possible.

Online dating is undoubtedly one of the most popular activities on the internet, as evidenced by the massive growth of websites such as Match.com, eHarmony, and OKCupid. By November 2004, there are 844 dating websites, a massive number considering that (relatively) the internet wasn’t available to the vast majority of people. As well as furthering the longevity of the human race, it isn’t a bad money-spinner either. Figures from 2008 indicate online dating services brought in $957 million in revenue, a figure that had increased to over £2bn by 2012.

Those figures therefore make it easy to understand why people have been using machines to help sort out their love lives since 1957. It was in this year that esteemed relationship psychologist George Crane established the ‘Scientific Marriage Foundation’, a matchmaking bureau. During the application process, male and female applicants were asked to complete forms detailing their physical characteristics, occupation, and political/religious opinions, and to provide two letters of recommendation from key members of society (i.e. doctors, ministers) to vouch for their character. After this, Crane plugged the results from the forms into an IBM sorting machine, which then paired prospective couples together and (according to the Foundation) created 5,000 marriages over the course of three years. 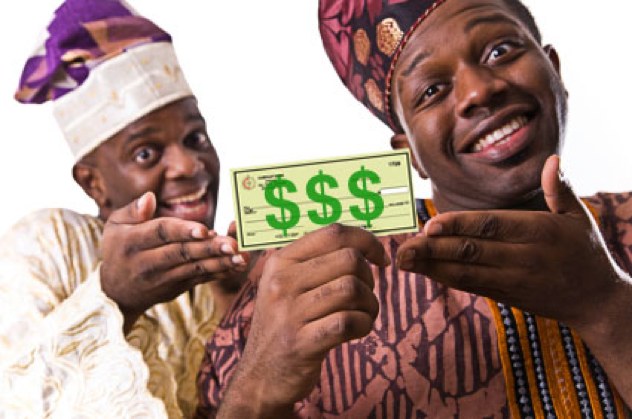 Speaking of spam, this is probably one of the most famous types and, sadly, one of the most effective. If you’ve had the luck of avoiding these, it’s rather simple to explain: a person will receive an email from someone purporting to be a member of some foreign royalty who needs help smuggling a vast fortune out of their country (often, Nigeria, hence the name). In return for helping them, the recipient will receive a massive cut of the proceeds, for which all they need to do is send the ‘royal’ their bank details. You can guess how the rest goes.

Well, if it makes anyone feel better, people have been pulling this con since the 16th century. Entitled the ‘Spanish Prisoner Letter Scam’, rich people would receive letters from distant (and apparently rich) relatives asking them to pay their bail in return for a cut of the wealth that the prisoner has. Anybody who responded would then receive more and more letters asking for more and more money, until the victim was eventually bankrupted by the con artists. In fact, it was such a prolific scam that the United States Postal Service actually had to issue guidelines for postmasters to enable them to recognize the letters, lest the entire country fall for it.

If u dnt no wht txt spk is, thn ths sntnc mst b nr impssb 4 u 2 undrstnd. If u do, thn congrtlns. This way of speaking- commonly referred to as ‘text speak’- first came into usage during the Cellphone era as a way for youngsters to send longer, albeit harder-to-read, texts to each other. However, with the slow demise of texting, text speak now forms a major part of internet slang.

However, before all of this, a language closely resembling text speak was being used prior to 1890 by bored telegram operators all over the world to chat with each other. For instance, to ask the question “how are you this morning?”, an operator would write “How r u ts mng”, to which he would likely receive the reply “I’m pty wl, hw r u” (“I’m plenty well, how are you?”). Meanwhile, instead of using LOL to indicate laughter, you would write “ha [long pause] ha [long pause] ha”. WTF, indeed. 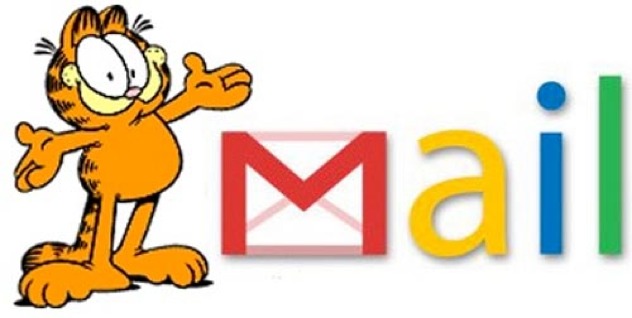 Typing ‘gmail.com’ into your address bar is bound to bring up only one thing…Google Mail, otherwise known as Gmail. Founded in 2004 (but not opened up the general public till 2007), it has since become the world’s biggest email service with over 425 million users worldwide, compared to ‘only’ 360 million for Hotmail. Interesting fact: Gmail was first announced on April 1st 2004 and, unsurprisingly, people mistook it for an April fool’s joke, solely because Google advertised it as having a 1GB mailbox, a figure unheard of at the time (for comparison’s sake, Yahoo was offering 4MB of storage and Hotmail 2MB.

However, if prior to 2004 you searched for ‘gmail.com’, you wouldn’t find the email provider that we know and love today. In fact, from 1995 till 2004, that web address was owned by the company behind Garfield for its Garfield Mail service (hence, Gmail). Unfortunately, no screenshots survive of this, but from what people describe, it was just a simple emailing system, albeit one with pictures of Garfield strewn everywhere. 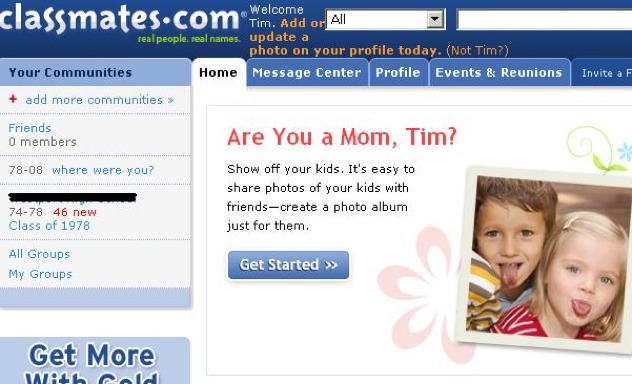 Statistically-speaking, 99% of the people who will read this sentence have a social media account of some description. Whether it’s a Facebook that they use to chat with their friends, a Twitter that they use to talk to celebrities (or abuse them in many cases), or a Myspace that they plug their band’s music with, social networking sites have played a crucial role in most people’s lives ever since the launch of Friendster in 2002, which many regard as being the first social network.

It’s just too bad then that they’re wrong. In 1995, from his basement, Randy Conrads launched Classmates.com, a website which people could use to link up with old school friends without having to endure the awkwardness and drudgery of the traditional high school reunion. Unlike Facebook (yet), users paid a small membership fee, which allowed them to send messages, create and join groups, and view other users profiles (which included content like photos, timelines, interests). The site was relatively successful for an age where relatively few people had internet, and according to the site, resulted in over 100 marriages. The site even still lives on today, albeit under the name of ‘Memory Lane’. 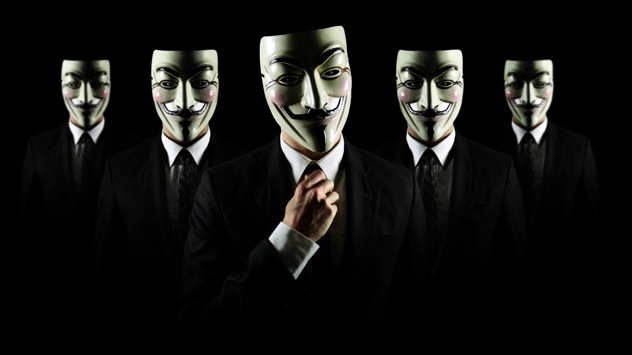 You’d be forgiven for thinking that DDOS (Distributed Denial of Service) attacks had replaced protests, petitions, and strongly-worded letters as the tools of the oppressed and unhappy. The aim of a DDoS attack is to ‘flood’ a targeted website with visitors, up till the point where the website overloads and crashes. Notable victims of DDoS attacks include North Korea, the Tunisian government, the US Department of Justice, the Motion Picture Association of America (as well as other anti-piracy groups), the UK’s Serious Organised Crime Agency, and News International. Indeed, the hacker group Anonymous recently called on the White House to acknowledge DDoS-ing as a legitimate form of protest.

However, when the earliest equivalent of this—known as ‘black faxing’—was first introduced, its intentions were less noble than toppling a dictatorship or righting a social wrong. Pranksters would send their victims (often fax telemarketers) a fax consisting of pages upon pages of black paper, a modus operandi that was heinously simple, but devastatingly effective. When the fax was received by the recipient’s machine, it would use huge quantities of then-expensive black ink and printing paper. As well as this, recipient’s phone lines would be rendered useless whilst the fax was being transmitted to them.

For more from Adam, you can check out his website or bother him on Twitter. If you want him to write for some words for you, you can also email him.