Regarded by many as the best president in American history, Abraham Lincoln’s story contains as much darkness as light. Lincoln’s life was a study in tragedy; his namesake grandfather was killed in a raid by Native Americans, and his mother died of milk sickness when he was just nine years old. He had a difficult relationship with his father. His first love interest, Ann Rutledge, died of suspected typhoid fever at 22. His son Edward died at age three, likely of tuberculosis. Another son, William, died of typhoid fever at 11.

All of these events, along with the burden of the presidency, doubtlessly contributed to Lincoln’s crippling “melancholy,” which would likely be recognized today as clinical depression. The great man stared down the barrel of gloom and death his entire life. When that life was cut short, many of those he touched seemed to have inherited his curse, a legacy of madness and death. 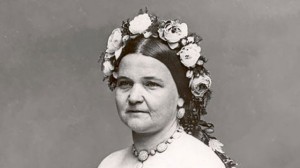 Many historians argue that Mary Lincoln suffered from bipolar disorder, or possibly narcissistic personality disorder, and a head injury sustained in a carriage accident caused her to suffer frequent migraines. Her carelessness with money was an issue when Abe was alive, but after his death, her spending spiraled out of control. She became known for buying strange multiples of items, like 10 pairs of gloves at a time. She made bizarre spiritualist claims and told her son Robert that someone had tried to poison her.

In 1875, Robert had his mother committed to an asylum. Mary wrote letters to friends and the press that pressured her son into releasing her, but as soon as she was free she tried to order a suicidal overdose of laudanum. The pharmacist, realizing what she was about to do, gave her a placebo. She spent her final years with her sister Elizabeth, crippled by cataracts and spinal injuries, and died at 63. She was buried beside her husband. 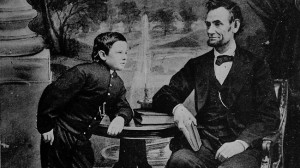 Thomas “Tad” Lincoln had it tough from the start—he was born with a cleft lip and palate. The result was a terrible speech impediment that only his father and those closest to him were able to understand. Perhaps because of his own rough childhood, Lincoln was very lenient toward his kids, and Tad and his brother Willie were described by insiders as “notorious hellions” given to rampaging about the White House, interrupting meetings, and turning their father’s offices upside down.

In February of 1862, Tad and Willie both contracted typhoid fever. Tad survived, but Willie didn’t make it. Afterward, his parents tended to let him get away with anything. He was so wild that he didn’t attend school, and tutors couldn’t handle him.

When Lincoln was shot, Tad was attending a play for children at nearby Grover’s Theatre. The manager made an announcement about the tragedy to the crowd. Tad was traumatized and ran screaming from the room. Later, he spent time in Europe and Chicago with his mother. He died at only 18 years old from a mysterious ailment that has alternately been described as pneumonia, tuberculosis, pleurisy, or a heart attack. 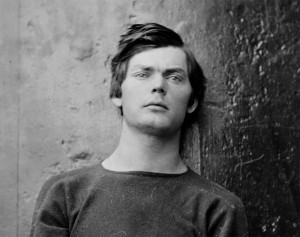 Lincoln’s murder was only a part of Booth’s plot; he intended to take out the entire federal leadership. Former Confederate soldier Lewis Powell was designated to assassinate Secretary of State William H. Seward. He would be accompanied by co-conspirator David Herold (who was probably a little simple-minded). Powell was allowed into Seward’s house after claiming that he was delivering medicine to the Secretary, who had suffered serious injuries in a carriage accident. Powell attacked Seward with a knife, but a splint he was wearing protected him from having his throat slit. Other members of the household joined in the scuffle, and Powell injured several while making his escape. He was captured when he attempted to return to the house of the Surratts, where the conspirators were headquartered. Powell was known for his gentlemanly manner, and when the hangman slid the noose over his head, he told the young man “I hope you die quick.” He didn’t. Powell was the last to die, thrashing for more than five minutes before finally going limp. His cohort, Herold, was also hanged. 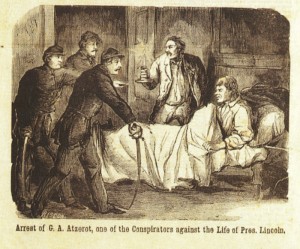 Co-conspirator George Atzerodt was charged with assassinating Vice President Andrew Johnson. Atzerodt took a room in the hotel Johnson was staying in, but ended up losing his nerve and just getting trashed at the hotel bar. The next day, the bartender reported Atzerodt’s suspicious behavior, which included repeatedly asking about Johnson’s whereabouts. His room was searched, and evidence was found linking him to John Wilkes Booth, along with a knife and a loaded revolver. Atzerodt was found guilty. When he was hanged, his body jerked at the end of the rope for several minutes before he died. 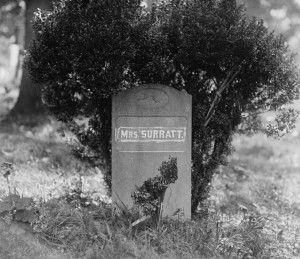 Mary Surratt’s role in the conspiracy to assassinate the president has long been debated. She owned the boarding house where the conspirators met, and was the mother of John Surratt, with whom John Wilkes Booth had once considered kidnapping Lincoln. It is likely that her only crime was trying to cover up for her son during the investigation. While George Atzerodt condemned her, Lewis Powell maintained that she was innocent. Pleas for Surratt’s clemency fell on deaf ears, and she was executed alongside the men. Her death appeared to occur almost instantly. Her last words were “Please don’t let me fall.” After she died, people began looting souvenirs from her boarding house until the police forced them to stop. Today, the building houses a restaurant. Mary Surratt was the first woman ever executed by the US federal government. 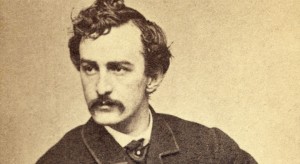 The majority of would-be presidential assassins have tended to be deeply mentally unstable outcasts. John Wilkes Booth was cut from a different cloth. Part of a celebrated acting family, he was a dashing leading man: wealthy, smart, and devastatingly handsome. A strong sympathizer of the Confederacy, Booth had originally planned to kidnap Lincoln and then ransom him for the release of Confederate prisoners. But when he learned that Robert E. Lee had surrendered and all was lost, it became obvious that Lincoln had to die.

We all know what happened next. Six days after Lee surrendered at Appomattox, Lincoln was murdered. After shooting the President, Booth escaped on horseback into the wilds of Virginia. Cornered in a tobacco barn with accomplice David Herold, Booth refused to surrender. Herold turned himself over, and the barn was set ablaze. Union soldier Thomas “Boston” Corbett shot him as he staggered about in the fire.

Wilkes did not die easily. Mortally wounded, he was dragged to the porch of the neighboring farmhouse. The bullet had smashed into his vertebrae and paralyzed him. He languished in agony for some three hours. His last words were “Useless, useless.” 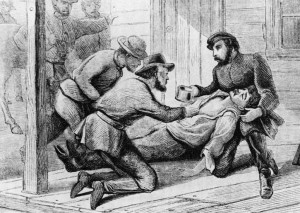 The killer of John Wilkes Booth may well have been the most disturbed individual on this entire list. Thomas “Boston” Corbett was a Union soldier and former hatter—a profession historically linked with lunacy due to mercury usage. He became devoutly Christian in his middle 20s, growing his hair long in an imitation of Jesus and using scissors to castrate himself so he would not be tempted to enjoy the company of prostitutes.

Corbett was a part of the 16th New York Cavalry Regiment, assigned to capture John Wilkes Booth. They had been ordered to take Booth alive, but after a standoff in a tobacco barn in Virginia, Corbett shot Booth in the head, almost in the same spot Lincoln had been shot. Witnesses contradicted Corbett’s report that Booth had been going for his weapon, but he was nonetheless widely praised for his action. Afterward, he returned to work as a hatter, but devolved into lunacy. After at least two incidents of threatening people with his revolver, he was remanded to the Topeka Asylum for the Insane. Corbett eventually escaped, and after staying with a friend, claimed he was going to Mexico. He was never seen again.

It is widely believed Corbett actually built a cabin near Hinckley, Minnesota and died in a massive wildfire on September 1, 1894. However, this is merely speculation, and the fate of Boston Corbett will likely never be known. 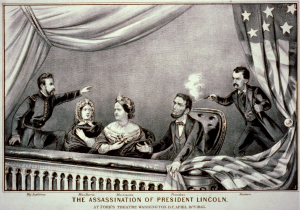 When the Lincolns went to Ford’s Theatre to watch Our American Cousin, they took along Major Henry Rathbone and Clara Harris. Rathbone was a promising young soldier in the Union Army, Harris was his fiance (and stepsister—but that’s another story). When Booth shot Lincoln, Rathbone confronted him, but the assassin drew a dagger and stabbed the major in the arm. Henry himself nearly died from blood loss.

The couple soon married, but over the years Rathbone was haunted by the tragedy and descended into madness. On Christmas Eve in 1883, while staying in Germany, he shot Clara to death and attacked her corpse with a knife. Distraught, he turned the knife on himself, stabbing himself six times. He spent the rest of his life in an asylum for the criminally insane. 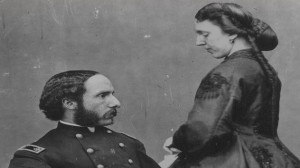 We know the terrible fate that awaited Clara Harris that Christmas, but there was more to her story. During the scuffle at Ford’s Theatre, Clara was covered in Lincoln’s blood, which splattered all over her face and dress. She kept vigil with Mary Lincoln for hours afterward and the dress was never cleaned. Clara kept the bloodied garment in a closet in the family’s Albany home, claiming that it brought on visions of Lincoln’s ghost. The sightings were chalked up to bad dreams until other people began seeing the apparition. Eventually, the Rathbones had the closet bricked up, entombing the dress. In 1910, their son smashed the brick wall and burned the bloody dress, claiming that it had cursed the family. 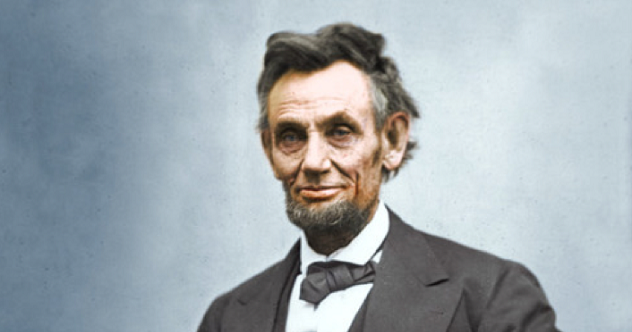 Some would say that not even death could release Abraham Lincoln from his earthly obligations. His is the spirit most frequently observed in the White House. A great number of very prominent people have been known to witness the ghost, including First Lady Grace Coolidge, Theodore Roosevelt, and Queen Wilhemina of the Netherlands. He seems to have been particularly active during Franklin Delano Roosevelt’s tense wartime presidency, appearing to multiple staffers. FDR’s wife Eleanor said she never saw Lincoln, but felt his presence many times.

Doubtlessly the most amusing tale of confronting Lincoln came from Winston Churchill. While staying in the White House, Winston took a hot bath. Upon returning to his room stark naked, he found Abraham leaning on the mantle of the fireplace. They made eye contact, and Churchill claims to have told him, “Good evening, Mr. President. You seem to have me at a disadvantage.” Lincoln smiled and vanished.