Nuclear weapons are the most dangerous things that man has ever created, so it’s baffling to know just how irresponsible we’ve been with them. Five-year-olds make better decisions about their diets than the people in charge have made with their nukes. 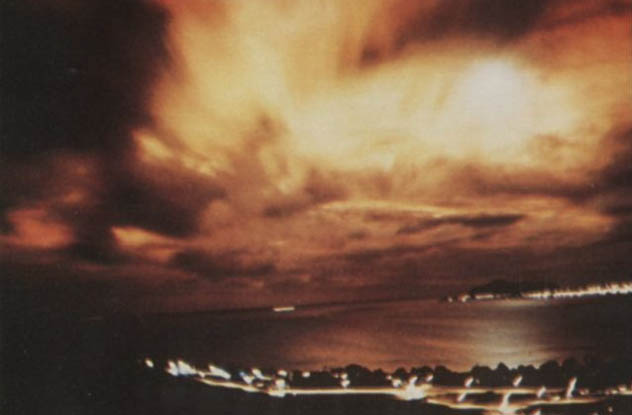 Two decades after the atom bombs fell on Hiroshima and Nagasaki, just blowing up nukes in the Nevada desert was starting to get boring. That’s when someone came up with the bright idea to launch one into space. Why? Just to see what would happen.

The US feared the Soviets could destroy American missiles by detonating nukes in space, so it launched its own to find out the results. No one had detonated a nuke so large in space before—and no one did again. That’s because Starfish Prime let out an EMP burst far larger than anyone had anticipated.

The pulse knocked out hundreds of streetlights and disabled phone lines in Hawaii, which was 1,000 kilometers (600 mi) from the detonation. Starfish detonated 385 kilometers (240 mi) above the Earth’s surface, so the pulse also crippled six satellites. 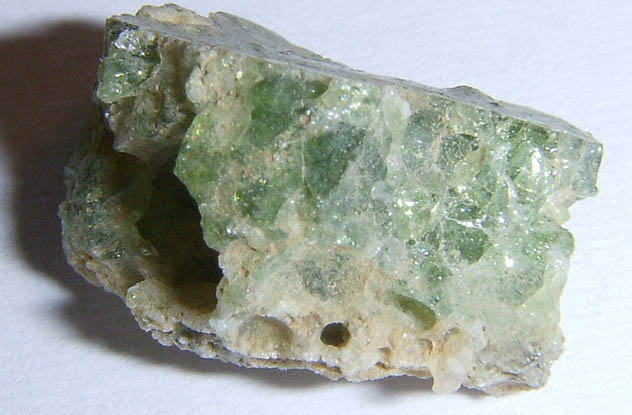 Trinitite is glass formed in the 1945 Trinity nuclear explosion, the first ever successful nuclear test. The explosion’s original fireball blew the glass into the air, where it fused into droplets and fell back to the ground like molten rain. The glass became a popular souvenir that people would take home from the site in the New Mexico desert.

The glass didn’t seem radioactive, so there seemed no harm in making jewelry from it. Well, it turned out that the glass was indeed radioactive, and when it touched the skin for long periods of time, it caused radiation burns.

Yet testing determined that you’d have to ingest more than a kilogram of the glass for the radiation to cause serious damage to you. So feel free to eat a big bowl of Trinitite O’s in the morning.

Nuclear weapons have many delivery systems, from bomber planes to fixed ballistic launchers to submarines. In the early ’50s, the United States figured out a way to fire a nuke from a modified railroad cannon. It had a range of just 20 miles and was fired just once.

The Atomic Cannon (or “Atomic Annie”) was obsolete the second it arrived in Europe. The military had to waste precious time and resources lugging the thing around (it was too heavy to airlift) to keep the Soviets from figuring out where they were. But while the atomic cannon was horrendously impractical, it was certainly flashy, and the Cold War was very much a display of just how flashy our weapons could be.

7Flying A Plane Through A Mushroom Cloud 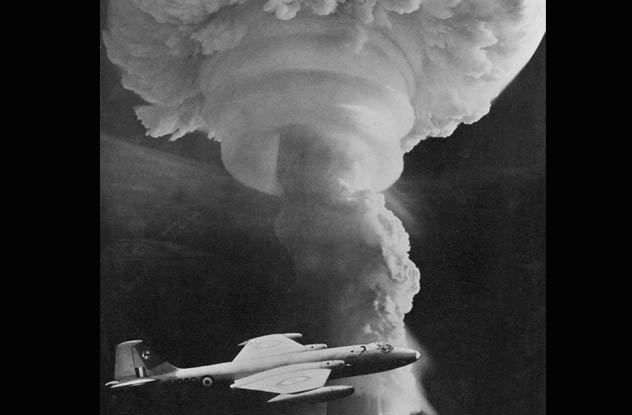 When the British were testing their first hydrogen bombs, they wanted to collect the radioactive material that the explosion released. So they coated a plane in wax to catch the particles and flew pliots through the mushroom cloud immediately after detonation.

Joe Pasquini was one of these pilots, and he didn’t like the idea. He knew they were being used as guinea pigs, but he didn’t have much of a choice. When his plane passed through the mushroom cloud, Pasquini noticed radioactive rain falling on the wings—rain otherwise rarely forms at altitudes of 14,000 meters (46,000 ft). If that wasn’t bad enough, later on, Pasquini was sent to fly through another cloud after another explosion.

Unsurprisingly, Pasquini has developed cancer seven times over the course of his life, and his children also have diseases. But the British government claims there’s no way to know for sure if the radiation was responsible.

The Davy Crockett was a giant, portable bazooka that fired miniature nuclear warheads. Long before the concept of suitcase bombs, we wanted something that could launch a small-yield nuclear device while being small enough to move around. The Davy Crockett’s warhead could fit in a backpack, and the firing rig could be disassembled quickly and was easily wheeled around.

We never actually used the Davy Crockett. The smaller you make a gun, cannon, or rocket, the shorter its range becomes. This launcher’s range was so small that a little breeze could make whoever launched the nuke a victim of its fallout.

5Standing Under A Nuke

In the wake of Hiroshima and Nagasaki and the dawn of the Cold War, Americans were terrified of a nuclear attack. The government wanted to ease their fears and show them that even if nuclear bombs went off in sky, they had nothing to fear. With this in mind, they took five volunteers (and one unwilling cameraman) and stuck them at ground zero—directly under a nuclear explosion—and filmed the entire thing.

The bomb had one-eighth the payload of the one that hit Hiroshima, and it exploded 5,600 meters (18,500 ft) overhead. The men had no protection whatsoever. The cameraman (the one who forced to be there) asked for protection but received none.

The men were all thrilled at the spectacular explosion—at the time. Today, only two of them are alive, and every one of them developed cancer at some point in their lives.

The idea behind the Baker Shot was pretty sound. America wanted to know what sort of havoc a nuclear attack could wreak on their ships, so the military assembled a fleet at its test site at the Bikini Atoll and detonated a nuke underwater. If you look closely in the video to the right of the spray column, you can see a battleship lifted on its nose before it gets engulfed.

The explosion rained millions of gallons of highly radioactive water down on the decks of the ships that stayed afloat. The military had chained live animals to these decks, and most died either immediately or within a few days from radiation poisoning. Most of the ships were irradiated beyond salvaging.

After several attempts to scrub and sandblast the ships clean (without anyone wearing any sort of protection), the military finally decided that the best course of action was to scuttle them all.

At least most of these incidents happened in the Pacific or elsewhere overseas. No one in America was exposed to radioactive fallout, right? Enter the Sedan project. This one explosion accounts for 7 percent of the entire nuclear fallout that has ever hit the US.

America at the time was considering digging a harbor in Alaska using nuclear weapons, so they wanted to test how big a hole a nuclear explosion could create. So unlike most detonations, the Sedan test created a crater in the Nevada desert and flung an enormous amount of irradiated dust into the air. This dust flew as far as 1,000 kilometers (620 mi) away.

How to create a lake with an Atomic Bomb

Speaking of nuclear shovels, the Soviets in 1965 had the brilliant idea to nuke a lake into existence at the Semipalatinsk Test Site in modern-day Kazakhstan. They had already successfully drained the Aral Sea of most of its water in a horrible irrigation mishap, so the ability to suddenly make lakes seemed attractive to them.

The idea was to nuke a lake-sized hole into the ground near the Chagan River. The explosion’s heat baked the ground solid enough to hold water. Afterward, the Soviets dug a channel between the river and the crater and let gravity work its magic, filling the “lake” to the brim.

The Soviets forgot to take just one factor into account: radiation. In fact, if you bring a Geiger counter to Lake Chagan, you’ll find it’s still radioactive today.

1The Nuke That Almost Exploded Over North Carolina

All of these stories pale in comparison to the time we almost lost North Carolina.

In 1961, a B-52 bomber went into a tailspin and crashed over North Carolina while carrying two nukes, each 260 times as powerful as the one that dropped on Hiroshima. The pilots jettisoned them, presumably not wanting nukes in their plane when they slammed into the countryside. One of the nukes was armed.

When the bomb hit the ground, its core actually received the firing signal. The only thing that stopped it from detonating and taking a large chunk of North Carolina with it was one tiny fail-safe switch. This switch could have easily malfunctioned because of the jarring impact—the bomb had four such switches, and three of them failed.

Only later did the military determine that the bombs did not “possess adequate safety” to be in the B-52.

Kier is a workshop moderator, writer, and personal experience team member at Cracked.com. When he’s not doing that or writing for Listverse, he’s hiding from our impending doom in his nuclear bunker.