China is known for many things, but they’re perhaps most infamous for their counterfeit items. From clothes to bags to electronics—even whole towns—China has it all. However, they’ve recently taken the counterfeit business a little further and have entered the disturbing realm of counterfeit foods. 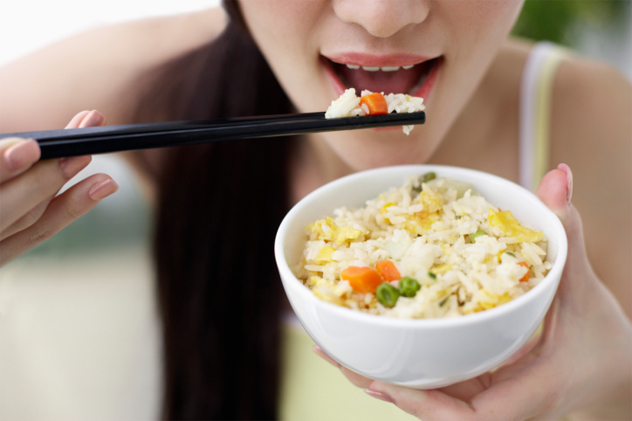 If there’s one food that should be impossible to counterfeit, it would be rice. But the Chinese did it anyway. China’s fake rice is also called plastic rice. It’s made from potatoes, sweet potatoes, and synthetic resin molded into the shape of real rice. The faux rice was commonly sold in Chinese markets, especially in Taiyuan in Shaanxi Province. The rice remained as hard as stone even after it was cooked and did not digest easily. It’s also pretty dangerous, since consuming three bowls of it is equal to consuming one bag of vinyl, or one plastic bag.

Aside from producing artificial rice, dishonest Chinese rice sellers also add flavors to ordinary rice and sell them to the unsuspecting public as “Wuchang rice,” which is more costly and generally considered one of the better brands of rice sold in Chinese markets. Only 800,000 tons of this Wuchang rice are produced annually, while about 10 million tons are sold. In other words, more than 9 million tons are fake. 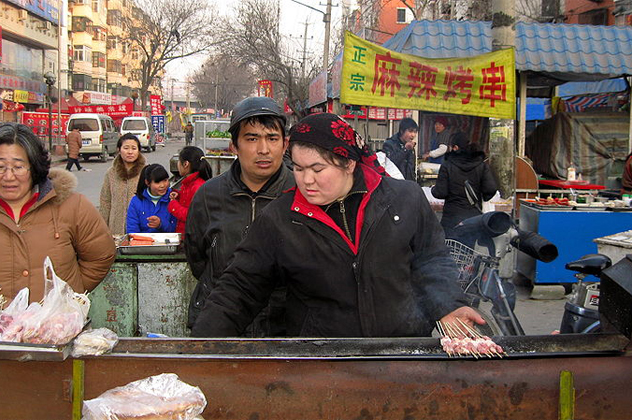 When they’re not tampering with rice, dishonest Chinese food sellers are adding chemicals to meat from rats, minks, and foxes and selling them as mutton. The scheme was so popular and successful that the police arrested more than 900 people and seized about 20,000 tons of this meat, all within three months. One of the sellers, a man named Wei, even raked in more than £1 million from sales alone. He mixed fox, rat, and mink meat with nitrate, gelatin, and carmine before selling it in markets to unsuspecting buyers.

Chinese police posted a tutorial on Sina Weibo, China’s biggest microblogging site, to teach people how to differentiate between real and fake mutton. While the difference between them is hard to tell at first glance, the white and red parts of real mutton don’t separate after getting thawed, torn by hand, or boiled, while the fake meat does. 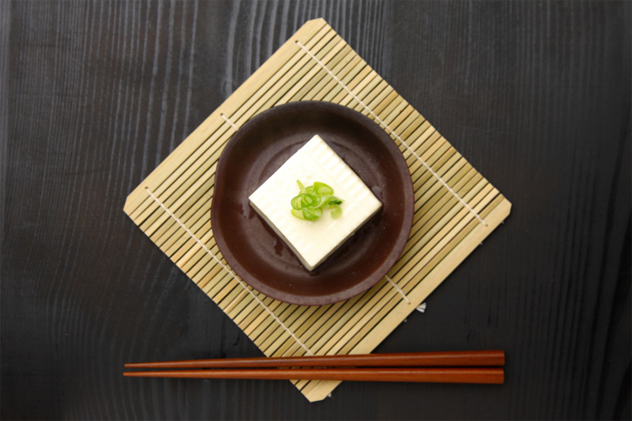 Tofu, also called soya curd, is a cheese-like food made from a mixture of soy milk and a coagulant. Chinese authorities recently closed down two factories in Wuhan, Hubei Province for selling fake tofu, which was made by mixing various chemicals together. One worker confessed that they combined soy protein with flour, monosodium glutamate, pigment, and ice to make the fake tofu before packaging it and selling it under the name of another company that was producing real tofu.

Using soy protein to make tofu isn’t the most dastardly of deeds, but not all the schemes were so innocent. Another criminal gang made counterfeit tofu by adding rongalite, an industrial bleaching agent that’s been linked to cancer. Supposedly, the chemical made their tofu chewier and brighter. The syndicate was headed by three cousins who sold about 100 tons of the tainted product to the unsuspecting public. When police raided their factory, they found employees making the counterfeit food with grimy, unwashed equipment. 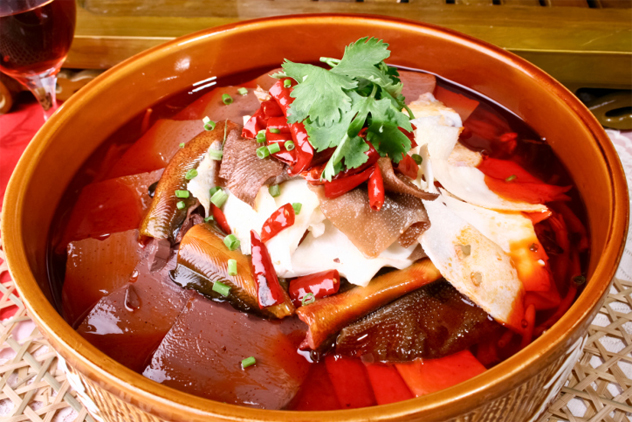 Duck blood tofu is a delicacy in China. It’s made from blood extracted from slaughtered ducks. The blood is then heated until it thickens, allowing it to be cut into squares and sold. That’s strange already, but it gets worse: Sellers have been known to mix deadly ingredients like formaldehyde with much cheaper pig or buffalo blood, then sell the concoction as duck blood.

Chinese authorities once broke a fake duck-blood ring that was being run by a couple in Jiangsu Province. In this instance, the couple wasn’t using pig or buffalo meat. Instead, they used chicken blood mixed with inedible dye and materials used for printing. One ton of fake duck blood was confiscated. The use of fake duck blood for duck blood tofu is so prevalent in China today that customers have become pretty good at spotting the difference between the real stuff and the fake stuff. 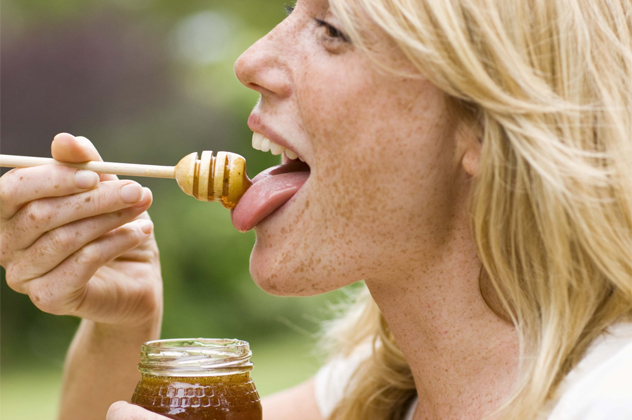 There are two types of counterfeit honey: the adulterated one, which is a mixture of real honey and sugar syrup, beetroot syrup, or rice syrup, and the fake honey, which looks more like real honey than real honey itself. It is made from a mixture of water, sugar, alum, and coloring.

One kilogram (2.2 lb) of fake honey can be produced for just 10 yuan (about $1.60) and sold for as much as 60 yuan ($9.50). About 70 percent of the honey sold in China’s Jinan Province is fake and, as usual, Chinese newspapers have offered instructions on how to differentiate between real and fake honey.

Police raided several fake honey production sites where 38 buckets of honey were seized. China is the world’s biggest producer of honey, which it exports to other countries. A study revealed that 10 percent of the honey sold in France was fake and most likely originated in either East Europe or China. US Customs also busted a fake honey-smuggling ring made up of US honey producers. It was discovered that they had been bringing fake honey into the US from China via Australia. 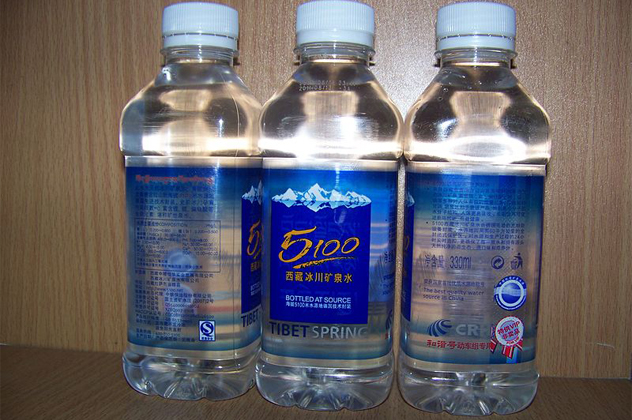 Selling fake honey is one thing; messing with people’s water supplies is a whole other criminal ballpark. Police have recently uncovered a scam in which plastic bottles are filled with tap water or poorly treated water and sealed with quality standard seals—the same used by genuine bottled water companies. Among other things, the bottles have been found to contain E. coli and a stew of harmful fungi. More than 100 million bottles of this bacterial soup are sold annually, with the sellers raking in more than 1 billion yuan (about $120 million). For comparison, about 200 million bottles of water (both genuine and counterfeit) are produced in Beijing annually. 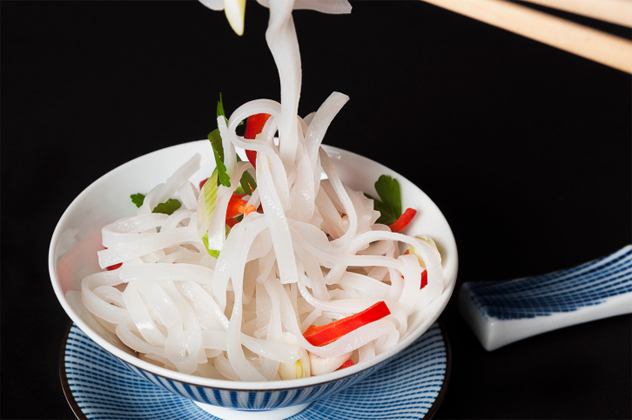 China’s counterfeit rice noodles are made from rotten, stale, and moldy grains which are usually used as animal feed. These are then mixed with cancer-causing additives such as sulfur dioxide to get the final product. And this isn’t a one-man show—almost 50 factories in Dongguan city were found to be in on the scheme, churning out 500,000 kilograms (1.1 million lb) of counterfeited rice noodles per day. Another inspection of 35 other factories showed that 30 of them were producing substandard rice noodles. Producers bleached spoiled rice and mixed it with additives to get triple the amount of rice noodles.

Aside from using stale rice, some producers use flour, starch, and corn powders instead. These noodles usually have a very low protein content—as low as 1 percent compared to 7 percent for pure rice noodles and 4.5 percent for mixed rice noodles. Some pigs that were fed these fake rice noodles ended up with weak limbs and several other problems. 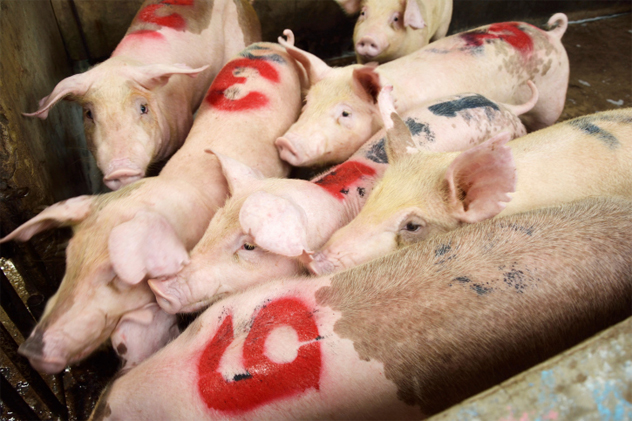 Clenbuterol, also called “lean meat powder,” is an additive added to animal feed. It burns fat in the animals but can cause sickness, heart problems, unnecessary sweating, and dizziness in humans. Its use in animal feed began in the 1980s, but was banned in 2002 because of its health risks. However, some meat-processing companies still give it to their pigs because it makes their pork leaner, and leaner pork fetches more money on the market.

To make matters worse, one of the companies involved is China’s largest meat processor and a subsidiary of Henan Shuanghui Investment and Development Company. The company issued an apology for the act, then recalled more than 2,000 tons of their pork. Twenty-four workers were sacked or suspended.

In an attempt to minimize losses, the company’s shares were suspended to stop the scandal from affecting its stock price. The China Meat Association also tried to downplay the incident so that it would not damage the Chinese meat market. Between 1998 and 2007, China witnessed 18 outbreaks of banned clenbuterol, during which one person died and more than 1,700 people became sick. 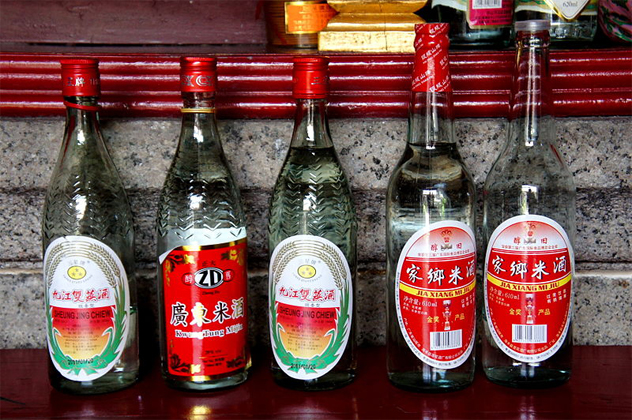 Fake and counterfeited wine is a big problem in China. China Central Television (CTV) reported that half of all the wine sold in China is fake. A lot of people in China’s wine industry also believe that about 90 percent of premium wines sold in China are fake as well. To counter the sales of fake wine, the Guangdong Provincial Wine Testing Center was founded to determine the authenticity of wines. Wine producers have joined forces with the government to produce an app meant to track wine bottles and cartons to determine whether they’re original or fake.

The scam was simple: Counterfeit wine makers would use the original name, label, and design from expensive wine bottles, but would slightly alter the names and logos on theirs to differentiate them. Others would simply collect empty bottles from expensive wines and then refill them with dirt-cheap wine.

Today, big hotels, restaurants, and auction houses break wine bottles after use to prevent them from being reused. During a raid on a fake wine-making syndicate in China, police recovered more than 40,000 bottles of counterfeited wine worth more than $32 million. The group had been buying cheap wine and dumping it into fake bottles from expensive wine brands. In 2012, police also recovered more than 350 cases of counterfeited wine in Shanghai. The total haul was worth about $1.6 million. 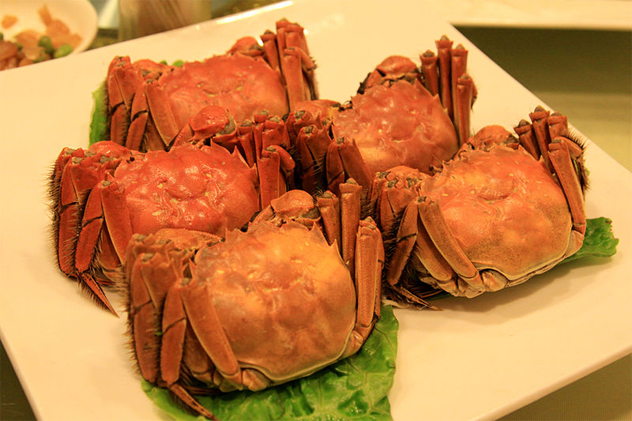 Yangcheng hairy crabs are the most expensive crabs in China, so it’s no surprise that people would try to pass off regular crabs as the pricier breed. The real deal comes exclusively from Yangcheng Lake, but there are a few sneaky ways around that. For example, some sellers take water from Yangcheng Lake and put other crabs in it for several hours before selling them as Yangchengs. Others use chemicals on the crabs to make them look like Yangcheng crabs. 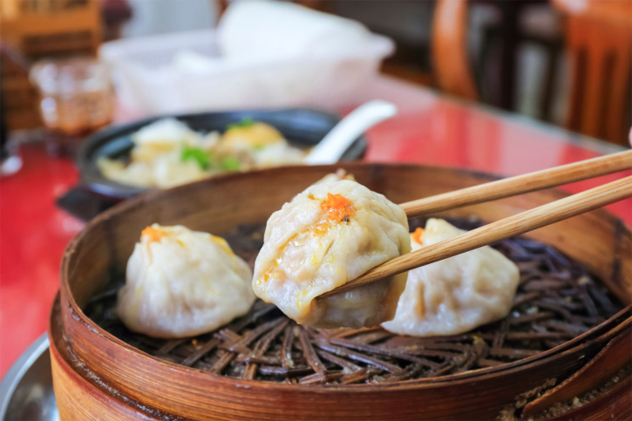 Cardboard buns are made from cut cardboard mixed with chemicals and pork flavors. An investigation carried out by CTV showed a video of a seller making the buns, commonly called baozi, out of cardboard. The cardboard is first mixed with caustic soda—which is used in the production of soap and paper—and then cut before being mixed with pork and seasoning.

The video went viral and was picked up by several international media organizations. The Chinese government responded this time, saying that the foreign media organizations had taken the news too far and that the fake buns were actually a hoax. The reporter who filmed the video was also arrested. The government said that he had done it to earn more audience ratings for the station.