Ever since Dan Brown wrote The Da Vinci Code, the Internet has been awash with people trying to solve the “mysteries” of great art. From aliens in Renaissance paintings to countless conspiracies involving the Mona Lisa, there’s been no dumb stone left unturned.

But not all theories about a work’s meaning are so openly nuts. Some manage to be both completely convincing and utterly mind-blowing.

10A Satyr Mourning Over A Nymph Actually Shows A Brutal Murder

Painted by Piero di Cosimo in 1495, A Satyr Mourning Over A Nymph supposedly depicts a scene from Ovid’s Metamorphoses. In that story, Procris is accidentally killed in the woods when her hunter husband Cephalus mistakes her for a wild beast and hurls a spear through her. It’s a typical choice of scene for a Renaissance artist, with only one problem. A close examination proves there’s no way Cosimo’s Procris could have been killed by accident.

According to British professor Michael Baum, all signs point toward the scene depicting a brutal murder. Procris has deep lacerations around her hands consistent with someone trying to fend off a knife attack. Her left hand is also bent backward in a position known as “the waiter’s tip,” typically found in murder victims who have had their cervical cord severed at points C3 and C4. Finally, there’s a neck wound corresponding to the position of C3/C4. Rather than being a scene of romance, Cosimo’s painting shows the aftermath of a frenzied knife attack.

This probably wasn’t intentional. Professor Baum suspects Cosimo asked the local morgue to loan him a corpse for the painting and just happened to get a murder victim.

Diego Rivera’s Man, Controller Of The Universe is one of Mexican art’s biggest paintings—literally and figuratively. Originally commissioned for the Rockefeller Center but reconstructed in Mexico City after Nelson Rockefeller took issue with its depiction of Lenin and had it destroyed, it’s one of the 20th century’s iconic works. It’s also a monumental act of revenge. The mural claims Nelson Rockefeller’s father had syphilis.

One of the key elements is the mural’s recreation of recent scientific discoveries. Galaxies, exploding suns, and close-ups of bacteria swarm in its central cross, floating above the heads of men and women. After Nelson Rockefeller tore down his original version, Rivera went back and painted his father, J.D. Rockefeller Jr., under one of those bacteria close-ups. The bacteria he chose just happened to be syphilis.

That wasn’t all he did. Despite J.D. Rockefeller Jr. being a lifelong teetotaler, Rivera drew him with a martini and a woman who may be a prostitute. For added effect, he stuck Lenin in a prominent position. 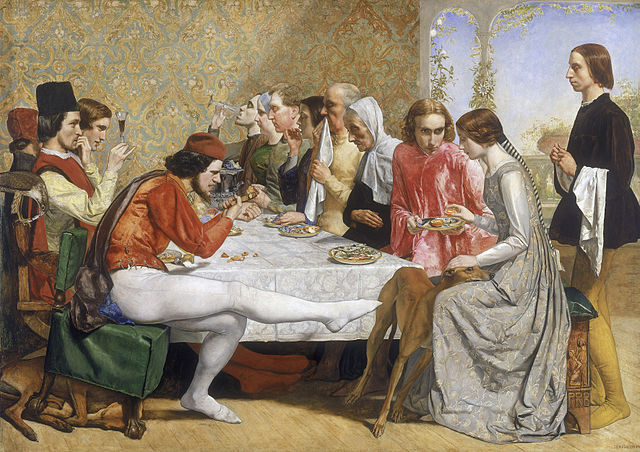 One of the leading lights of the Pre-Raphaelite movement, John Everett Millais is probably best known today for his Ophelia. At least, he was until 2012, when researchers discovered something unexpected lurking in his early painting Isabella. Featuring a bunch of characters from Boccaccio’s Decameron sitting around a table at a feast, it also includes what looks unmistakably like the shadow of an erection.

The character in the foreground left of the painting is cocking one leg and using a nutcracker. If you look closely, you can see the shadow cast by the nutcracker just happens to line up perfectly with his crotch, making him look extremely overenthusiastic about the entree. And far from being further proof that our minds are irredeemably in the gutter, it was almost certainly intentional.

7La Primavera Is A Love Letter To Horticulture 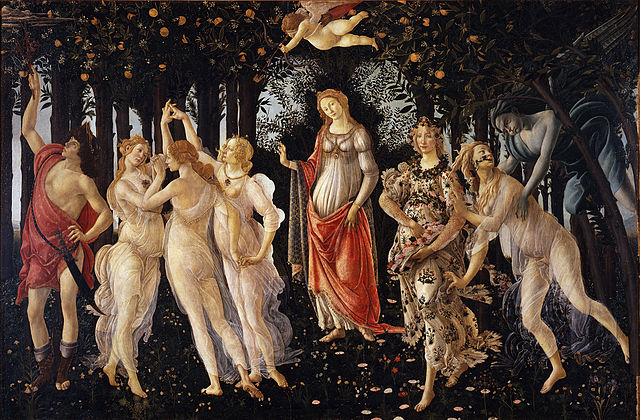 One of the most famous paintings in Florence’s Uffizi Gallery (which is saying something), Botticelli’s La Primavera is also one of the most mysterious. Featuring a group of women in a heaven-like meadow, experts still argue over its allegorical meaning. But there’s one theory that stands out from all the others, in terms of evidence and strangeness—some claim it’s all about horticulture.

The reasoning comes from the mind-blowing attention to detail Botticelli put into the plants in his imaginary meadow. According to official estimates, there are at least 500 individually identifiable plants on display, comprising nearly 200 different species. Some have suggested they represent all the plants growing around 15th-century Florence that flowered between March and May, while others have claimed they include fantasy plants Botticelli might have made up specially for the painting.

With all this attention to flowers, some aficionados barely register the human figures standing above. It’s even been said that the painting represents “not so much high culture as horticulture.”

6The Music Lesson Is Kinky As Heck 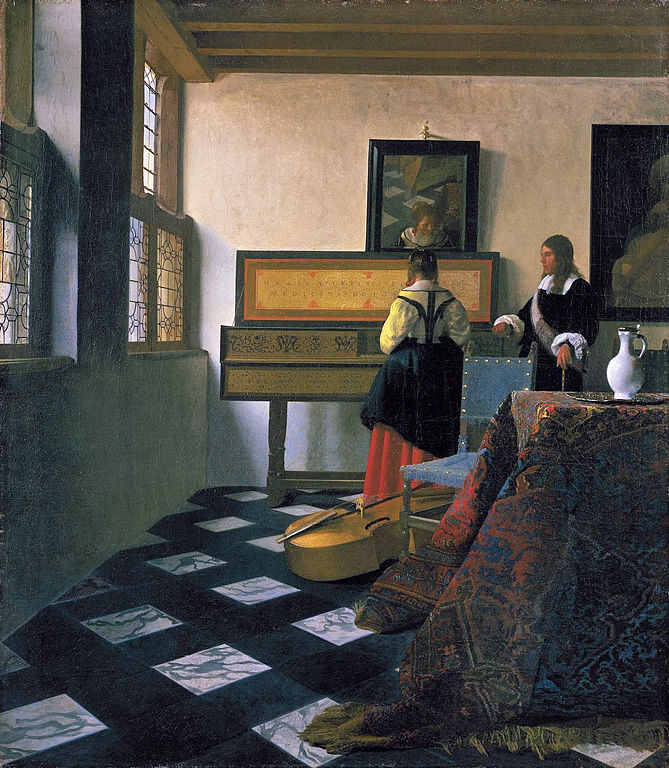 Painted by Johannes Vermeer in the 1660s, The Music Lesson is considered one of the greatest portraits of 17th-century Dutch life. Featuring a young girl being taught to play a type of harpsichord called a virginal by her handsome tutor, it’s a photo-realistic depiction of a typical upper-class day in Vermeer’s world. At least, that’s the standard explanation. Another view is that it’s all to do with sex and hidden lust.

According to this theory, the painting is filled with little clues to the raw sexual tension between the girl and her tutor. Unsurprisingly, the virginal has been associated with virginity, while the mirror above it reveals the girl is actually looking at the man as she plays, distracted by his “male presence.” Behind them, the pitcher of wine is meant to suggest an aphrodisiac effect is taking place, while the instrument on the floor doubles as an enormous phallic symbol. The angle we view the painting from might even suggest the viewer is a voyeur.

It’s not just this one painting. Some art critics contend the presence of music in Vermeer always symbolizes sexuality, making his oeuvre deeply kinky.

5Cafe Terrace At Night Is About The Last Supper 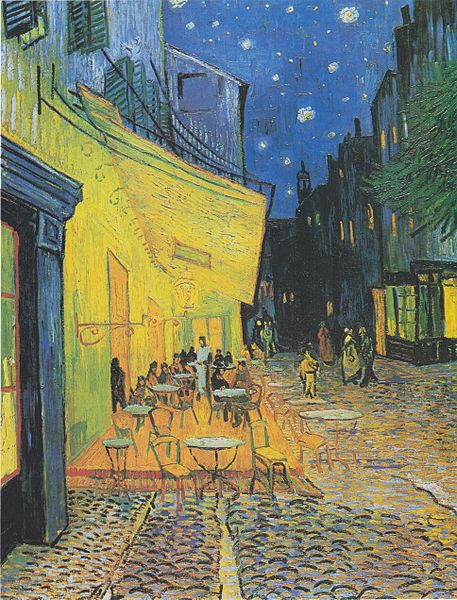 From an early age, Van Gogh was extremely religious. His father was a Protestant minister, and influential art critics have argued that his paintings are suffused with Christian imagery. In the case of Cafe Terrace At Night, that imagery comes in the form of Jesus sitting down to eat with his disciples. If you look closely at the diners, you can see there are 12 of them, seated around a central figure with long hair. Tellingly, there’s even a number of crosses hidden in the picture, including one directly above the Christ figure.

There’s contemporary evidence to back this claim up. When Van Gogh wrote to his brother about the painting, he claimed the world had a “tremendous need” for religion. He was also deeply infatuated with Rembrandt and voiced a desire to revive his style of subtle Christian symbolism. Cafe Terrace At Night might well be proof that he ultimately succeeded.

4An Allegory With Venus And Cupid Is About Syphilis 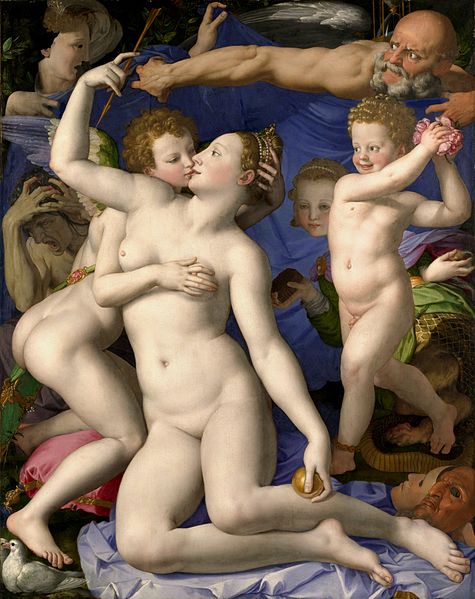 The focus of this theory is the screaming figure in the lower left of the painting. Although classically said to symbolize jealousy or despair, a close examination shows they’re actually very ill. Their fingers are swollen exactly as you’d expect in a syphilis patient, a fingernail is missing, and their hair has signs of syphilitic alopecia. Their toothless gums even suggest mercury poisoning, mercury being the closest thing Renaissance Italy had to an STD treatment.

It gets darker. The child showering Venus and Cupid with flowers appears to have pierced his foot on a rose thorn without noticing. Such a lack of sensation would directly result from syphilitic myelopathy. In other words, the painting appears to show the lovers surrounded by syphilis-induced suffering; a vision of what lies in store for them if they get carried away by passion.

3El Autobus Is About A Horrible Crash 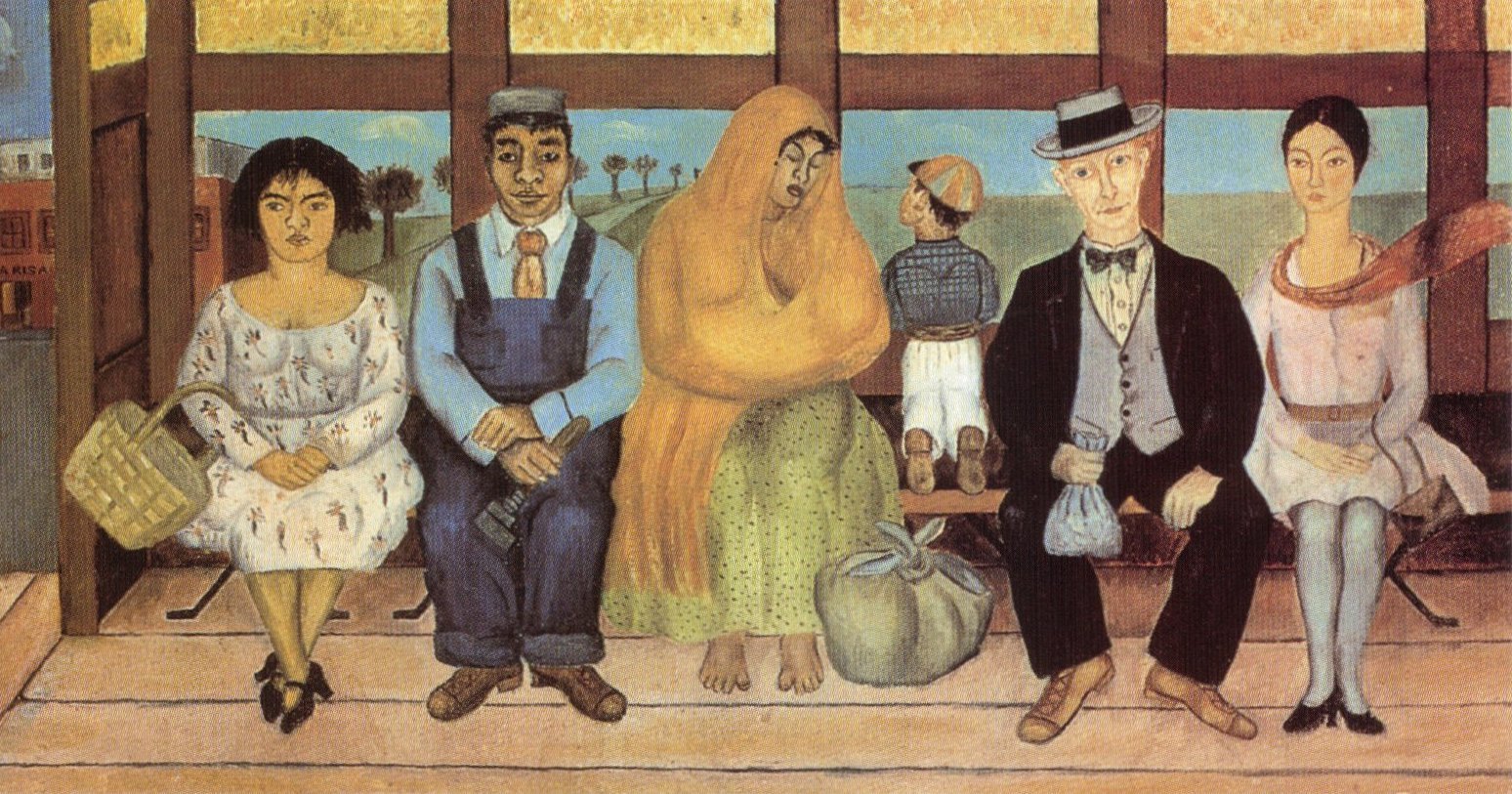 Painted by legendary Mexican artist Frida Kahlo in 1929, El Autobus is famous for showing a cross-section of Mexican society living side by side. A housewife, blue-collar worker, Native American mother, and rich gringo businessman are all waiting for a bus, along with a girl who is probably meant to be Frida herself. If that’s the case, then the painting has a much darker subtext. All of its subjects are about to be in a horrific accident.

In 1925, Kahlo was on a bus that crashed headlong into a trolley car. The wreck was so bad that Kahlo was impaled on a metal handrail, leaving her in agony for the rest of her life. Her later works frequently referenced the accident, implying it was a miracle that she survived the crash at all. And El Autobus is no exception. It’s been suggested the blue-collar worker is meant to be the man who saved Kahlo’s life by pulling the handrail from her broken body, meaning the painting is set just before they boarded the bus. Far from being on their way home, the characters are headed directly for a violent encounter with fate.

2The Dutch School’s Paintings Within Paintings 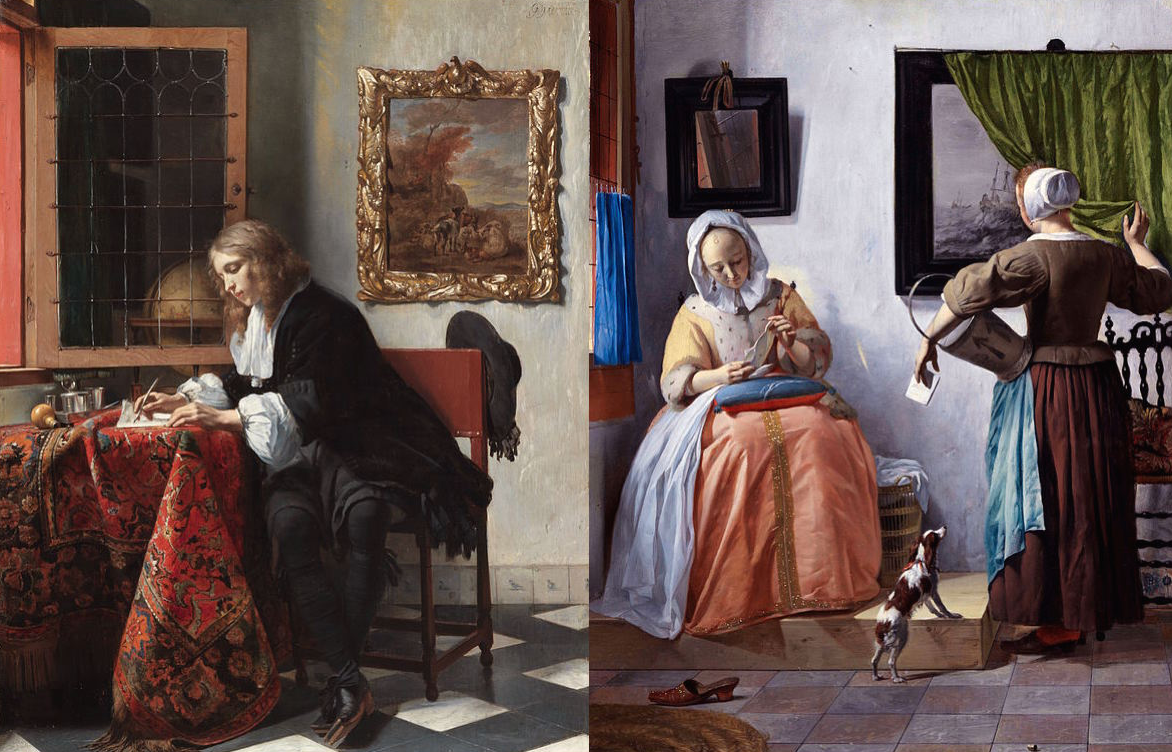 The Dutch Golden Age of painting is second only to the Italian Renaissance in stature. Like other eras, it had its own little quirks of style, like artists including other paintings in the background of their pictures. These “paintings within paintings” weren’t just Vermeer and his pals showing off. They contained a special symbolic code telling you exactly how to read each image.

Take The Slippers by Samuel van Hoogstraten. At first glance, the painting shows an empty hall with two slippers lying in it, with a copy of Father Admonishing His Daughter by Caspar Netscher hanging in the background. It almost seems boring. But contemporary Dutch viewers would’ve known that the Netscher painting takes place inside a brothel. Combined with the two slippers being a mismatched pair belonging to both a man and a woman, the clear inference would’ve been that the hall was empty because the occupants were busy having sex.

At other times, the code was subtler. Man Writing A Letter and Woman Reading A Letter (pictured above) by Gabriel Metsu show a man penning a letter to his lover and her reading it. In the second picture, a painting of a ship in a stormy sea is visible in the background, symbolising the turbulent nature of their long-distance relationship. In The Love Letter by Vermeer, a painting of a ship under ominous clouds shows bad news may be approaching.

Go looking, and you’ll find hundreds of examples of these Dutch “paintings within paintings,” each one subtly altering the meaning of the larger image. 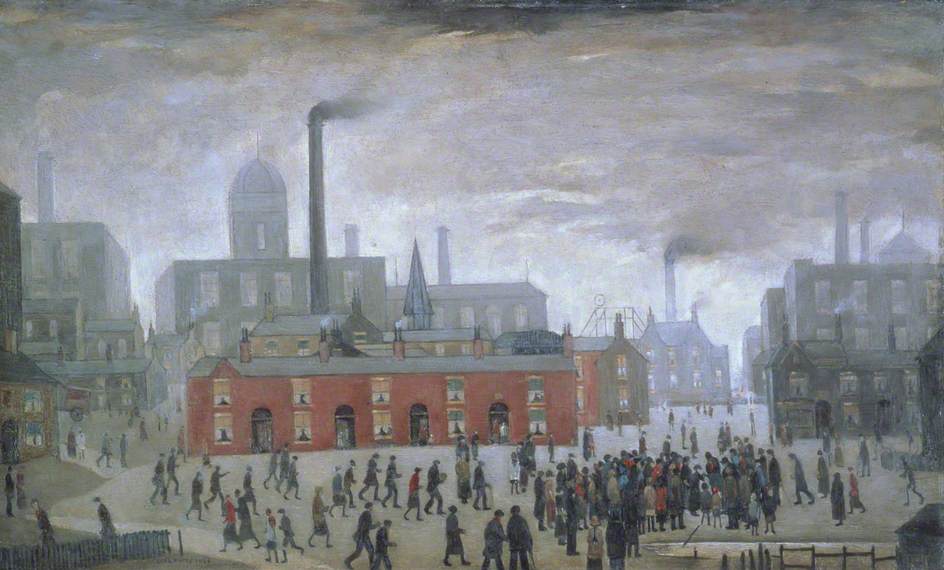 A mid-20th-century painter known for depicting northwest England, L.S. Lowry was famous for painting vast urban scenes with crowds of “matchstick men.” Although he was popular, the art world dismissed his paintings as trivial for a long time. They couldn’t have been more wrong. Like a sadistic Where’s Waldo, Lowry’s paintings are filled with hidden flashes of human suffering.

In his 1926 painting An Accident (pictured above), a crowd of people gather near a lake, looking at something hidden in their midst. While the painting isn’t blatant about it, the scene was inspired by a local suicide and the group are meant to be looking at a waterlogged corpse. His 1935 work The Fever Van shows a group of pedestrians gawking at a van picking up a patient. At the time, diphtheria and scarlet fever were widespread in Manchester and frequently fatal. The unspoken message is that the unseen sufferer in Lowry’s painting will almost certainly die.

Other Lowry paintings include people getting in fistfights, being evicted, or simply staring from their windows in overwhelming isolation. In each case, the tragedy is never more than a background incident, almost hidden in the painting. All the other matchstick men just keep on living their daily lives, unaware or uncaring of the suffering in their midst. The message is we’re utterly alone and our pain means nothing. It’s probably the most terrifying hidden message of all.