Some animals can do amazing things with their heads and faces. Many such feats have only been recently documented by science.

Limpets are small, sturdy aquatic snails. They lack a face in the conventional sense but compensate with jaggedly terrifying maws on their undersides. Like more commonly known animals, the limpet has the gastropod equivalent of a tongue—a radula.

Like the pointy papillae that turn cat tongues into sandpaper, a limpet’s radula is forested with spiky projections for scraping algae. The appendage also doubles as jackhammer. It’s used to rasp cozy alcoves into rocky surfaces for the limpet to inhabit.

It helps that limpet teeth are nearly indestructible and have recently been labeled as the strongest biological material known to man. When researchers atomically deconstructed the adamantium-like teeth in the lab, they found them studded with goethite nanofibers, giving them a consistency tougher than Kevlar. This unmatched tensile strength allows the limpet to constantly chew rocks without any damage to its teeth. Also, the raspy spikes retain their integrity regardless of size, although materials typically become weaker as they become larger.

Evidence moles can smell in stereo

A mole’s nose is the only body part that it isn’t ashamed of. In spite of overwhelming blindness and inadequate tactile sensitivity, common moles excel at locating food sources.

To find out how, mole scientist Kenneth Catania placed food (worm bits) around the edge of a circular “arena” into which the moles were set loose—first unencumbered and then again with one nostril plugged. Finally, he inserted small tubes into each nostril and crossed them so that they received scents from the opposite side of the body. The moles fumbled about, suggesting that they smell the world in stereo, a trait common to vision and hearing yet almost unheard of in the olfactory domain.

Trained rats have previously been coerced into stereo smelling to detect air currents, but such a strange ability had never been observed in the natural world. It’s a novel find, implying that other champion sniffers (like dogs) may be benefiting from the same technique. 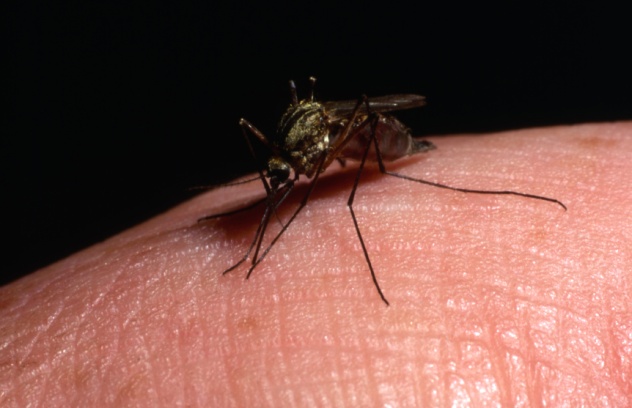 The mosquito proboscis, nature’s most annoying appendage, has finally become useful by inspiring a new breed of painless hypodermic needles.

Modern medical needles are formulated for maximum holing ability rather than comfort, but if mosquitoes are any indication, it doesn’t have to be that way. You’ve probably noticed your failure to notice being bitten. Such stealthy attacks aren’t noticed until the itch kicks in.

Your blood is kept flowing by an anticoagulant, and the bite itself goes unnoticed because the mosquito’s wildly serrated pricker makes minimal contact with nerve endings. In contrast, the much smoother hypodermic needle smashes through receptors like a runaway bus. Once the mosquito has hit paydirt (aka you), it widens the wound with its two-jawed proboscis and deploys a crazy straw-like tube to suck your blood. For added efficiency, the whole thing vibrates to cut an easier, more painless path into your body. How considerate.

7 C. Elegans Has A Magnetic Antenna In Its Face

It’s obvious that some creatures detect earthly magnetic fields, but until now, scientists have been unable to identify the physical structures responsible for these mutant superpowers.

In June 2015, researchers from the University of Texas at Austin finally stumbled upon the underlying nuts and bolts while tinkering with a little worm named C. elegans. Within the tiny nematode’s head, they found an even tinier, TV-like antenna—a double whammy of learning, as it was assumed that soil-dwelling worms were magnetically blind.

Researchers confirmed their supposition by placing worms in a gel-filled tube. Local worms always moved downward, as if scavenging food from soil. Worms from other corners of the globe, however, moved in directions which would have corresponded to “down” in their country of origin, as dictated by Earth’s magnetic field.

The scientists also found that they were able to boss worms around by altering magnetic fields within the lab. They also ascertained that a certain faulty gene renders worms senseless to this invisible realm. Future research will hopefully determine if other magnetically inclined animals have the same antenna-like structures embedded in their brains as well.

The oddly named King of Saxony bird-of-paradise is the owner of the animal kingdom’s most glorious eyebrows. (Let’s just call them “Kings” for simplicity.) These erectile appendages, called wires, don’t really do anything other than look good and have only evolved to their current state because females consistently mate with males that have the beefiest brows.

Even with a healthy set of wires, males are under severe selective pressure to win the attention from the fairer sex and have therefore acquired a variety of skills to supplement their dapper headgear. These include an avian version of interpretive dance, as well as an arsenal of screeching noises that could very well pass for an alien language. The birds also produce a strange, clicking song that resembles a combination of pattering rain and an old lawnmower. 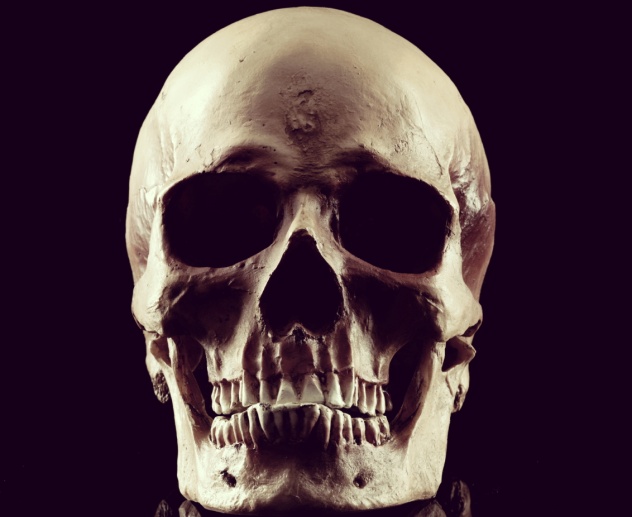 A pink underwing moth’s smooth blandness belies the deeply disturbing foulness of its adolescence. The horrible larva starts out hideous enough and then develops into a repulsive, skull-faced demon. Circular spots mimic the appearance of large, ever-seeing eyes, while a row of white splotches below gives the fearsome appearance of teeth. Its actual head is slightly more well-guarded, being curled up within its poo-colored mass of flesh.

However, it’s all a bluff. Even though the larva is decked out in scary face paint, it’s entirely harmless and is actually a strict herbivore. Its frightening visage is meant to scare away predators, as the animal itself is, to put it kindly, completely defenseless.

It spends its time rather unglamorously, foraging in bushes for the delicious vines that make up the bulk of its vegan diet. Luckily for you, it’s only found in the few undisturbed subtropical Australian environments where its exceedingly rare food source grows, so you’ll most likely never encounter one up close.

4 The Pinocchio Lizard Tips Its Phallic Nose At The Ladies

The Anolis proboscis, or Pinocchio lizard, gave researchers a nice surprise when it was unexpectedly found in an Ecuadorian cloud forest. Having feared it to be extinct, ecological bounty hunters from Tropical Herping searched for three years before serendipitously (and anticlimactically) finding one asleep on a branch. It was actually still quite a feat, since searches were carried out by night; the lizard is far too good at camouflaging itself during daylight. It also lives very high off the ground in the most inaccessible strata of trees.

The distinctive horn is possessed only by males, who are known to articulate their enlarged stumps quite suggestively at females. The huge schnoz is somewhat of a burden, though, as it must be . . . erected during feedings. How such a maneuver is accomplished is still a physiological mystery, because the area beneath should be devoid of muscles. Only time will reveal the evolutionary purpose of the horn, a rare feature found on only two other types of South American lizard. 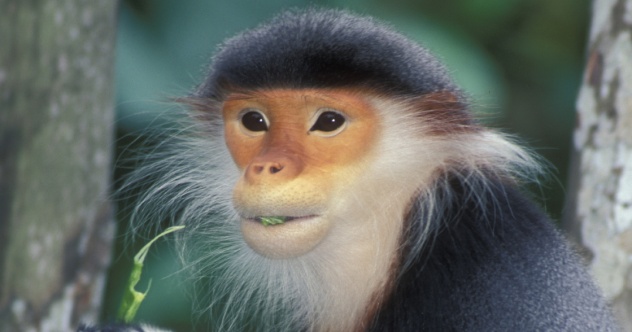 Monkeys boast the most colorful faces in the mammal kingdom, and they’re not just for show. Like humans, they discern friend or foe by facial features, which have evolved to be especially distinctive under the selective pressures of keeping a tight-knit community.

Researchers liken the phenomenon to a primitive, simian Facebook. The increasingly intricate markings are used as biological name tags to differentiate family members from other closely related individuals. To learn more, primatologists compiled a Tinder-like database of monkey head shots.

Interestingly, they noticed that an Old World monkey’s social status is reliably predicted by its face. Those living in larger communities boasted more intricate decorations, while small-town monkeys featured plainer faces. Then, in a total surprise, it was revealed that New World monkeys follow an opposite trend, sporting more flamboyant faces in smaller communities. Also, specimens living in densely vegetated equatorial regions tend to have darker faces, presumably for better camouflage.

The Most Poisonous Frog in the World

Some frogs and toads are famously toxic but in the laziest ways—they only secrete their foul toxins and then wait for hungry or stupid animals to intoxicate themselves by contact. To be considered venomous rather than poisonous, an animal must take a more active approach in delivering its toxin. The hateful Greening’s frog does just that, head butting its enemies into submission like a drunk soccer hooligan.

This odd and novel form of envenomation is possible thanks to numerous venom-dispensing barbs on the frog’s skull. The Brunos’ casque-head frog also possesses this ability, making these feisty specimens the only two venomous frogs ever documented.

This recent and painful revelation came by chance when a researcher in Brazil’s scrubby Caatinga ecoregion scooped up a cute little frog and spent the next five hours trying to extinguish the invisible flames engulfing his arm. Carlos Jared got lucky—he was “stung” by a Greening’s frog, whose venom is only more potent than a pit viper. A single gram of Brunos’ casque-headed frog juice, on the other hand, could lay down 300 men.

To put it nicely, the Harris’s three-spot moth larva is the most revolting creature ever conceived, and it survives only by being too disgusting to touch.

It’s also pretty good at hide-and-seek, spending its winters hibernating like a bear. Technically, it’s transforming during this time, but it doesn’t just dangle off a branch like other stupid pupae. Instead, it bores its way into a stump and seals off its new domain with a silky seal, embedded with woody fragments to perfectly conceal its presence.

Even though it looks like hairy, slithering fecal matter, its most unsettling habit is a predilection to hoarding useless old things—like, for example, its own heads. Those brownish bits adhering to the caterpillar’s wiry hairs are discarded heads from the creature’s past moltings.

In true heavy metal fashion, the decapitated mementos are used as weapons—in close-quarters as bludgeons or from range as manual projectiles. Alternatively, it can choose to simply confuse opponents by shaking.