Medieval Europe was a violent place where ruthless kings ruled with iron fists. Assassinations were an easy way of removing a tyrant or political enemy, and they were often carried out with shocking brutality. Some of them were also fiendishly clever. 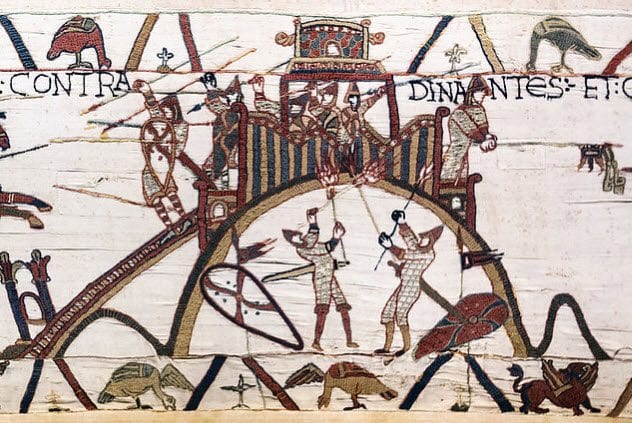 In 1065, William of Normandy was preparing to invade England. To secure his borders, he proposed alliances with the surrounding lords. However, Duke Conan II of Brittany hated the Normans because he believed they had poisoned his father. Conan refused to ally with William and strongly implied that he would attack Normandy as soon as the army left for England.

This turned out to be a bit of a mistake since William quickly had Conan poisoned as well. According to Orderic Vitalis, William had to be clever about it since the Breton would obviously have been careful to avoid the same fate as his father. So instead of targeting Conan’s food, William’s assassin smeared poison on Conan’s riding gloves. While out riding, Conan wiped his mouth with the back of one glove and soon suffered a fit and died. 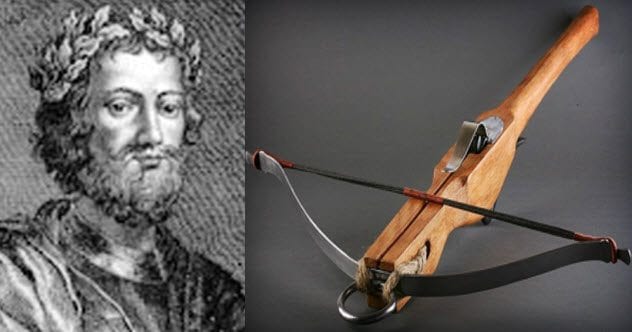 Kenneth II was assassinated in AD 995. The death is primarily notable for the absolutely insane story of the booby trap that did it. According to John of Fordun, the princes Constantine and Gryme persuaded a noblewoman named Finnguala to do the deed. Since Kenneth had killed her son, she was happy to oblige.

Finnguala rigged up her house with multiple crossbows hidden behind tapestries. The crossbows were connected by strings to a statue in the middle of the room. Finnguala then invited the king to inspect the statue. As soon as he touched it, the crossbows went off, firing a dozen arrows through him at once.

We can say for sure that Kenneth was killed in AD 995 and that Constantine and Gryme were blamed. However, most historians are skeptical of a crazy crossbow statue as the murder weapon. 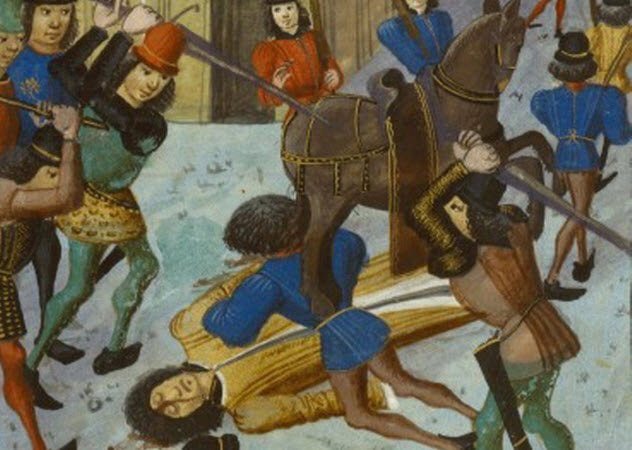 Charles VI of France was insane. (Among other things, he believed that he was made of glass and might shatter at any moment.) This prompted his nobles to struggle among themselves for power.

The immediate winner was the king’s brother, Louis of Orleans, who seduced the queen and effectively became regent. Louis was opposed by John the Fearless of Burgundy, who even tried to kidnap the king’s son. In response, Louis may have tried to rape John’s wife.

Things came to a head on November 23, 1407. Louis was leaving the queen’s house in Paris when he was attacked by a gang of eight hooded men. An eyewitness said that they struck Louis repeatedly “as if they were beating a mattress” until his brains were all over the road. John didn’t even try to deny ordering the murder, insisting that it was “for the good of the realm.” 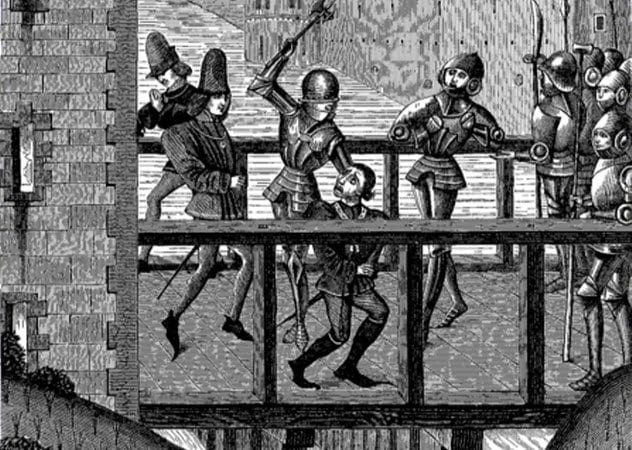 The murder of Louis of Orleans sparked a civil war between his Armagnac supporters and John the Fearless of Burgundy. This was the last thing France needed because it was the middle of the Hundred Years War and the English were invading.

In 1419, the two sides agreed to meet to resolve their differences in a special enclosure in the middle of the Montereau Bridge. However, as soon as John the Fearless arrived, three old friends of Louis of Orleans pulled out swords and killed him in revenge.

Although the Armagnacs insisted that the murder was not premeditated, John’s son Philip allied with the English, changing the tide of the war. It was later joked that the English entered France through the hole in John’s skull. 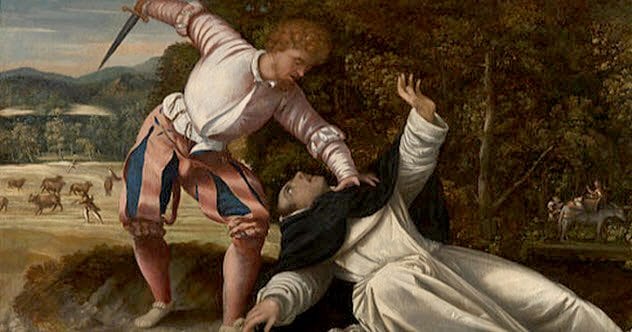 In the 13th century, the Catholic Church was campaigning against the Cathars, a heretical sect that believed in two gods, one good and one evil. The Albigensian Crusade had devastated the Cathar stronghold in southern France, while the Inquisition was established to hunt them throughout Europe.

One of the best inquisitors was Peter of Verona, who was known for his humble lifestyle and was unusually successful at persuading Cathars to rejoin Catholicism. As a result, the Cathar underground in Milan gathered funds and hired a pair of hit men. The killers tracked Peter to a lonely spot on the road, where they jumped him and put an axe through his head.

Peter was immediately declared a saint, and Pope Innocent IV released a bull allowing Inquisitors to use torture for the first time. Interestingly, one of the hit men, Carino of Balsamo, later repented and is now considered something of a holy man. 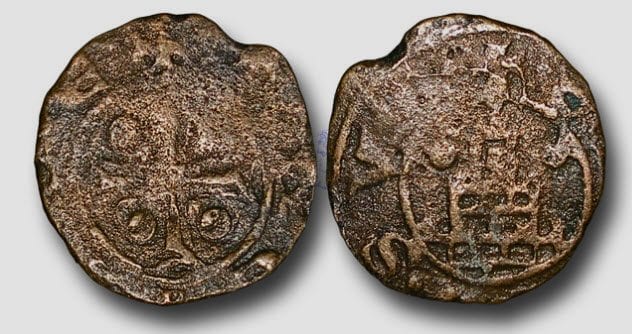 Philip de Montfort had an interesting family history. His father and uncle were leaders of the Albigensian Crusade, while his cousin Simon was the lover of Queen Isabella of England. The couple eventually overthrew and murdered Isabella’s husband, Edward II.

Philip was Crusader Lord of Tyre. His talented leadership alarmed the Egyptian Sultan Baibars, who asked the notorious Hashishin (“Assassins”) to take care of the problem.

A Syrian Assassin was sent to Tyre, where he successfully disguised himself as a Christian and prayed daily at Philip’s church. Once the Assassin was a familiar face, he wandered up behind Philip while he was kneeling at prayer and stabbed him in the back. Baibars attacked the Crusader states a few months later. 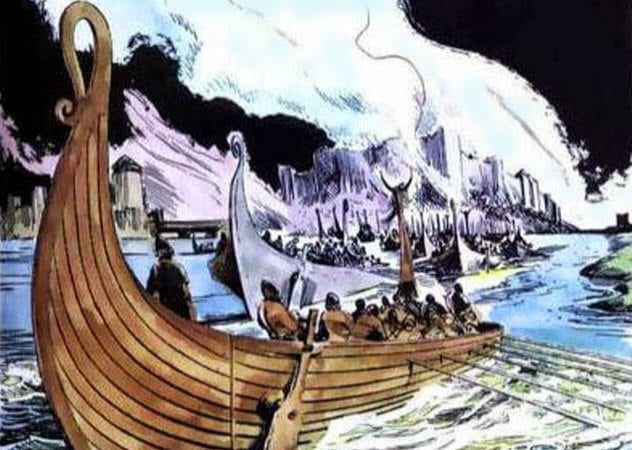 Godfred was king of Denmark around AD 800 when the famous Frankish Emperor Charlemagne dominated Europe. Charlemagne had conquered the pagan Saxons and forcibly converted them to Christianity, which was quite alarming to the pagan Godfred. In anticipation of a confrontation, he greatly expanded the Danevirke, a mighty series of earthen fortifications in southern Denmark.

When the Baltic city of Reric allied with Charlemagne, Godfred attacked and destroyed it. In 810, his fleets ravaged Frisia and Godfred began to talk of reconquering Saxony. According to Frankish chroniclers, Godfred boasted that he would stable his horses in Charlemagne’s palace. Furious, the emperor began building a fleet of his own.

It seemed that everything was set for a huge war between the Franks and Vikings until Godfred was suddenly stabbed to death by one of his own warriors. Many historians have suggested that the murder was ordered by Charlemagne, who presumably found assassins cheaper than fleets. 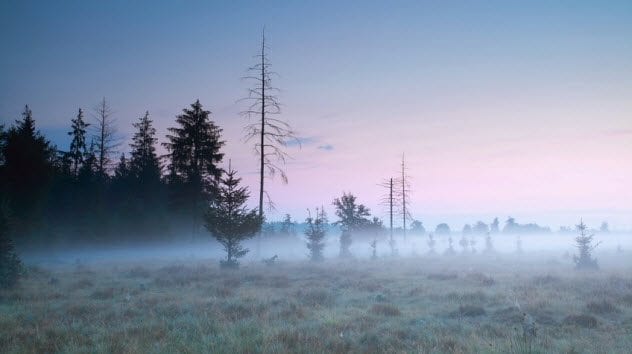 Murdering Danes named Godfred seemed to run in the family because Charlemagne’s grandson Charles the Fat did the same thing. Charles had named a Viking called Godfred as the Duke of Frisia. In return, Godfred agreed to stop raiding Frankish lands and to keep other Vikings from doing the same.

Unfortunately, Godfred got greedy. Frisia was poor land, so Godfred demanded that Charles give him some rich, wine-producing areas along the Rhine. This attempt at extortion seriously annoyed the Franks. They invited Godfred to discuss the issue on an island in the Rhine. To Godfred’s surprise, the previously meek Franks showed up armed to the teeth and hacked him to death. 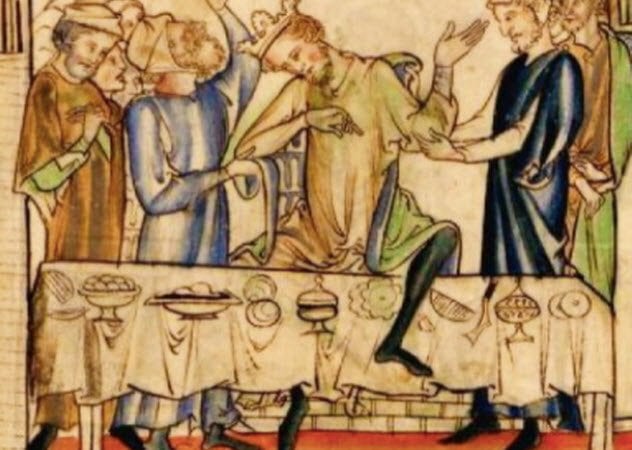 It’s often forgotten now, but the Norman invasion of William the Conqueror was actually the second time that England had been conquered in 50 years. Cnut (aka Canute) of Denmark made himself king of England in 1018. After his death, the throne eventually passed to his son Harthacnut.

Edward the Confessor was the son of the overthrown Anglo-Saxon king of England. Thanks to some complicated family politics, he was also Harthacnut’s half-brother. (They shared a mother.) If Harthacnut died, Edward was in line for the throne. As luck would have it, Harthacnut did die after suffering a mysterious fit at a banquet at age 25.

So what’s suspicious about that? Well, after Edward took the throne, the rebellious Earl Godwin of Wessex also died after suffering a mysterious fit while eating dinner with the king. Meanwhile, Edward’s half-brother dropped dead days after returning to England from exile in Kiev. Which starts to seem a little suspicious, really. 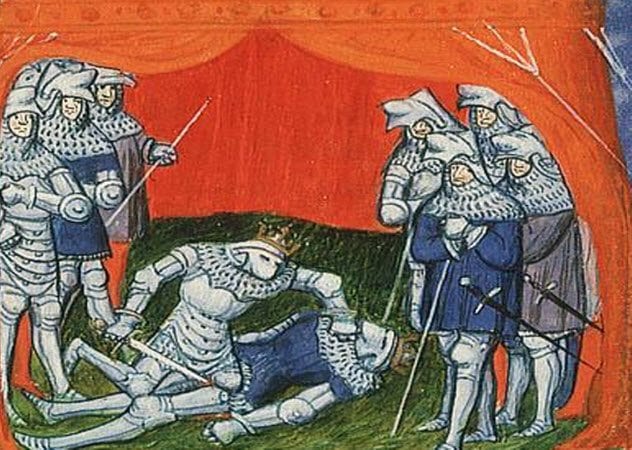 Pedro the Cruel was not a nice guy. As king of Castile, he was accused of numerous crimes. This included the murder of his brother Fadrique, who was dining with Pedro when a guard walked up behind Fadrique and hit him with a mace. When Pedro noticed that Fadrique was still moving, Pedro gave a knife to a page to finish the job while Pedro continued eating.

Fadrique’s twin, Enrique, soon rose in revolt and besieged Pedro in his castle. Enrique was supported by the famous French knight Bertrand du Guesclin. Bertrand had a reputation as a bit of a weasel, so Pedro offered him a bribe to help him escape. Since Bertrand was actually a huge weasel, he accepted and then informed Enrique, who agreed to match the bribe if Bertrand handed Pedro over.

On March 23, 1369, Bertrand helped Pedro sneak out of the castle and led him to a tent. To Pedro’s surprise, Enrique was waiting for him. The Spanish princes immediately started throwing insults, calling each other “son of a whore” and “son of a Jew.” Then they started wrestling. Pedro was winning until someone pulled him off and sat on him while Enrique stabbed him in the stomach.