Male bravado is often blamed the tendency of men to do extraordinarily dangerous things to impress others. But daredevils come in all shapes, sizes, and sexes. Women can and have been just as able to throw their own sense of self-preservation away to do really cool tricks.

Helen Gibson is generally considered the first stuntwoman in Hollywood history. Because her father had wanted a son, he encouraged Helen to pursue tomboy activities. After seeing a Wild West show, she signed up to be a rider, after first learning how exactly to ride a horse. She managed to ride so well that she could pick up a handkerchief from the ground while riding a horse at a gallop, despite the danger of being kicked in the head. After this, she married a rodeo performer, and the couple earned their money by winning races where they stood on the horse’s back.

Helen Gibson entered the film industry by starring in Hazards of Helen, a series of 12-minute films about a quick-witted heroine constantly placed in peril. In one episode, Gibson had to leap from the roof of a train station onto the top of a moving train. She later called it her most dangerous stunt. She managed to land on the train, but the motion of the locomotive almost launched her off and under the train. She managed to avoid death by grabbing an air vent, but, like a consummate professional, let herself hang over the edge to make the scene more exciting.

She later worked as a stunt double and was honored in her later life for helping to make Hollywood the film making center that it is. She died at the age of 86.

When she learned to do a forward somersault on the back of a moving horse, she was called a “real trick rider” and received a place in circus shows. Called “the fearless American hurricane hurdle rider,” she performed tricks like leaping from the ground onto the back of a galloping horse—while wearing baskets on her feet. Despite injuries, Wirth continued to perform in circuses across the world.

Wirth died at age 84 and was commemorated in her native Australia with a postage stamp.

Dorothy Dietrich is one of the top female magicians in the world. Her range of acts runs from escapology to sawing people in half live on TV to performing illusions with such unmagical creatures as ducks and poodles.

Her greatest escapology stunt was freeing herself from a straitjacket while dangling from crane hundreds of feet in the air. She did it without the benefit of a net. And the rope holding her up was burning. It had been attempted in the past, but Dietrich was the only person to achieve it. In another act, shown in the above video, Dietrich was the first woman to perform the bullet catch. A live round was fired from a gun into a metal cup held in her teeth.

Dietrich still performs around the world. Each Halloween, she holds a Houdini Seance—an attempt to contact the spirit of the great magician on the anniversary of his death. As yet, she has had no luck.

For a time in the early 20th century, a stunt involved forcing horses to dive from towers up to 60 feet high. Horse diving sometimes involved people actively riding the horse over the edge of the tower. Sonora Webster Carver was the first woman to become a horse diver.

William “Doc” Carver was the inventor of the act, and he placed an ad calling for “a girl who could swim and dive and was willing to travel.” Sonora Webster answered, and from 1924, she would mount a running horse as it climbed the ramp to the jump and ride it into a pool of water sometimes only 12 feet deep. She married Doc’s son, marrying into the family business.

In 1931, Sonora’s horse Hot Lips made a mistake and tumbled into the water face first, as did Sonora. The shock of the collision detached her retinas and totally blinded her. Despite this, she continued to dive horses for 11 years. Carver lived to be 99. 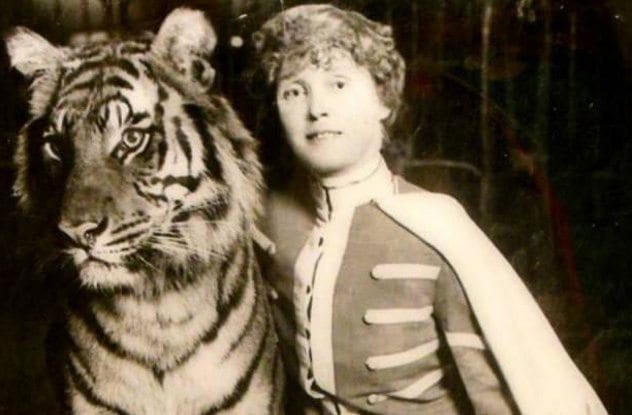 Mabel Stark was the first female tiger trainer in the world. Stark was a depressed young girl, so her doctor suggested she study to be a nurse, hoping the excitement of the job would drive off the blues. In the breaks between studying, she went to the zoo, becoming obsessed with the big cats. Stark left nursing for working in the circus. She began with horses but soon made friends with the big cat wrangler; she would later marry him.

In 1916, Stark began hosting the tiger act but worked with all the big cats. The animals did not always return her affection. She was injured many times. On one occasion, she had to be carried from the ring unconscious after being grabbed and mauled by a lion that broke her arm.

Stark performed with big cats until 1968, when she was forced to retire. After she left, one of her tigers escaped and was shot and killed. Stark killed herself soon after, depressed by the loss of her tiger and her job.

In the early days of aviation, simply getting on a plane was an act of bravery. Crashes were common, and fatalities none too rare either. But it seems that no sooner was mankind airborne that they wanted to make the act more thrilling. Wing-walking, or barnstorming, involved people climbing from the relative safety of the plane and performing seemingly impossible acts on the wings. Lillian Boyer was one of the great female wing-walkers.

Lillian Boyer was called “The Fair Devil of the Air,” among other things.
She earned the title with such daring acts as moving from one plane to another while in the air, hanging from a rope by her teeth, standing on her head on the wing, and riding the wing through a loop the loop. Despite the risks of plummeting thousands of feet to the ground, she claimed never to be afraid. “I don’t know if I lacked good sense or what,” she said. When asked what a beautiful lady was doing in such a dangerous game, Boyer said, “Strength and alert judgment are not determined by sex.” 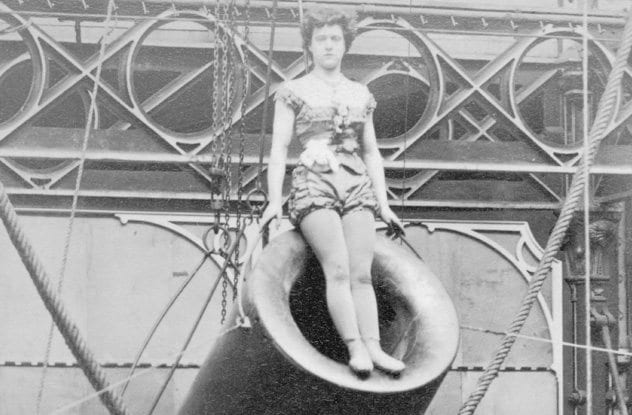 Rosa Richter, who performed under the name Zazel, was the first human cannonball. In 1877, at the London Aquarium, she was launched with an explosion from a cannon over 70 feet, above the upturned faces of the astonished crowd below. This was the novel conclusion to Zazel’s more traditional acrobatic routine.

She only appeared to have been launched out of the barrel of a cannon. In reality, the explosion and boom that seemed to propel the 16-year-old girl into the air was a trick of stagecraft. Hidden inside the “cannon” were ropes and springs that provided the force to throw her toward the net, where she landed safely to rapturous applause.

This method of launch presents many opportunities for something to go wrong—a tangled rope could spell disaster. Zazel avoided this particular issue but did succumb to the danger inherent in all cannonball acts. Gravity is a harsh mistress. She missed the net and broke her back. She survived but retired from daredevilry. In 1876, Maria Spelterini at age 23 became the first woman to walk a tightrope strung across Niagara Falls. Not content with doing it once, she performed the stunt five times in July that year. The wire she walked on was 2.5 inches across.

After crossing the wire the first time, Spelterini thought she needed to make her show more dramatic. She put peach baskets on her feet to increase the risk. She then did a crossing with her hands and feet tied together. Next, she walked across the falls only to return again by walking backward on the wire. She seems to have been on to something as contemporary news reports almost paid more attention to her flamboyant dress and style than to her startlingly dangerous acts.

After several more performances, Spelterini stopped appearing as a daredevil. Despite her fame and place in the record books, not much is known about her life. When and where she died remains a mystery. 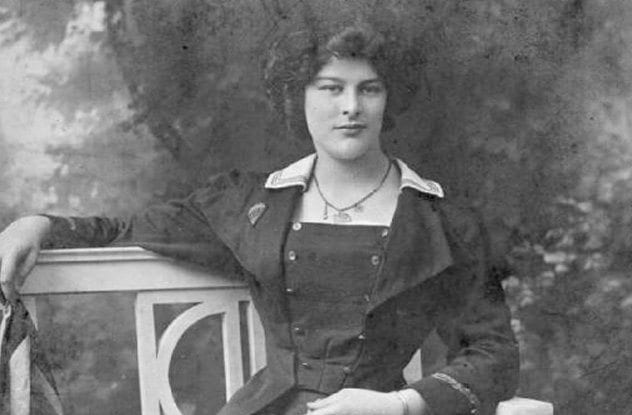 In 1903, Elizabeth “Dolly” Shepherd was a 16-year-old waitress in London. Buffalo Bill Cody was touring his Wild West show at the time. He shot a plaster egg off his wife’s head while wearing a blindfold, but the bullet grazed her scalp. Dolly stepped forward to let him try again using her head. For her bravery, Buffalo Bill took Dolly to a balloon display. With half an hour’s training, Dolly began making parachute jumps from balloons.

People would come and pay to see her and other girls launched by balloon to several thousand feet and parachute down to the audience below. She saw several other people die—parachute technology was still being perfected. Dolly was undaunted. She said she would “go high because I had it in my head that if I had to be killed, I’d like to be killed completely: good and proper!”

Dolly made the first tandem parachute jump when something went very wrong. Dolly was being sent up with another girl. The other girl’s parachute malfunctioned and would not detach from the balloon. Dolly urged the girl to climb across and wrap her arms and legs around Dolly to share her parachute. While this was happening, the balloon had ascended to 11,000 feet. The pair survived the fall, but Dolly was left paralyzed.

63-year-old schoolteacher, Annie Edson Taylor the first to go over Niagara Falls in a barrel

In 1901 Annie Edson Taylor was a Civil War widow searching for a way to make herself famous and make a fortune in the process. The method she chose was to load herself into a barrel and throw herself over Niagara Falls. As you do.

On her 63rd birthday Taylor was placed into a wooden pickle barrel by two assistants and strapped in by a leather harness. Her plan was, if she survived, to sell memorabilia and give lecture tours. To improve the chances of survival, the barrel was padded with cushions, but it was still a chancy proposition. The barrel was towed into the Niagara River and cut free to ride over the falls.

Taylor survived. She bobbed around at the bottom of the falls for 20 minutes before being rescued. After the stunt, she said, “Nobody ought ever to do that again. If it was with my dying breath, I would caution anyone against attempting the feat.” Of course they did. Of the 15 people who have tried to make the jump, five have died in the attempt.

Unfortunately, the fame she sought never materialized, and nor did the fortune. Taylor spent most of her money trying to recover her barrel after it was stolen by her manager.