Keeping up with the news is hard—so hard, in fact, that we’ve decided to save you the hassle by rounding up the most mind-blowing events each month. And April 2017 offered plenty to be mind-blown about. There were incredible scientific advances, horrific catastrophes, and shocking events which may yet change the course of world history . . . 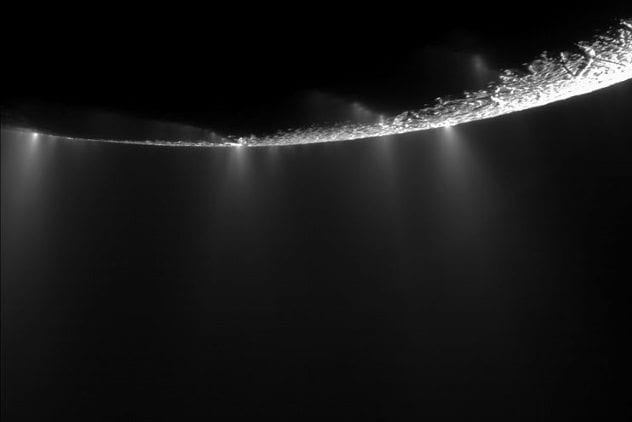 Orbiting Saturn is one of the strangest moons in existence. Enceladus is a ball of ice about the size of England that was ignored for years in favor of its more exciting big brother, Titan. Then, in 2005, NASA’s Cassini-Huygens spacecraft photographed gigantic jets of water exploding out Enceladus’s poles. Suddenly, little Enceladus began to look mighty interesting.

Other discoveries followed: evidence of subsurface oceans, organic materials, and tides. But the biggest discovery came last. In April 2017, Cassini made a final pass through Enceladus’s water plumes. It found the last building block needed for life.

Cassini detected hydrogen, a potential source of energy and the last item that life would theoretically need to begin on the distant moon. Sadly, this amazing discovery comes with a planet-sized caveat. Cassini is about to complete its mission with a suicide dive into Saturn, and NASA has no future missions planned. Enceladus may now be the best candidate in our solar system for life, but we won’t be able to look for it for another two decades.

9 The WHO Began Real-World Trials For A Malaria Vaccine 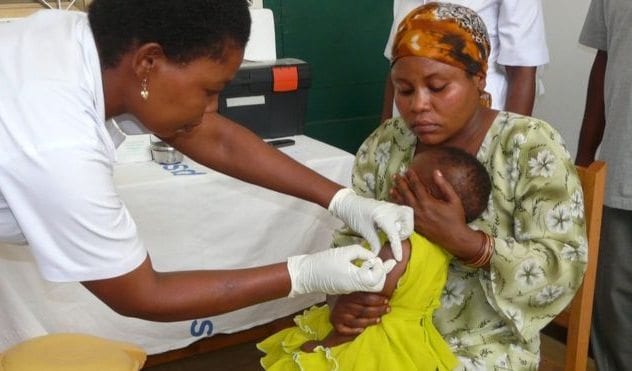 Malaria is the deadly disease that even other deadly diseases hate. A mosquito-borne parasite, it is found across the Earth, putting 50 percent of the global population at risk of infection. It kills a shade under 500,000 people annually, roughly as many as the Syrian war has managed in six years. And, amazingly, we may be about to defeat it. April 2017 marked the beginning of the World Health Organization’s first attempts at trialing a malaria vaccine.

Previous clinical trials had been run in labs. This new one will take place out in the real world. Three countries have been selected: Kenya, Ghana, and Malawi. Some 750,000 mostly poor children will get the vaccination or a placebo. If everything works out, hundreds of thousands of them could be spared an agonizing early death.

Things are still at a very, very early stage. Vaccinations won’t actually begin until 2018. But even these early baby steps represent an incredible victory for science’s fight against disease.

8 We Lost Our Last Living Link To The 19th Century 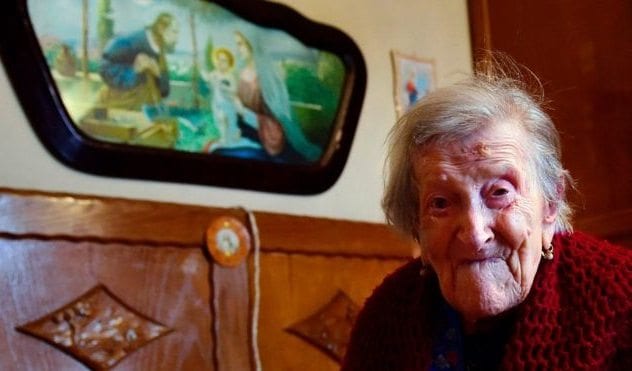 Italian pensioner Emma Morano was the last person alive to have been born prior to 1900. In the course of her lifetime, over 90 Italian governments had come and gone, two world wars had been fought, flight had gone from pipe dream to reality, and empires had collapsed.

On April 16, 2017, all that came to an end. Emma Morano passed away in her apartment in Verbania. With her, we lost our last living link to the 19th century.

It’s impossible to overstate how different things were when Emma was born. Queen Victoria was still alive. Penicillin hadn’t been discovered. The Austro-Hungarian and Ottoman Empires were still standing. Britain ruled the world. At the moment of her birth, in November 1899, Emma was closer in time to the Napoleonic Wars than she was to us in 2017. Her passing represents a monumental severing with our history.

7 Colombia Was Hit By A Devastating Landslide 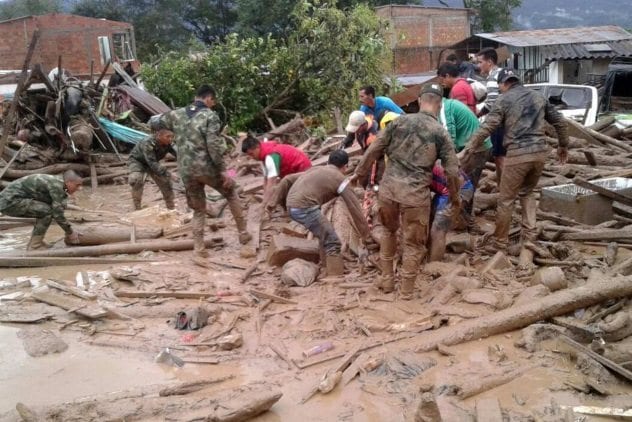 In the early hours of April 1, heavy rainfalls triggered a series of landslides in Southwest Colombia. As people slept, a torrent of mud and debris swept into the tiny city of Mocoa. Houses were washed away. Buildings collapsed. Children drowned in their beds. By the time the Sun rose, over 300 people were dead.

The Mocoa landslide is one of the worst in living memory. Even in a country as numbed to tragedy as Colombia, the sheer number of people killed was enough to take the breath away. Aside from the 301 corpses identified, at least 300 people still remain missing at the time of this writing, most of them likely buried beneath tons of earth. Between 90 and 100 children are thought to be among the dead. Many of them will never be recovered.

Tragically, it later emerged that illegal construction had weakened the landscape, allowing the landslide to gain such deadly potency. Had the local government heeded warnings, 100 innocent children would still be alive today. 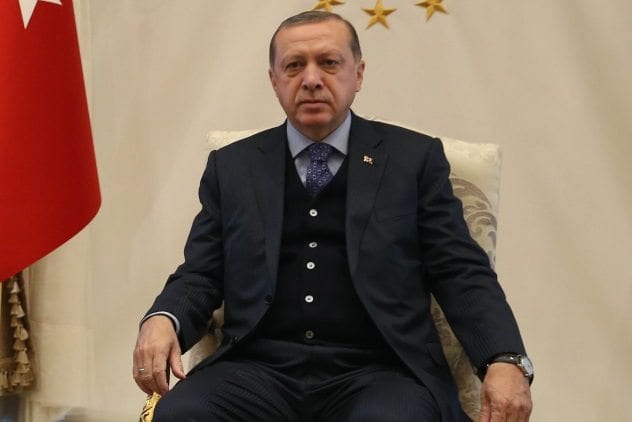 Under the new laws, Erdogan can rule by decree, can interfere with the judiciary, and can extend his reign by another two or three terms of five years each. (He’s already been either prime minister or president since 2003.) The office of prime minister will be abolished. The Turkish parliamentary system will be replaced. Imagine a US where the executive branch wasn’t held in check by the legislative or judicial. That’s Erdogan’s Turkey.

Things had already been heading this way for a while. After a failed coup in July 2016, Erdogan conducted a brutal, ongoing purge that saw around 40,000 arrested and around 150,000 removed from their jobs. But this vote seals the deal. Turkish democracy is gone. Now there is only Erdogan.

5 The US Attacked Syria 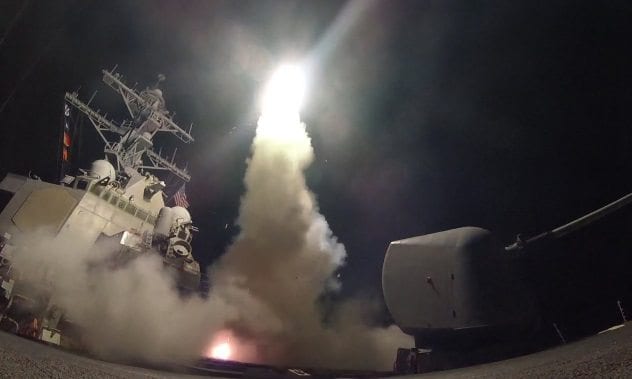 The image of cruise missiles streaking away into the night sky above Syria may be the one that comes to define Donald Trump’s presidency. On April 7, the US president authorized the bombing of an Assad regime airbase. It marked the first time in the civil war that the US has directly attacked Syria.

The bombardment came after President Trump witnessed graphic footage of a chemical attack by regime forces that killed 70 civilians in Idlib province. Apparently shaken by images of children gasping for air, the president ordered retaliation. The US bombardment disabled one of Assad’s airfields and killed seven regime soldiers. It also ended any chance of a US-Russia thaw under the 45th president.

So far, the fallout has been minimal. The White House seems to be ruling out further strikes unless Assad deploys chemical weapons again. Yet there are signs that things could be shifting elsewhere. On April 26, Israel bombed Syria, and the UK government is talking openly about launching strikes. It may be that Trump’s actions were the catalyst the world was waiting for. 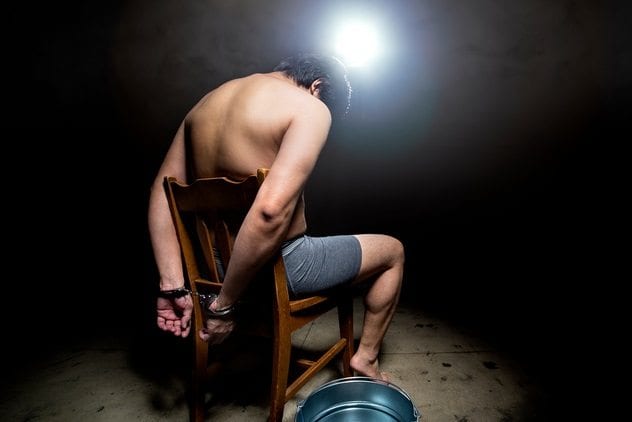 Homosexuality is legal in the Russian Federation, including in heavily Muslim Chechnya. It’s important to remember that as you read this. Early last month, Russian newspaper Novaya Gazeta published a shocking report into human rights abuses in Chechnya. They revealed that security forces were rounding up the region’s gay men, herding them into makeshift concentration camps, and subjecting them to extreme torture.

Detainees were stripped, beaten, starved, electrocuted, and, in three cases, murdered. Those who disappeared were lured in by “honey trap” operations, where security forces posed as gay men online, or else had their names revealed by friends under torture. At least 100 have so far been detained, with Chechnya’s bloated thug of a president, Ramzan Kadyrov, boasting that he will “eliminate” all gays in the region within one month.

In a country where homosexual relationships are legal, this is unprecedented. The violence on display and the collusion of the security forces all point toward the sort of pogrom more associated with the USSR than modern Russia.

3 We Majorly Rewrote the History of Humans In America 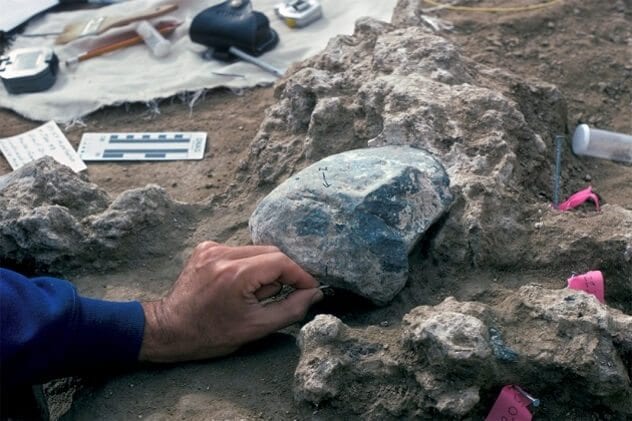 According to a new study published in the prestigious journal Nature, humanity arrived in the Americas 130,000 years ago. If you’re thinking that sounds like a long time ago, you’re not alone. If confirmed, it would mean that our ancestors reached the New World 100,000 years earlier than we thought they did.

In scientific circles, this is what is known as “kind of a big deal.” Our understanding of the story of humanity is that America was untouched until some early Homo sapiens rocked up 15,000–20,000 years ago. Claiming that another hominid was strolling around over 100 millennia before that is like telling a mechanic that the first automobile was invented by Julius Caesar. It just doesn’t make sense.

That’s exactly what some scientists think these claims are: nonsense. The researchers analyzed their samples using a controversial dating technique. But they’re not cranks, and getting published in Nature is something that just doesn’t happen to shoddy research. If their data checks out, this would be one of the biggest archaeological finds in decades.

2 Terror In Russia And Sweden And Fake Terror In Germany 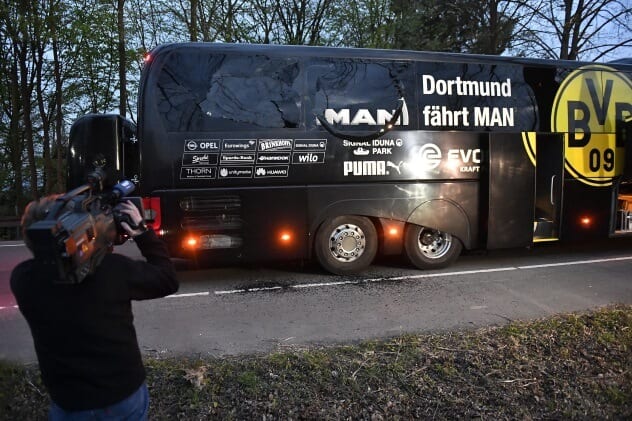 It’s a sad testament to the state of our world that we can’t remember the last time we wrote a news roundup that didn’t feature terrorism. Last month was no exception. On April 3, a man detonated a suicide vest on the Saint Petersburg metro. The explosion tore a hole in the carriage, killed 14, and left 50 injured. Nearly 20 days later, Al-Qaeda claimed responsibility.

Less than a week after tragedy struck the heart of cosmopolitan Russia, terror returned to Europe, this time in Stockholm. A failed, ISIS-inspired Uzbek asylum-seeker rammed a truck into a department store, killing four and leaving a dozen injured. Thankfully, a bomb planted on the truck failed to explode, limiting what could have been a horrendous death toll.

After all this, when a bomb went off beside the Dortmund soccer team coach on April 11 in Germany, it seemed likely that the perpetrators were yet more Islamists. Police even found a note referencing caliphates. But it turned out this was a case not of terrorism but of simple greed. A Russian-born German national had faked the terror attack in the hopes of driving down Dortmund team share prices, netting himself a $4 million profit. Instead, his crazy plan likely wound up netting him nothing but a lengthy jail sentence. 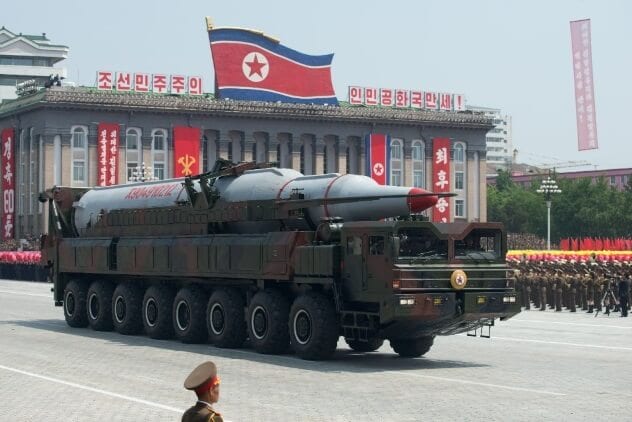 One of the last actions President Obama apparently took as commander in chief was to warn President Trump that North Korea would be his gravest foreign policy threat. Well, here we are. The last month has seen the DPRK prepare for more nuclear tests and try to perfect cruise missiles capable of hitting the US. The White House has responded with talk of war. Tensions have reached boiling point. With someone as mad as Kim Jong Un at the helm, anything could happen.

If war does come to the Korean peninsula, it would make any recent conflict look like a walk in the park. Pyongyang has artillery permanently trained on South Korea’s capital Seoul. It’s estimated that 500,000 shells could hit the city in under an hour if war was declared. One of the best-case scenarios has 100,000 civilians being killed in the first few days, and that’s if the North doesn’t decide to also nuke Tokyo (something they have the technology to do). Kim would undoubtedly lose the war, but he’d take possibly millions of innocents with him. We can only pray that cooler heads prevail in this time of crisis.