Fans love to visit locations that are seen in their favorite TV shows and movies, especially restaurants, where they can eat the same food as the characters. Some of the restaurants served as the actual filming locations, and some were just the inspiration for the fictional versions. Here is a list of some of the most popular fictional restaurants that are real and can be visited. 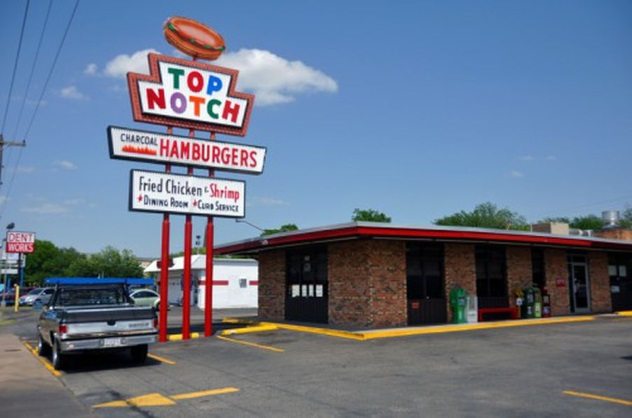 The film Dazed and Confused followed various groups of teenagers on their last day of school in the suburbs of Austin, Texas. The movie was filmed in various locations in and around Austin, but one of the more recognizable places was Top Notch Hamburgers.

Dazed and Confused was Matthew McConaughey’s first shot at an acting career. In his first scene of the movie, he pulls up in his Chevelle to Top Notch Hamburgers’s drive-in and starts talking to a redheaded girl. He then says one of his most famous lines that he still uses today: “Alright, alright, alright.” These were his first three words in a film.

The original Top Notch Hamburgers is located in Austin and still looks like it did in the movie. The restaurant is open seven days a week and serves burgers, fried chicken, fries, shakes, and more—alright, alright, alright![1] 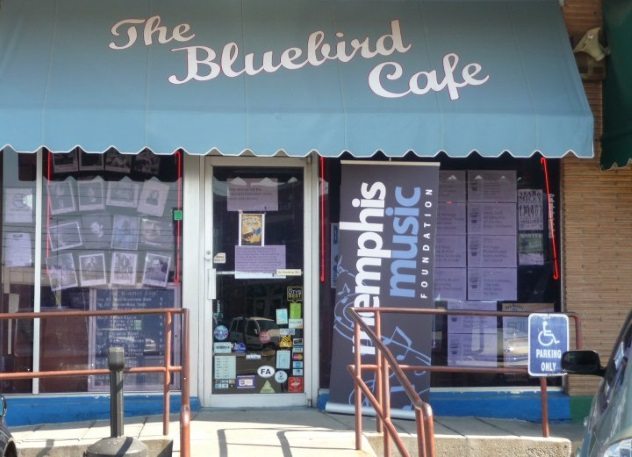 The Bluebird Cafe is a recurring location on the hit drama series Nashville. Some of the characters on the show work at the Bluebird, and it has also been the location for numerous performances by different cast members. The venue made its first appearance on the show in 2012. Ever since the cafe was introduced, millions of fans and aspiring artists have visited the restaurant, making it the top nightlife attraction in Nashville.[2]

The real Bluebird Cafe is located in a small strip mall outside of downtown Nashville. It is a small venue that seats less than 100 people and serves drinks, appetizers, salads, and sandwiches. The venue features up-and-coming artists and songwriters: Garth Brooks played at the Bluebird before his fame. The restaurant has been a Nashville staple for over 30 years, and more than 70,000 people visit it annually. 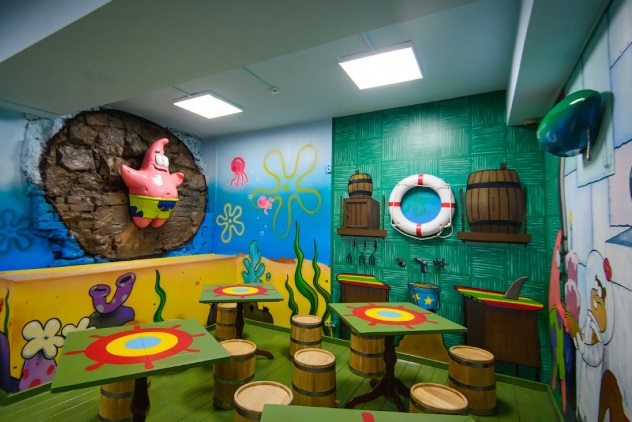 Who lives in a pineapple under the sea? SpongeBob! SpongeBob SquarePants has proven itself to be one of the most popular cartoons on television, and it is about the adventures of SpongeBob and his friends, Patrick, Squidward, Gary, and Sandy, who live under the sea. He also works for Mr. Krabs at the Krusty Krab restaurant. A real-life version of the restaurant is now open in Moscow.

The restaurant features ship barrels for chairs as well as tables that resemble ship steering wheels that are seen in the show and even sells the famous Krabby Patty burgers. The walls are painted just like the restaurant in the cartoon, and there are also figures of SpongeBob, Patrick, and Squidward located around the establishment. The Krusty Krab Cafe has a huge menu, including pizza, burgers, pasta, soups, salads, desserts, and more. The dreams of chomping down on a Krabby Patty burger have now been made into a reality.[3] 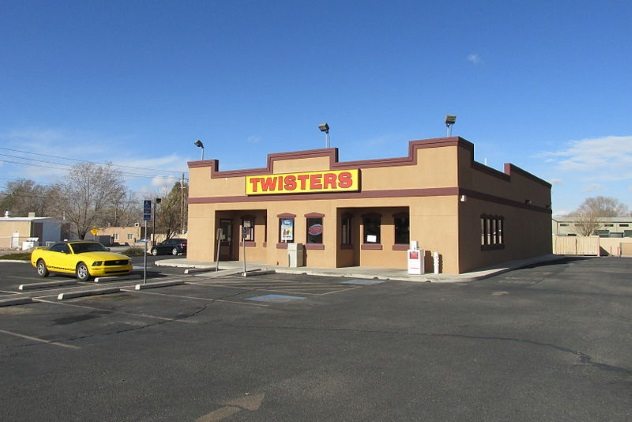 Fans of the hit TV show Breaking Bad will know Los Pollos Hermanos as a chicken fast-food establishment that is regularly visited by many characters on the show. The drug kingpin Gus Fring uses its locations as a front for his crystal meth empire. And the main character, Walter White, visited the restaurant many times.

Los Pollos Hermanos doesn’t actually exist, but the building that was used in the TV show is actually a burrito and burger restaurant named Twisters in Albuquerque, New Mexico. Besides the name, it looks exactly like Los Pollos Hermanos from the show. The manager of the Twisters location claims that profits have risen since the restaurant was featured on the show, and fans have come from as far as China to visit and take pictures.[4]

Twisters is a chain with more than 20 restaurants located in New Mexico and Colorado. The chain is open for breakfast, lunch, and dinner and serves omelettes, burgers, and burritos. 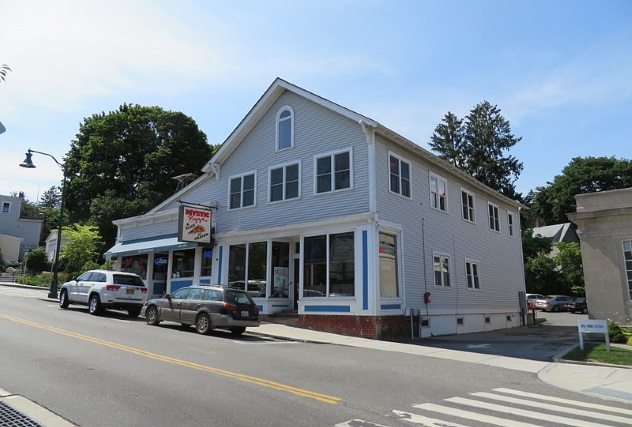 In 1988, the movie Mystic Pizza was released. It was about the lives and loves of three teenage girls working at a pizza restaurant in Mystic, Connecticut. The film featured actresses Annabeth Gish, Julia Roberts, and Lili Taylor. The Mystic Pizza parlor featured in the film is a real pizza place located in downtown Mystic.

The movie was filmed on-location in Mystic and the neighboring towns. Fans of the movie once lined the streets to enter the building where the film was made, but they still come to the location to try “A Slice of Heaven.” Since the movie put the restaurant in such high demand, they opened a second location, and they also sell frozen pizzas in grocery stores. Merchandise for the restaurant and movie can also be purchased at the restaurant gift shop.[5]

5 MacLaren’s
How I Met Your Mother 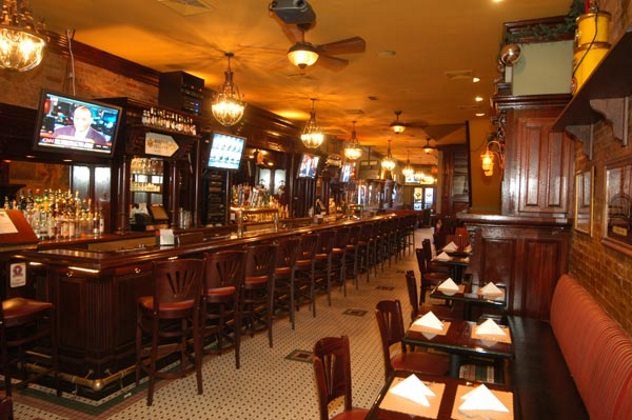 The hit TV series How I Met Your Mother aired on CBS from 2005 to 2014, and it was about a father who recounts to his children his journey with his four best friends leading up to how he met their mother. The show starred Josh Radnor, Neil Patrick Harris, Jason Segel, and others. The one place that could be described as the heart and soul of the show was MacLaren’s Pub. The bar is where they shared their fondest memories, including fighting for their favorite booth and bartending for the Arizona Tech marching band.

McGee’s is located only a few blocks from Central Park, the Theater District, and Times Square. They offer a How I Met Your Mother Monday with a special menu dedicated to the show. The pub also works with a TV and movie tour company, allowing visitors to tour the pub. Members of the tour also receive a special 15-percent discount.[6] As Barney would say, whenever you’re sad, stop being sad and be awesome instead—and go visit McGee’s Pub! 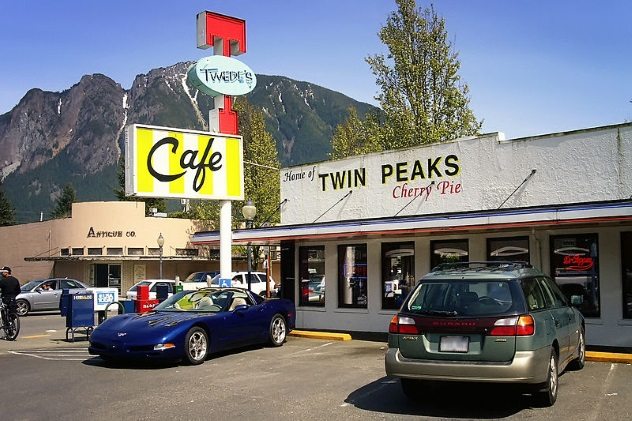 Fans of the show Twin Peaks will recognize Twede’s Cafe in North Bend, Washington, as the home of pie and coffee—the Double R Diner. On the 1990s show, the Double R Diner was owned by Norma Jennings and located in the peculiar town of Twin Peaks. The diner was based on Twede’s Cafe, and the fictional restaurant closely resembled it as well.

The cafe once looked just like it was seen on the show, but a fire has since completely gutted the building. It was remodeled after the fire, leaving fans of the show disappointed when visiting. When it was announced that the show was returning, the cafe was completely restored to look original. Those looking for the famous Twin Peaks cherry pie or “A Damn Fine Cup O’ Coffee” can find it at Twede’s.[7] 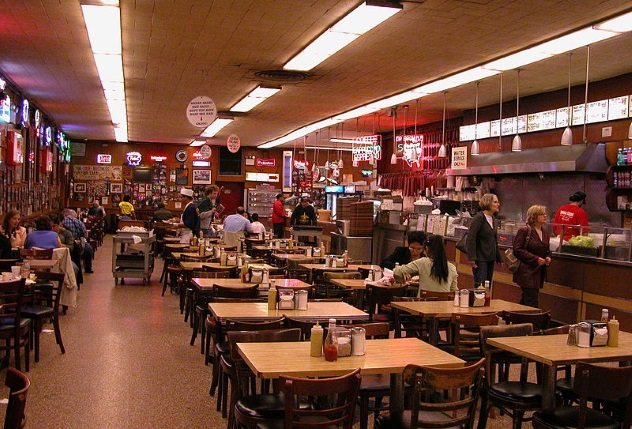 Katz’s Delicatessen has been serving pastrami to their customers since 1888, but a scene from When Harry Met Sally helped give the restaurant even more exposure. Meg Ryan and Billy Crystal can be seen having a meal at Katz’s Deli during the movie’s most iconic scene, and you can even take a picture or sit at the table from said scene.

The deli is located in Manhattan’s Lower East Side and serves more than 4,000 customers daily. The restaurant has looked the same for many years, and not much has changed on the menu, either. A Reuben sandwich was added to the menu 30 years ago, the cheesesteak was added ten years ago, and the cheesecakes were upgraded. The most popular dish is the pastrami sandwich, but Sally enjoyed the turkey sandwich in the movie. I’ll have what she’s having![8] 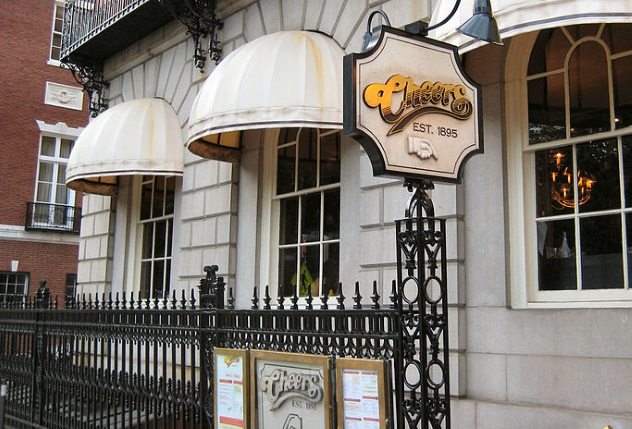 You can go where everybody knows your name and experience the bar that inspired the hit comedy and drama TV show Cheers. The bar was originally named Bull & Finch Pub when the producers chose the location for the inspiration of the show. The TV series premiered on September 30, 1982, and in that same year, Boston magazine chose Bull & Finch Pub as the “Best Neighborhood Bar” in Boston.

The bar is now known as Cheers and is found in the Beacon Hill neighborhood, and there is also a second location at the Faneuil Hall Marketplace. The inside of the bar looks similar to what is seen on the show, and they have a large gift shop that sells Cheers merchandise. The draft beer is served in a classic souvenir mug, and food on the menu includes the Coach’s Club Sandwich, Frasier’s Chicken Panini, and the Giant Norm Burger. If you finish the Norm Burger, you will earn a spot on the wall for all to see![9] 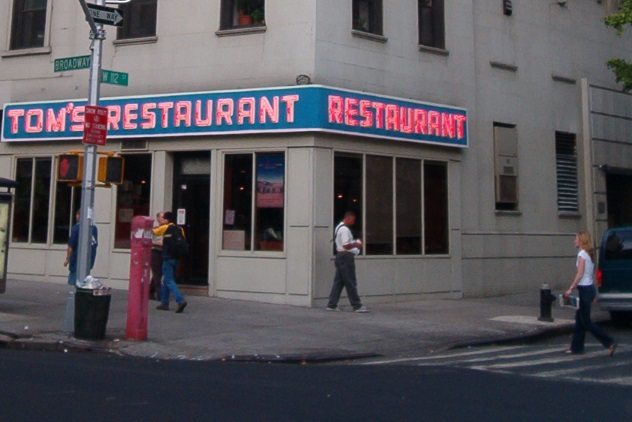 In the TV series Seinfeld, Jerry and his friends frequented Monk’s Restaurant and drank many cups of coffee while talking about their plans. It’s arguably the most recognizable New York City location on the TV show, and it was modeled after Tom’s Restaurant. Tom’s is located in the Upper West Side of Manhattan, but most of the filming of the restaurant was completed on a set in California.

There are many signed photographs as well as show memorabilia lining the walls of Tom’s. Fans of the show can even order a “big salad,” costing $17 after adding grilled chicken. The restaurant in the Morningside Heights neighborhood also serves burgers, sandwiches, soups, steaks, and all-day breakfast. Tom’s is just a couple of blocks away from Columbia University, and their affordable menu is a huge hit with students, especially since the restaurant is open 24 hours on Thursday, Friday, and Saturday. Tom’s claims the food is good for every order, because they “make it nice.”[10]

To find out where else you can traipse through your favorite on-screen locations, check out 10 Popular Film Locations You Can Visit In Real Life and 10 Movie Sets You Can Still Visit.