We all love to watch a good movie, but a lot of what makes that movie so good is the performance carried out by the actors. They spend months preparing for and playing their roles, but sometimes, their jobs are much harder than we even realize.

Some actors have to undergo shocking transformations to correctly fit their roles. At times, they will wear hideous makeup, grow out or cut their hair, grow a beard, or wear tattoos. But there are other times when they have to gain or lose considerable amounts of weight. Here are 10 times that actors underwent some amazing weight transformations for a film. 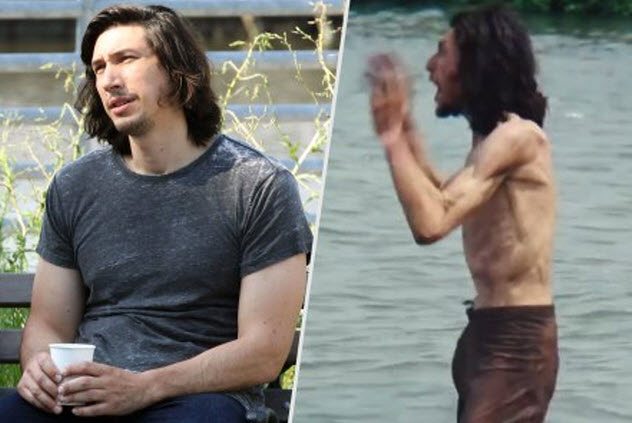 Adam Driver is best known for playing artist Adam Sackler on the HBO TV series Girls and for his movie roles in Star Wars: The Force Awakens, Paterson, and Inside Llewyn Davis. His acting debut in a feature film came in 2011, but there is one recent performance that Driver made the most memorable for his fans.

In 2016, Adam Driver starred in Martin Scorsese’s Oscar-nominated movie Silence. Driver played Francisco Garupe, a priest from Portugal who is traveling to Japan with another priest in hopes of finding their mentor.

Driver was asked to lose some weight for his role, and he reportedly dropped 18 kilograms (40 lb). When asked about making such a large weight transformation for the movie, Driver said, “I don’t think I’ve ever taken it to the extreme before. [ . . . ] You’re so hungry and so tired at some points that there’s nothing you can do.”[1] Some actors have gained large amounts of weight to play a part, and others have dropped so many pounds that they appeared sick. Jake Gyllenhaal had to muscle up for his leading role in the movie Southpaw. Gyllenhaal played Billy Hope, a middleweight boxer who prepares for a big fight that could help bring his family back together.

Gyllenhaal had just lost weight for the movie Nightcrawler and only weighed 67 kilograms (147 lb) prior to filming Southpaw. He had to work extremely hard to get in shape in time for filming and ultimately gained 13 kilograms (28 lb) of lean muscle.

He also developed a love for boxing. To shape up for the intense part, Gyllenhaal trained by jogging, jump rope, footwork drills, shadow boxing, bag work, tire drills, and strength and conditioning.[2] 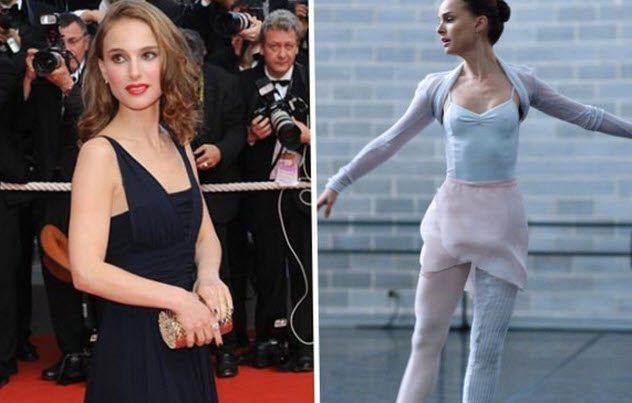 The fragile ballerina that we watched in Black Swan was very close to the real Natalie Portman during filming. Portman already has a tiny body frame, and she dropped an extra 9 kilograms (20 lb) to play Nina Sayers. She practiced up to 16 hours a day and hardly ate any food to prepare, which is much like the real life of a professional ballerina.

Portman had become so skinny that there were nights she thought she was going to die. She told Entertainment Weekly, “It was the first time I understood how you could get so wrapped up in a role that it could sort of take you down.”[3]

Her part as the Swan Queen landed her an Academy Award, a Screen Actors Guild Award, a Golden Globe, and more. The award-winning movie also starred Mila Kunis, who also lost a considerable amount of weight to play her part as the Black Swan.

7 Chris Pratt
Guardians Of The Galaxy Many know Chris Pratt as the happy-spirited and gullible Andy Dwyer from the award-winning TV series Parks and Recreation. He has also starred in the hit movies Jurassic World, The Magnificent Seven, and Guardians of the Galaxy. Pratt bulked up for his role in Guardians of the Galaxy and showed off a newly ripped body.

He stars in the movie as Peter Quill, an adventurer who rallies an unlikely team of misfits to prevent a villain from destroying the galaxy. Pratt went from the chubby funny guy to the shredded star of Guardians of the Galaxy.

He dropped more than 27 kilograms (60 lb) in six months by sticking to a strict diet and an intense training regimen. He started with four to six sessions a week that consisted of both bodybuilding and conditioning workouts.[4] The hard work paid off for Pratt, and he showed off his new body that was from another galaxy. Actors are always going over the top to make sure they fit the role correctly, but Christian Bale is arguably one of the best actors at doing so. He won an Oscar for his role in The Fighter, and he was nominated for The Big Short and American Hustle, all of which he made small transformations for.

He is one of the actors known to participate in the yo-yo diet, and he pushed his body to the most extreme for his part in The Machinist.

Bale shed 29 kilograms (65 lb) to portray insomniac Trevor Reznik in the movie. He survived on only an apple and a can of tuna a day leading up to filming, and he looked to cigarettes to help him control his appetite.

Bale lost 9 kilograms (20 lb) more than he was told to lose, and he even tried to lose an additional 2 kilograms (5 lb) before doctors advised him that it could possibly kill him. After filming for The Machinist, Bale only had four months to bulk up to play Batman in Batman Begins.[5] The South African–born actress Charlize Theron is one of the most beautiful and talented actresses in Hollywood. She transformed her model-like image for her role in Mad Max: Fury Road by shaving her head, but her biggest on-screen transformation was for the award-winning movie Monster.

In Monster, she starred as Aileen Wuornos, a Daytona Beach prostitute who becomes a serial killer. Theron gained 14 kilograms (30 lb) and wore prosthetic teeth to look more like the real-life serial killer. In fact, she was nearly unrecognizable in the film.

She played the part very well, and Monster was nominated for various awards. Her critically acclaimed role landed her an Oscar, a Golden Globe, and a Screen Actors Guild Award.[6] Matthew Fox is widely known for playing Dr. Jack Shephard in the hit TV show Lost, but there was a lot of discussion about his amazing transformation for the movie Alex Cross. He plays the antagonist, Picasso, who is a dangerous and sociopathic serial killer.

Fox lost 18 kilograms (40 lb) for the part, making him shockingly thin. But he was also ripped from intense workouts. He engaged in some hard-core training for about five months leading up to the film.

In an interview with E! News, Fox said, “The training sessions were mostly circuit training . . . nonstop from exercise to exercise, never taking any breaks for about an hour and a half. I was burning a lot of calories and working on certain muscle groups.”[7] 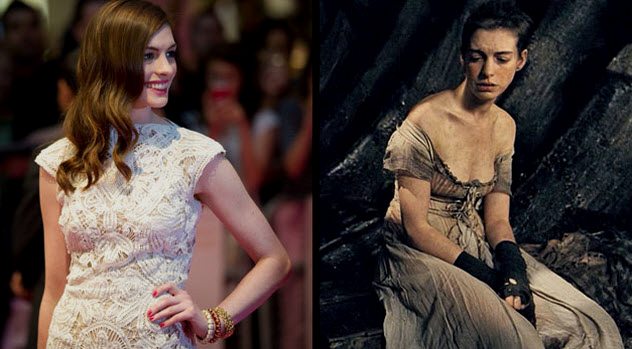 We have all seen Anne Hathaway grow into a talented actress since starring in The Princess Diaries. She has been in many hit movies since the beginning of her acting career, but she has never gone through such a large transformation as she did for her part in Les Miserables.

Hathaway plays the starving Fantine in her critically acclaimed performance. She lost a total of 11 kilograms (25 lb) for the part, with 7 kilograms (15 lb) lost in the last two weeks before filming.

The director never wanted her to lose the weight, but it was Hathaway’s idea to make the role seem more realistic. The character also has her hair cut during a scene in the movie, and she decided to have her real hair cut on camera instead of faking it.[8] The rapper turned actor has seen success on the big screen with roles in Get Rich or Die Tryin’, Escape Plan, and Spy. In All Things Fall Apart, the actor underwent a huge transformation to play a cancer patient. He stars as Deon, a college football player with cancer. 50 Cent wanted to play the part in tribute to one of his friends who died of the disease.

He dropped more than 23 kilograms (50 lb) in only nine weeks after sticking to a strict liquid diet and running on a treadmill three hours a day. While losing weight for the film, his manager told him that he needed to see a doctor before dropping any more pounds. But 50 Cent was determined to lose more.

“Toward the end, it was really difficult,” he told Parade. “It was like, if I don’t get close enough to what my best friend looked like to me at that point before he passed, then I’m not doing the story any justice.”[9] 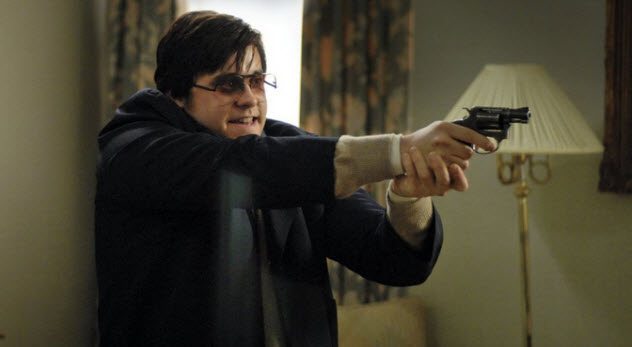 Jared Leto is the lead vocalist for the American band 30 Seconds To Mars, but he is also a familiar face in the film industry. He has landed roles in films such as Panic Room, Requiem For a Dream, Fight Club, Lord of War, and Suicide Squad.

He is no stranger to the yo-yo diet, changing his appearance for many roles, including his part in Dallas Buyers Club. He played Rayon, an HIV-positive transgender woman, and he lost over 18 kilograms (40 lb) for the performance that landed him an Oscar and a Golden Globe.

Leto gained a whopping 30 kilograms (67 lb) for the 2007 movie. After packing on the pounds, Leto suffered from gout and high cholesterol. He mostly gained the weight by eating microwaved pints of ice cream mixed with olive oil and soy sauce.

Alexandra Milchan, a producer of the film, said, “Jared’s performance is worth watching the movie for. It’s shocking, astonishing, and amazing in every way.”[10]