Copper is one of the first metals used by humans. Starting at roughly 5000 BC, the Copper Age, or Chalcolithic period, witnessed a radical transition from the primitive stone technology of the Neolithic to the metal-crazed Bronze Age. For millennia, copper was the principal engine of the world economy.

The most abundant prehistoric metal artifacts, copper alloys provide archaeologists with windows into the ancient past. A soft metal, copper is poorly suited for weapons but ideal for jewelry and ornamentation. Into it, we have carved the story of civilization.

10 Lost Treasure Of The Copper Scroll

Discovered by an archaeologist on March 14, 1952, the enigmatic Copper Scroll stands in stark contrast to all other Dead Sea Scrolls of Qumran Caves. The material, author, script, language, and style all suggest that it was added to Cave 3 at a different date than the 14 other works made of parchment and papyrus. According to Professor Richard Freund, the Copper Scroll is “probably the most unique, most important, and least understood.”[1]

In 1955, unable to unroll the corroded scroll, researchers had to break it apart to access its content. The language within bore little similarity to that of the other Dead Sea Scrolls. Dated between AD 25 and 100, the copper scroll contains a list of 64 locations where fabulous treasure could be found. It references enormous caches of gold, silver, tithing vessels, and priestly vestments worth over a billion dollars in today’s money. 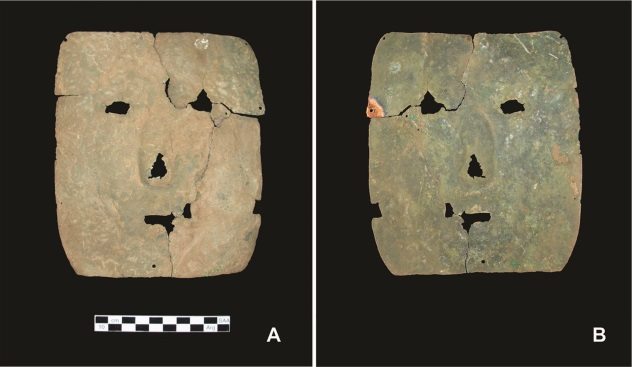 In 2005, villagers in La Quebrada in the Argentine Andes discovered an ancient copper mask that is rewriting the history of metallurgy in pre-Columbian South America. Found in a mass grave, the copper mask dates between 1414 and 1087 BC. The mask is 18 centimeters (7 in) high, 15 centimeters (6 in) wide, and 1 millimeter thick. Holes provide openings for the mouth, nose, and eyes. Additional holes along the edge allowed it to be fastened to a person’s face.[2]

The 3,000-year-old mask “pushes back the timeline for the production of an intentionally shaped copper artefact in the Andes,” noted researchers. Archaeologists believe the death mask’s ore came from the Hualfin Valley. Located 69 kilometers (43 mi) from the discovery, this valley in the Catamarca province is currently home to a major copper mine. Given the local source, experts hypothesize that copper smelting emerged independently in Argentina and the Peruvian Andes. 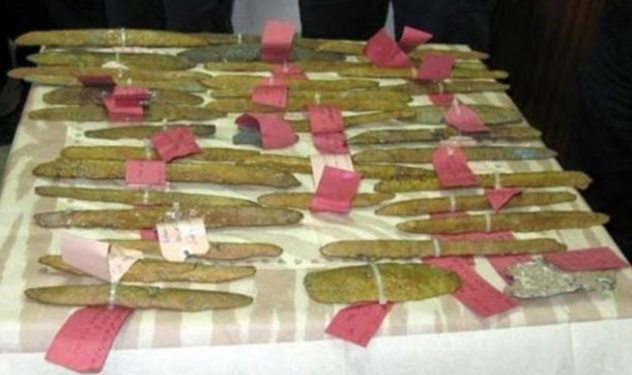 In March 2015, marine archaeologists announced the discovery of 39 ingots of “Atlantean” copper in a shipwreck off Sicily. According to Plato, orichalcum was a red-hued variant of copper, considered second only to gold, that the Atlanteans used to give the temple of Poseidon its otherworldly glow. People have long debated its composition. Most modern scholars believe this bronze-like alloy was created with zinc, charcoal, and copper. Others suggest that orichalcum is amber.[3]

Unfortunately, there was nothing mythical about the metal discovered in the 2,600-year-old Greek vessel. It is likely that the copper shipment originated in Cyprus. Since the fourth millennium BC, Cypriot metallurgists have produced several copper variants—including an alloy with zinc and small traces of iron and nickel, known as orichalcum. Given its durability and resistance to tarnishing, it was highly prized for jewelry and ornamentation. To this day, Greek-speaking Cypriots still refer to copper as oreichalkos. 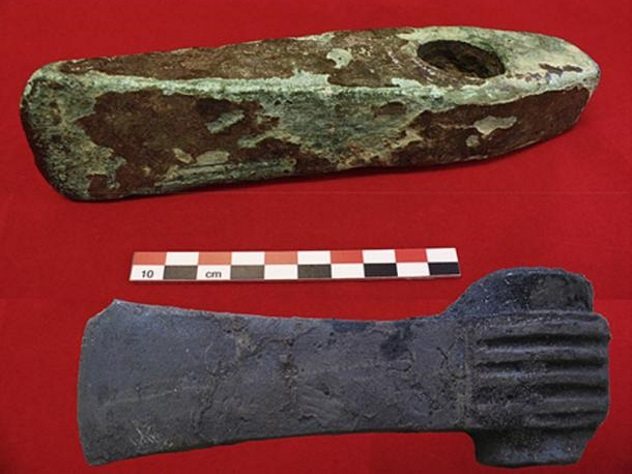 In 2016, archaeologists announced that ancient bronze tools from Sweden contained Mediterranean copper. Dated back 3,600 years, these instruments reveal far-reaching Bronze Age trade. It is likely that Scandinavians traded their precious amber, considered as valuable as gold, for copper. Isotope analysis revealed that the metal came from Cyprus, Sicily, Sardinia, and the Iberian Peninsula. Researchers do not believe these southern metal sources served as the basis of Scandinavian metallurgy but rather represent a trickle from distant sources.

Archaeologists now believe they have discovered images of Mediterranean vessels in Bronze Age Swedish rock art. In Bohuslan, a common rock painting feature is what appear to be ancient ships alongside Cyrpiot “oxhide” ingots. These vessels are almost always accompanied by images of large bulls. Coincidentally, this was a common motif of the Hittites and Minoans. In fact, many of these massive horned animals correspond closely to images found in Southern Turkey.[4] 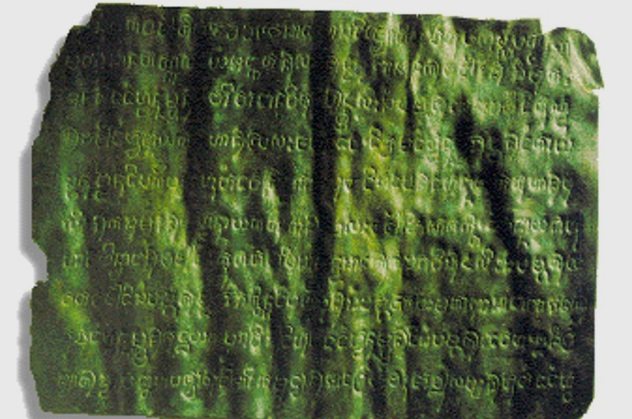 In 1989, a man dredging sand for concrete in the Lumbang River discovered the oldest known written document in the Philippines. Dated to AD 900, the Laguna Copperplate Inscription cloaks a thin copper plate measuring 20 by 30 centimeters (8 x 12 in). The plate’s significance almost never came to light. Seeking profit, the man who found it sold the copperplate to an antiquities dealer. It was only when the dealer failed to find a buyer that the ancient document came to the attention of researchers.[5]

In 1992, Dutch anthropologist Antoon Postma deciphered the inscription. It uses a blend of Old Kawi script and the Old Malay language developed in Java. Scholars have long believed that tenth-century Philippines were culturally isolated from the rest of Asia. The Laguna Copperplate Inscription directly challenges this notion, attesting to foreign influence in the region. The plate specifically references the year 822 in the Saka calendar, which originated in India. 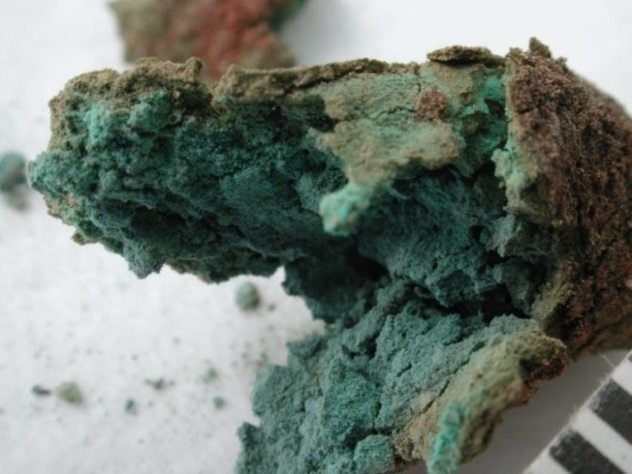 We know less about the origin of copper smelting than initially thought. For decades, archaeologists have believed that the Turkish site of Catalhoyuk held the honor of the world’s most ancient copper production. Dating back to 8,500 years ago, Catalhoyuk was considered the single origin point of copperworking. For more than four decades, traces of slag, a by-product of copper melting, have been found throughout the site. However, it turns out that Catalhoyuk’s copper may have been fired accidentally.

Most of the slag samples were only “semi-baked.” According to University of Cambridge’s Miljana Radivojevic, this indicates a “non-intentional, accidental copper-firing event.” What’s more, researchers discovered that some of what had initially been considered slag was actually burned dye. Researchers now believe that copperworking developed independently, at different points around the globe. Fellow researcher Thilo Rehren warns, “Not every piece of semi-molten black and green stuff from an excavation is necessarily metallurgical slag.”[6]

4 Ax Of The Iceman 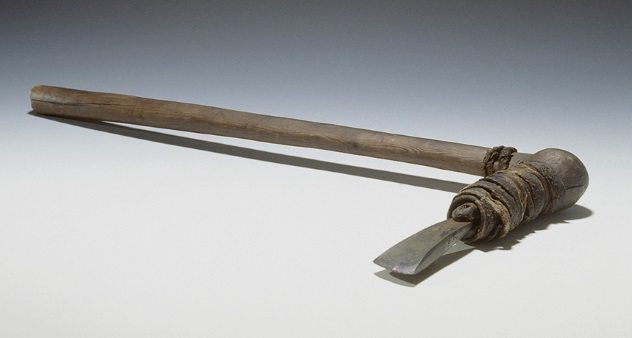 In 1991, hikers discovered Otzi the Iceman sticking out of a glacier in the Otzal Mountains on the Italian-Austrian border. Dated to 5,300 years ago in the Copper Age, Otzi was killed by an arrow to the back and remains one of the world’s earliest known murder mysteries.

In July 2017, researchers made a surprising announcement about Otzi’s world. His copper ax was imported. Isotope analysis of the blade revealed that the copper used in the world’s oldest preserved Neolithic ax came from Southern Tuscany, hinting at extended networks of prehistoric trade. Initially, researchers believed the ore used was mined within 100 kilometers (60 mi) of Otzi’s final alpine resting place. It is unknown whether the finished blade or only the source material was imported from the south. Copper was mined in the Alps during this period. Why Otzi chose Tuscan material over locally sourced ore remains a mystery.[7] 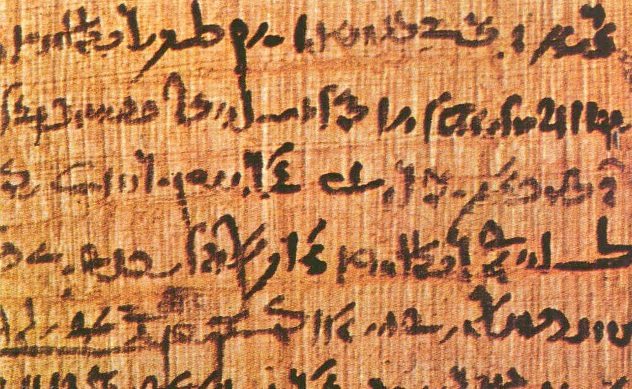 In November 2017, researchers published an article in Nature revealing the secret element to ancient Egyptian ink: copper. A team from the University of Copenhagen analyzed papyri from the second century BC to the third century AD. All the black ink from their samples contained copper. This is the first time copper-based ink has been found to have been used in ancient Egypt. The samples show no substantial variation across time or location and suggest a stable period of ink production techniques for at least 300 years. It is likely that the source material was a by-product of metallurgy.[8]

Egyptian blue is a legendary pigment created using by-products of copper metallurgy. Also known as calcium copper silicate, this is the oldest known artificial pigment. The earliest evidence exists in a tomb painting dated to the reign of Ka-Sen 5,000 years ago. When and where copper-based inks were introduced to Egypt remains a mystery. 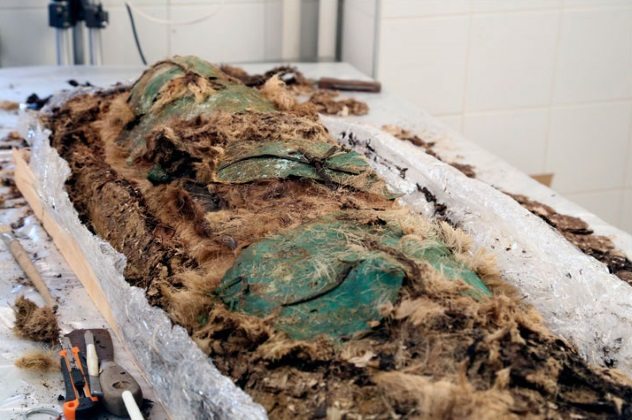 In 1997, on the Arctic edge of Siberia, archaeologists unearthed a 13th-century necropolis containing cocooned mummies plated head-to-toe in copper. The 34 graves of Zelenyi Yar have provided over a dozen naturally preserved mummies. Most recently, in 2015, researchers located the remains of the first known female at the location and an infant. Both were cloaked in burial cocoons of birch bark and furs. The baby was covered in remnants of a copper kettle, while the adult female was encased in copper plates.[9]

Little is known of the mysterious culture that built Zelenyi Yar. All of the necropolis’s remains have their feet pointing to the nearby Gorny Poluy River. Many of the men’s skulls are smashed, suggesting ritual significance. Dated to the tenth and 11th centuries, bronze bowls at Zelenyi Yar may have originated in Persia. The find suggests that this seemingly isolated location was actually a crossroads of cultures. 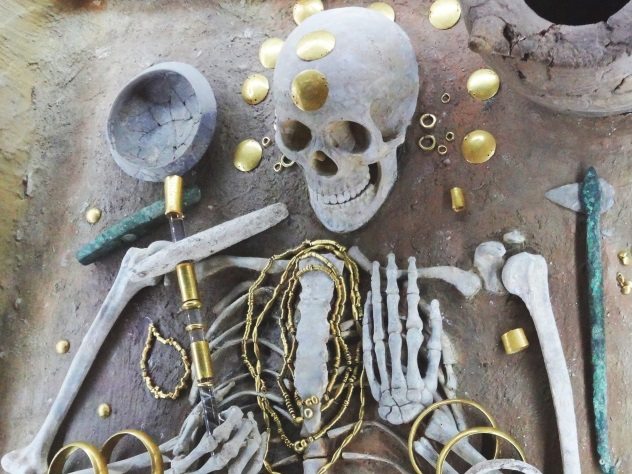 In December 2017, a team of researchers from the UK and Serbia announced that aesthetics played a key role in the development of copper alloys. The group developed a color chart for alloys composed of copper, tin, and arsenic to reveal the original glory of these ancient alloys, now tarnished with age.[10]

The components used in prehistoric copper alloys have been largely unknown. Copper loses its visual appeal after years buried beneath the earth. The researchers were inspired by modern jewelry techniques, which employ similar color charts for gold-copper-silver alloys. Researchers believe that the golden hue of ancient Balkan bronze was inspired by a demand for gold in the region. “It is now highly likely the production of this new alloy in the Balkans at the same time as gold could have been dictated by the demand for the ‘exotic’ golden hue, or its closest imitation,” noted team member Miljana Radivojevic.

A leading authority on occult music, Geordie McElroy collects incantations and spell songs fro the Smithsonian and private collectors. Dubbed the “Indiana Jones of ethnomusicology” by TimeOutLA, he is also frontman of Blackwater Jukebox.