The second-smallest and innermost of the four Galilean moons, Io, was first documented by Galileo Galilei in January 1610. Io, along with moons Ganymede, Europa, and Callisto, proved to Earthlings that our pale blue dot was not the center of the universe, galaxy, or even the solar system, since these four satellites seemingly orbited Jupiter as opposed to us. While Galileo kept his observation secret for years to follow because of the Catholic Church at the time, his documentation of Io paved the way for some very strange findings concerning this moon in subsequent centuries.

Referred to as Jupiter’s “pizza moon” due to its bright and blotted landscape, Io has also been regarded as a moon of fire and ice since it resides in an utterly cold place in our solar system (nearly 400 million miles from the Sun), but, unlike Jupiter’s other moons, it emits massive amounts of heat despite its small size. As a highly volcanic place (perhaps a bit of an understatement after reading further below), modern-day scientists have observed a hellish landscape in the cosmos if there ever was one.

In true sci-fi fashion, Galileo named Io “Jupiter I,” but the moon was given its mythological name in the mid-1850s. Coined after the priestess of Hera (Zeus’s wife), Io’s heavenly body was one of many that Zeus (the counterpart for the Roman god Jupiter) had a fling with. In Greek mythology, Io transformed into a cow to avoid being caught by Hera, a fitting story due to the moon’s strangeness and almost shape-shifting landscape of oddities. Below are ten out-of-this-world facts about Io, one of the strangest natural satellites in our corner of the cosmos. 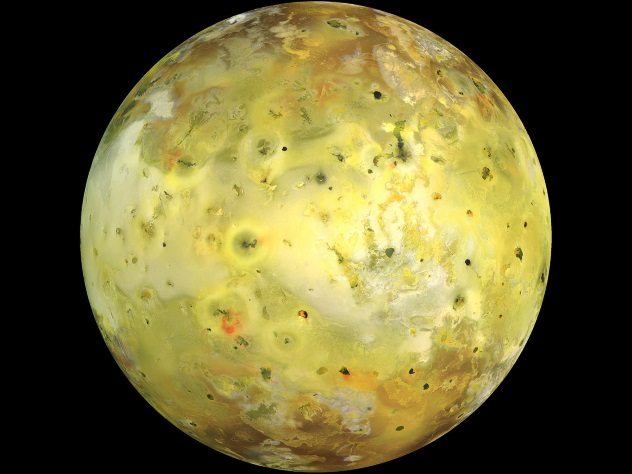 Io is one of the driest places in the solar system. When Io originally formed around Jupiter, it occurred in a region filled with water ice. Scientists believe that water existed on Io after its formation. However, any water that may have existed on Io in the past has long since been removed from the landscape by Jupiter’s intense radiation.[1]

This doesn’t mean scientists have ruled out the possibility of life existing in Io, rather than on. If any life exists on “Jupiter I,” it would most likely be organisms deep in the crustal rocks of the moon. So, if you were hoping to find E.T. on a place like Io, you might need to search underground so as to protect from the radiation! 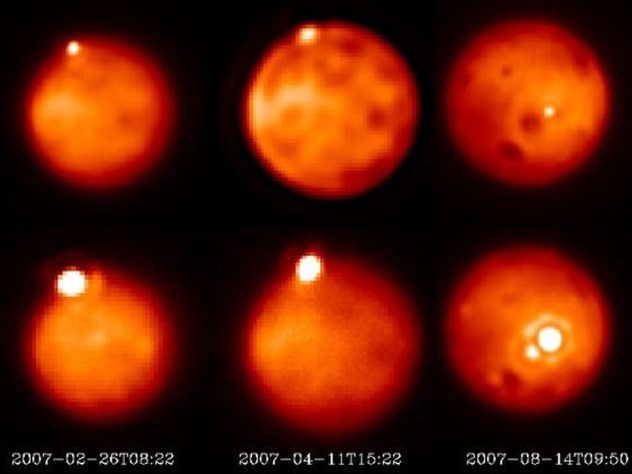 Io is extremely volcanically active. We’ve all heard of the Mount St. Helens eruption of 1980 in Washington, the Mount Vesuvius eruption in AD 79 that left the ancient city of Pompeii encased in ash, or the Yellowstone supervolcano that lies below the state of Wyoming. However, these pale in comparison to what occurs on Io. In fact, hundreds of volcanoes exist on the little moon and are the primary contributor to weather on Io’s surface.

Io’s volcanic eruptions are so powerful that they can be seen from telescopes here on Earth.[2] The explosions occurring on Io are said to cover hundreds of square miles within seconds. Some single eruptions have been said to emit 20 trillion watts of energy and blow plumes of debris completely off of the moon’s surface and into space. Sometimes, plumes of sulfur, rock, and debris reach 400 kilometers (250 mi) above the surface. The eruptions on Io are usually thousands of times more powerful than anything occurring on our planet. After eruptions, Io’s volcanoes can create rivers of lava flowing hundreds of miles long in some cases. 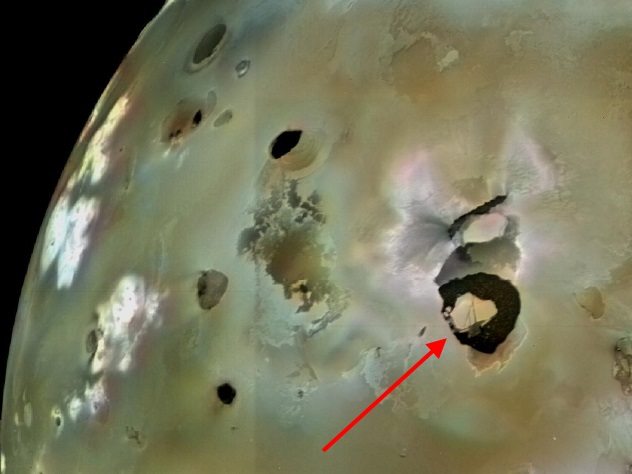 Beneath Io’s surface are moon-spanning seas of magma. Squeezing, squishing, and sloshing underneath the moon’s crust, this gelatin-like layer of magma fuels Io’s intense volcanism, therefore allowing Io’s surface to literally float upon liquid rock. This underground reservoir of liquid rock is 50 kilometers (30 mi) thick and explains why Io is by far the most actively volcanic place in the solar system.

Recently, scientists have estimated that Io, while only having a diameter roughly as wide as North America, releases 100 times more lava than all volcanoes on Earth combined. On one region of Io, named Loki Patera after the Norse trickster god, a single volcanic depression spans 204 kilometers (127 mi) and is constantly filled with magma from below the surface.[3] Believed to be an exposed sea of lava, it would be millions of times larger than any “sea” of lava found on Earth. 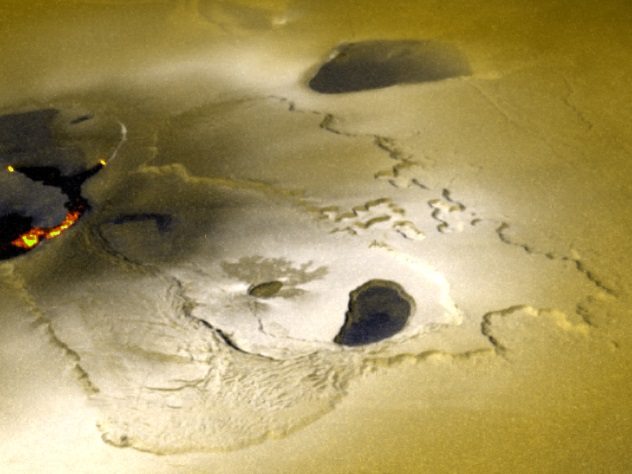 Temperatures on Io vary radically. Out of all the moons in our solar system, Io may have the widest-ranging temperature fluctuations on its surface. Some areas of Io that are dominated by large-scale volcanic activity can hit an astounding 1,700 degrees Celsius (3,100 °F), hotter than the surface of Mercury.[4] With Jupiter’s radiation and such high temperatures, any visitors to Io will need some pretty intense sunblock. However, generally, Io is a very cold place.

Away from these hot spots of volcanic activity, Io sees surface temperatures plummet to –153 degrees Celsius (–243 °F). NASA’s Galileo spacecraft observed that nighttime temperatures on Io are nearly the same around Io’s equator as near the poles. Astonishingly, this is nearly the exact opposite as what occurs on Earth, as equatorial regions receive more sunlight than polar regions. 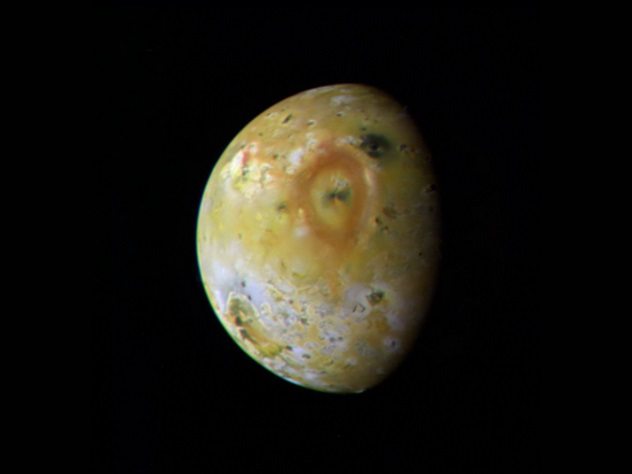 Io might be the stinkiest place in our solar system, period! As if bone-chilling temperatures, hot spots in the thousands of degrees, and a lack of water weren’t making your life difficult enough on Io, it also smells like rotten eggs.[5] Why? Io’s thin atmosphere consists mostly of sulfur dioxide (puffed out from its volcanoes). Io’s atmosphere also has few other trace elements, letting that nasty sulfur dioxide ceaselessly linger in Io’s air.

The ongoing volcanic eruptions act as giant gas-makers, giving the moon a rather pungent smell. However, these gases also contribute to the creation of Io’s atmosphere (even if it smells terrible), which makes it unique among moons, since most are simply devoid of any atmosphere. So, air that smells like stinky eggs or the vacuum of space? You’ll asphyxiate in either one, of course. 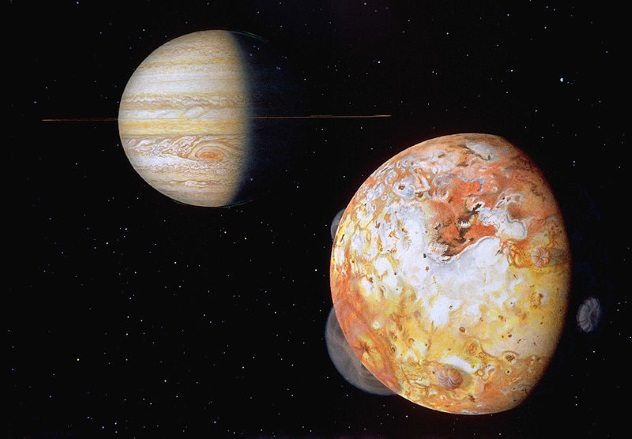 Since Io’s atmosphere is mostly sulfur dioxide, this aides in turning Io into a very ionized place. Io’s orbit around Jupiter passes through intense magnetic fields, thus turning Io into an orbiting electric generator. However, what’s amazing about this is not solely the charged atmosphere that gives way to huge lightning storms, but due to Jupiter’s magnetic forces, Io has roughly a ton of surface material peeled away every second. That’s some serious weight loss!

The material that is stripped off of Io quickly becomes ionized, forming a cloud of intense radiation around the moon. Scientists refer to this as a plasma torus.[6] Io is also one of the few places where this type of phenomenon occurs in our solar system, adding to the list of oddities connected to this moon. Unfortunately, scientists tend to agree that such radiation probably means that there is most likely little chance that life is forming on Io (though they haven’t completely ruled it out) compared to its chances on other moons orbiting Jupiter, such as the icy moon of Europa. 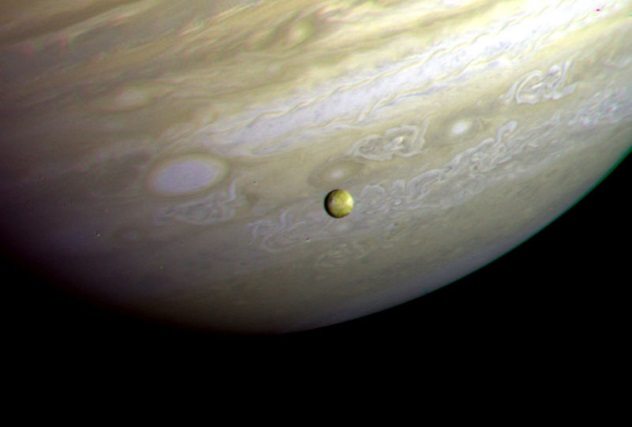 Io has one of the shortest years in the solar system. Think time goes by fast on Earth? Well on Io, its year (orbital period around Jupiter) is a mere 42 Earth hours long.

While it takes Earth’s moon roughly 27 days to finish an orbit around our planet, Io’s year in comparison is incredibly fast! Interestingly, Io’s year is nearly the same length of time as is its day (1.8 Earth days).[7] 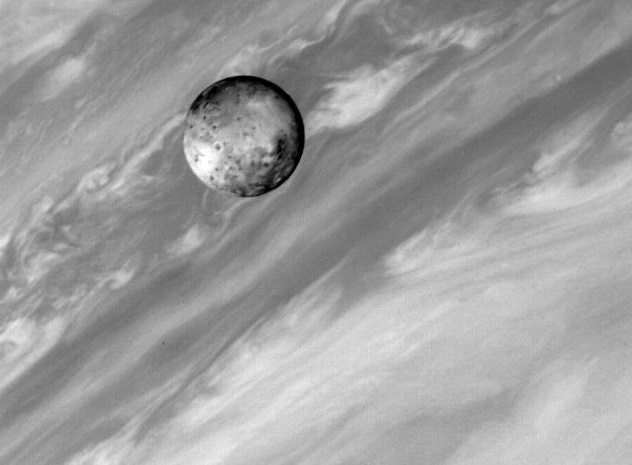 Now this is pretty strange. Like kneading dough, Io’s surface is constantly being tormented by Jupiter’s incredible gravity. This means that the moon is always being stretched and squeezed by Jupiter, thus forcing it to change shape as the magma inside is squished like gelatin. Referred to as tidal heating, Io’s surface can bulge up and down by hundreds of feet on a daily basis during this process.[8]

Other moons, such as Europa and Enceladus, undergo tidal heating as well, creating huge ice cracks in the former and erupting ice geysers on the latter. 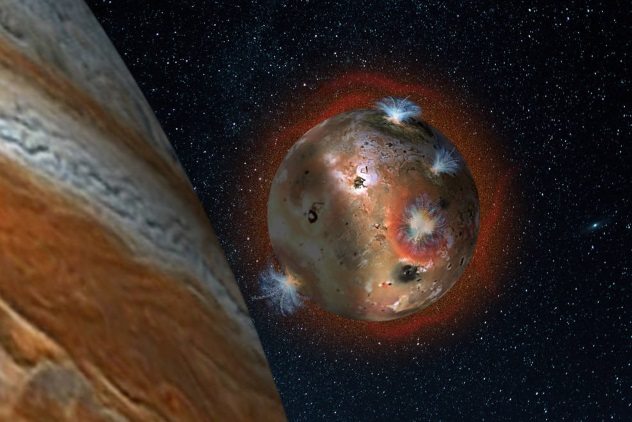 Every day on Io, sulfur snow falls to the ground. Unlike water crystals here on Earth, which fall to the ground after freezing in the sky, Io’s “snow” is a little bit stranger. For two hours every Io year, the moon passes into Jupiter’s enormous shadow. This blocks sunlight from warming Io’s thin atmosphere. While in Jupiter’s shadow, the frigid temperatures immediately cause the sulfur dioxide in the atmosphere to fall to the surface as sulfur snow. The gas billowing out of Io’s volcanoes also immediately freezes, contributing to sulfur particles dropping.

Additionally, this shadow effect has something truly alien occur: Io’s atmosphere essentially collapses during these short Jovian eclipses.[9] After about two hours, when sunlight begins to reach Io’s surface, Io’s atmosphere is reborn as the sulfur snow that fell returns to a gaseous state (also known as sublimation). Therefore, Io’s atmosphere is in an endless cycle of collapse and rebirth as sunlight affects not only the temperature on the surface but also the existence of the atmosphere around the moon. 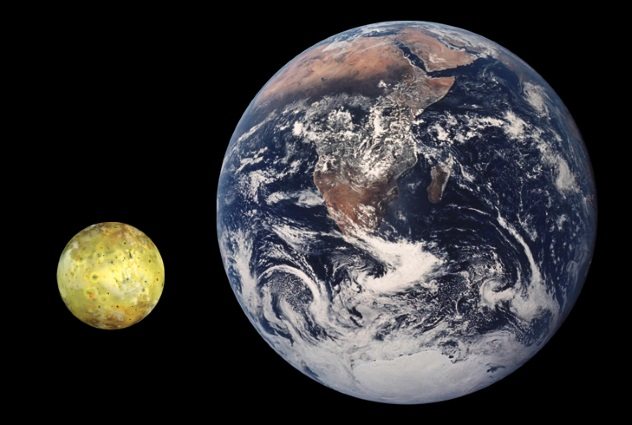 Jupiter’s moon Io is probably one of the strangest places imaginable in our solar system when considering its huge volcanoes, lava seas, stinky atmosphere (when one exists), and being bombarded by Jupiter’s immense radiation.[10] However, what fascinates Earthbound scientists so much about Io is not its geophysical oddities but how it gives us a glimpse into Earth’s history.

When Earth formed more than four billion years ago, it was a massive ball of magma being bombarded by asteroids falling into its own lava seas. It’s amazing to think that such an alien world so far away allows us to study the earliest of volcanic phenomena that may have occurred on our own planet. As this list of ten out-of-this-world facts about Io demonstrates, Jupiter’s innermost moon is truly a cosmic oddball.

Bryan Winter has a fascination with all things geographical, historical, and space-based. He holds a doctorate in geography from the University of South Florida.

Read about more amazing planetary satellites on 10 Facts About Moons That Just Might Blow Your Mind and Top 10 Amazing Moons.