The world was once filled with some absolutely incredible creatures. Thousands of years ago, massive and strange beasts roamed the planet. Most were so huge that they would tower over a man’s head.

We hear a lot about the dinosaurs that lived millions of years ago, but the world was far more diverse than Jurassic Park. There were all kinds of bizarre and amazing animals, each one looking like something torn right out of a fantasy novel.

10 Livyatan
The Whale That Ate Other Whales 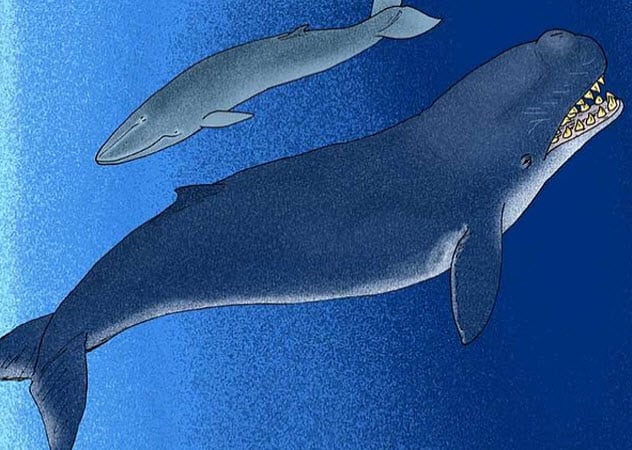 Twelve million years ago, a species of sperm whales called Livyatan melvillei lived off the coast of Peru. They were about as big as the modern sperm whale, with some growing up to 18.5 meters (60.7 ft). But there was one big difference: Livyatan melvillei had a huge mouth full of massive, tearing teeth.[1]

These gigantic whales preyed on other whales. Their mouths were something like those of modern killer whales except that they were three times bigger. Some of those sharp, crushing teeth in their jaws were 0.3 meters (1 ft) long and 10 centimeters (4 in) wide, custom-designed to bite into a whale’s flesh and tear it off.

These creatures had no natural predators even though they shared a sea with megalodons, the biggest sharks to have ever lived. Instead, Livyatan melvillei would prey on giant baleen whales. The whales of prehistoric Peru had to deal with being a meal for the two biggest and deadliest carnivores to ever live in the sea.

9 Paraceratherium
The Rhino Five Times Heavier Than An Elephant 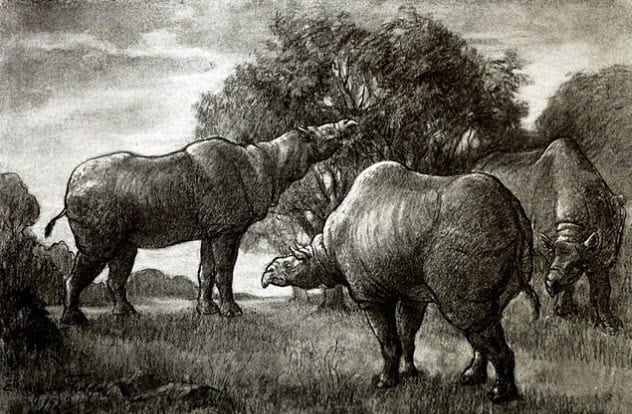 Paraceratherium may have been the biggest mammal ever to walk the Earth. It was a gigantic rhinoceros that stretched 7.5 meters (25 ft). Its shoulders towered 5.5 meters (18 ft) above the ground, but its craning neck could bring the whole creature up to an incredible height of 8 meters (26 ft).

More imposing than its height, though, was its weight. The biggest ones would grow to five times the mass of a modern elephant.

Paraceratherium didn’t have horns, but it was so big that it barely needed them. Inside its mouth was a set of teeth so huge that they’ve been compared to an elephant’s tusks. Paraceratherium also had a gigantic tongue that it used to rake trees clean with a single lick.[2]

Until recently, this creature was the undisputed largest mammal to ever walk the Earth—and it may still be. But it now has a competitor. Based on bone fragments, there’s a theory that an ancient Asian elephant called the Palaeoloxodon namadicus may have been even bigger. Nobody’s ever found a full skeleton of one of these elephants, but their thighs alone were nearly as big as a full-grown man.

8 Cygnus Falconeri
The Giant Swan That Lived With Tiny Elephants 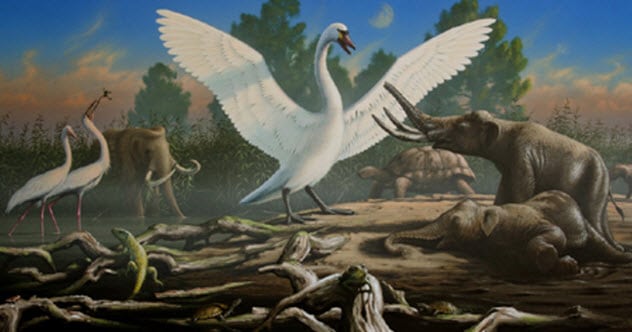 The island of Malta was once home to some of the strangest sights in the animal kingdom. Hundreds of thousands of years ago in the Middle Pleistocene era, the island was filled with pygmy elephants that were dwarfed by massive swans.[3]

Those swans, called Cygnus falconeri, were huge. They had wings that stretched 3 meters (10 ft). They were so big that they were incapable of getting themselves up into the air. Instead, they fed and lived on dry land. They were bigger than the surrounding elephants, which averaged about 80 centimeters (31 in) tall—about the size of a greyhound dog.

Most of the artwork depicting these giant swans shows them harassing and preying on the tiny elephants. Although we couldn’t find any proof that the giant swans actually preyed on the elephants, we love the mental image so much that we choose to believe that it really happened.

7 Platybelodon
The Elephant With Scythe-Like Teeth 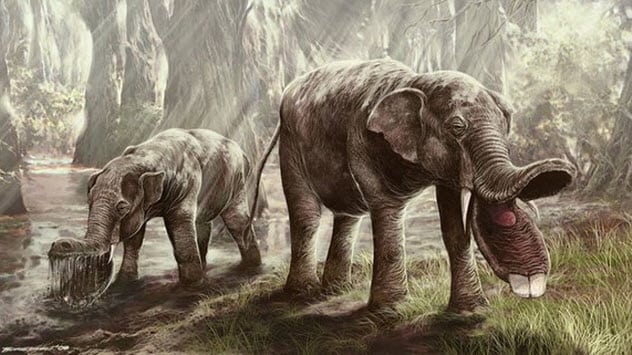 The Platybelodon might look a little strange, but it was a force to be reckoned with. These ancient elephants came equipped with incredibly long teeth that worked like scythes.

This early elephant had a huge, gaping jaw that kind of looked like a gigantic shovel—which is pretty much what it was used for. They had exceptionally long lower incisors that they could use to shovel up dirt and find things hidden underneath. Their incisors could also function like scythes to cut through thick vegetation.

Any giggling would have stopped the second you got to see one of these creatures in action. The Platybelodon would grab hold of thick tree branches with its trunk and hack them off with its huge teeth like it was chopping the branches with a machete.[4] 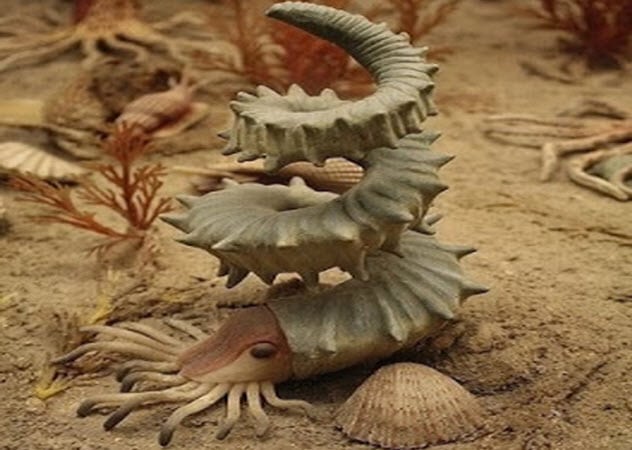 We’re used to seeing round spiral shells today. It’s the shape we’ve seen on mollusks and snails so often that it just seems like the only shape a shell could take. But millions of years ago during the Cretaceous period, those shells weren’t always quite so perfectly formed.

If you can imagine those spiral shells like a coiled rope and then visualize someone tangling that rope up, you’ll have a good idea of what mollusks called heteromorph ammonites looked like about 100 million years ago. These creatures had shells twisted into any shape you could imagine.[5]

Most were a chaotic mess. A genus called Nipponites had twisted shells that looked like tangled balls of string or a pair of headphones that had been in someone’s pocket for too long. Besides looking strange, they were probably also incredibly inconvenient. Scientists aren’t even sure how they managed to get around while dragging those things behind them.

A handful, though, were downright beautiful. Helioceras heteromorph ammonite was an ancient mollusk with a shell shaped like a spiral staircase ascending into the air. 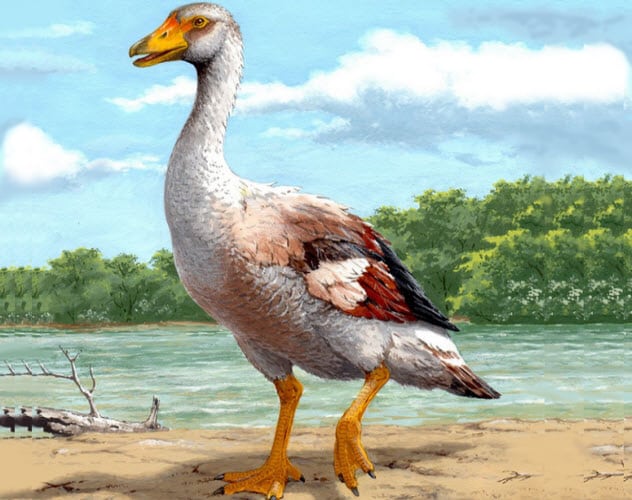 In ancient Italy, there was once a giant goose called the Garganornis ballmanni—and if you’ve ever been chased by a modern goose, you’ll understand why this was a creature worth being afraid of.

The Garganornis was a 23-kilogram (50 lb) beast with massive wings that it used to beat up other animals rather than to fly. Its wings were full of sharp, bony knobs that were specially designed to slap other animals in the face.

Garganornis didn’t necessarily go out looking for fights. It was a flightless herbivore that spent most of its time looking for plants to eat on dry land. While doing so, it might be attacked by some predatory bird that would swoop down and try to eat Garganornis. Probably the only meal found by the attacker was a hard knuckle sandwich from the Garganornis’s massive, bony wings.[6] 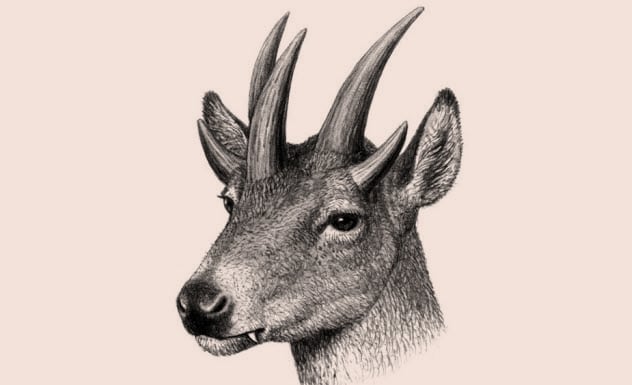 Living right alongside those big angry geese was an animal that would have fit in perfectly with every mythological creature: the Hoplitomeryx, the five-horned deer.

By all accounts, the Hoplitomeryx would have looked a lot like a modern deer. It would have been a bit bigger and had longer legs. Some even describe these creatures as giraffe-like. But all those subtle differences would have been easy to overlook next to its strange, jutting horns.[7]

In addition to the two horns that sit atop the head of a modern deer, the Hoplitomeryx had a second pair of smaller horns curving out above its eyes. And then it had a great big one protruding from the center of its skull.

Its teeth jutted out, too. Its canines, which flared out like curved swords, were so big that they would hang out of the side of the creature’s mouth even when its lips were sealed.

Together, these features created an effect as much majestic as it was terrifying. The horns looked almost like a crown resting upon Hoplitomeryx‘s head. Combined with the sharp, protruding teeth, these horns created something that looked a whole lot more intimidating than Bambi.

3 Leedsichthys
The Fish Bigger Than A School Bus 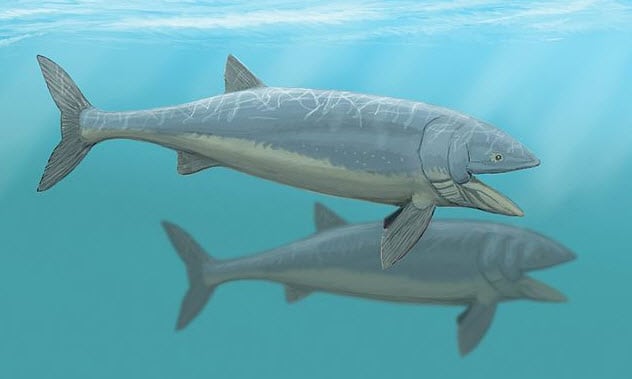 The largest fish to ever live was the Leedsichthys, a gigantic creature that once swam in the waters around Europe.

We’re not even sure how big it really was. Nobody’s ever found a full skeleton of Leedsichthys, so we can only take our best guess. However, even some of the most conservative estimates put the creature at about 17 meters (56 ft) long—larger than a school bus. Some wilder estimates suggest that Leedsichthys was even bigger than a blue whale.

The “bigger than a school bus” theory is the more likely one, but even that makes Leedsichthys the biggest fish ever to swim the Earth’s waters. These animals were so big that the gill rakers in their mouths have been mistaken for the jaws of dinosaurs.[8]

Incidentally, dinosaurs were their natural predators. Leedsichthys lived millions of years ago in the Mesozoic era, and it’s believed that a dinosaur would gnaw down on a gigantic fish the size of a small house every now and then. 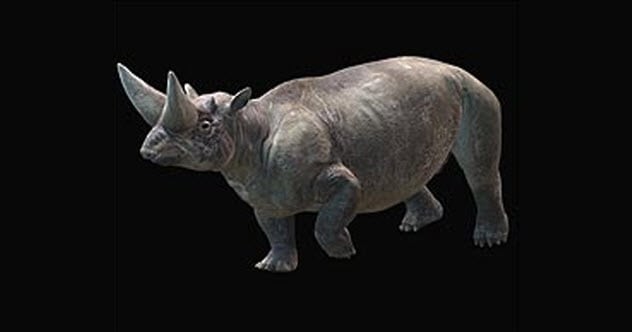 The Arsinoitherium would have been an intimidating animal to see face-to-face. It looked like a rhinoceros except that it had two massive horns jutting out of its nose.

These horns were a good 1 meter (3.3 ft) long and 0.3 meters (1 ft) wide. So if one gored you, you’d probably end up split in two. And just for good measure, Arsinoitherium had a second set of tiny horns on top of its eyes.

These creatures were more closely related to elephants than rhinos, and so they towered a good 2 meters (6.6 ft) into the air, well above most human beings. They were herbivores rather than predators. But if anything tried to attack them, they were clearly ready to defend themselves.

If you ever made one angry, the only disadvantage they’d have would be their legs. They had strange, stumpy legs that couldn’t be straightened.[9] So if one ever chased you, you probably wouldn’t have much trouble running away. 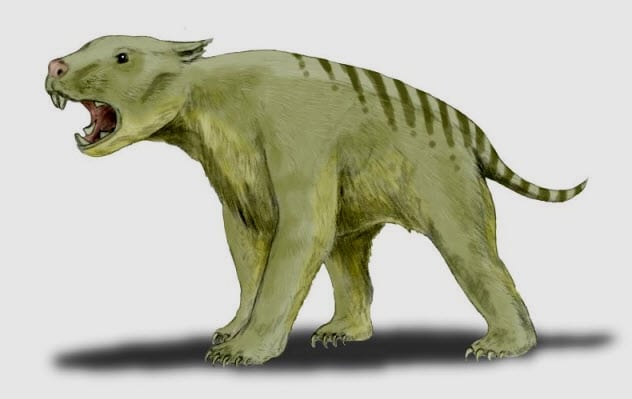 Without a doubt, one of the most terrifying animals of the prehistoric world was Thylacoleo, the mammal with the world’s strongest jaws.

These animals were about half the size of African lions, but they had jaws that may even have been stronger than those of the king of the jungle. Every inch of Thylacoleo‘s skull was designed for strength, so it had a fairly tiny brain. But giving up thinking was a small sacrifice to get that incredibly powerful bite.

Inside their mouths, they had huge teeth that were fused together, making them work like big, long, thick cleavers that could hack into flesh. The creature’s claws were just as bad. They had massive, curved claws that could retract like a cat’s to keep them razor-sharp. Thylacoleo could get up on its hind feet and use its unusually thick tail to balance itself like a tripod, freeing up its claws to hack and slash through the bellies of its prey.

Most likely, they were ambush predators, and they would have been brutal ones. They could climb trees. Then they’d lie in wait, leap out, and attack their giant kangaroo neighbors, tearing them limb from limb and feasting on their entrails.[10]