Burying people has been a common way of dealing with the dead across the world and throughout history. However, there is much variety within burials.

Social, religious, and cultural norms often decide how individuals are placed, whether they have burial goods, and what they are buried in (e.g., stone tombs or wooden coffins). Even with all the different burials that have been found in the archaeological record, there are still some ancient burials that are unique and eye-catching. 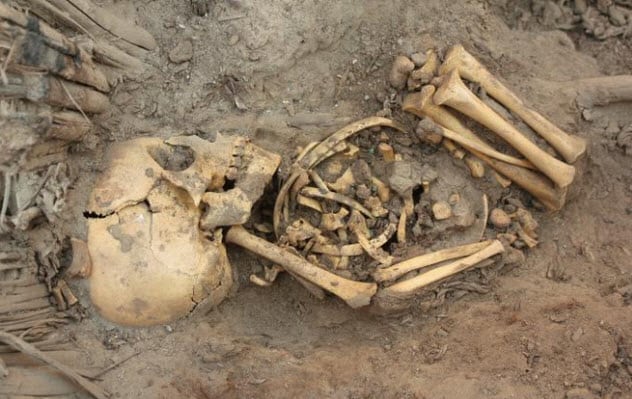 In Pachacamac, a site near modern-day Lima, Peru, a tomb was found containing roughly 80 individuals buried around AD 1000. They belonged to the Ychsma people, a pre-Incan population.

Half the individuals consisted of adults placed in fetal positions. Wrapped in textiles that are now mostly disintegrated, they had wooden or clay false heads lying on top of them.

The other half of the deceased consisted of infants arranged in a circle around the adults. The babies may have been sacrificed. They were all buried at the same time, and the Ychsma people had sacrificed infants in other burials. However, this is not certain as the skeletons don’t have visible evidence of it.

A large number of the adults had serious diseases, such as cancer or syphilis. They may have traveled to the site to be healed, a relatively common occurrence in pre-Columbian times. There were also skeletons of animals (such as guinea pigs, dogs, and alpacas or llamas) that had been sacrificed and placed in the tomb.[1] 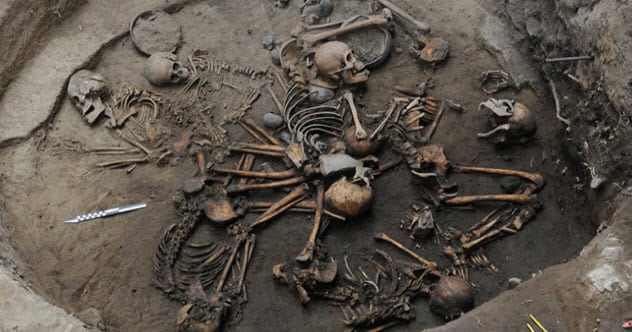 In modern-day Tlalpan, Mexico, archaeologists discovered a 2,400-year-old burial containing 10 individuals arranged in a spiral formation. Each individual had been placed on his or her side, with the legs pointed toward the center of the circle formed by the bodies. Their arms had been intertwined with those lying on either side.

Each skeleton was overlapping in other ways, too. For example, one individual’s head was placed on another person’s chest. The deceased consisted of people from all age groups, including an infant and an older child as well as young, middle-aged, and old adults.

Of the adults, two females and one male were identified. Two skeletons had skulls that had definitely been artificially modified. Some also had teeth that had been modified, a common practice at the time. The cause of death for these individuals is still unknown.[2] 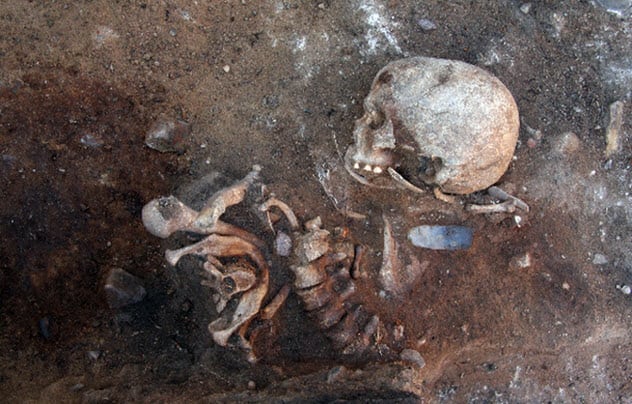 In a Mesolithic cemetery just north of modern-day Berlin, a 7,000-year-old male skeleton was discovered. Besides Mesolithic cemeteries being exceedingly unusual in themselves, this man had also been buried standing up, making him even more conspicuous.

Initially, he had only been buried up to his knees, allowing the rest of his body to decay for a bit before it was interred. The man was buried with flint and bone tools and had been a hunter-gatherer with a physically undemanding life.

Similar burials have also been discovered in the cemetery known as Olenij Ostrov in what is now Karelia, Russia. The large cemetery contained four individuals who had also been buried in standing positions at approximately the same time. No further connection between the man from Germany and the people in Russia have been found yet.[3] 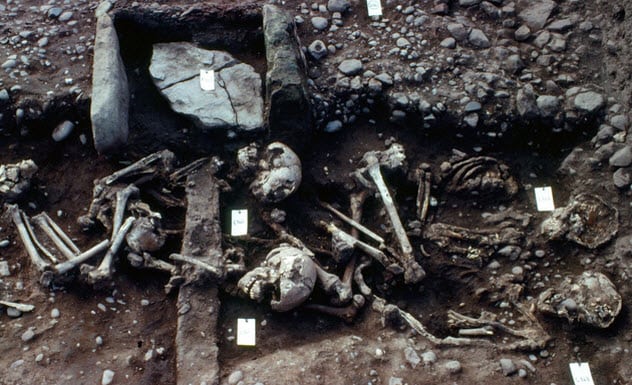 In Derbyshire, England, a mass grave was found that contained 300 soldiers from the Great Viking Army. Although this mass grave was not unusual, another grave next to it contained four individuals who were 8–18 years old. The children were placed back-to-back with a sheep’s jaw at their feet.

They were dated to the same time as the Vikings, and at least two of them had died from traumatic injuries. Their placement and potential cause of death has led researchers to believe that they may have been sacrificed to be buried with the fallen warriors.

This may have been part of a ritual for the children to accompany the dead soldiers in the afterlife. Although this is still conjecture, no similar grave has been found from this time in England.[4] 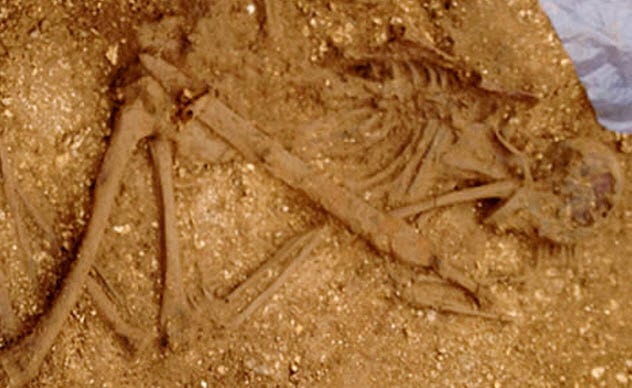 An Iron Age burial site found in what is now Pocklington, England, contained 75 burial chambers (aka barrows) with over 160 individuals. One of these burials contained a man in his late teens or early twenties who had been buried with his sword 2,500 years ago.

The distinctive part of his burial? After he had been placed in a crouched position in his grave, he had been stabbed with five spears. Four went down his spine while the fifth pierced his groin.[5]

The spears were placed so that they would have been sticking out from his burial mound—to be seen for years after his death. Researchers believe that the man may have been a high-ranking warrior who was ritualistically speared to release his spirit. 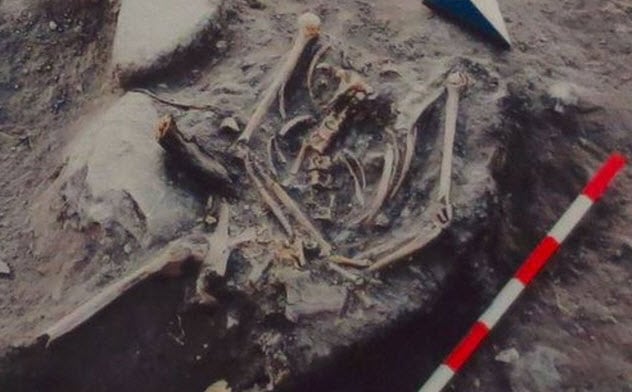 In modern-day Plovdiv, Bulgaria, a medieval female burial from the 13th to 14th century was found in the ancient Thracian and Roman Nebet Tepe fortress. It differed from the other burials found there as the woman had been placed with her face down and her hands tied behind her back.[6]

Although burials with people facing down have been found across the globe, it does not commonly include binding. The archaeologists who excavated her had never seen a similar burial in the area. They believe that it may have been a punishment for criminal activity, though that it is not a reaction to the vampire beliefs for which Bulgarian archaeology has received a lot of attention. 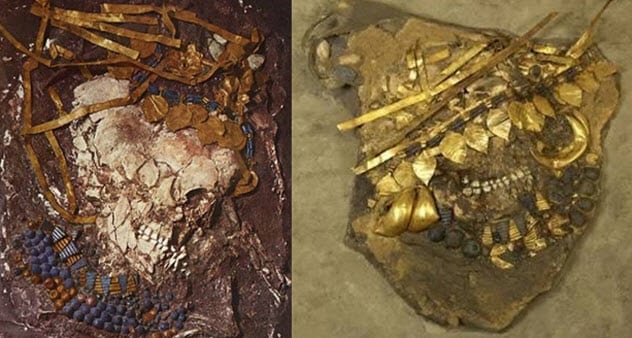 During the excavations of Ur in the early 1900s, there were six burials found without tombs that were dubbed “death pits.” The most impressive of these is the Great Death Pit of Ur, a burial containing six males and 68 females.

The males were laid to rest at the entrance. Wearing helmets and holding weapons, they were believed to be guarding the pit. Most of the females were neatly placed in four rows along the northwest corner of the pit. Two groups of six women were also in rows along two of the other edges.

All the women were dressed in expensive clothing with headdresses made from gold, silver, and lapis lazuli. One of the women had a headdress and jewelry that was much more extravagant than the rest. These pieces resembled those of Puabi, a Sumerian queen. It is thus believed that the dead woman was a high-ranking person and that the rest of the deceased were sacrificed to go with her to the afterlife.

Whether this was a voluntary or forced sacrifice is unknown. Two skeletons, one male and one female, had premortem skull fractures. None of the others had any visible injuries. Researchers believe that the victims consumed poison to kill them. The two injured people may have also been clubbed on their heads.[7] 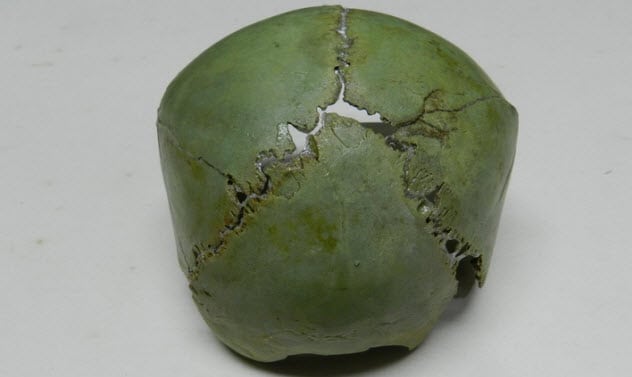 Mass graves containing babies are unusual, but several ancient ones have been discovered. In Ashkelon, Israel, a collection of bones belonging to over 100 infants was discovered in a sewer from Roman times. The babies showed no signs of illness or deformation and may have been killed as a form of birth control.

A similar burial containing 97 infants was found in the Roman villa at Hambleden, England. These remains are theorized to have been babies born in a brothel who were thus unwanted. Alternatively, they may have been babies who were stillborn.[8]

Another mass grave was found in a well in Athens, with remains dating from 165 BC to 150 BC. The location contained 450 infant skeletons, 150 dog skeletons, and one adult with severe physical deformities. Most of the infants were less than a week old. One-third had died from bacterial meningitis, and the rest had died from unknown causes. There was no evidence that their deaths were unnatural.

As babies were not considered to be real people until a ceremony performed 7–10 days after birth, it is possible that these babies had died before they were considered real humans and were thus disposed of in a simple way. 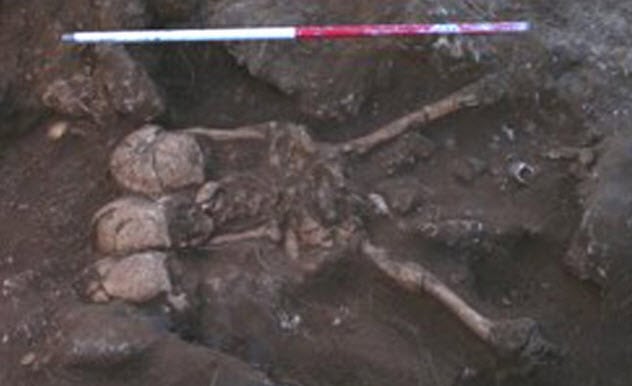 On Efate Island, Vanuatu, a 3,000-year-old cemetery was excavated with over 50 skeletons exhumed. Each skeleton was missing its skull. It was common for the Lapita people who lived there to exhume a dead body once its flesh had rotted and remove the head. The head would be placed in a shrine or somewhere similar to pay respect to the deceased.

All the skeletons were facing the same (unspecified) direction except for four who were facing south. These four had isotope levels indicating that they had originated somewhere other than the island unlike the rest of the individuals buried there.

One of these immigrants was buried with three skulls (taken from the local people) on his chest. This burial was the only one that included skulls and most likely indicates that he was admired in some way.[9] 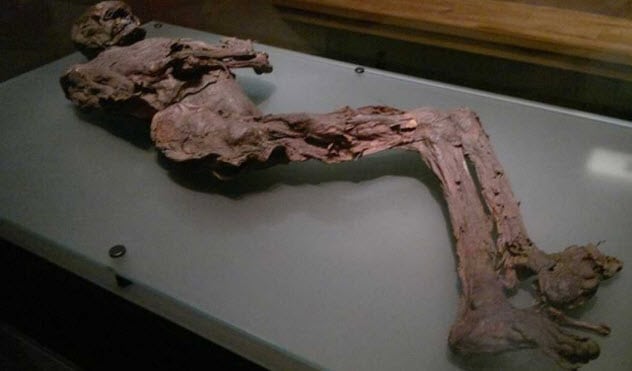 A study conducted on ancient burials on the British Isles found that there were at least 16 mummies created between 2200 BC and 700 BC. As this area of the world is cold and wet, which is not great for mummification, it is believed that they were created by being smoked over fires or intentionally buried in peat bogs.[10]

Mummies are not that unusual as they have been found in many parts of the world. However, several of these mummies seem to have been made up of multiple people. It is possible that only certain body parts were preserved during the mummification process and that these parts were cobbled together to create complete mummies.