We have depended on dogs to protect us for millennia. But judging from recent developments, it seems like they are not the only animals capable of protecting us.

Other animals have proven to be better than or on a par with dogs in providing security. Sometimes, these critters are trained to become guards, and at other times, especially in the instances of wild animals, they just happen to be natural deterrents. 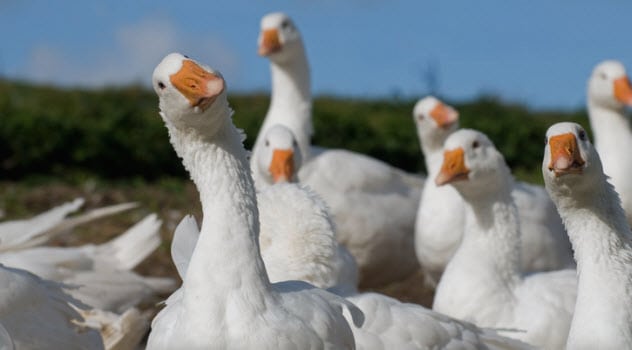 Geese are very good guard animals. They have better eyesight—both near and far—than we do. This allows them to pick out strange movements, no matter how small. They are also territorial and will make loud noises to frighten off intruders that venture into their space.

Unlike dogs, geese are difficult to bribe. Give them a treat, and geese will make very loud noises in excitement. While it could be their little way of showing appreciation, it is enough to alert their owners to the presence of an intruder.

Farmers use geese to guard their free-range chickens. Some remote police stations in China are also abandoning their guard dogs for geese. In one notable incident, a man was caught sneaking into a police station to retrieve a motorbike seized by the cops. The geese made loud noises, notifying the cops of his presence. The man was promptly arrested.[1] 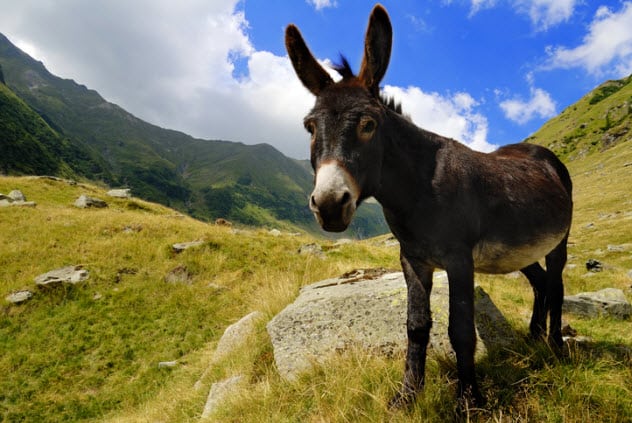 The donkey is often considered to be a slow, gentle, and dull animal. This could create a false impression for an intruder who does not realize that donkeys can be very aggressive and territorial. They are naturally hostile toward dogs, foxes, coyotes, and bobcats—which makes donkeys excellent guards for livestock.

When threatened, a donkey will bray loudly and launch aggressive attacks with its teeth and hooves toward every part of the enemy’s body. A charging guard donkey is very dangerous, even to its owners. Farmers using guard donkeys are advised not to approach the animal while it’s charging or immediately afterward. It needs to calm before an approach can be initiated.

Single castrated donkeys or female donkeys with foals make the best guards. The foal could even grow up to become a guard donkey itself. However, not all donkeys are good guards. Some will ignore wild animals, while others will strike back only when they are attacked.

The most cowardly of donkeys will flee the moment they detect a threat. Sometimes, they even become a threat to the same animals that they are supposed to protect. Some donkeys will refuse to guard livestock, preferring to mind their own business.[2] 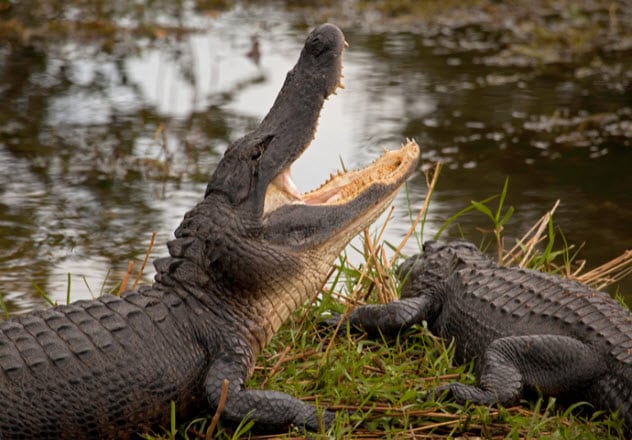 Drug dealers are known to use aggressive animals to protect their stash from criminals. Pit bulls used to be the animals of choice, but several drug dealers seem to be switching to alligators. Police departments across the US have been finding alligators guarding the homes of these criminals.

Drug dealers also keep alligators as status symbols or to just intimidate others. Obviously, no one will want to mess with the dude with an alligator. In Maryland, police recovered a 0.9-meter-long (3 ft) guard alligator from the home of drug dealer Michael Golden during a marijuana bust.

Golden did not have anything positive to say about the alligators, except that they had not been stealing his stash of marijuana. He said that the animals were crazy, unwise, and unable to be trained. The only time the creature listened to him was when he had some food in his hand. Obviously, the alligators are also threats to the drug dealers themselves.[3] 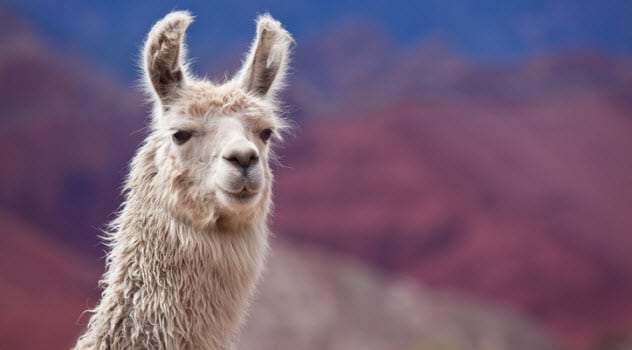 Llamas are excellent livestock guards. They are very effective against dogs and foxes, although they might not provide the perfect deterrent against humans. This does not mean that llamas will leave a random human to approach their livestock. They have been known to become irritated at the presence of strangers and will make a lot of noise and stamp their feet, which is enough to attract the attention of the farmers and deter the intruders.

Llamas also chase humans around their farms. While they might not cause injuries to humans, these animals have been observed chasing and killing foxes. Llamas make excellent livestock guards because of their suspicious and territorial nature. They are naturally suspicious of carnivores like dogs and wolves and will quickly attack when they get the opportunity.

Some livestock will also bond with llamas better than they do with dogs. Llamas may become so attached to the livestock that they will display aggressive behavior toward the pets or families of their owners. In these instances, farmers will need to separate the llama from the herd before the farmers can do anything to the herd.

Small groups of female llamas make the best guards. Small groups of castrated male llamas used to be the go-to animals, but they were usually more concerned with fighting over female livestock and territory. When these llamas bonded, they were more interested in moving around together, leaving the livestock unsupervised.[4]

Uncastrated male llamas are worse. They are usually more interested in attempting to breed with the animals they are supposed to be watching. This sometimes leads to the injuries or deaths of the guarded animals because the llamas are bigger.

Female llamas do not behave this way. They bond and keep watch together. Nevertheless, the gender of a llama does not guarantee that it will be a good guard. Some will flee at the sight of danger, leaving the livestock defenseless. 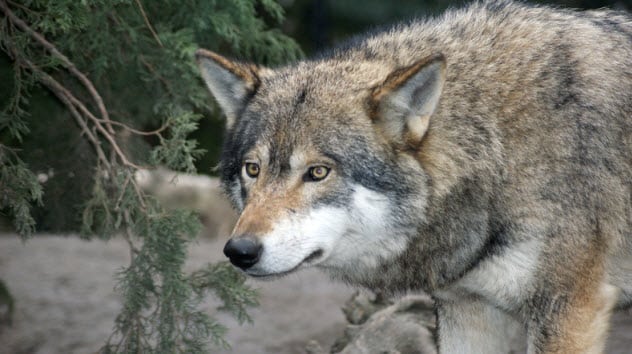 Residents of some villages in Kazakhstan are using domesticated wolves to protect themselves and their properties from wild wolves. The villagers are buying the wolf cubs for around $500 and breeding them into adulthood. The villages have been experiencing a rise in wolf attacks, and the government is not doing anything about it.

The guard wolves are treated like dogs. Some are even allowed to freely roam around the properties of their owners. One person said that wolves are calm animals and will never attack their owners as long as they are fed. However, some experts are skeptical about keeping wolves at home. They say that all wolves are wild animals and could misbehave at any time.[5] 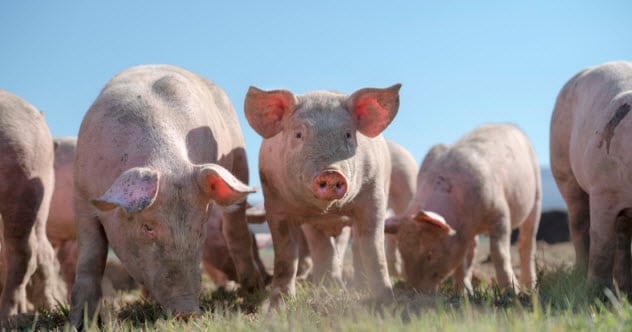 In 2003, an Israeli organization called the Hebrew Battalion revealed its plan to train pigs as guard animals. The pigs would have been used to protect Jewish areas in the volatile West Bank. Hebrew Battalion stated that pigs had a better sense of smell than dogs, making the swine useful in detecting weapons and bombs.

The plan raised some eyebrows in Israel where pig farming is banned. Jews consider pigs to be unclean animals. Considering these religious views, Hebrew Battalion needed to seek approval from rabbis before the program could kick off. The rabbis gave their approval. However, there are no news reports indicating that the Hebrew Battalion trained any pigs.[6] 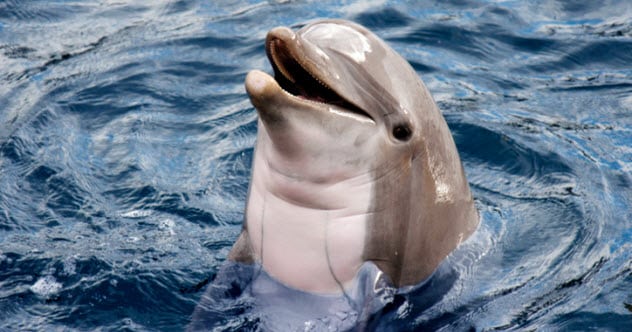 Dolphins also make good guard animals, although their use has been limited to the military. Under the US Navy Marine Mammal Program, the US military trains dolphins to guard ships, seaside installations, or other areas of interest. The dolphins run regular patrols around these areas.

Once a dolphin spots an enemy or detects a mine, the animal returns to its trainer’s boat to get a transponder that the dolphin then attaches to the person or mine. Thereafter, military officers are dispatched to retrieve the enemy diver or disable the mine.

There are unverified claims that the US Navy arms its dolphins with compressed gas needles, giving them the ability to kill enemy divers. The navy says that these claims are untrue. Nevertheless, it is possible that the CIA trained dolphins to plant bombs on enemy ships.

Between 1970 and 1971 during the Vietnam War, dolphins were used to guard an ammunition depot at Cam Ranh Bay, Vietnam. In 1987, they protected the US naval fleet in Bahrain during the Iran-Iraq War.

During the 2003 invasion of Iraq, dolphins were used to clear enemy mines around US ships. In 2012, they were deployed around the Strait of Hormuz to find mines dropped by the Iranian military. In the US, dolphins are on permanent deployment at Naval Base Kitsap, Washington, which contains nuclear weapons.[7] 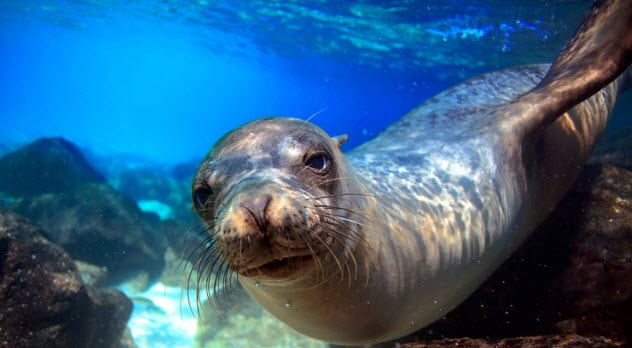 Sea lions are another marine mammal trained under the US Navy Marine Mammal Program. Like dolphins, sea lions are smart and relatively easy to train. Unlike dolphins, sea lions do not have sonar that allows them to use echolocation to detect underwater mines. But they make up for that with their superb eyesight. They are also amphibious, with the ability to switch between land and water.

The US Navy uses sea lions to guard military ships and installations, detect enemy divers and underwater mines, and recover items underwater. One of their most important roles is the recovery of unarmed mines used during training.

The sea lion goes underwater, holding a clamp in its mouth while searching for the training mine. Once it finds the mine, the animal attaches the clamp to the mine and let its handlers on the boat drag the mine up. Sea lions can also attach these clamps to the legs of enemy divers.[8] 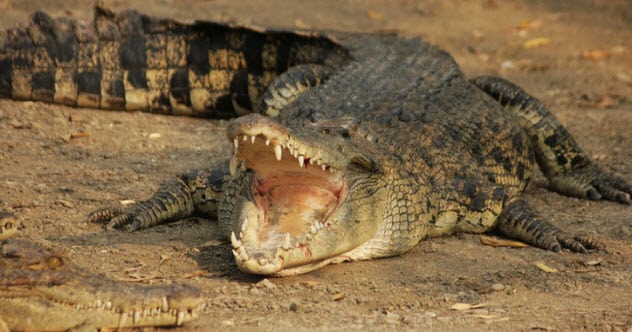 In 2015, Budi Waseso, the head of Indonesia’s antidrug campaign revealed that his country was planning to build an island prison that would be guarded by crocodiles. The prison would hold drug convicts on death row. Waseso said they settled for crocodiles because they could not be bribed like humans. To ensure that the crocodiles were effective, he promised to get the biggest ones available.

Indonesia’s antidrug campaign has often been sabotaged by corrupt prison officials who take money to allow drug convicts to escape. Sometimes, the guards even help the convicts smuggle their drugs. It is common for prison guards to be busted for drug crimes and even be imprisoned.

After being mocked over his plans to use crocodiles as prison guards, Waseso later revealed plans to use tigers and piranhas in the prison in case of a staff shortage. Let’s not forget, the staff members in question are the crocodiles. Slamet Pribadi, the spokesman for Indonesia’s antidrug agency, confirmed the plans to build a prison guarded by wild animals. He clarified that it was not a joke.[9] 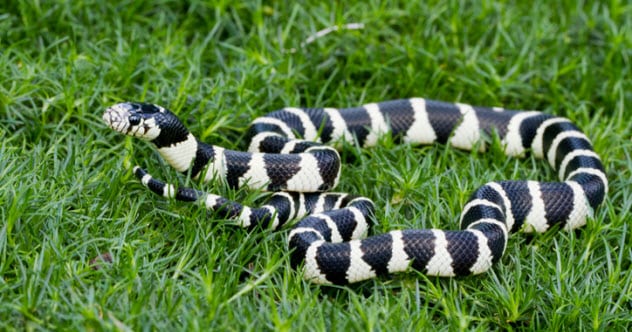 People in South Africa are increasingly using snakes to guard their homes and businesses against criminals and gangs. Snakes of choice include brown house snakes, California kingsnakes, pythons, and boa constrictors.[10]

Some businesses have up to six snakes guarding their properties. The co-owner of one business chased three thieves away after charging toward them holding a python. Some homes and businesses that do not keep snakes have “Beware of Snake” signs hanging somewhere. Others believe erroneously that snakes are better guards than dogs because snakes do not sleep.

This misconception probably arose because snakes do not have eyelids and leave their eyes open while sleeping. Nevertheless, it is not advisable to approach a still snake because it is impossible to know whether it is sleeping or just relaxing.

In 2007, luxury department store Harrods hired a live cobra to protect some expensive shoes during a launch ceremony. One pair of shoes cost $152,000 and contained rubies, sapphires, and diamonds.

Whether the snake was really hired to guard the shoes or was just a ploy to make the news was unclear. But a venomous cobra guarding a pair of shoes should be a deterrent for a would-be thief, whether it was really meant that way or not.

Read more surprising animal lists on 10 Animals That Don’t Look Dangerous But Are Actually Deadly and 10 Of The World’s Most Romantic Animals.