Earth and Mars have a lot in common. They have similar terrain, although Mars lacks the considerable amounts of water, oxygen, and atmospheric pressure required to support life as we know it. Compared to our planet, Mars also has less mass and a smaller size—a bit over half the size of Earth or two times the size of the Moon.

Although we might consider Mars a wasteland, its Earthllike properties make it more comparable to Earth than we think. These interesting similarities are the reason why many scientists believe that we could one day colonize the “Red Planet.” 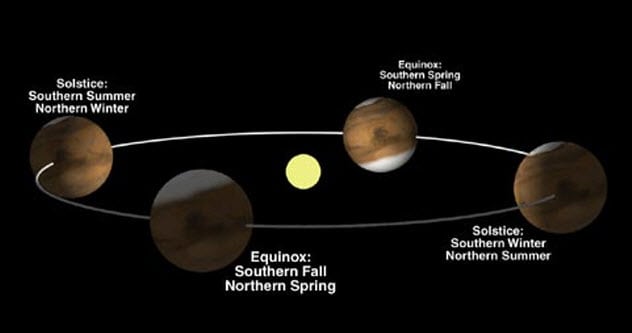 Like Earth, Mars has four seasons. Unlike Earth, where each season lasts for three months, the length of Mars’s seasons depends on the hemisphere.

To be clear, a Martian year has 668.59 sols (Martian solar days), which is equal to about 687 Earth days and is almost twice as long as an Earth year. In the Red Planet’s northern hemisphere, spring lasts for seven Earth months, summer is six Earth months, fall is 5.3 Earth months, and winter is a little over four Earth months.[1]

9 Mars Has Its Own Aurora

The colorful aurora lights are not exclusively an Earthly thing. An aurora can appear on any planet, provided the conditions are just right. Mars has one, too. Although we see colorful lights over here, a human on Mars will not see anything because the Martian aurora gives off ultraviolet light, which is invisible to the human eye.

However, researchers were able to observe this light with a special device attached to the Mars Atmosphere and Volatile Evolution missioN (MAVEN) spacecraft. Here on Earth, auroras are caused by charged electron particles colliding with the atmosphere. On Mars, they are caused by the proton-containing solar wind colliding with the cloud of hydrogen surrounding Mars.

8 A Martian Day Is Barely Longer Than An Earth Day 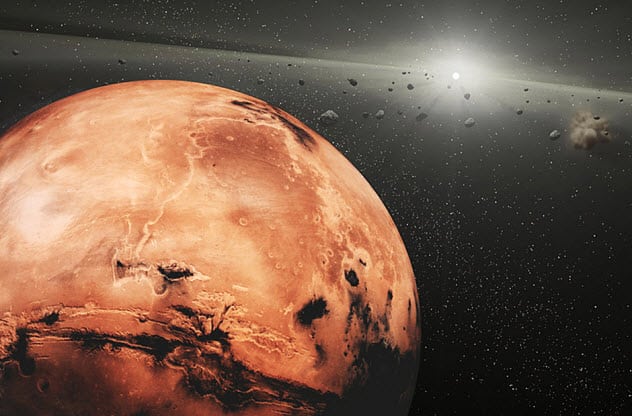 Planets are created when dust clouds released during the formation of stars lose momentum while spinning (revolving). The spin increases or decreases as the planet hits other objects in its neighborhood. They do hit a lot of things, so the rate of the spin changes a lot.

The planet soon clears and dominates its neighborhood. At this moment, it no longer collides with anything and maintains the spin it had the last time it hit something. 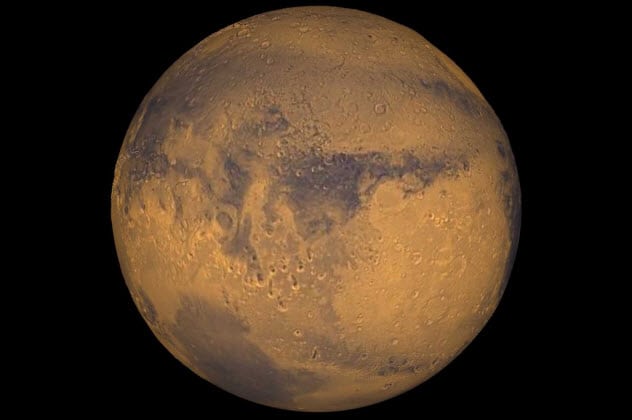 In 2008, NASA’s Mars Reconnaissance Orbiter (MRO) discovered water streaming down some slopes on Mars. The water only flows in the summer, which means it is frozen during the colder winter.

As we already mentioned, the Martian summer is much colder than Earth’s summer. However, streaks on Mars have been found where temps are above -23 degrees Celsius (-10 °F). Still, you would normally expect to find only frozen water there. So why does the water flow?

Scientists are unsure. But they theorize that it occurs because the water has a high salt content. Salty water has a lower freezing point than fresh water and will melt at certain temperatures at which fresh water would remain frozen.

An alternative theory is that the water is created after salt somehow managed to come in contact with ice. This could be true because salt melts ice.

Nevertheless, scientists will be able to offer better explanations when they determine the source of the water. For now, they are guessing that the water is from melting ice, underground water, or water vapor from the atmosphere.[4] 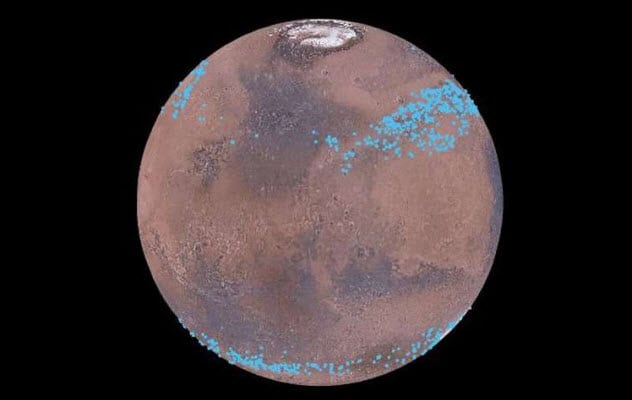 As on Earth, the north and south poles on Mars are covered in ice caps. However, in the northern and southern hemispheres, Mars also has belts of glaciers at central latitudes. We did not notice the glaciers earlier because they are hidden under a thick layer of dust.

The dust could be the reason that the glaciers have not evaporated. Mars has a very low atmospheric pressure, which causes any surface water or ice to immediately evaporate. Ice sublimates from ice to vapor without becoming liquid.

Scientists determined that Mars contains over 150 billion cubic meters (5.3 trillion ft3) of ice, which is enough to cover the entire surface of the planet 1 meter (3.3 ft) deep. Whether this ice is formed from frozen water, mud, or carbon dioxide is another issue.

Even if it consists of water, is the water the same as that found on Earth? Scientists are still studying this.[5]

5 Mars Has Its Own Falls 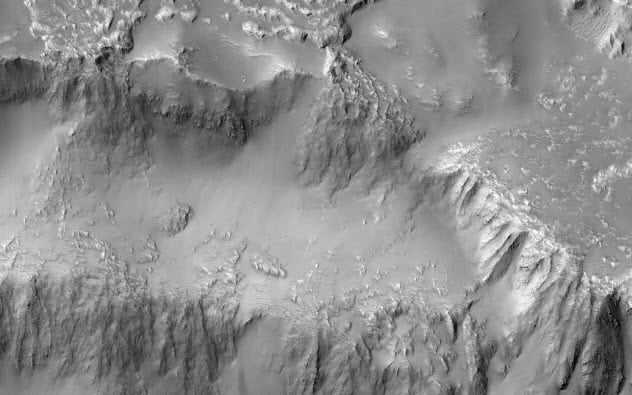 By analyzing images taken by NASA’s Mars Reconnaissance Orbiter (MRO), we have discovered the existence of a geological wonder akin to a waterfall here on Earth. However, the Mars waterfall is filled with molten rock (lava).

The lava spews from four different spots along a 30-kilometer-diameter (19 mi) crater in the Tharsis volcanic province as if it were a waterfall. This happens because lava behaves like water. On the other hand, the lava flows at a much slower rate because it is thicker than water and more susceptible to temperature changes.[6]

4 Mars Is The Only Habitable Planet Besides Earth 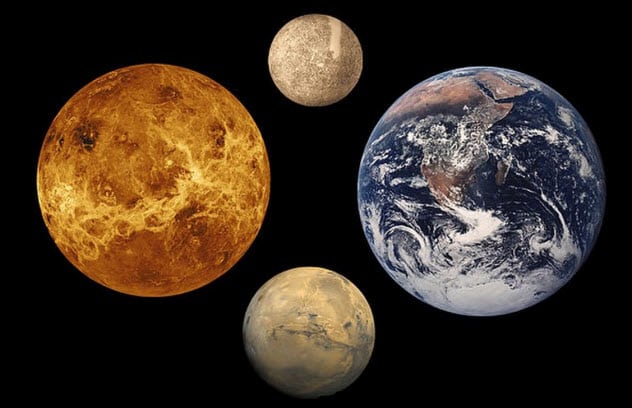 Gas giants are filled with poisonous gases. We cannot land on them because they lack a solid surface. Gas giants include Jupiter, Saturn, Uranus, and Neptune.

Of all the planets in our solar system, only Earth supports life as far as we know. Mars comes in a close second, while the rest just want to kill us.

Mercury has burning temperatures due to its proximity to the Sun. Despite this, Venus is hotter because its dense carbon monoxide atmosphere traps heat. Its atmosphere is also thick and will crush anything that dares to come in. Even meteors get crushed before they can touch the ground.

Although Mars could support life, it is not totally hospitable, either. We will need special equipment and facilities to survive. Scientists eyeing human colonization there have proposed the creation of an artificial magnetic field by placing a magnetic generator between Mars and the Sun. This will create a magnetic field to protect Mars from the solar wind, which depletes the atmosphere.

With the solar wind gone, the atmospheric pressure on Mars will increase. In turn, this will cause the temperature to increase and the ice in the polar regions to melt. CO2 will be released, kick-starting a greenhouse effect that will cause water to flow.[7]

Although the plan sounds ambitious, we do not have the technology to even create the magnetic field. 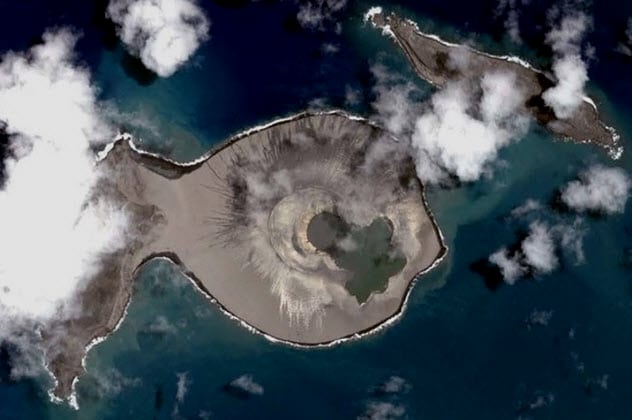 While rare, it is not uncommon for new islands to suddenly rise from the ocean. In 150 years, we have watched three such islands form after underwater volcanic eruptions. The latest and the most interesting is Hunga Tonga-Hunga Ha’apai, which suddenly formed off the coast of Tonga in the South Pacific Ocean.

The island caught the attention of NASA, which observed its development. NASA expected it to submerge soon after it was formed, but it did not. Now NASA believes that the island will last for several years before finally submerging.

NASA is interested in the island because it gives insight into how surface water could have altered the landforms of Mars. For instance, the island was initially unstable and kept on losing parts to the ocean. It only became stable when its foundation solidified as salt water reacted with volcanic dust.

Scientists say that this was how the landforms on Mars were created. They started off watery and unstable but slowly solidified.[8] 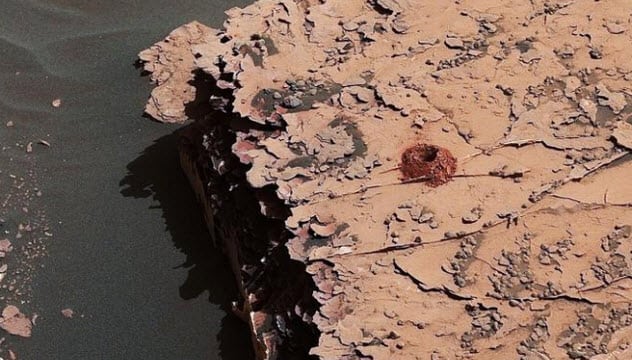 Although we have not found life on Mars, scientists suspect that the Red Planet supports or used to support life. Curiosity, one of the rovers presently exploring the surface of Mars, revealed the existence of organic molecules in some rocks in Gale Crater, which was a lake 3.5 billion years ago.

Every living thing contains four organic molecules: proteins, nucleic acids, fats, and carbohydrates. Without them, an organism cannot exist (as we know it). Although the existence of these molecules could point to life on Mars, we know that some nonliving things can produce these molecules, rendering the discovery inconclusive.

However, scientists have found something else that could prove the existence of life on Mars. Methane.

Living things produce methane. In fact, most of the methane on Earth is produced by living things. And Mars’s atmosphere contains methane, which only lasts for a few hundred years before it needs to be replaced. This means that something is releasing methane into Mars’s atmosphere.

Scientists theorize that the methane is released by chemical reactions or microbes. They have also observed some plumes releasing methane. Curiously enough, scientists have noticed that Mars’s methane production increases in the summer and decreases in the winter. This has not been observed among living things on Earth.[9]

1 Plants Could Grow On Mars 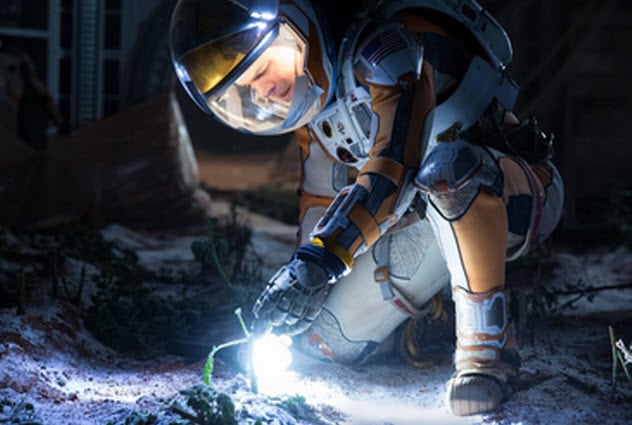 NASA believes that we can farm on Mars. In an experiment conducted in partnership with the International Potato Center in Peru, NASA was able to plant potatoes in a special box that replicated the harsh climate of Mars.

However, the experiment was inconclusive because researchers used soil from Pampas de la Joya desert in Peru. While the soil had been sterilized to kill all forms of life, it may have contained some microbes that aided the growth of the plants.

The potato was also grown from potato cuts instead of seeds. This will be a problem because it is impossible to transport potato cuts to Mars without damaging the cells, which will make planting impossible.

In a similar experiment at Villanova University, some students grew lettuce, kale, garlic, and hops—but not potatoes. The tubers died because the soil was too thick. Similar to NASA’s experiment, the students used soil from volcanic basalts in place of the iron-rich Martian soil (regolith). While the basalt was processed to mimic regolith, it did not replicate the real thing.

Regolith is unsafe for planting because it contains perchlorate, which could cause death in humans. There is good news, though. Perchlorate can be removed by rinsing regolith in water or exposing it to some bacteria that eat perchlorate. Using bacteria is the better option because it produces oxygen during the process.

The Sun is another factor that must be considered before we can plant on Mars. The Red Planet only receives half the amount of sunlight that reaches Earth. A good part of this sunlight is already blocked by the dust-filled Martian atmosphere. Even if scientists work around this, they will still need to deal with the dangerous ultraviolet radiation that hits Mars straight from the Sun.[10]

Read more cool facts about Mars on 10 Newly Uncovered Facts About Mars and 10 Obstacles Astronauts Must Overcome On A Voyage To Mars.