With only 12 percent of the world’s population living south of the Equator,[1] the jewels in the southern night sky can stay half-secret. Some stars, constellations, and even galaxies remain hidden from the sight of stargazers in the Northern Hemisphere, and their stories are unknown.

Even better, many of these southern sights can be viewed without a telescope. All you need is a clear night away from a city. Think deserts in Africa and Australia. Think high mountaintops in New Zealand. Think isolated islands . . . well, pretty much all over. There is a lot of space in the Southern Hemisphere. 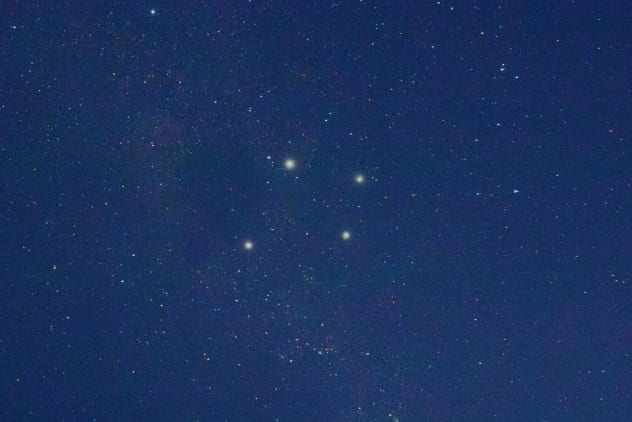 The Southern Cross, officially known as Crux, is the smallest of the 88 recognized constellations and still one of the best-known. It appears on the flags of Australia, New Zealand, Brazil, Papua New Guinea, and Samoa.[2] The constellation has a distinct cross shape formed by four stars, although depictions frequently include a (smaller) fifth bright star, Epsilon Crucis.

Crux was named by Western explorers, who, being Christian, likened the shape to the crucifix and designated it as a southern feature. However, many cultures already present in the Southern Hemisphere perceived it differently. For example, in New Zealand’s Maori culture, interpretations include an anchor or the stopper of the hole from which storm winds blew. 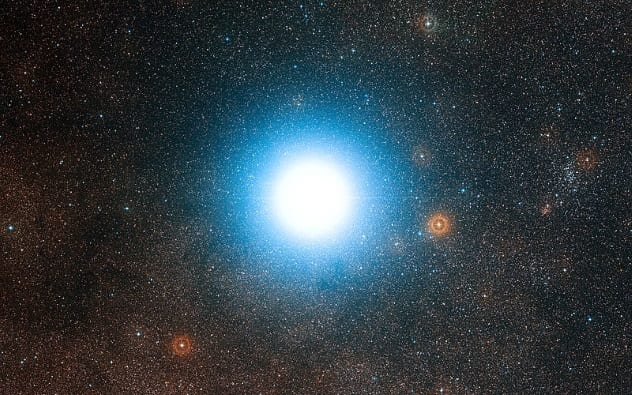 Though we see what appears to be one star, Alpha Centauri is a star system made up of three stars: two locked in a binary orbit and a third star orbiting around that, named Proxima Centauri.[3] These stars are considerably smaller than the ones we see surrounding them. However, they appear a similar size, as they are so much closer. As its name suggests, Proxima Centauri is the nearest star in the sky after our own Sun.

Proxima Centauri is still a considerable distance away at 4.22 light-years. That starlight we can see is still over four years old, and we are nowhere close to getting friendly with this neighbor. The furthest reach of any mission so far is that of Voyager 1. In 41 years, not only is it nowhere close to a light-year away, but it’s not even a light-day away. Currently, NASA has it tracked at just under 20 light-hours from the Earth. When it comes to space, proximity is relative. 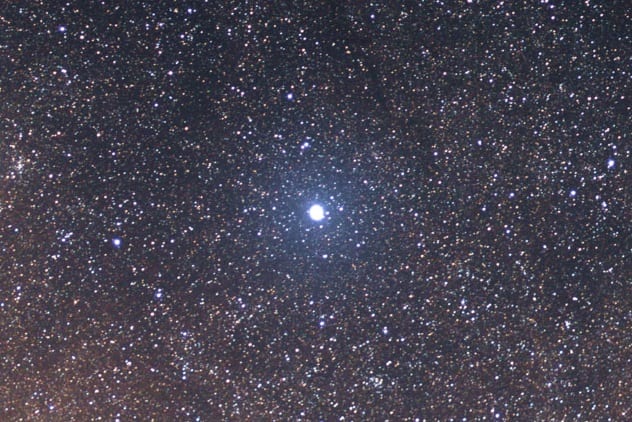 Though quite literally outshone by its neighbor, the bright star sitting just by Alpha Centauri is worth considering, too. First of all, it is not actually a neighbor. Alpha Centauri is far closer to us here on Earth than it is to Beta Centauri, which is 348.83 light-years from us.[4] Beta Centauri is simply much bigger and brighter. So although it sits much farther back in the sky, it appears only a little dimmer. When looking out at the stars, it is easy to forget they exist in this 3-D space above us, not tacked onto a 2-D sheet.

Jointly, Alpha and Beta Centauri create the “pointer stars,” as they can lead, or “point,” you to the Southern Cross. Make a line from Alpha to Beta, and you will guide your eyes straight to it. Although this cross is pretty obvious once you have located it, things can get confusing when you stare up into a vast field of dots—there are many crosses. One such asterism has even gained the name “False Cross” for catching so many stargazers out, partly due to creating a larger cross than the true one. 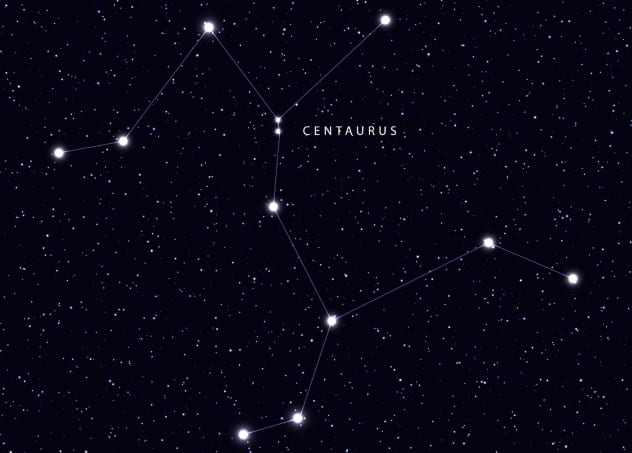 The constellation Sagittarius depicts a skilled archer who also happens to be a centaur—half-human and half-horse. However, he is not the only one. Alpha Centauri is the brightest star and the left foot in Centaurus. The specific mythological centaur this constellation is meant to represent is unknown, but many suggest Chiron (the guy who trained Hercules).[5]

This constellation is now quite hard to spot from the Northern Hemisphere, and in most places, you cannot see it at all. But to the Ancient Greeks naming it, Centaurus would have been far more prominent, until the Earth’s movement placed it farther below the horizon. The Earth’s axis wobbles, causing a slow shift in the visibility of the constellations from different points on the planet over time. This is known as the precession of the equinoxes. The change is minuscule enough that it will take over a millennium to notice a difference. But that was more than enough for the night sky to appear different to the Babylonians than it did to the ancient Greeks and different again for us. Everything we can see prominently in the Southern Hemisphere is close to the Southern Celestial Pole, the imaginary point you would reach in the sky were you to draw a straight line up from the South Pole. The entire night sky appears to move around that point with the spin of the Earth.

The easiest way is to begin by going back to the Southern Cross. Draw an imaginary line from the head to the foot of the cross and extend it outward into the night sky. Then create another line from the center of the two pointer stars and extend it to meet the first. Where your two imaginary lines meet is approximately the Southern Celestial Pole.[6] From this, navigators can determine the four compass points using the stars.

5 The Emu In The Sky 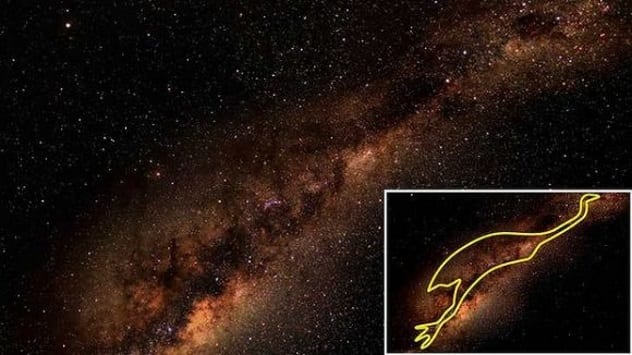 Just next to the Southern Cross, a clear night can reveal the Emu in the Sky, one of the few night sky features made up of darker patches of sky rather than the stars themselves.[7] These patches are created by the dust of the Coalsack Nebula obscuring the light of stars that exist behind them. These dust lanes stretch into a long, thin shape that resembles an emu, starting with the shape of the head right at the Southern Cross and stretching out into the entire body.

Some Australian Aboriginal Dreamtime stories consider emus to be creator spirits that would fly over the land, and this same creature was represented in the night sky above. The Incas also used the Coalsack Nebula to create many sky features. They saw a river full of animals in their sky, including a partridge and a llama. 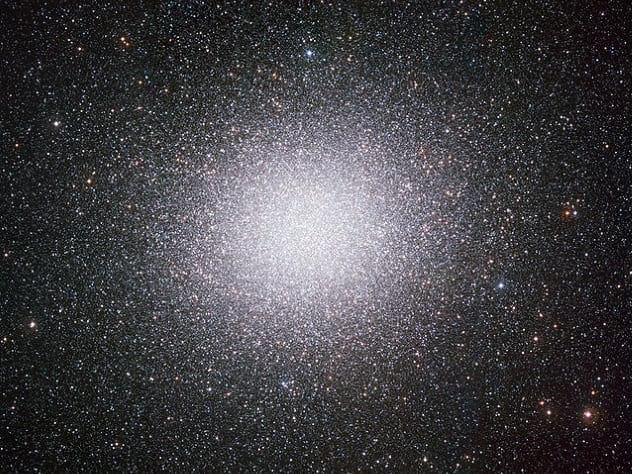 Within Centaurus shines a globular cluster that you can see with the naked eye. While this is rare in itself, Omega Centauri is also the biggest globular cluster in the Milky Way and contains some of the oldest stars you can see in the night sky, at an estimated 12 billion years old. The size of the cluster allows us to see it despite being 17,000 light-years away.[8]

A globular cluster is an immensely dense ball of stars clumped together. They are held together through the forces of their stars’ own gravity. The Milky Way’s globular clusters are thought to have formed before our galaxy flattened out into a spiral disc.

However, Omega Centauri may have a different origin. It may be the remnant of an ancient dwarf galaxy. The theory is that this galaxy once collided with our own, causing the outer arms to be ripped from it and leaving the core behind. At the center of every galaxy is a black hole, and, if the theory is correct, this black hole is still present, with its gravity keeping this ancient cluster intact. 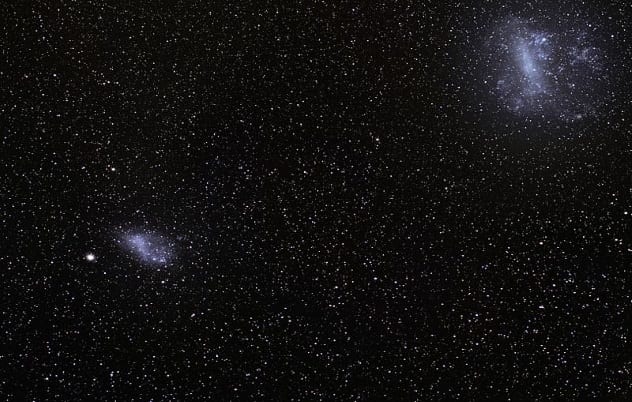 Though these seem to be clouds, they do not move and are never affected by the wind. They are actually two other galaxies in the night sky. They are referred to as the Magellanic Clouds, with their “discovery” accredited to Magellan many centuries after other cultures had incorporated them into their star maps and stories.[9]

The Large and Small Magellanic Clouds are relatively small dwarf galaxies and are much smaller than our looming neighbor Andromeda. The larger has around 30 billion stars and the smaller three billion. Those numbers seem pretty tiny when you consider that we have at least 200 billion in the Milky Way. The two galaxies are in orbit around ours. 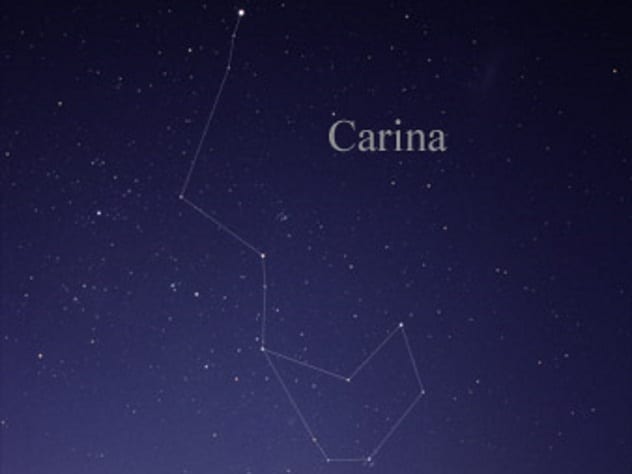 You may have noticed that there haven’t been many constellations mentioned in this article. That is because only those constellations right up next to the Southern Celestial Point will get absolutely no decent viewing time north of the Equator. After Crux and Centaurus, the only other constellation that stays mainly down south is Carina. Carina is the Latin name for the keel of a ship. In fact, it was once part of a whole ship under a different and more ancient classification of stars. That ship, called Argo Navis, was eventually broken into three in the modern constellations, with the stern and the sails becoming Puppis and Vela.[10]

Within this constellation, there is a nebula visible to the naked eye. The Carina nebula is four times larger than the well-known Orion Nebula and shines brightly despite being much farther away. It is likely only less famous because it is so far south. 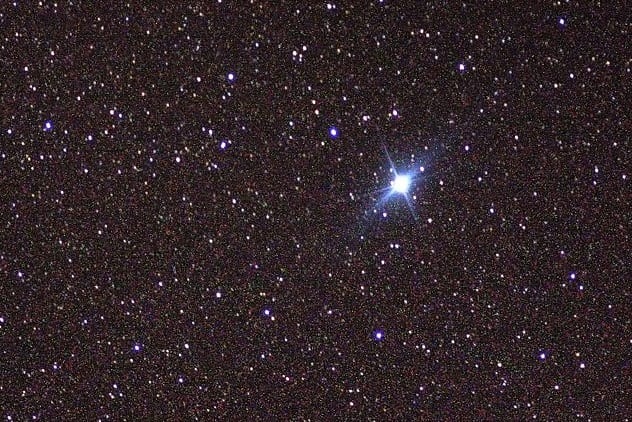 Canopus is the brightest star within the constellation Carina. More than that, it takes the silver medal as the second-brightest star in the entire night sky, losing only to Sirius.[11] Canopus was well-known to Polynesian navigators, who possessed an extensive knowledge of stars and were able to navigate with exceptional accuracy using this knowledge paired with a keen understanding of other environmental factors, such as winds. Canopus, being so visible, was an important navigational marker.

In later years, Canopus was once again important for navigation, this time for spacecraft. Canopus is so bright that NASA sometimes uses it as a reference point for the sensors on their craft to calculate their position. However, because it is so far south, it has not been studied a great detail.

Reggie Neeson is wandering around the planet, learning what they can and writing down what they learn.

Check out some more amazing cosmic sights on 10 Astounding Examples of Pareidolia In Outer Space and 10 More Amazing Images Of Space Pareidolia.