Fantasy movies often conjure the most fantastic make-belief creatures. But one need not look to fiction to find creatures so surreal that they beggar belief. Earth’s natural world has a sense of humor—there are giant versions of normal species and spiders that look like rabbits.

In the darker corners, fish suddenly melt and large creepy crustaceans burrow into corpses. That aside, rainbow squirrels and ghostly tubes longer than a bus also prove that the world’s most surreal animals are also among the most glorious.

When Herman Melville wrote Moby Dick in 1851, the story about the white whale became a classic. The pale cetaceans are not pure invention. For instance, Galon de Leche (“Milk Gallon”), an albino whale, is a local celebrity off the coast of Mexico.

There have been several sightings of a white whale in the area, but nobody knows if it is the same animal or different individuals. However, they are rare. In 2003, a pure-white calf was allegedly seen. Unfortunately, there exists no photographic evidence to back up the encounter.

Milk Gallon first received its name when researchers found the albino gray whale in 2008 and again in 2016, this time with a normal-colored calf by its side. The most recent sighting happened in 2019 when a whale-watching guide saw a white gray whale breach near the Baja California coast, Mexico.[1]

Manuel Gonzalez was savvy enough to record footage of the animal. He did not repeat the mistake of the crew who possibly sighted Milk Gallon as a calf in 2003. 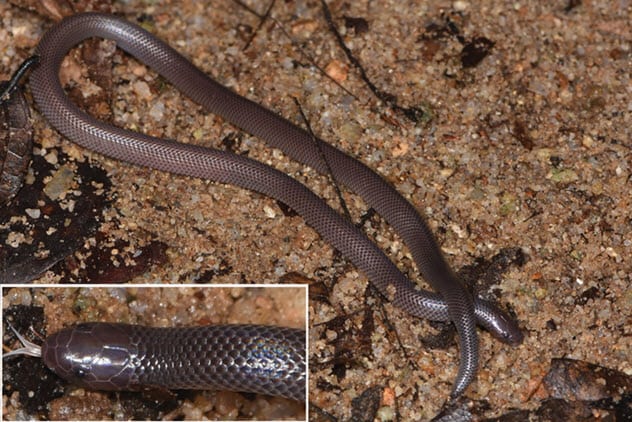 In 2019, researchers looked under rocks and plants in the forests of Guinea and Liberia. They were rewarded with a new species of snake. They found three of the unassuming brown creatures, which proved to be hairy foes.

The new guy turned out to be a member of a group known as stiletto snakes. Forget about picking them up the usual way. Grasping behind the head with one’s fingers could end with a snakebite. Stilettos have a unique ability: They can deliver a poisonous stab without opening their maws.

Special fangs grow from their mouth corners, allowing the snake to stab sideways. As the Guinea-Liberia scientists found out for themselves, the reptiles also lunge distances equal to their own body length.[2]

Luckily, stilettos are not fatal. The bad news is that their venom is cytotoxic (a substance that destroys cells). The snakes pack a potent amount, and without the correct antivenom, a bitten hand risks losing a few fingers. 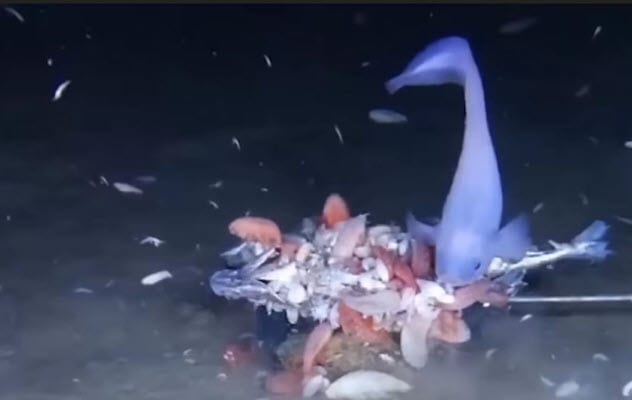 In 2018, a scientific expedition plunged 7.5 kilometers (4.7 mi) into the Atacama Trench. Located off the coast of Peru, it is one of the deepest places in the sea. Footage captured three new species of snailfish.

Despite the depth, there were plenty of invertebrates and the snailfish appeared to be the top, well-fed predator of the bunch. This was quite remarkable considering that the pressure down there would destroy a human. That is also what happened in reverse when scientists tried to bring the fish to the surface.

As it turned out, what people perceive as normal surface pressure was deadly to the creatures. To survive the depths, the snailfish evolved a squishy body with almost no structural pieces. The most substantial parts were their teeth and inner ear bones.

This soft fragility made the snailfish remarkably tough but only at a depth where they were kept together by the high pressures. When a few were caught and brought to the surface, they disintegrated so rapidly that it looked like they melted.[3] 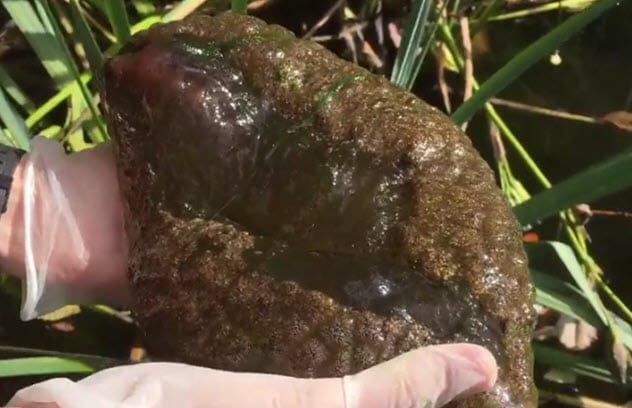 In 2017, something weird surfaced in British Columbia. It resembled a brain crossed with a bowl of jelly. Scientists removed it from a lagoon in Vancouver, but this was no wayward movie monster. The gelatinous goop was a group of microscopic creatures called zooids.

In scientific jargon, the brain-like colony is a bryozoan and the lagoon case was identified as Pectinatella magnifica. This type has never been seen in the area before. All known samples came from east of the Mississippi River.[4]

This added fuel to the debate trying to settle whether the creatures are an invasive species. Their muddy color often makes the colony look like river rocks or turns them invisible in dark water. Indeed, the Vancouver bryozoan was only spotted because water levels dropped enough to make it visible.

They could have been overlooked all these years or recently invaded beyond their borders due to climate change, as some suggest. Either way, the wobbly balls are ancient survivors. The fossil record shows that zooid colonies go back 470 million years. 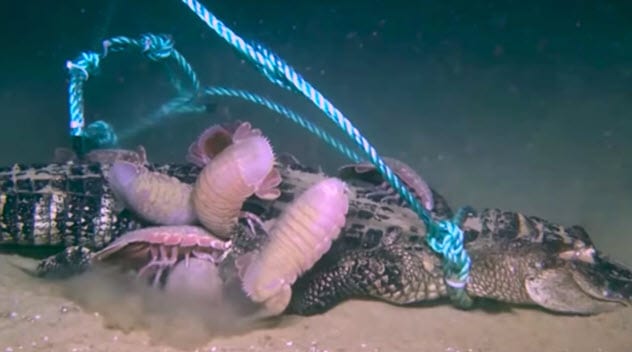 Isopods belong to the crustacean clan, just like crabs and lobsters. In 2019, scientists caught the creatures on camera during an experiment. The team wanted to find out what scavengers trotted closer when a big piece of meat fell to the bottom of the sea. In this case, the piece was an entire alligator.

Once it hit the seafloor in the Gulf of Mexico, it did not take long for the isopods to emerge. Each was roughly the size of a football. They were a sickly pale color and resembled lobsters. The weird look was outclassed by their gory behavior. Within 24 hours, several had burrowed halfway into the alligator’s stomach to eat the reptile from the inside out.[5]

The crustaceans’ slick ability to get through the alligator’s thick skin surprised the researchers. Then again, isopods are known for their strangeness. The nightmarish creatures can go for years without food.

Perhaps with that in mind, isopods gorge themselves whenever the opportunity presents. Case in point: When one tried swimming away from the alligator, it dropped to the seafloor like an anvil, too stuffed to move properly. 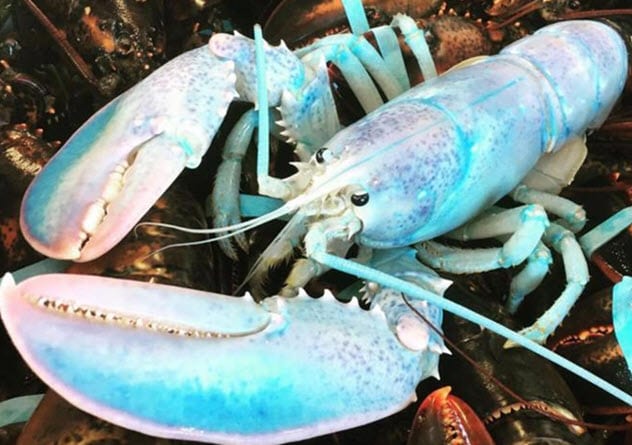 In all his years as a lobsterman, Robin Russell had never seen anything like it. When he checked his traps in 2017, there was a blue lobster between the usual brown ones. The creature also had areas with faded pink and periwinkle, giving it a mild rainbow look.

Called “Lucky,” the crustacean avoided the dinner plate and found a home at a science center. Lucky might be an eye-popping sight, but blue lobsters turn up every few years. In fact, lobster coloration is rather mercurial. A pigment called astaxanthin changes color depending on its amount, outside influences, or how astaxanthin contorts.

Usually, lobsters are brown. They only develop the bright red that fine diners know so well when boiling water messes with the pigment. Lucky and his blue brethren remain mysterious. Researchers think the reasons might include low levels of astaxanthin.[6]

When completely removed from their diet, lobsters turn white. A genetic mutation might also be responsible. In the past, mutations produced some funky lobsters—brilliant yellows, a calico with dots, and lobsters with a two-toned split look. 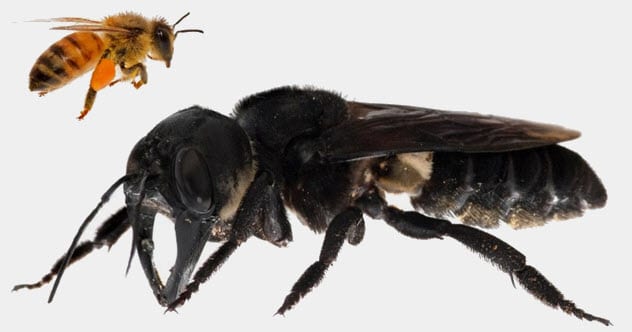 Alfred Russel Wallace found a giant bee. The serious-looking black creature was four times the size of a honeybee. This was in 1858, and for over a century, the so-called Wallace’s giant bee vanished.

Thought to be extinct, it made a comeback in 1981 when an entomologist found six nests scattered throughout the Bacan Islands. After this sighting, the enormous buzzers disappeared again.

In 2019, a team of scientists scoured Indonesian islands in search of the world’s largest bee. The expedition reached its final day when a local guide spotted the nest. It was already known that Wallace bees nested inside termite mounds, but none inspected by the team had yielded any of the creatures.

This mound was in a forest in North Maluku and contained a queen Wallace. The photos and video of her were the first taken of the species. Her wingspan measured 6 centimeters (2.5 in) long, and the creature had massive mandibles.[7]

The bees may keep disappearing because the region is exceptionally remote. 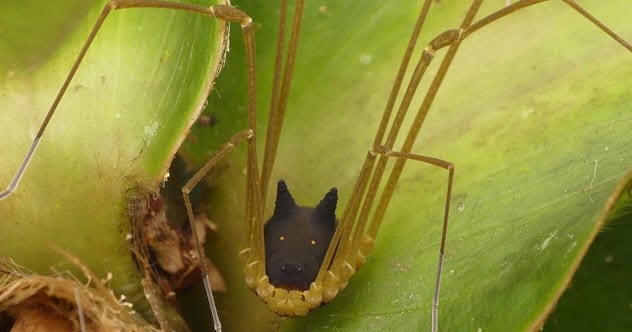 Scientist Andreas Kay browsed Ecuador’s Amazon rain forest in 2017. He encountered a tiny creature with a really odd look. The photographs showed something resembling a spider with a black bunny’s head. As bizarre and new as it looked, the species had been discovered in 1959.

About the size of a thumbnail, it was also not a spider but a harvestman. This type of arachnid is more popularly known as a “daddy longlegs.” Unfortunately, researchers don’t have much information about this particular species which is known as the bunny harvestman.

Little research has been done on the creature’s unique body shape, despite being known for decades. However, the rabbit look probably has an important purpose. The two false ears and false yellow eyes could be a way to deter predators.[8]

Whatever the reason, harvestmen are exceptionally successful as a group. There are thousands of species, and they are older than the dinosaurs. 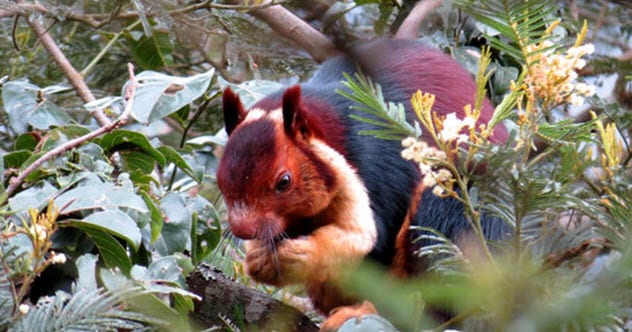 In 2019, an amateur photographer uploaded images of a squirrel to Instagram. They were a smash hit. This was no ordinary squirrel. The animal appeared to have been dyed in sections or perhaps digitally altered.

The good news is that the rainbow-colored rodent is 100 percent organic. Called Malabar giant squirrels, they hug trees in the Indian peninsula. This particular specimen was a beautiful example of their bright fur that could include orange, purple, and indigo.

Sadly, not every Malabar has a technicolor dreamcoat. It is more common to see animals with different shades of brown like beige, rust, and tan. Either way, both could play a role in camouflage and looking good for the opposite gender.

The creatures are also impressively large. Measuring about 1 meter (3 ft) long, they rarely leave the safety of high branches. When they feel like traveling to the next tree, they launch their bright bulk up to 6 meters (20 ft) through the air.[9] 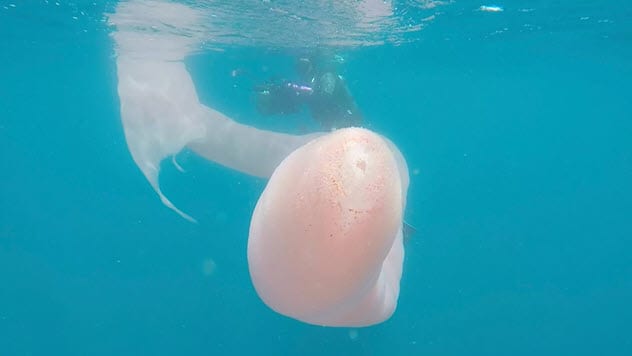 In 2018, divers filmed underwater scenes near White Island in New Zealand. Suddenly, they were surprised by a ghostly creature. The ribbonlike tube measured 8 meters (26 ft) long. It looked like a giant worm.

However, the floating feature was a colony of creatures called tunicates. These plankton-nibbling critters look like tiny rods but are complex organisms with spinal cords. Their ability to clone means that the “ribbon” can live forever.

A single colony is also known as a pyrosome and can grow as long as 18 meters (60 ft). This made the New Zealand case one of the smaller tunicate villages. The largest “cities” are often built by a species called Pyrosoma spinosum. Not only do they make the most breathtakingly long pyrosomes, but the bioluminescent variety of tunicates also turn the colony into a glowing wonderland.[10]

Read about more surreal creatures on Top 10 Fantastic and Surreal Creatures and 10 Surreal And Twisted Fish.