If it’s Sunday, that means that it is time once again to look at some of the more heartwarming stories of the last week. Click here to check out the strange and unique events of Saturday’s offbeat list.

This week, we learn about several elderly people who show that it is never too late to fulfill your ambitions, whether these involve higher education or swimming with sharks. Two little girls get emotional hospital send-offs when it’s time to go home, Scotland’s unluckiest dog finally finds a home, and the Tower of London welcomes its first newborn ravens in three decades.

10 The Ravens In The Tower 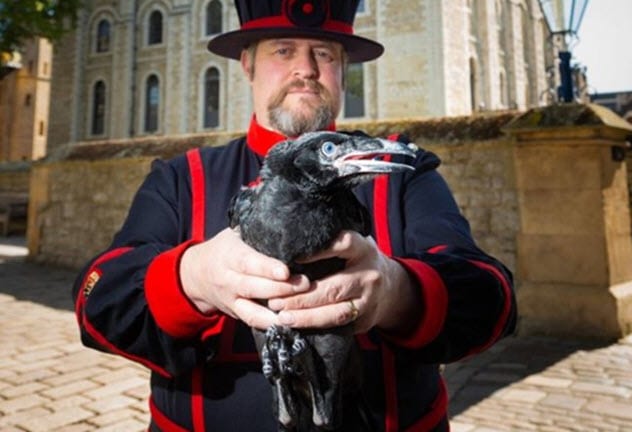 For the first time in 30 years, raven chicks have been born at the Tower of London, thus ensuring the survival of the kingdom.

According to legend, the ravens of the Tower of London are protectors of the Crown. Should they fly away or become lost, then Britain would fall. Historians disagree over the origins of this tale, although many point the finger at King Charles II. Even though wild ravens undoubtedly visited the tower before him, he had their wings clipped and kept them inside the building during the mid-17th century.

In modern times, the ravens are a popular attraction at the Tower of London. There is even an official Ravenmaster who cares for the birds, and Christopher Skaife has held that position since 2011. He recently announced that the tower has welcomed its first chicks in three decades.

Most of the ravens are brought in from other places. The last bird to hatch and live at the Tower of London was Ronald Raven in 1989. But four new chicks belonging to Huginn and Muninn started hatching last month on St. George’s Day.[1]

They have put on plenty of weight and appear to be healthy. Three will be sent to live someplace else, while one will remain at the tower and be named George or Georgina.

Staff at Seattle Children’s Hospital decided to throw one of their young patients a goodbye party fit for a princess.

Emma Krall was born with skeletal dysplasia and scoliosis. Due to these conditions, she has spent over nine months of her 22-month life in the hospital. Recently, she was there for six weeks for major spine surgery. During recovery, she had to wear a medical brace with a collar around her head to keep her spine straight.

Ever the optimist, Emma began referring to the device as her crown. This inspired the hospital staff to give her a princess-themed party when it was finally time for the toddler to go home. Emma donned a tiara and waved her magic wand around as other people dressed up, sang songs, and played games with her.[2] 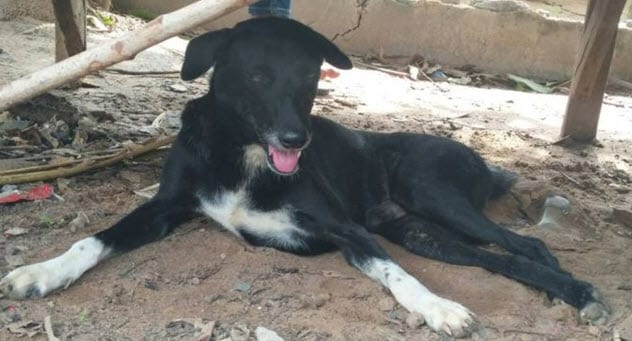 A three-legged dog is the hero of the hour in a village in Thailand after rescuing a baby that had been buried alive.

Ping Pong had lost the use of one of his legs in a car accident, but that has not stopped him from helping out around the community whenever possible. One day, he was out for a walk in a field with his owner, Usa Nisaikha. Ping Pong rushed to an area where he started barking and digging the ground. When Nisaikha caught up to him, he saw a tiny leg sticking out of the earth.[3]

The two unearthed a newborn baby. Fortunately, Ping Pong found him in time. The infant was sent to the hospital where doctors declared him healthy.

The baby belonged to an unwed teenage mother who hid her pregnancy from her parents. She was taken into custody while her parents announced that they will raise the child.

7 One Good Turn Deserves Another 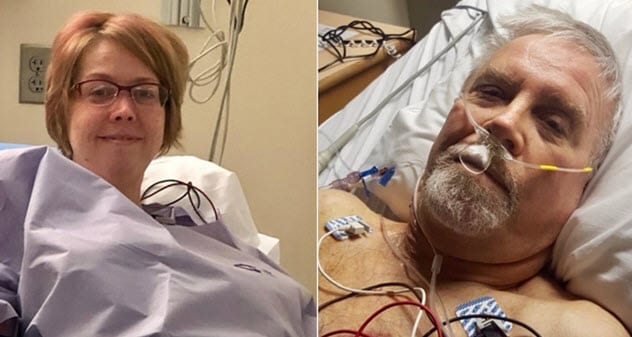 A woman from Minnesota donated a kidney to the man who helped save her daughter’s life.

Back in August 2016, Becca Bundy’s daughter suffered a seizure at home. Volunteer firefighter Bill Cox was the first responder on the scene and was able to stabilize her until the ambulance arrived.

Fast forward a couple of years, and the two met again by chance when Becca went to a bar where Bill worked as a bartender. Cox was wearing a bright green T-shirt that said that he was in end-stage kidney failure and in need of an organ transplant. The two got to talking and soon realized that they were the same blood type. Eager to repay her daughter’s savior, Bundy offered to donate one of her kidneys.

Becca still had to be tested to make sure that she was a good match for Bill. The man had said that four or five other people had offered him a kidney after seeing his T-shirt, but none of them had been compatible. However, Becca was.[4]

The operation took place in late February at the University of Minnesota Medical Center. Since then, Bill has recovered well and is able to volunteer as a firefighter and first responder again. 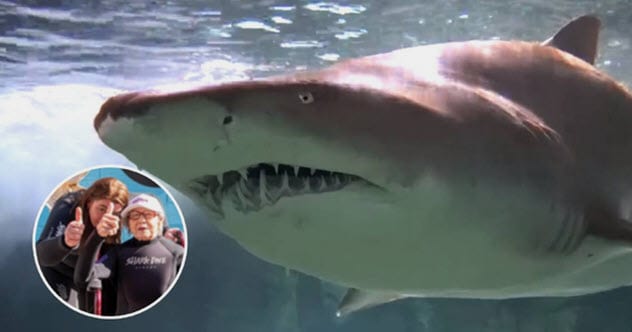 An adventurous woman from Australia crossed off a significant entry on her bucket list and celebrated her 104th birthday by swimming with sharks.

Dorothy Yoemans might be a centenarian residing in an aged care home, but that has not dulled her lust for life. Last year, she celebrated her birthday with a helicopter ride. When asked what she would like to do to mark her next anniversary, Dorothy quickly replied that she wants to go swimming with sharks. When asked why, she simply replied, “Why not?”

Fortunately for her, Uniting Springwood, the care home where she lives, organizes “positive life experiences” for its residents. One of the staff members got to work coordinating a shark dive in conjunction with the Sea Life Sydney Aquarium.[5]

Dorothy went inside a tank with 30 sharks (most of them Port Jackson sharks), three rays, and plenty of tropical fish. She described the whole experience as “fabulous” and is probably already thinking of ways to top it next year. 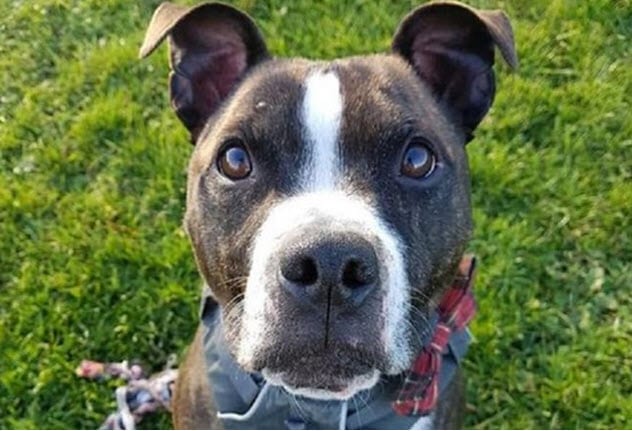 A pooch once proclaimed the “unluckiest dog in Scotland” has finally found a home after over five years in an animal shelter.

Star is a seven-and-a-half-year-old Staffordshire Bull Terrier. He was found by police almost six years ago in an abandoned building. He had been badly neglected by his previous owner, who also tied Star up so the dog couldn’t leave. Star was taken to the Edinburgh Dog and Cat Home where he would spend the next five years of his life.

Eventually, staff at the animal shelter decided that enough was enough and that it was time to find a home for Star. A social media campaign garnered thousands of views and attracted the attention of multiple prospective adopters. Among them was Graeme Webb, a professional photographer from Hawick.

It only took one short meeting for Webb to decide that Star was the pooch for him. He was won over by how happy and friendly the dog was despite all the hardships he had endured. After several visits, the staff concluded that the two were a perfect match and began the rehoming process. It took Star just one day to settle into his new home and claim the sofa as his own.[6] 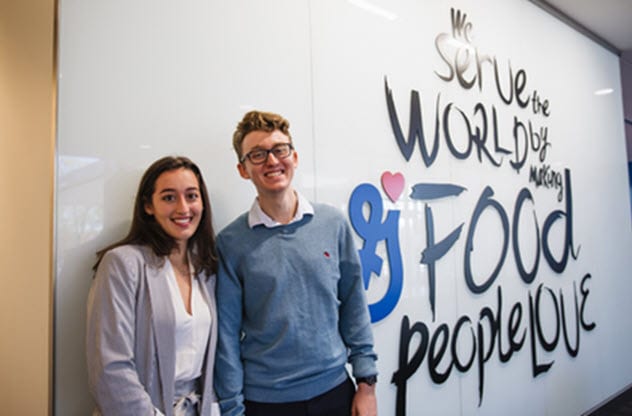 A brother and sister from Miami were this year’s winners of the Feeding Better Futures Scholars Program sponsored by General Mills. Their project collected over 6,800 kilograms (15,000 lb) of food waste destined for the landfill and turned it into 1,800 kilograms (4,000 lb) of compost.

Ugo and Emma Angeletti are two teenagers who started the back2earth program. They installed drop-off points and composting stations for food waste which encouraged many people and businesses in their community to recycle food that would have otherwise ended up in the dump. In turn, this led to thousands of kilos of compost which were used to nourish hyperlocal gardens.[7]

General Mills recognized the simplicity and efficiency of the program and awarded it the top prize of its second annual Feeding Better Futures Scholars Program. The goal of the initiative is to reward the efforts of young people that benefit global food issues such as reducing food waste and fighting hunger.

The award comes with a $50,000 cash prize which the siblings plan to use to install more drop-off stations, plant more gardens, and distribute compost kits for people to use at home. 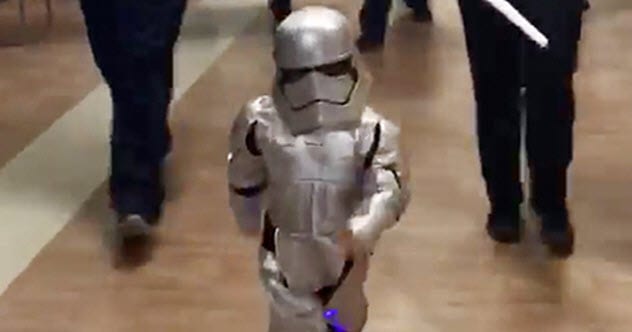 One little girl from England celebrated the end of her cancer radiation treatment in style by donning a stormtrooper costume and marching down the corridors of Nottingham Radiotherapy Center to ring the hospital’s “ceremonial bell.”

Four-year-old Audrina Hatton-Wright has a rare form of cancer called neuroblastoma. Since she was diagnosed, she has endured four operations, four chemotherapy sessions, and, most recently, 14 rounds of radiation.

After her final round, Audrina was invited to take part in a hospital tradition which involved ringing a bell in the lobby to signify the end of her treatment. The little girl had a special idea to mark the occasion. She dressed up as a silver stormtrooper.

She made her way through the hospital flanked by staff members wearing masks and wielding lightsabers while the “Imperial March” played in the background.[8] 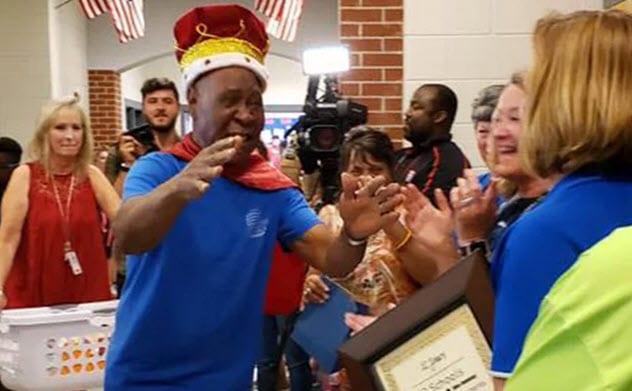 An 83-year-old school janitor nicknamed “Mr. John” was moved to tears when the whole school threw him a surprise party in honor of his retirement.

This Friday was John Lockett’s last day at Sand Hill Elementary in Carrollton, Georgia, after working there as a janitor for 10 years. Everybody at the school wanted to give him a memorable send-off, so they celebrated “Mr. John Day.” All the staff members and 685 students were on hand for the party where the beloved janitor was given a crown and cape so that he could feel like king for a day.[9]

School principal Carla Meigs called Lockett a humble and hardworking man who is “as good as they come.” The janitor was visibly emotional as he went around hugging those attending his retirement party.

His wife, Annie Lockett, helped plan the secret bash. The two look forward to spending more time with their grandchildren and great-grandchildren. 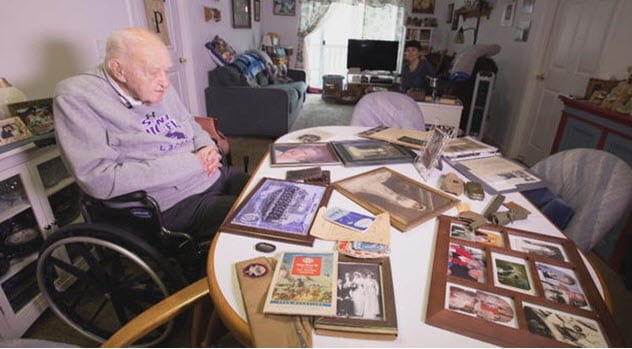 A World War II vet finally got his diploma from the college he attended almost 80 years ago.

Back in 1942, Lou Pioli was studying to become a dentist at Niagara University in upstate New York when the war came calling. He got drafted and went on to fly in military gliders over France. Pioli never resumed his studies once the war was over. Instead, he ended up working in insurance.

Fast forward a few decades, and the 99-year-old Pioli was recording his life stories for his family in anticipation of his 100th birthday. He was fairly happy with his accomplishments but felt that there was one thing missing: a college degree.

Lou’s daughter wrote to the university to see if it was possible for her father to obtain an honorary degree. In honor of his service, Pioli received an associate degree during a special ceremony in Vermont. He wore his “purple freshman tie and beanie” that he still had from his first year of study back in 1942. Niagara University’s provost was present to hand the diploma to Pioli.[10]