Dinosaurs continue to fascinate us. Every now and then, we discover a fossil that reveals some new facts about their lives—for example, their diets, injuries, or habitats. However, some fossils also reveal evidence of diseases that affected dinosaurs. Yes, these animals had their own illnesses, too, just like every other living creature out there.

The diseases ravaged the dinosaur population and even killed a good number of them. Many of these illnesses are still around today, and some even affect humans, which sort of makes the whole thing more interesting. We also included some early reptiles that lived around the time of the dinosaurs. 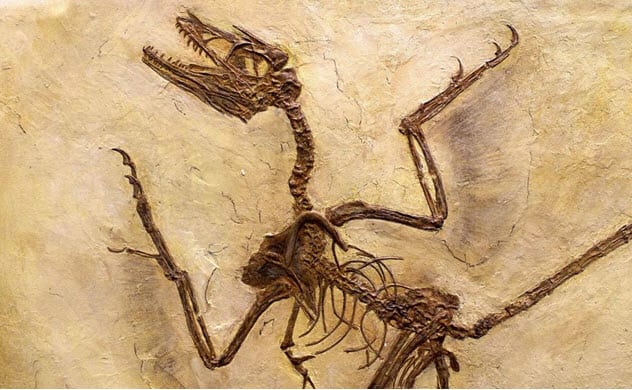 A 125-million-year-old dinosaur is the oldest creature known to have suffered from dandruff. That dinosaur is the microraptor, a small carnivore that was the size of a modern crow. Scientists have also found evidence of dandruff in two more dinosaurs, the beipiaosaurus and the sinornithosaurus. Both were about two times larger than the microraptor.

The researchers discovered evidence of dandruff by chance while studying how dinosaurs shed their feathers. They found that some parts of the feathers of the fossils contained corneocytes. This was a big deal because corneocytes are also formed when dandruff appears on human skin.

The researchers did not call it dandruff because corneocytes and dandruff were believed to only form on skin and not feathers. The researchers also found that dinosaurs shed their feathers in small bits—just like modern birds—and not in larger pieces as they would have expected for their size.[1] 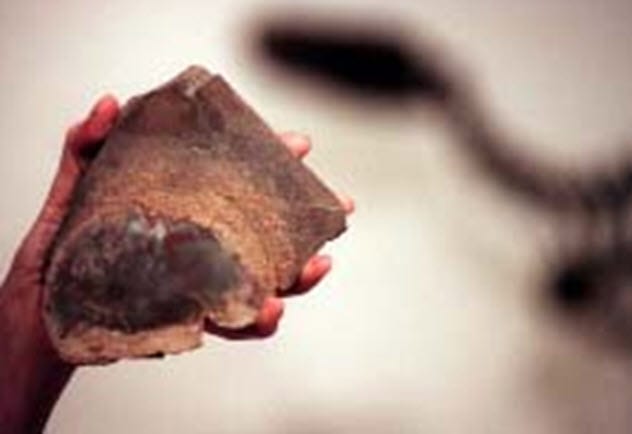 Dinosaurs had their fair share of cancer, too. This was revealed by a study led by Bruce Rothschild of Northeastern Ohio Universities College of Medicine in Rootstown, Ohio. Rothschild and his team made the discovery after scanning 10,000 dinosaur fossils stored in several museums across North America with an X-ray machine.

The researchers found that 29 of the 97 tested hadrosaur bones contained cancerous tumors. To be clear, not all tumors are cancerous. These were considered cancerous because they closely resembled tumors found in human cancer patients.

Researchers do not know why the hadrosaur often ended up with cancer. However, they think it was because of the conifers eaten by these animals. The conifer is a plant with needlelike leaves that is known to contain cancer-causing chemicals.[2] 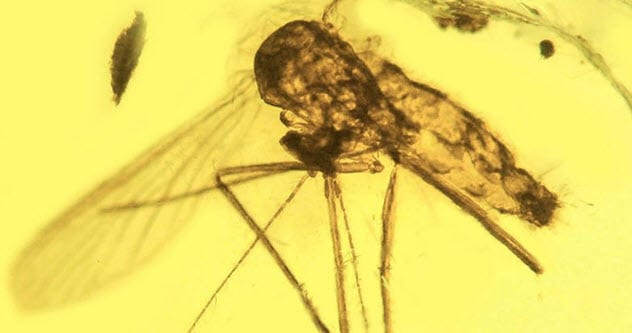 Malaria has been killing living organisms since the time of the dinosaurs. In fact, some researchers like George Poinar Jr., an entomologist (a scientist who studies insects) from Oregon State University, even think it killed dinosaurs.

These flying insects would have bitten the dinosaurs, which they probably considered a major source of blood, the way the female Anopheles mosquito considers humans its primary source of blood today. The flies infected the dinosaurs with an extinct version of malaria called Paleohaemoproteus burmacis. 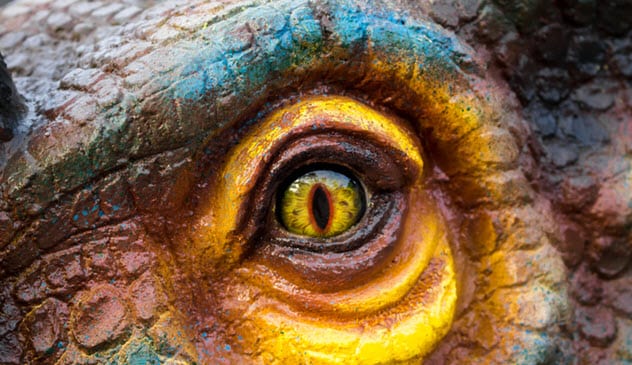 There is no hardcore evidence that dinosaurs had cataracts. However, the theory was suggested by L.R. Croft in his book, The Last Dinosaurs. In fact, he says the widespread formation of cataracts made dinosaurs go extinct.

Croft claimed that these creatures started suffering from cataracts when excessive heat and dangerous ultraviolet radiation from the Sun caused global warming. The dangerous radiation also caused dinosaurs to develop cataracts, which later led to blindness. So many dinosaurs went blind that they soon went extinct after becoming unable to fend for themselves.

Croft argued that mammals and reptiles did not go extinct because they cleverly avoided the Sun and switched to hunting in the dark. However, the dinosaurs continued roaming during the day.

However, a lot of people do not think that dinosaurs went extinct after developing cataracts. Natural selection would have made the dinosaurs develop some form of protection against the dangerous radiation. Besides, the whole theory seems weird.

But that is what you get when you ask an ophthalmologist like L.R. Croft why dinosaurs went extinct.[4] 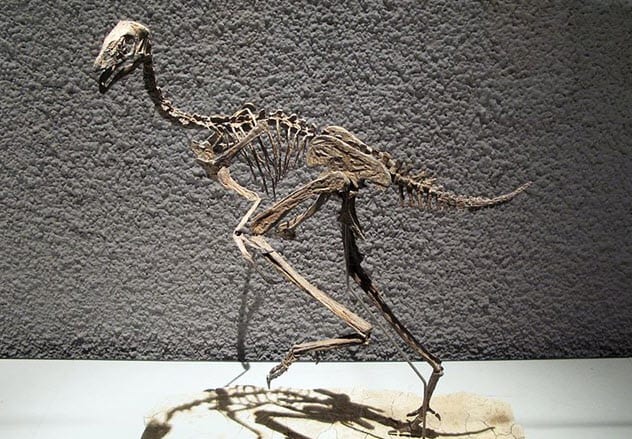 Osteoarthritis is the most common type of arthritis that affects humans today. It sets in when the slippery cartilage at the ends of bones wears out, causing the harsh bone joints to come into direct contact with each other. This causes friction between the ends of the bones, which soon wear out. Pain sets in at this point.

Researchers have discovered that the Caudipteryx, a small flying dinosaur that was just as big as the modern peacock, suffered from this condition, too. In fact, the dinosaur, which lived 130 million years ago, is the oldest creature known to have suffered from osteoarthritis.

Researchers made the discovery while studying the ankle bones of several birds and flying dinosaurs held in Chinese museums. They discovered that 3 of the 10 fossils of the Caudipteryx had the condition. However, researchers do not know why the dinosaur was susceptible to the condition. Interestingly, many small modern birds also suffer from osteoarthritis.[5] 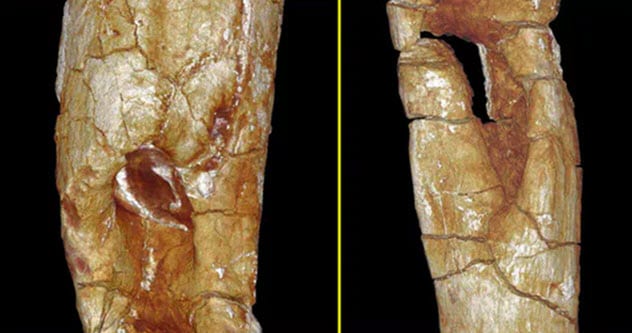 In 1997, researchers exhumed the remains of a Lufengosaurus huenei that lived 170–200 million years ago. They observed that the ribs of the dinosaur were somewhat abnormal. Several parts were missing, indicating that it had suffered some injuries before its death. However, the researchers did not really deliberate on the cause of the injuries and just kept it in storage.

Two decades later, researchers restudied the fossil and determined that the rib injuries were caused when the dinosaur was attacked by a larger predator that was trying to eat it. The team could not confirm the identity of the predator. However, it would have been huge considering that the Lufengosaurus huenei was also enormous. It reached 6 meters (20 ft) in length and weighed almost two tons.

The Lufengosaurus huenei got away from the predator but with a terrible rib injury that soon got infected with some deadly bacteria. The bacteria caused pus to form inside the rib bones, resulting in a deadly bone disease called osteomyelitis.

In humans, osteomyelitis is caused by Staphylococcus aureus. However, the researchers did not confirm whether the bacteria also caused the bone disease in dinosaurs. Nevertheless, the disease could have caused severe fever, fatigue, and nausea in the dinosaur, subsequently leading to its death. Some of the bacteria could have escaped into the brain, making the animal’s demise swifter.[6]

Curiously, the dinosaur could have still had the condition even if it was not bitten. The bacteria could enter its body some other way and travel into its rib bones through its blood. 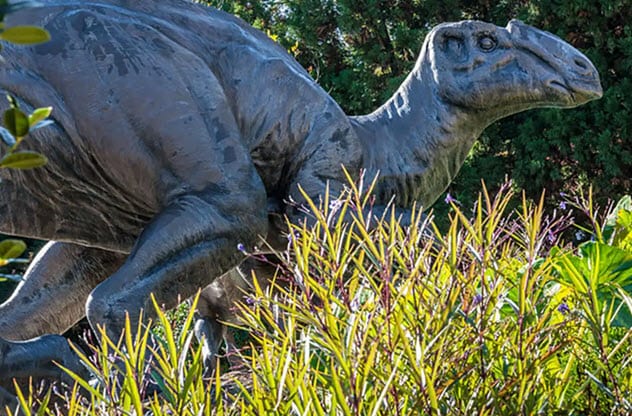 The hadrosaur, a herbivorous duck-billed dinosaur, seemed to be one unfortunate creature that suffered from a myriad of diseases. Besides cancer, it also suffered from septic arthritis, a severe condition that could have caused pain in its joints.

Unlike the osteoarthritis we mentioned earlier, septic arthritis is caused when germs travel through the blood to reach the joints. Septic arthritis can also be directly introduced into the joints during injury. In either case, it causes severe pain in the joints, sometimes immobilizing them.

Researchers discovered evidence of septic arthritis in dinosaurs while analyzing the elbow fossil of a hadrosaur. They found three unusual growths at the joints which were caused by septic arthritis. Scientists could not confirm how the hadrosaur ended up with the disease. However, they believe that it was so painful that the animal had difficulty walking.[7] 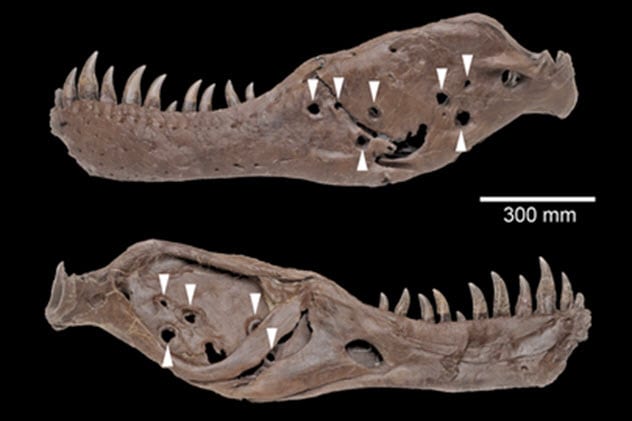 Dinosaurs suffered from several parasitic worms, including tapeworms and trematodes. Researchers do not know how long these tapeworms became, but they think they could have reached 30 meters (100 ft), which is actually small when talking about dinosaurs. Tapeworms reach over 24 meters (80 ft) in humans.

It is almost impossible to find evidence of parasitic worms in dinosaur bone and skin fossils because the worms probably died and decayed after the demise of the dinosaur. However, we can determine the kinds of worms that lived in dinosaurs by analyzing the coprolites (poop fossils) of the dinosaurs. Coprolites sometimes contain worm eggs or cyst samples.

This was how researchers George Poinar and Arthur Boucot discovered the first evidence of dinosaur worms in 2006. The poop belonged to an unidentified carnivorous dinosaur that lived somewhere in modern Belgium. The researchers found evidence of trematode and nematode worms along with a protozoa suspected to be Entamoeba.[8] 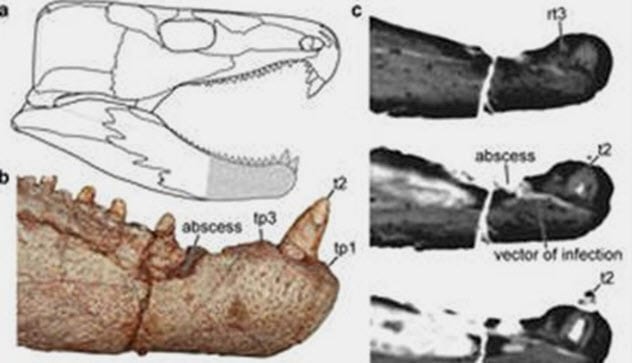 The Labidosaurus hamatus (aka the lipped lizard) is one extinct creature we have probably never heard of. It was a 1-meter-long (3 ft) reptile that lived around the time the dinosaurs roamed the Earth. However, it is popular for other reasons. It is the earliest creature known to have suffered from toothache and decay.

We discovered this a few years ago when Robert Reisz of the University of Toronto Mississauga led a team of researchers to scan the lower jaw of a fossilized Labidosaurus hamatus. They discovered that the creature had suffered from severe tooth decay that caused it to lose a good number of teeth.

Researchers do not know how the jaw got infected even though they think it had to do with the animal’s diet. The Labidosaurus hamatus was an omnivore. However, its main diet consisted of plants. Herbivores and omnivores with a predominantly vegetarian diet often have teeth specialized for chewing.

This was a major disadvantage for the Labidosaurus hamatus. Excessive chewing wore down its enamel, leaving the nerves inside the teeth exposed. The nerves got infected with bacteria, causing the damaged tooth to develop an abscess. This caused a painful toothache and, consequently, tooth decay.[9] 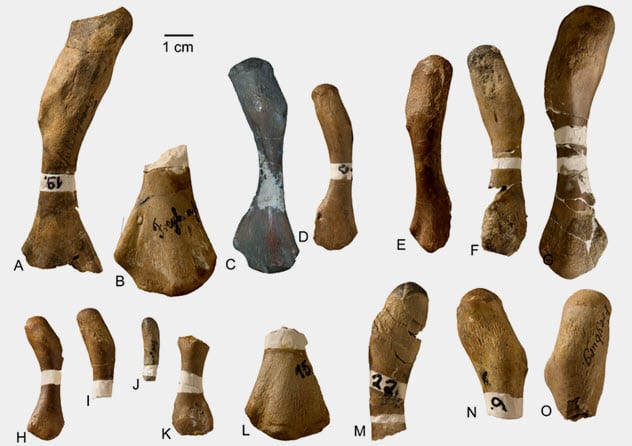 Pneumonia and tuberculosis predate even dinosaurs. The earliest evidence of the lung diseases was found in the Proneusticosasiacus, a marine reptile that lived over 245 million years ago.

Researchers made the discovery after performing an X-ray analysis of a Proneusticosasiacus fossil. They discovered that some of its ribs were abnormal. Injury, cancer, fungi, and scurvy were initially suspected until the team narrowed it down to pneumonia and Pott’s disease, a lethal form of tuberculosis that often affects the bones.

The researchers discovered that the reptile had suffered from the infection for months or even years until it died. However, other scientists say that the fossil really belonged to a Cymatosaurus, a marine reptile that is closely related to the Proneusticosasiacus.[10]

The Proneusticosasiacus and Cymatosaurus are closely related to another reptile called the nothosaur. This creature lived and bred on land but hunted in water, just like the seals of today. Interestingly, modern seals are the likeliest marine mammals to end up with tuberculosis.

Read more frightening facts about diseases that we’ve picked up from animals on 10 Deadly Diseases We Picked Up From Animals and 10 Fascinating Animal-To-Human Diseases.