Vodka remains a global favorite. The drink features in countless cocktails, but life outside the bar is where things get interesting. Gather volunteers, give them vodka, and you will soon discover a mean drunk inside everyone and the benefits of exercise swirling down the drain.

Researchers also uncovered the disturbing danger of long-term consumption—but not as lethal as the fake vodka brands flooding the market. Then there were the bottles that committed arson and the circus that fed their elephants vodka by the bucket to rescue them. 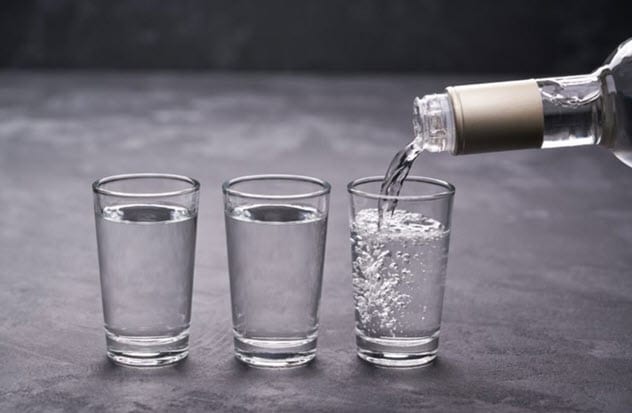 Need alcoholic Popsicles? Stick wine and beer into a fridge. Forget about vodka. After months in the freezer, the liquor remains liquid. This unusual quality boils down to the freezing point of alcohol. Beverages with zing do not share a single point. Instead, it depends on their individual water and alcohol percentage.

Beer and wine turn solid within hours because their alcohol is low compared to hard liquor like vodka. The Russian favorite packs 40 percent alcohol, placing its freezing point at -27 degrees Celsius (-16 °F).

The average freezer is too warm to make vodka lollies. Should you really crave alcoholic ice cubes from Smirnoff, then you must invest in an industrial freezer or liquid nitrogen. Both reach vodka’s freezing point with ease.[1] 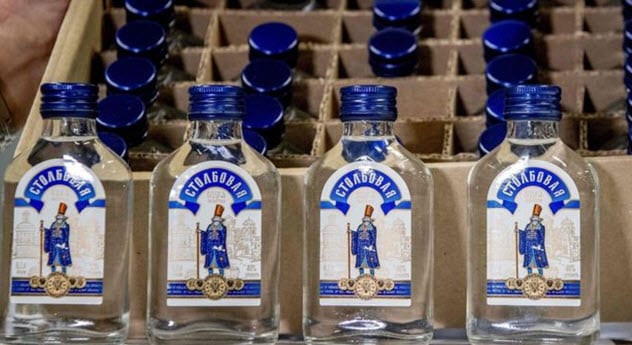 In 2019, Dutch customs officials became suspicious. A Chinese-owned ship called Nebula had docked at Rotterdam with a container full of vodka. All told, it bore the gift of 90,000 bottles.

The paperwork claimed that the Russian vodka was destined for China. However, Dutch intelligence had a strong suspicion that it was really meant for North Korean leader Kim Jong Un.

This made the shipment a problem. United Nations sanctions prohibit the importation of luxury goods into North Korea. When officers wanted a look for themselves, they found the container suspiciously tucked away behind an aircraft in the hull. Although removal could have damaged the plane, the order was duly given by the Dutch Ministry of Foreign Affairs.[2]

Customs seized the shipment. When the news became public, they refused to reveal how they knew the haul was dodgy. Future smugglers might use that information to get luxury goods past Dutch ports. The suspicions about Kim are not far-fetched. He has imported billions’ worth of luxury goods for himself since taking power in 2011. 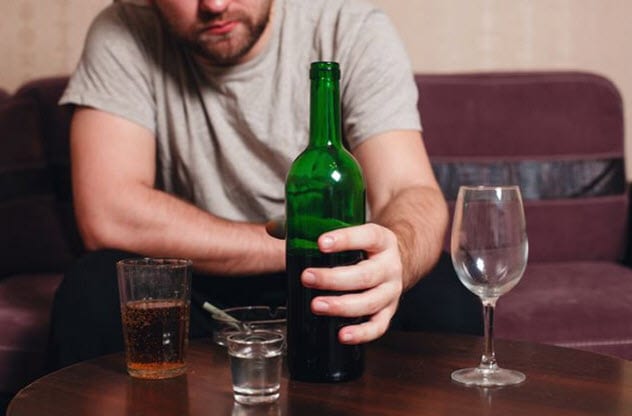 In 2018, 50 Australian men volunteered to play a game inside an MRI scanner. A few enjoyed vodka beforehand. Whether sober or tipsy, everyone was told that it was a reaction-time task and their opponent was a student playing in another room.

In truth, it was an aggression-inducing game and their opponent was a computer. The winner was the person who pushed a button first when a colored block appeared on the screen. The loser got blasted with a sound.

The men were under the impression that the “student” chose an annoying volume with which to punish them when they lost. It was enough to make anyone crabby.

The scans showed that the inebriated bunch experienced reduced brain activity in the prefrontal cortex. This nugget is responsible for moderating anger and social behavior. It also supports inhibition and memory.[3]

When they won and chose to react with an aggressive volume against their opponent, the dip was significant. Theoretically, this makes any drunk person less capable of tapping into etiquette and control—and more likely to respond aggressively when annoyed. 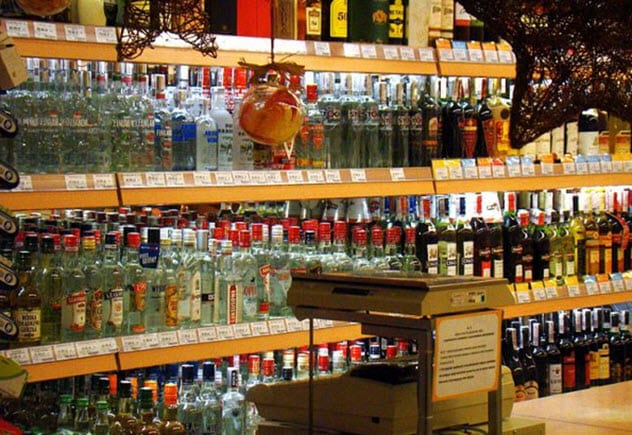 Insurance companies get strange claims. The following would have tested the faith of the most salted company. In 2012, a liquor store in Minnesota experienced a fire that reached about 3.7 meters (12 ft) into the air.

The owner claimed that sunlight had set a bottle of vodka alight, which exploded and fueled the problem with its flammable contents. If that was not weird enough, the incident took place in a town called Burnsville. Thankfully, the store’s security camera taped the whole thing.

Most people have scorched something by focusing the Sun’s energy through a magnifying glass. In this case, a vodka bottle acted like a lens and caused the sunlight’s heat to converge on a single point in the display case—which was made of cardboard. The resulting blaze caused several bottles to explode and fuel the flames.[4] 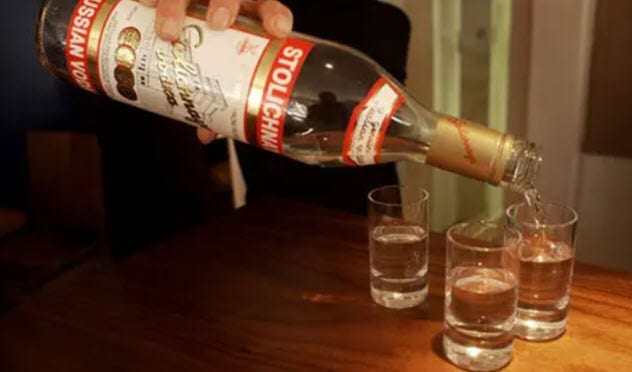 In 2013, new laws allowed Russian police to arrest foreign visitors to their country. The crime? Being homosexual or showing support for those who are. The country had already banned pride marches in Moscow and St. Petersburg, and attacks on LGBT individuals were increasing.

Dan Savage took up the challenge to bring attention to the latest laws. This US sex writer once famously took on former US Senator Rick Santorum for the latter’s criticism of gay marriage.

Savage started a campaign to boycott vodka. As the product has epic sales, this was meant to kick people where it hurt. LGBT organizations soon spread the word. Several bars in Chicago stopped serving vodka, and countless activists stopped buying it.[5]

One of the boycotted brands, Stolichnaya, responded. The company made it very clear that they supported the LGBT community and had no ties with Russia. Stolichnaya was produced in Latvia. Another brand targeted by Dan Savage was Russian Standard vodka, which was produced in Russia by a wealthy oligarch. Perhaps unsurprisingly, there was no reaction. 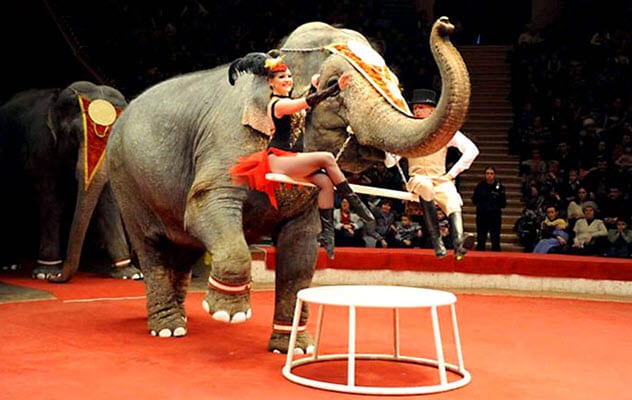 In 2012, two circus elephants were loaded into their trailer. The circus was moving from Novosibirsk to Omsk in Siberia. As that night was one of the coldest of the year, their trailer’s heating system was switched on.

While on the road, a glitch sparked a fire. The elephants’ compartment was wood-lined, and the flames soon forced the circus group to a halt. There was no choice but to remove the two giants and let them hang out in the bitter cold, which was an estimated -41 degrees Celsius (-42 °F).

The animal handlers knew they had to do something to help Magda and Jenny. When the circus staff bolted for the nearest liquor store, witnesses thought that the shocked performers planned to get drunk to soothe their nerves. Instead, they poured two boxes of vodka into buckets, mixed them in warm water, and made their elephants inebriated.

The remedy kept them warm until a veterinarian could arrive and while the staff searched for shelter. Apart from a little frostbite on the ears, Magda and Jenny were described as otherwise unharmed and “merry.”[6] 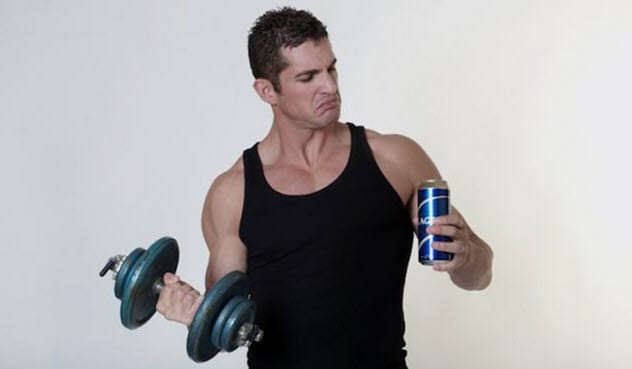 In 2016, a study focused on the effects of alcohol on training. The team already knew that high alcohol levels inhibit the body’s signal telling muscles to repair and grow. Strength training boosts that signal. The idea was to test whether alcohol or exercise would have a greater effect on the signal.

The volunteers included 10 men and nine women. After workouts, they were given either vodka or a glass of water where the rim was smeared with vodka. The latter would have no effect on the participants, but it tricked them into thinking that everyone received diluted vodka. Those earmarked for drunkenness were given the equivalent of up to eight alcoholic drinks within 10 minutes.

The results went both ways. The repair signal was reduced in men but not in women. The reason remains mysterious, but men’s bigger post-workout testosterone surge could have something to do with it.[7] 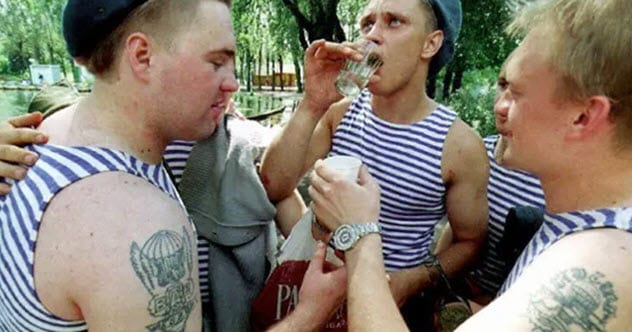 Vodka lovers need not panic—unless you live in Russia. One study found that vodka shortens the lives of men. Researchers interviewed 151,000 men from three Russian cities to gauge their drinking habits.

After about 8,000 died, the study swung into its second phase. The team analyzed the causes of death and found something disturbing. The heavier vodka drinkers risked an early death. In fact, the drink was linked to 35 percent of those who died before age 55. In general, a quarter of Russian men perish before that age from all causes.[8]

This is very high, considering that deaths before age 55 count for only 10 percent of men in the United States and 7 percent in the United Kingdom. Worse, the dangerous limit was a mere three or more half-liter bottles a week. Russian life expectancy might not improve any time soon. Vodka is still heavily consumed, and villagers often make it at home. 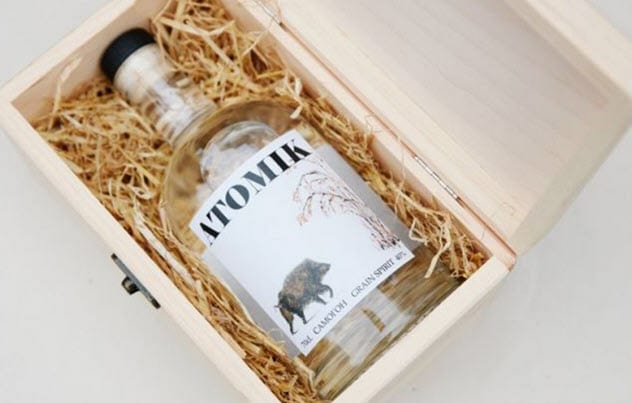 Chernobyl is the number one tourist attraction in Ukraine. In 2018, around 60,000 visitors trooped to the nuclear disaster area. For those who love the thrill, they can now buy vodka made from grain and water harvested from the exclusion zone.

This area was once forbidden. When the meltdown occurred in 1986, the contamination was so bad that 2,600 square kilometers (1,000 mi2) around Chernobyl was thought unfit for life for the next 24,000 years.

These days, the Ukrainian authorities claim that the danger may have been overrated. However, tourists cannot visit certain hot spots and the grain also tested positive for radiation.

As bad as that sounds, the distillation process removed the radioactive waste and subsequent tests declared the vodka safe. The brand, named Atomik, is the first consumer product to come from the region since the disaster. The bottles will be sold to Chernobyl tourists, and around 75 percent of the profits will go to the zone’s villages.[9] 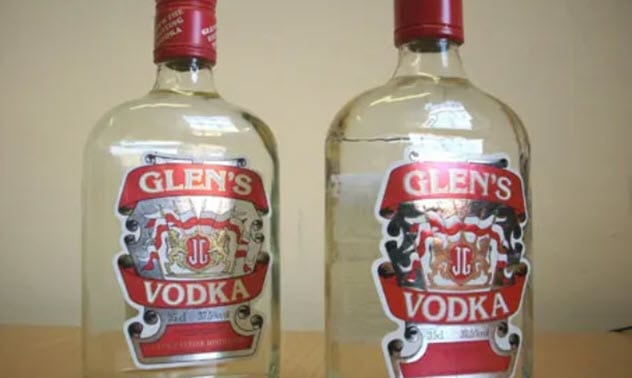 The United Kingdom is facing a growing problem with fake vodka. Across the country, officers have seized and tested suspicious bottles. These included brand names like Smirnoff, Glen’s, and Red Admiral.

The counterfeit vodka had higher alcohol levels than what was stated on the label. But that was the least of the authorities’ problems. The analysis showed that the copycats contained lethal ingredients.

In Surrey county, a batch of Glen’s vodka was spiked with 235 times the allowed amount of methanol. This chemical is used to make antifreeze and can cause blindness. In West Sussex, four brands contained a dangerous industrial solvent called Propan-2-ol. Another frightening ingredient, chloroform, turned up in 700 bottles of Drop vodka in Wokingham.[10]

Shoppers were warned to be on the lookout for vodka that is too cheap, has badly printed labels or spelling mistakes, or is not filled to the same level as other bottles. Making a safe choice could be a challenge. The number of places selling the fake liquor is seemingly on the rise.