As the controversy about public statues to Confederates continues, some have said it makes no sense and serves no purpose to allow these monuments to stand. Others have said this just isn’t done and that in no other case does one allow statues of their enemies to be out in public like this. At best they should be stuck in a museum somewhere.

So the question is, are there times when such statues are allowed to remain out in the open for all to see? Statues of those one fought against and spilled blood fighting and died to defeat? And if so, why? Do these serve some purpose? 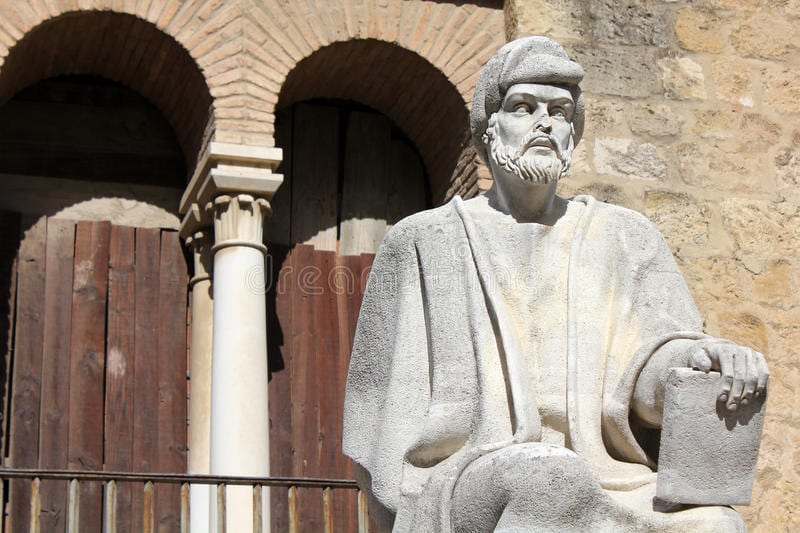 Spain was invaded and occupied by Muslims in 711AD. The occupiers were eventually driven back out of Spain, but only after around 800 years of on and off war and the terrible things that happen in war.

We might be surprised, then, that they not only allow statues of their once Muslim overlords. They also spend time and money maintaining them. Statues not only of the peaceful thinkers among their occupiers, like Averroes, but also of the rulers and military leaders, the people who were killing them, like Almanzor and Abd-al-Rahman-I.

So why do they do this? In part, it’s simple. Money. The history of Spain is interesting and it attracts tourists. But it might also be that this is part of a nation’s healing process. After enough time goes by, you want reminders out there of your history, of how you got to where you are, and part of that process includes putting up monuments to your enemies.[1] 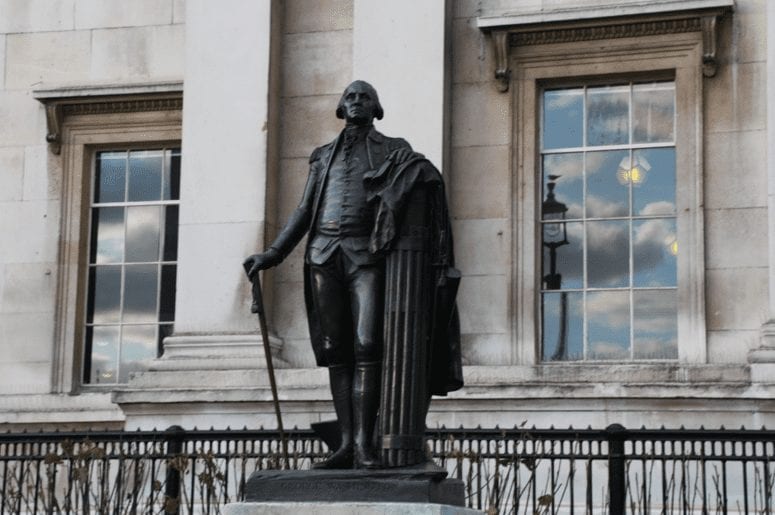 From Olde England’s perspective, Washington was enemy number one. Not only did he lead the revolution that began the process of ending colonialism, but he had learned his military skills while serving as an officer in the King’s militia! What a traitor!

So why would anyone put a statue of George Washington up in England. Because, there he currently stands, in London, England. The heart of the capital of the country that he led a long hard war against. (A civil war, too!). Why would they do this?

Well, sometimes one’s enemy becomes one’s friend. The United States crossed the ocean to help England win WWI. Afterwards the state of Virginia offered the Washington statue to London as a gift, and England graciously accepted and set the statue up for all to see. (And perhaps they suspected they might need help from the United States again?) Also, since Washington had vowed after the American Revolution to never again step foot in England, they even honored his wish by standing the statue on some good old Virginia sod. Or—so the story goes.[2] 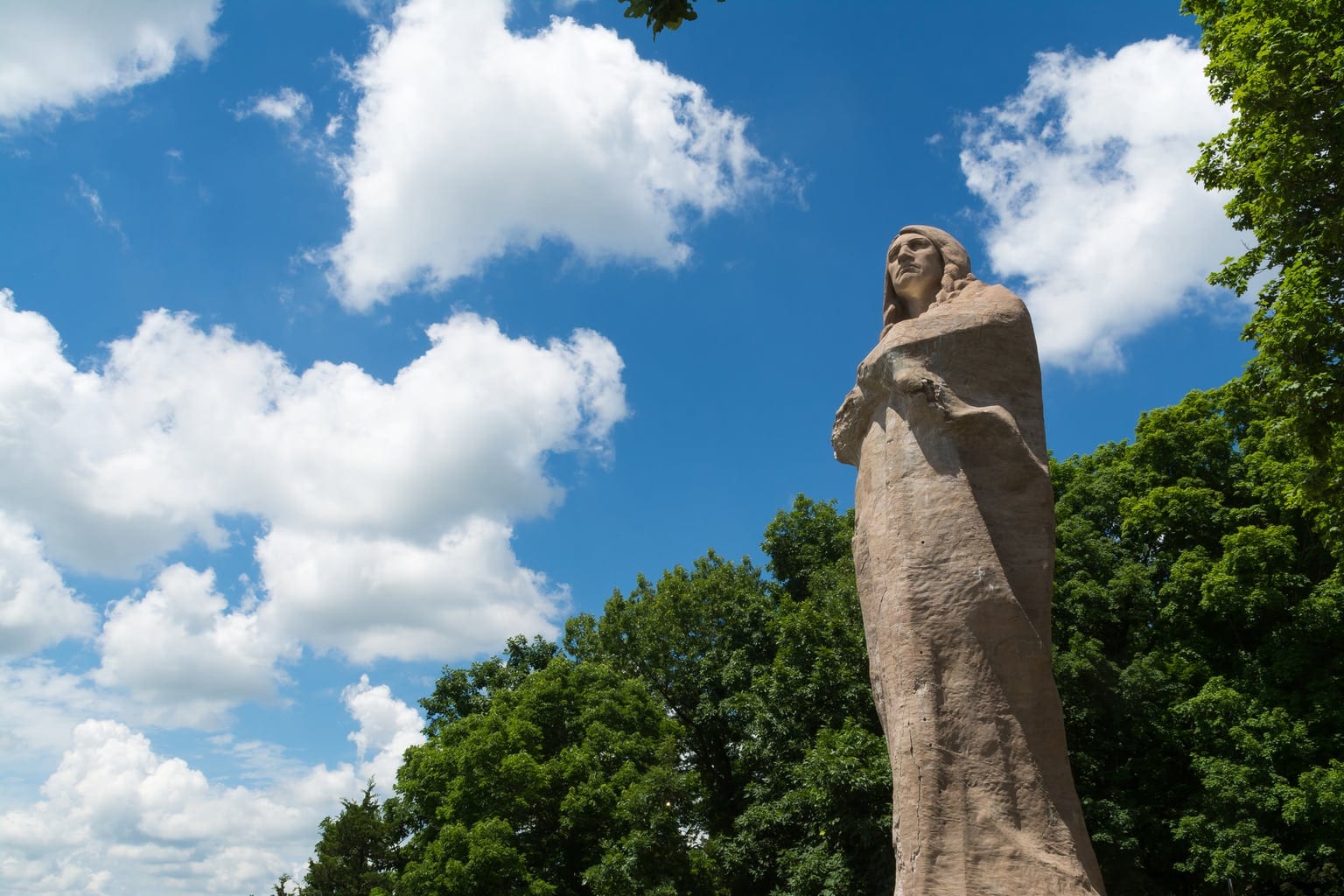 The European colonies in North America fought numerous battles against the native peoples they found there in what we now call the American Indian Wars. These wars lasted for centuries.

Despite years of terrible war, statues honoring Native Americans have been put up in many public places around the United States. For example, a statue stands in Pilgrim Memorial State Park in Plymouth, Massachusetts to honor the Wampanoag chief who helped the Pilgrims when they arrived centuries ago. Utah, noting the sculptor was born in the Beehive State, put up a replica of the statue outside of their capitol building.

In 1911, a 48 foot tall, 270 ton statue was erected in Illinois. The statue, believed to be the world’s second-largest concrete monolithic statue, is informally called Black Hawk, the Native American leader in an Indian war fought in the area. Recently the statue, which stands in Lowden State Park, was showing its age, so people anted up hundreds of thousands of dollars to restore honor to their once enemy.[3] 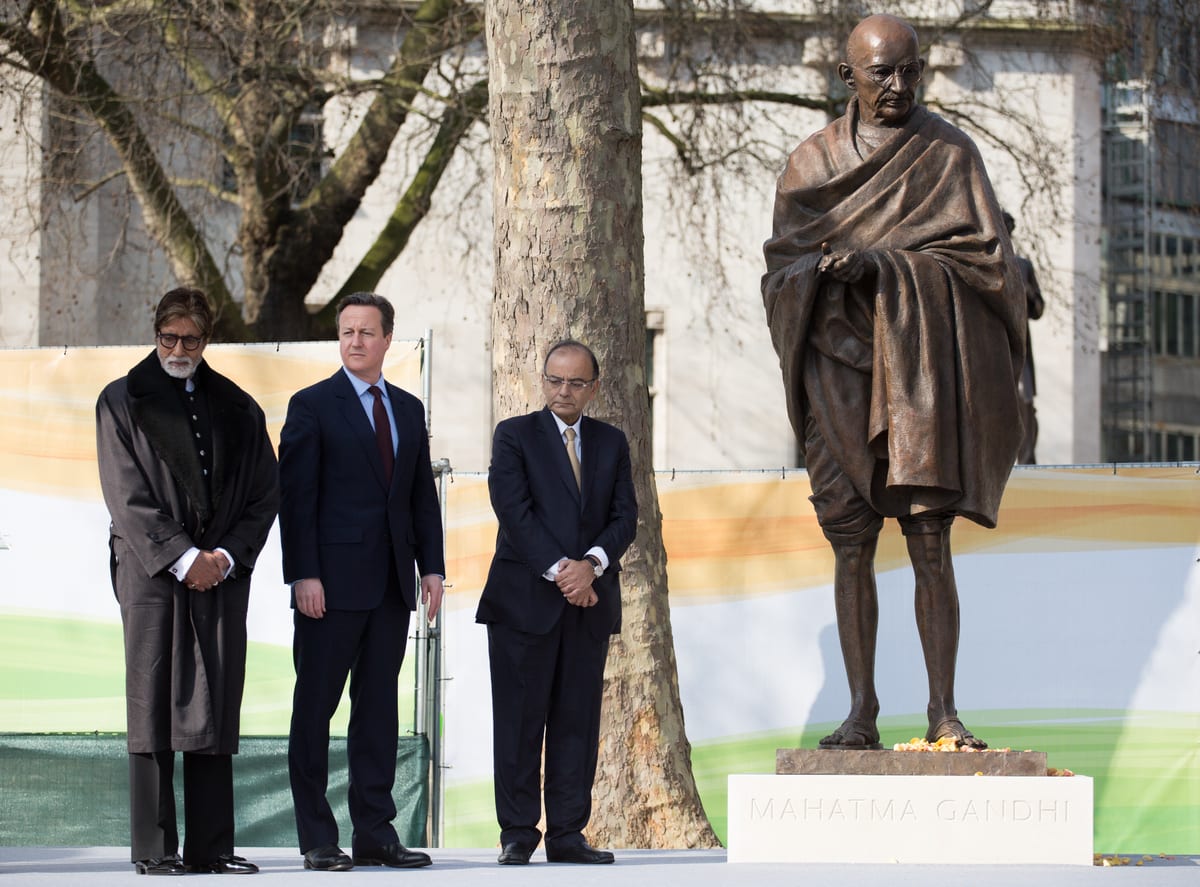 Mahatma Gandhi was another traitor to England. He was born in another English colony—India. After he studied law in London and they admitted him to the bar in the 1880s, he paid them back by leading another revolution against them. This was at least peaceful, at least on the part of those who were in revolution.

But again, in London there stands a monument to the great man who helped further the process of setting the sun on the English Empire. What a forgiving people. Maybe if you want to be honored in England you need to lead a revolt against them?[4] 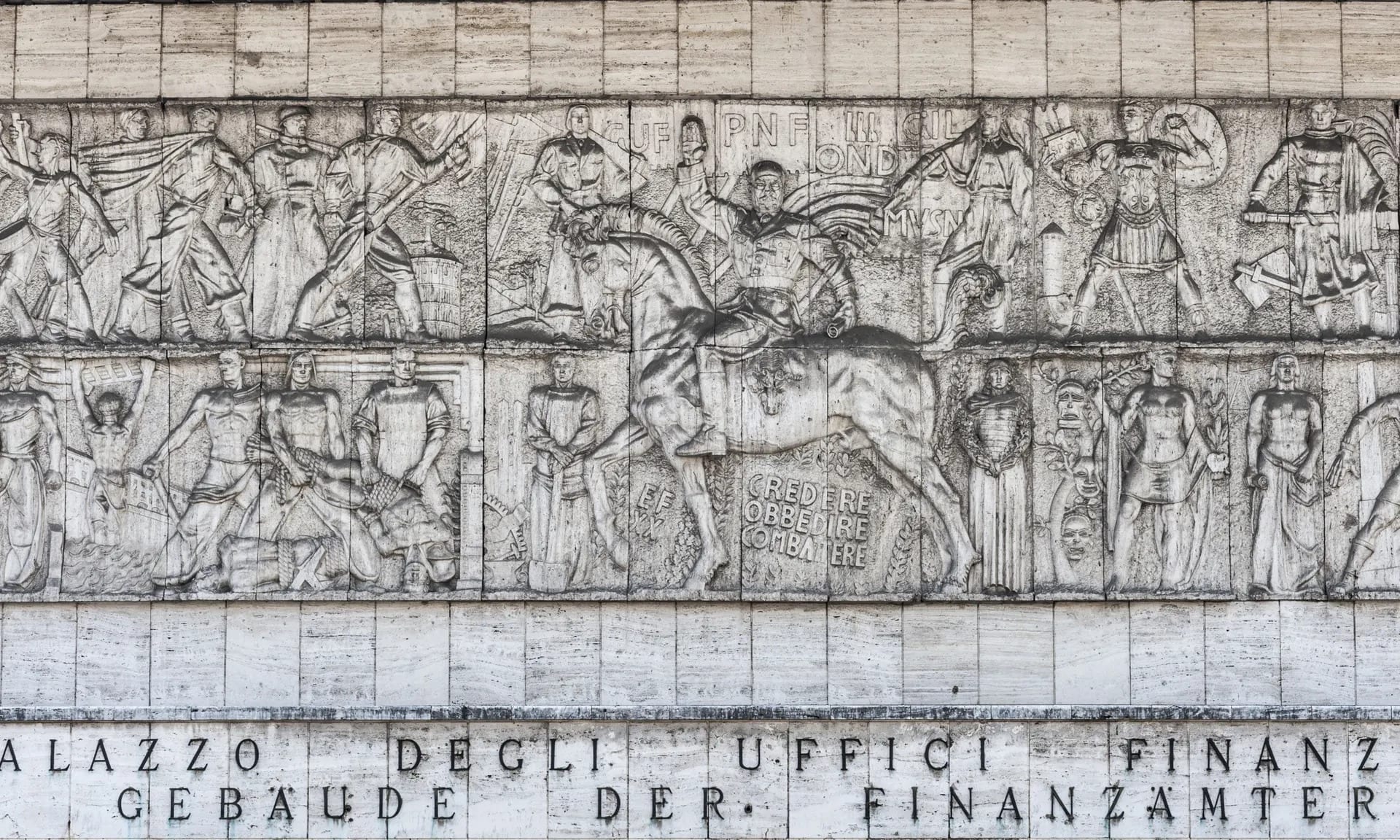 Mussolini founded Fascism in Italy. He led the Black Shirts to do terrible things to the Italian people. He even inspired Hitler who took the whole Fascist thing and really ran with it.

At the end of WWII, Mussolini wasn’t killed by the Allies, but instead by fellow Italians. And then his body was mutilated and hung naked upside down in Milan’s public square. Clearly, they really didn’t like him. Fascism was made illegal in Italy, but there was a problem. Mussolini and the Fascists had erected tons of statues to themselves during their reign.

Italy is famous for its statues. And they have a very long history. And they understood that sometimes you regret the loss of statues later on. So, what to do with the Fascist monuments?

One example of a solution is in a small Italian town where the local government for decades after the war used a fascist-era building with a massive bas-relief of Mussolini. It includes the nice fascist-y slogan (in Italian): “Believe, Obey, Combat.” In 2011, the national government ordered the town to do something about this. There were those who wanted to destroy the monument, but others who saw value in preserving the historic work. So, as a compromise, they now superimpose a quote on the monument—an LED-illuminated inscription by a German Jewish philosopher: “Nobody has the right to obey.”[5] 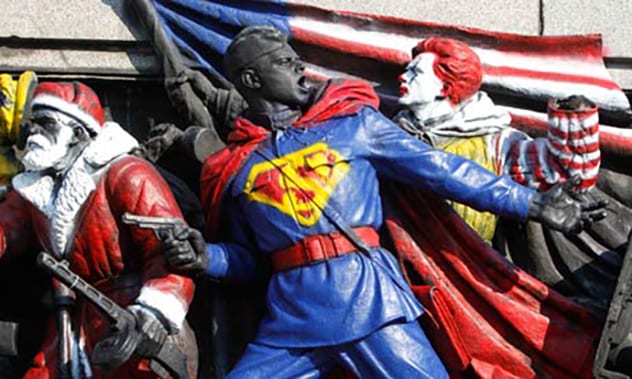 The Soviets, like most totalitarian regimes, liked to erect statues of themselves all over the place. In Sofia, Bulgaria, for example, they put up a statue of themselves liberating Bulgaria from Nazi occupation (or was it of themselves occupying Bulgaria?!) After decades of occupation, Bulgaria threw off their Soviet overlords and joined the European Union and NATO.

You might think maintaining an old Soviet era monument in your capital would be out of the question. But they actually have left it stand. And it’s proving to be a bit of a problem since people keep vandalizing the statue, to the dismay of Russia. But this isn’t just random vandalizing, its people adding their own message. A message all the more powerful as a contrast to the underlying implicit message in the original—of Soviet domination.

The statue has been painted pink, covered in the colors of the Bulgarian flag, and perhaps most famously, the Soviet soldiers were painted as Western icons – Ronald McDonald, Santa, superheroes like Superman and Robin (Batman was apparently busy off fighting crime elsewhere).[6]

4 Memorials in the U.S. to our World War Enemies 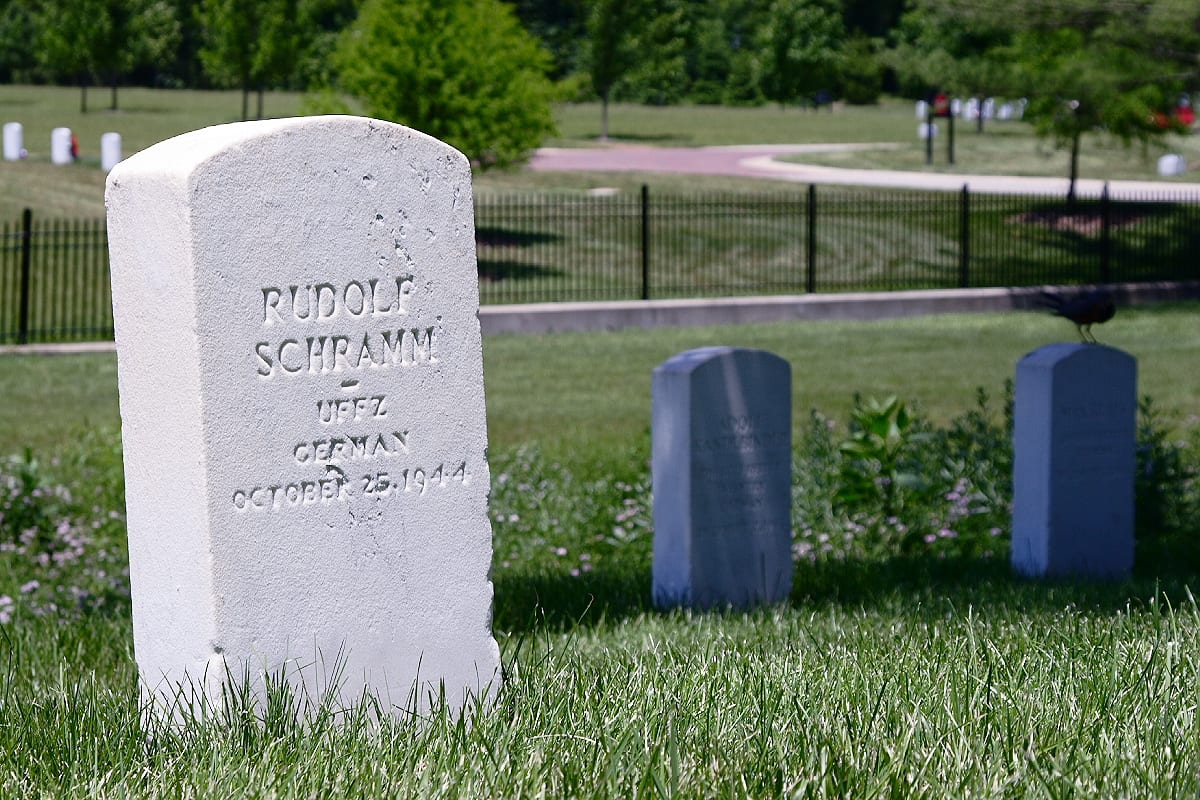 In 1935, Germany erected a POW memorial at the Chattanooga National Cemetery to honor German Soldiers who died in American POW camps during World War I. There are 78 German POWs buried there, including 22 German sailors who died in Hot Springs, NC, and dozens of German POWs who died in Georgia. Their remains were reburied in secret and the local papers were only told about it the next day.

There’s also a German POW monument in Utah. The German War Memorial to the Victims of War was erected in memory of the German’s who died while interred at Fort Douglas during WWI. Dedicated on Memorial Day, May 30, 1933, it includes the names of 21 German POWs who died 1917-1918. The memorial is now a monument for POWs of WWII as well – since 20 German, 12 Italian, and 1 Japanese WWII POWs were added to those buried there.[7] 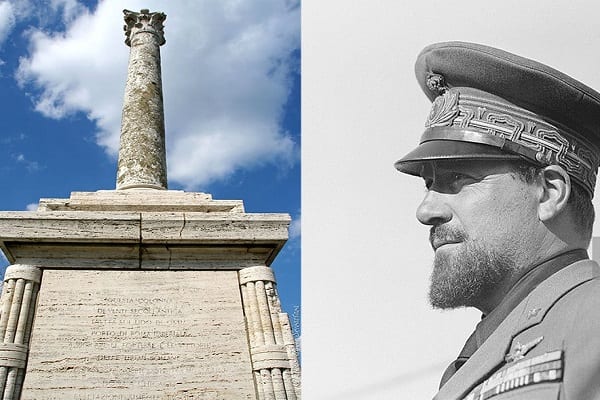 In Chicago stands an ancient roman column, a monument gifted to Chicago by Mussolini to honor his air commander, Italo Balbo. The gift was made in 1933, to honor a flight of 25 seaplanes that flew from Italy to Chicago (with some stops along the way). The column stands on a pedestal with words exalting fascism.

It not only remained during WWII, but stills stands today. In all the recent anti-monument fervor it was almost taken down, but then support from the local Italian community saved the monument. Some have argued that the one being honored, Italo Balbo, while yes he was a fascist, was also anti-Nazi and was against the racial laws. And, the feat the monument honors, the 1933 flight from Italy to Chicago, was still an accomplishment worth honoring.[8] 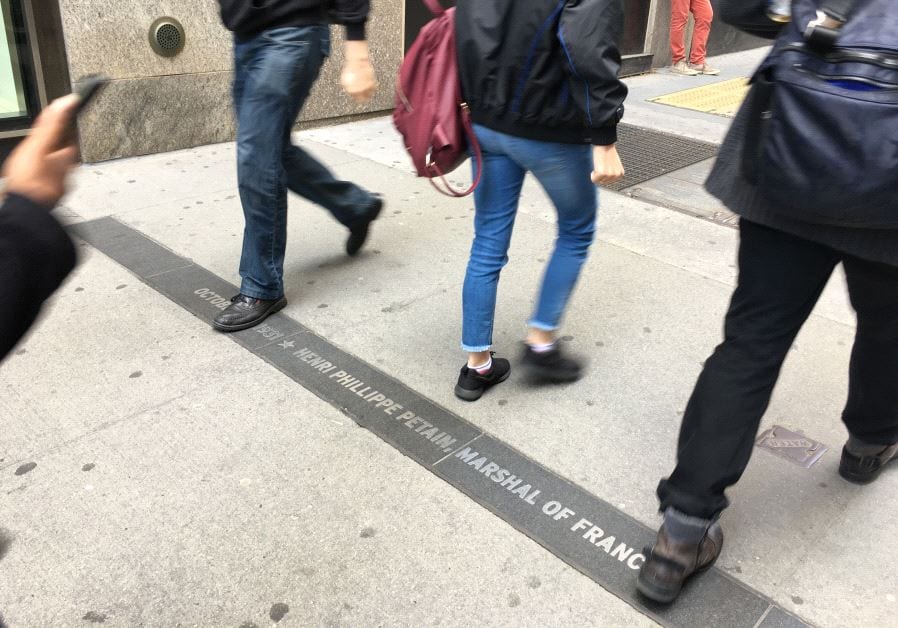 What kind of enemy do people hate the most? How about someone who turns on their own country during a war? That’s what Henri Philippe Petain did. After becoming a war hero in WWI, he was honored in NYC with a ticker tape parade. During WWII, however, the hero turned traitor and collaborated with the Nazi’s, helping them to round up tens of thousands of French Jewish people for extermination.

In 2004, New York City decided to install plaques to immortalize everyone who had been honored with ticker tape parades. Since Petain had been so honored, he got a plaque. In light of all the monument destruction going on in the U.S., the Petain plaque was reviewed by a commission for possible removal. The commission found that it was clear some ticker tape parades were for people we would no longer call heroes, especially by modern standards. But “removal of the vestiges of past decisions risks leading to cultural amnesia.”[9] 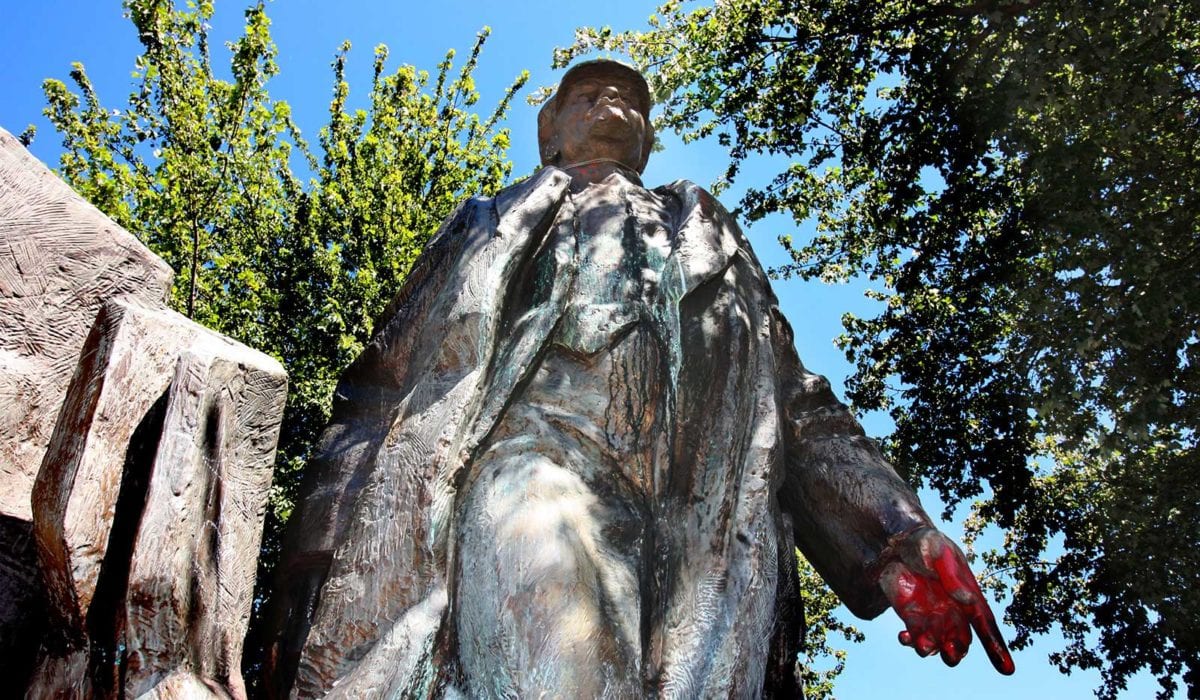 For decades the United States was involved in a tense scary Cold War of brinkmanship with communist USSR, with both sides building up their militaries, including thousands of nuclear weapons, and proxy wars fought around the world.

But in a Seattle neighborhood stands a 16-foot tall bronze sculpture of one of the great icons of Communist Russia—Vladimir Lenin. The statue was rescued by an American veteran who mortgaged his house to save it from a Russian statue graveyard.

Like the Soviet statue in Bulgaria, people have had fun with the Lenin statue, decorating it in various ways. Someone painted his hands red, once he was given a tutu, and another time he was covered in Christmas lights.

Fremont’s website notes, “If art is supposed to make us feel, not just feel good, then this sculpture is a successful work of art. The challenge is to understand that this piece means different things to different people and to learn to listen to each other and respect different opinions.” Yes – that seems to sum this all up nicely.[10]


For more controversial content, check out Top 10 Controversial Statues Around The World and 10 Moments In American History, As Seen From The Other Side.

About The Author: I’ve written a bit for Cracked.com, and have a little writing blog at jackrloun.wixsite.com/scritchandscrawl.