The locals in many countries consume foods that we find to be bizarre, but China has one of the largest varieties of food in the world. Walk down any street market in China, and you’ll find delicious delicacies, tourist treats, and even the downright disgusting. Some of these dishes are known for their tastes, some for being unique, and others for their medicinal purposes. These delicacies can be made from animals, plants, insects, and just about anything else. The saying must be true, “The Chinese eat everything with four legs, except tables and chairs, and everything that flies, except airplanes.” 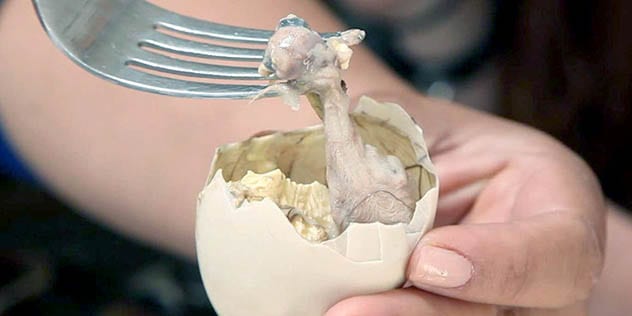 Many of us consume eggs in some form without even questioning it because they are unfertilized and have many nutritious benefits for our health. The Chinese, along with other countries, eat eggs in a very different way known as balut. Balut is a partially developed chicken or duck egg that has been incubated between 14 and 21 days before being boiled and eaten.

Balut is a popular street food that can be found at many roadside markets. It may sound sickening to eat a partially developed duck, but this dish is considered a delicacy in many places such as China. The fertilized egg is boiled for about 25 minutes and is eaten while the egg is still warm. The yolk portion is described as rich and creamy with an overall mild taste, and some eggs contain bones and feathers that are edible, which (according to local belief) make the men eating them appear more masculine.[1] 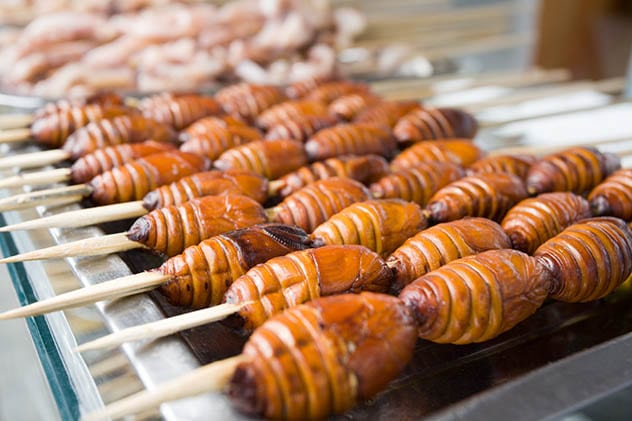 Various insects are considered a delicacy in many cultures. In China, silkworms are one of those insects, and they are enjoyed by the locals. Silkworm pupae remaining after their fibrous cocoons have been harvested are used in several different ways for consumption. The flavor is like shrimp or crab and has a chewy consistency.

Silkworms can be found in local markets cooked several ways or stocked frozen and canned. Chinese-style silkworms are added to stir-fry with your favorite vegetables, soy sauce, and seasonings. It’s normally served up with rice or noodles, or the pupae can be deep-fried and served with your choice of dipping sauce. If you’re not sold on consuming the insect in your stir fry, you can always start with the sweeter and more tourist-friendly version, chocolate-covered silkworms.[2] 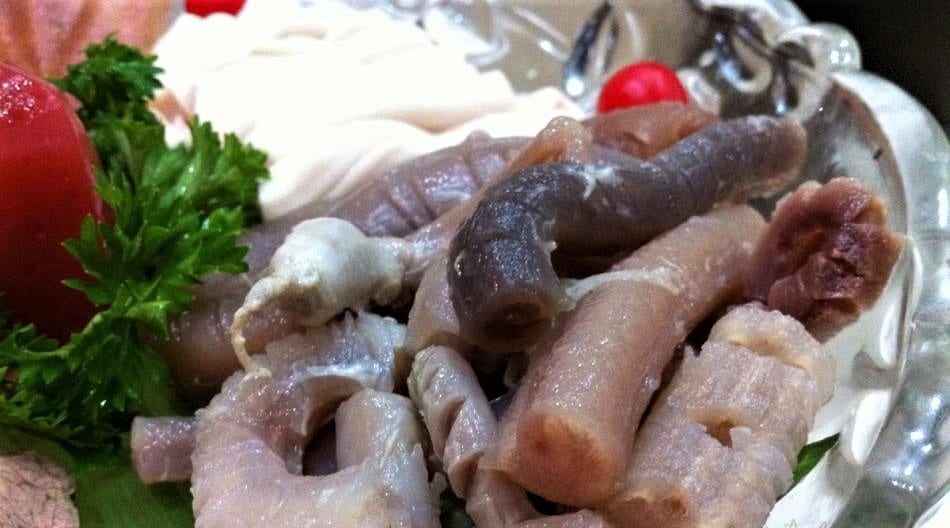 If you are looking to boost your libido, the Chinese have a bizarre food that may help. Sheep penis, along with other animal penises and testicles, is served as a remedy for that problem. A restaurant in China, Guolizhuang, is dedicated to serving all types of dishes with animal genitalia, such as sheep gonads on a bed of curry and steamed sheep penis.

The locals enjoy the dish’s flavor, but they also believe it is good for one’s health. Many of the customers at the restaurant are males looking to increase potency and sexual prowess. The Chinese believe that they can replenish parts of their bodies by eating dishes that contain those same body parts, which is why testicles and penises are consumed to improve sexual health. Instead of turning to a pill, try this unique Chinese dish instead.[3] 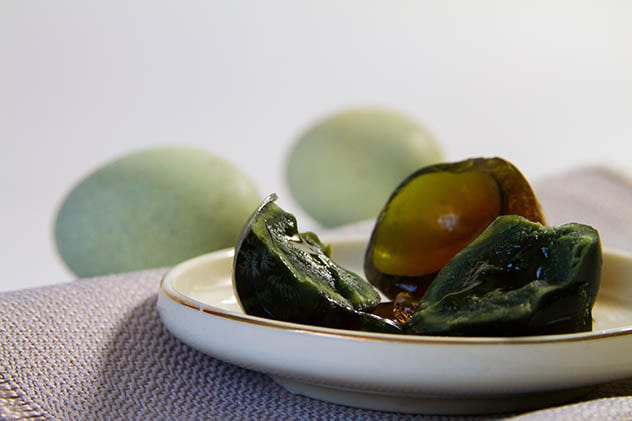 Pi Dan, also known as century egg, is a traditional Chinese food that boasts a unique color and fragrance. It is usually a duck or chicken egg preserved in a mixture of clay, ash, salt, and alkaline material. The egg yolk may appear yellow, dark green, or brown depending on the processing time, but the center is normally soft in all colors. Refreshing, smooth, delicious, and salty are words that normally describe this unique food.

During the process of making these eggs, a chemical reaction turns the egg from white to transparent, and a snowflake pattern may be visible on the outside. Pi Dan can be preserved for up to five months if the eggshell remains unbroken. They can be served in cold dishes such as salads or can be paired with soy sauce and green chilis for a spicy lunch. Century Eggs are also a popular gift for friends and family during the traditional Chinese Dragon Boat Festival.[4] 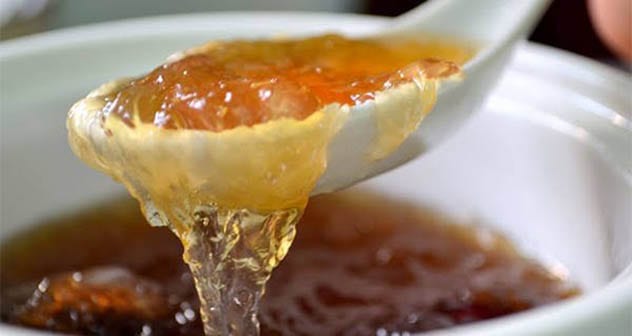 One of the more controversial bizarre foods the Chinese eat is bird’s nest soup. This famous soup is made from a swiftlet’s actual nest. This small bird is found in Southeast Asia and lives in dark caves like a bat. Their nests are made from their own gummy saliva produced by the glands under their tongue. The nest of saliva hardens as it is exposed to the air.

The common way to cook bird’s nest soup is slowly steaming it after soaking it in water. The texture of the nest is soft, like jelly, but it doesn’t have much taste. The taste is not what keeps locals coming back each day for this soup, but it is the benefits that attract the Chinese. If the soup is consumed regularly, it is believed that it will help maintain youth and promote a healthy life and a strong body.[5] 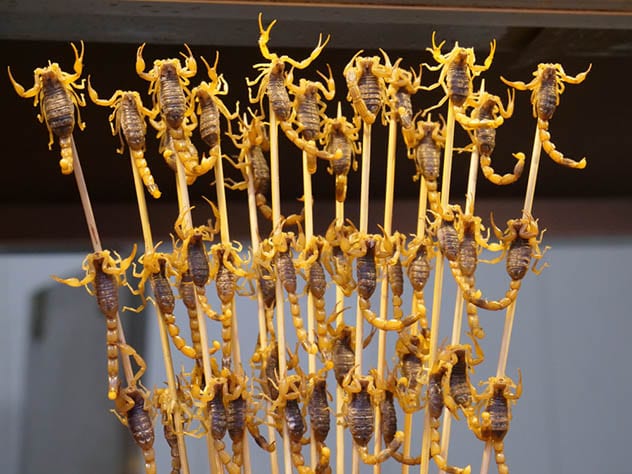 Those looking for something crazy to snack on while walking the streets of China may find scorpions to be a tasty treat. These small scorpions are fried and served on a skewer stick. They can be found on the streets of popular cities to lure tourists into trying something local and bizarre. Since the scorpions are thin, they turn out crispy with a nice seasoning. It is believed that eating scorpions can cure certain medical conditions and can make the blood hotter in cold conditions.[6] 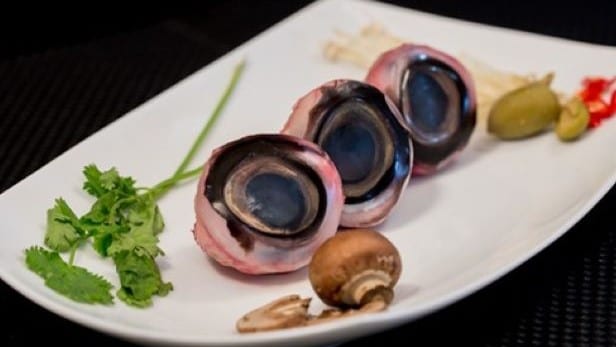 Waste not, want not! This saying seems to describe consuming the entire animal for food, as is the case with fish in China. Many have likely heard of, and may have eaten, fish heads in a soup or stew. But these delicacies are the star of the dish. Tuna eyeballs are common in China and Japan, readily available to order in restaurants or purchase by the pound in the market.

Tuna eyeballs are traditionally cooked with soy sauce and herbs. Some prefer them battered and served with vegetables and hot sauce. They can also be eaten raw, although caution should be taken when doing so as they may contain bacteria. Cooked tuna eye changes color when cooked, with the surrounding muscle and fat considered a tasty treat. People say the eyes have a wonderful umami flavor. They also provide tremendous health benefits as they are high in proteins and Omega-3 fatty acids.[7] 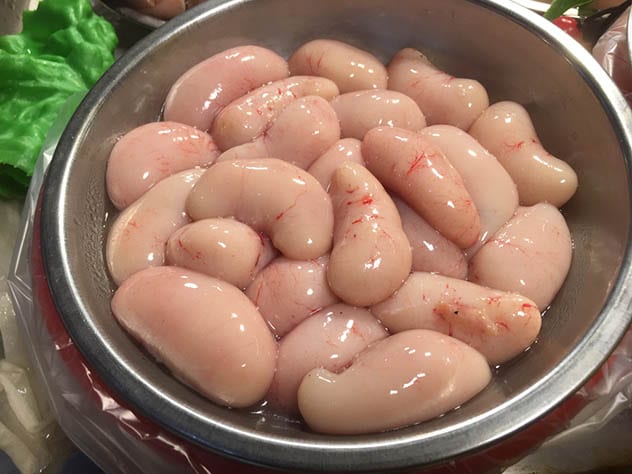 KFC offers several types of chicken on the menu, but you’ll have to search other places in China to find chicken testicles. These juicy delicacies are said to enhance male prowess and improve a woman’s skin tone. They are available in both pink and black, and their size ranges anywhere from one to two inches long.

Their casings contain flesh making them like little sausages. They are lightly cooked to keep them tender, and juice will ooze into your mouth as you take the first bite. After boiling or frying the chicken testicles, they will offer a mild flavor and are best served with rice, noodles, or even broth.[8] 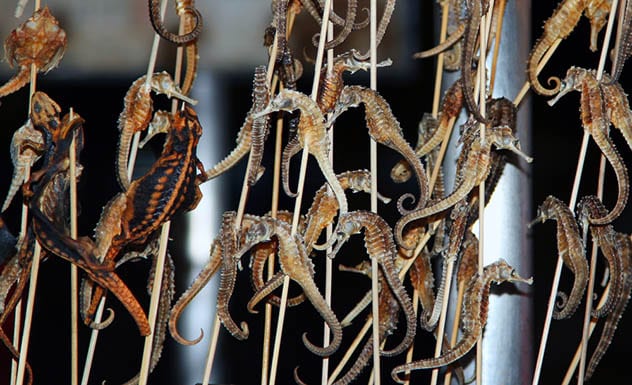 A seahorse is one of the cutest small marine fish found in the sea, but it is also found on China’s streets as a snack. Seahorse has a squid-like consistency and is very salty. They are mostly found in soups or on kabobs, common at several street markets. However, you must be careful when consuming seahorses because they have sharp pieces that can get caught in your gums or teeth.

The Chinese also believe there are great benefits to eating seahorses. One Chinese proverb says that eating a seahorse can keep an 80-year-old grandad young. Many locals use it as an ancient Chinese medication for energy and to boost sexual performance. They can be mixed with herbs and boiled as a tea to treat asthma and male sexual dysfunction. Unfortunately, it appears that seahorse numbers are declining due to the high demand.[9]

Turtle Jelly or tortoise jelly, also known as guilinggao, is a Chinese jelly-like dessert. It is traditionally made from various types of a turtle’s bottom shell and several herbal products. Most turtle jelly comes from commonly available turtle species to keep the price low, but some extremely expensive options are available and are made using ingredients from the golden coin turtle. Some turtle jelly on the market today doesn’t even include any ingredients from a turtle.

This delicacy is also used for medicinal purposes in China. It is said to improve circulation, assist muscle growth, and restore kidney functions. Many believe that regular consumption of turtle jelly can improve skin by giving it a healthier complexion. It is usually dark brown or black in color and slightly bitter, but many sweeteners can be added to improve the taste.[10] 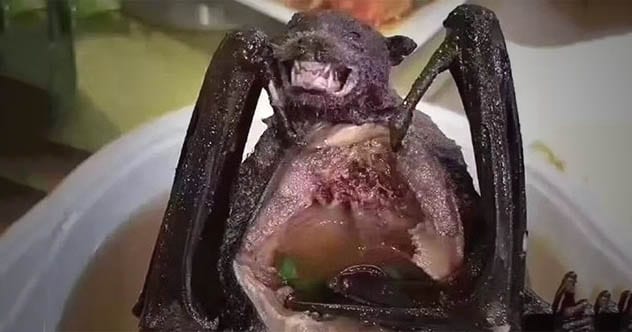 Under the circumstances, it would be remiss to exclude bat soup from this list. And while it is unlikely that bat-eating is the cause of the current Wuhan flu pandemic, it has certainly been pushed well into the spotlight as a result. Bat soup contains an entire bat placed in a soup bowl after boiling with chicken broth. The bat is dissected with a knife and fork, and the broth is then eaten with a spoon, along with the creature’s innards. Hair is present in the dish, along with the membranes of the bat’s wings.

The dish is allegedly rather delicious, but we are forced to conclude that it is very unappetizing to see an entire bat floating in front of us. The bats are also capable of carrying a number of human transmissible diseases, and the practice is considered unsustainable by many conservation organizations.[11]