Group members have a bizarre influence on each other. They have false memories, flow like rivers, and lose IQ points together inside a room (but not outside). Misconceptions can also influence a crowd but not in a good way. Indeed, they sometimes convince a gathering to turn deadly or to stay near danger.

There are also fun facts, like the real reason why people struggle to find their friends in a crowd—and the not-so-fun reality for unwanted family members at the world’s largest religious gathering.

10 Large Groups Are Useless In A Crisis 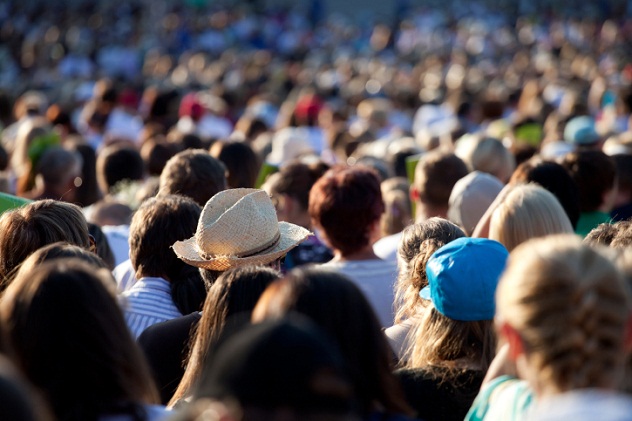 There is safety in numbers. But clustering together during a crisis can also be deadly. A recent study discovered this unhappy fact when they gave one task to 108 teams of volunteers. The groups, ranging from small to large, had to decide whether they wanted to evacuate during a pretend-disaster.

Only one person in each group knew the true extent of the crisis—how dangerous it really was and if an evacuation was necessary or not. The rest had to talk to each other to find out what was going on. This threw them into an authentic experience of speculation and uncertainty.

The uncertainty led to a frightening group reaction. Rumors began circulating and the larger the group, the more they grasped at reassuring opinions while cold-shouldering the negative ones. In this manner, many teams convinced themselves to stay in the danger zone when the situation, in reality, called for an evacuation.[1] 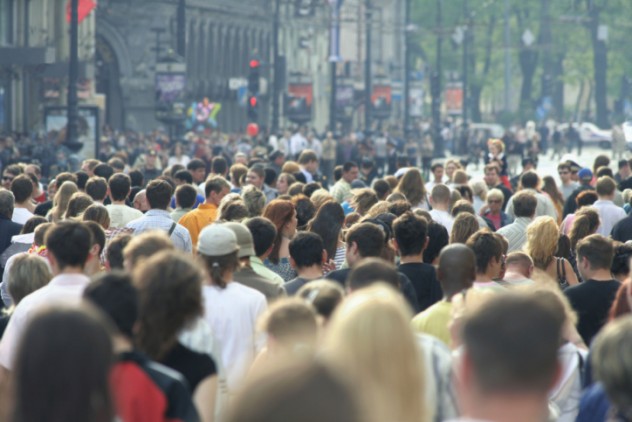 Riots give crowds a bad name. The chaos and violence are not exactly the poster child for intelligence. This bias, that people dumb down when they gather in large numbers, also convinced researchers that pedestrians move randomly and without group intelligence. The truth is much more incredible.

Moving crowds display a subconscious harmony that makes strangers flow like currents and friends arrange themselves into formations. When friends number three or more, they tend to form a reverse-V, especially when they must walk within a packed crowd. Nobody agrees to do this but it makes sense. This formation allows everyone to keep track of each other with a turn of the head.

To avoid bumping into oncoming traffic, people also swerve to the same side, every time, to pass someone. Whether they lean to the left or right is partially influenced by culture and which side of the road a country drives on. For example, Japanese pedestrians tend to veer left while those in Europe go right. Interestingly, most people start out neutral. But as others keep approaching and passing them on the same side, they themselves adapt to the currents.[2]

8 A Crowded Room Dumbs You Down 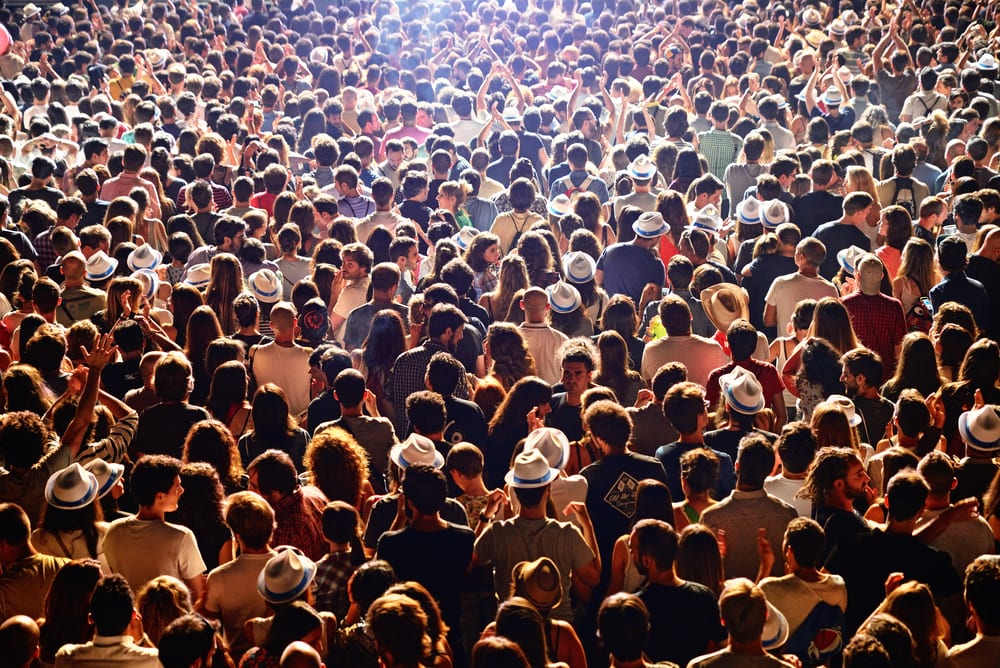 While crowds are smarter than most give them credit for, there is one situation that kills IQ points. The culprit? Being in a closed space with other people and inhaling the carbon dioxide that they exhale. Most people never link their growing lethargy to a build-up of this gas. When at the office or inside a lecture hall, for example, workers and students instead attribute a dull mind to boredom.

Indeed, for years nobody thought that lecture halls or offices produced enough carbon dioxide to slow people down. However, a recent experiment found the surprising truth. It only takes 24 adults in a large room and four people in a smaller office for focus and decision-making skills to take a serious nosedive.[3]

7 Crowds Turn Dangerous When Treated As Such 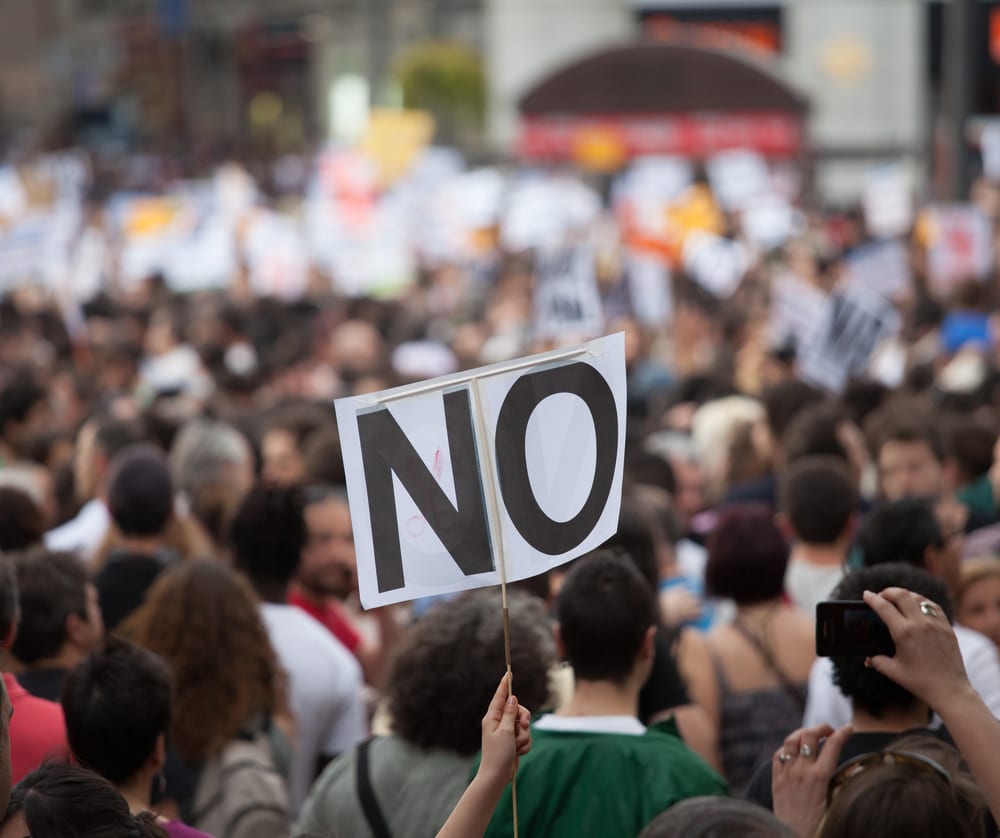 Some crowds are dangerous no matter how delicately the authorities treat them. But unsophisticated policing can play a big role when groups turn unmanageable. This does not mean that all police officers are jerks. But sometimes, they make an unfortunate assumption that sparks violence. They assume a crowd has dangerous potential and decide to use tight control measures “just in case.” This attitude is often poorly received.

When people gather in large numbers, they have a mutual cause but they are not united. They start out as smaller groups within the crowd. To form an identity that includes everyone, a catalyst is needed—like being treated harshly by the police. Once united, the crowd’s mood can swing either way. They might stand together in peace or turn on the authorities as one, sparking anarchy.[4]

6 Not All Stampede Deaths Are What They Seem 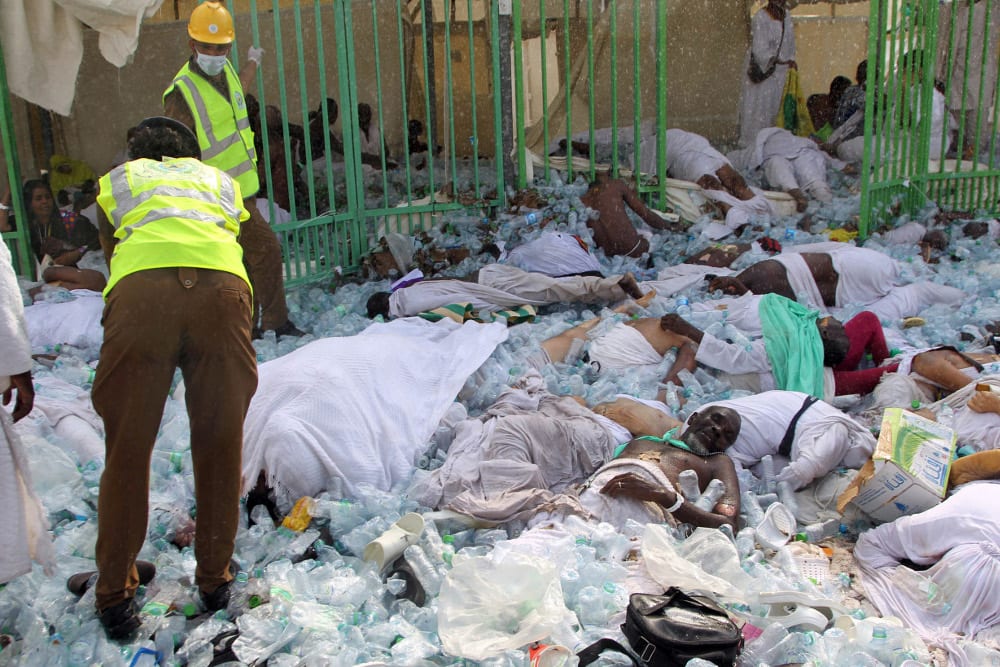 In 2015, over 700 people were crushed to death during the Hajj pilgrimage to Mecca. Since it happened in a tightly-packed crowd, the words “panic” and “stampede” were quickly used to describe the tragedy. Once again, the bias that crowds are nothing but emotional herds created the assumption that something triggered a stampede and while everybody was running for the exit, they trampled 700 people in their way.

The 2015 incident highlighted how wrong this assumption can be. According to the eyewitnesses, there was no panic or running. The whole thing began when a man lost his footing and several people fell over him. More tripped over them.

Since the pace of the crowd was fast-moving, nobody could stop in time. The pile-up continued for some time. In such cases, most victims die because they can no longer breathe—not because they are crushed by feet.[5]

5 Crowds Appear Blurry In The Brain 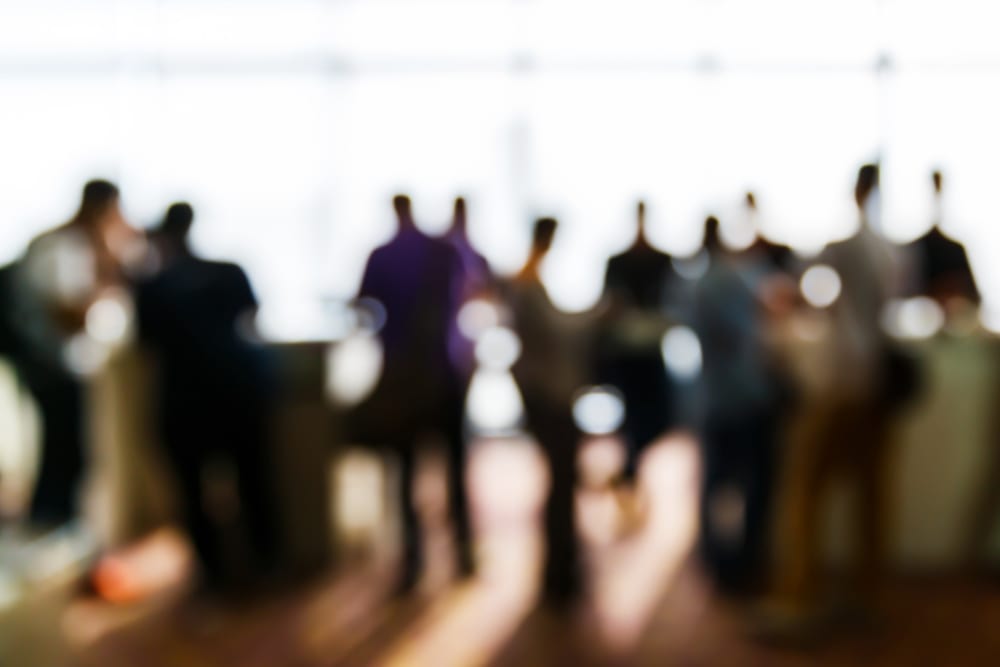 The human mind deals with a sea of information every day. To help the brain cope, mental filters separate the fluff from important details before they reach our conscious thoughts. But one such mechanism is behind an annoying experience (and sometimes a little panic-inducing). At some point, everyone searches for a friend or family member in a crowd and fail to recognize their face.

The effect is called crowding. But when researchers first became aware of it, they named it after cluttered environments and not large groups of people. They mistakenly believed it did not apply to faces. After all, humans benefit from recognizing their own between strangers. But as it turns out, the effect treats crowds as clutter too.

When this happens, the brain perceives faces as blurred edges and lines. While we do not see the smudged vision, it can significantly slow down the search for loved ones in a crowd. How do people spot the person that they are looking for? More often than not, they recognize their body language.[6]

4 The Tipping Point Is A Myth 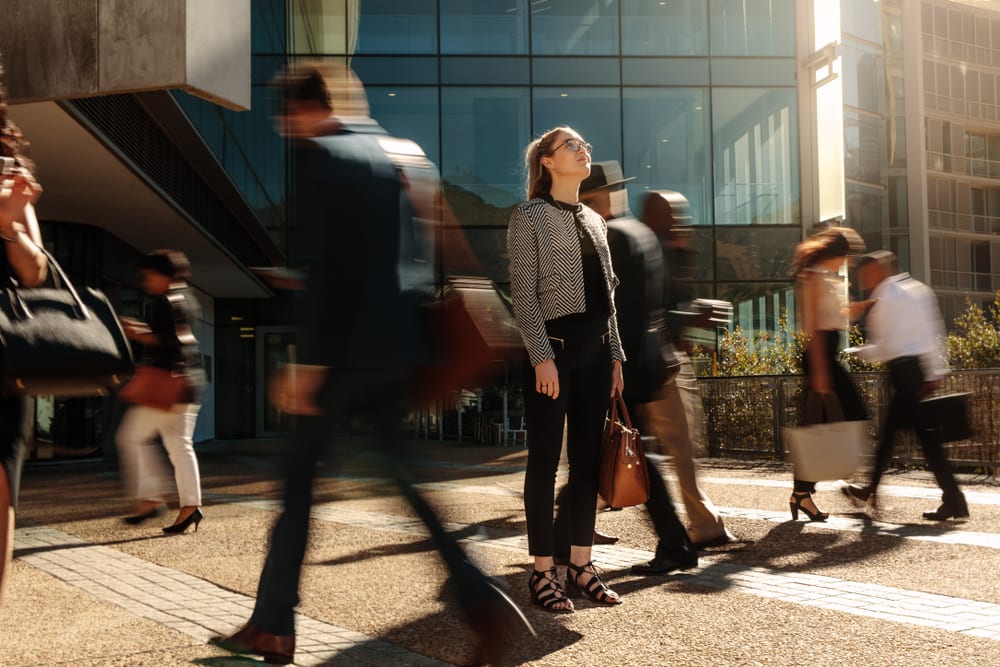 In the animal kingdom, the tipping point is real. It describes the moment when a flock of birds or a shoal of fish suddenly looks in the same direction. This helps them to turn together into a new direction without a major smash-up. For decades, researchers swung the data from a famous 1960s experiment to support their belief that human crowds also have a tipping point. In other words, people follow the gazes of others until a threshold is reached when everybody suddenly looks in the same direction.

In 2012, another experiment, with high-tech surveillance equipment and actors, smashed the myth. Copying the 1969 ploy, the actors stood on a busy street and pretended to look up at something. Their numbers were sometimes few, at other times as many as 15. Eventually, passersby followed their gaze but the effect was weak. Less than 30 percent copied the actors’ behavior and most never even stopped walking.[7]

Every 12 years, the world’s biggest religious gathering takes place in Allahabad. Located in northern India, the city hosts a festival called the Maha Kumbh Mela. Roughly 80 million Hindu pilgrims visit Allahabad to bathe away their sins in the River Ganges. Others visit the festival with less honorable intentions. They take along unsuspecting and unwanted elderly relatives to abandon them.

It is easy to leave somebody behind in the swirling masses without getting caught. Charities round up the elderly and take them to lost-and-found tents. Some are genuinely separated from their families who then claim them back. But dozens are abandoned at the festival each time. Almost none find their way home—because they do not know where home is. Having lived in rural isolation their entire lives, few can name the district where their village is located. Their fate is dismal. While some end up at shelters, most live out their days begging on the streets.[8] 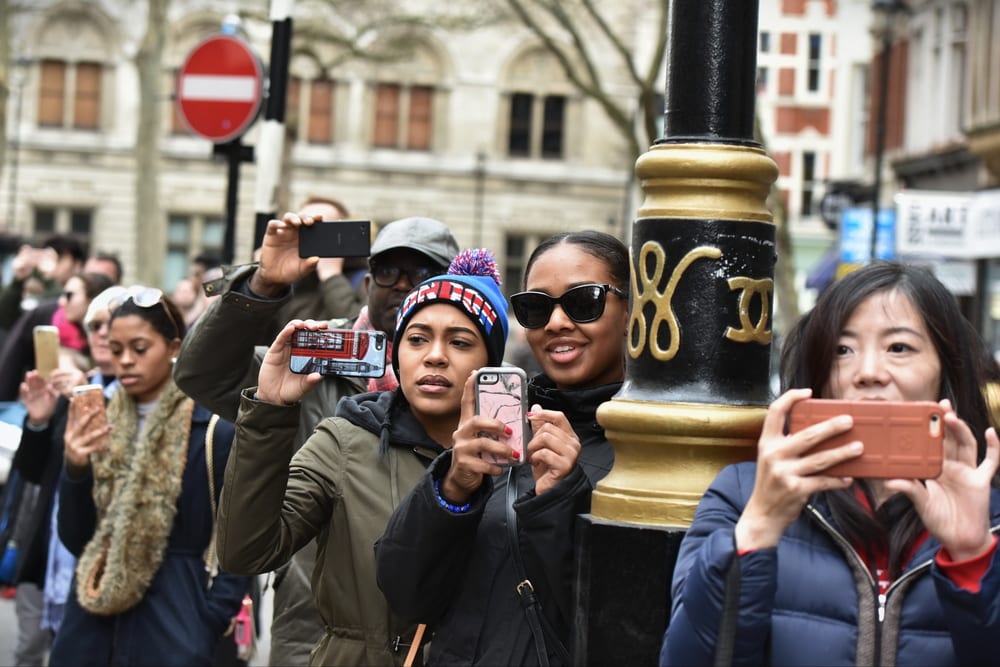 When someone is being harmed but receives no help, despite the presence of a crowd, the bystanders are often branded as callous. Understandably, most people cannot condone the lax behavior once they learn of the incident. But things are not as simple as they appear.

When something disturbs the peace, most individuals are uncertain about what to do. To both assess the situation and find cues about how to behave, they look at how others react. In all likelihood, others are doing the same. This might appear to the individual that nobody is reacting—so they do nothing.

Groups are also prone to the thought, “Someone else will do something.” Someone else will make that 911 call, go see what the screaming is about, or stop the guy who is beating his kid in the head. Such apathy is not callousness, per se, but it can sink to a dangerous level. When that happens, a crowd can watch something as extreme as murder and do nothing, like the infamous killing of Kitty Genovese from Queens in 1964.[9] 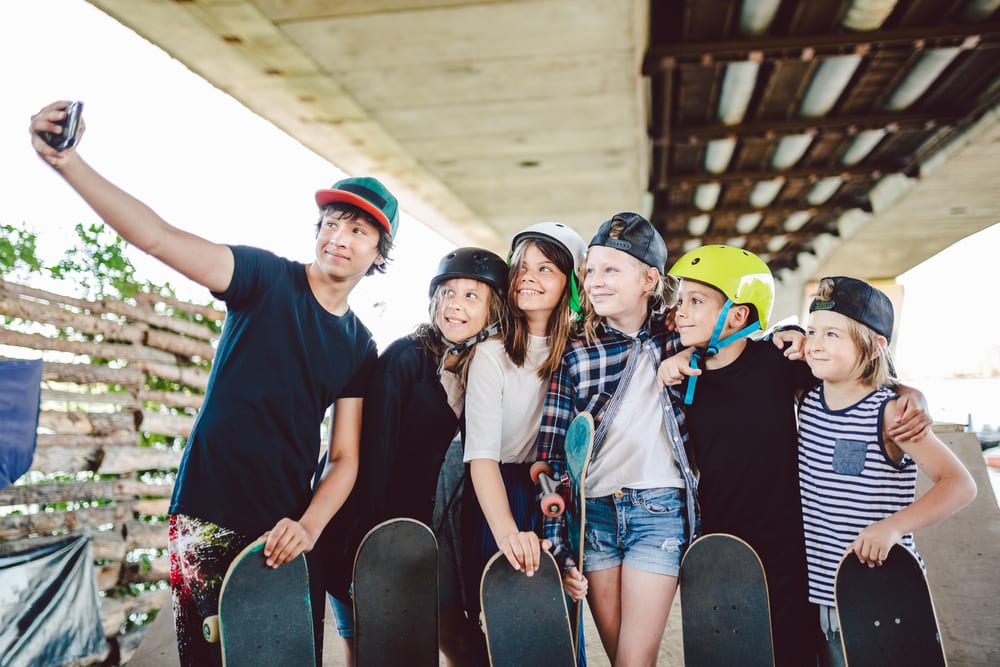 This seems too far-out. However, it happens so often that psychologists have coined the phrase “memory conformity” to describe how group memories can contaminate the ability of individuals to recall things with clarity and truth.

Basically, when a person listens to someone else’s version of something they themselves had witnessed, they absorb details from the new story. The details then worm themselves into the listener’s own recollection. The more other people reinforce these details, the more real they seem.

The phenomenon is everywhere; from small groups discussing a personal experience to nations following a news story. Social events, in particular, are among the most distorted memories humans can hope for. With enough reinforcement, large groups can recall things they have never seen and even details that never happened.[10]