North Korea, officially known as the Democratic People’s Republic of Korea (DPRK), is the most secretive and closed country in the world. Its leader, dictator Kim Jong-un, rules the country with an iron fist. The country is home to an estimated 120,000 political prisoners who live and work in harsh conditions and are subjected to torture. In addition, public executions are used as a tool to create fear. In the past decade, at least seven people have been publicly executed in North Korea for watching K-pop videos from South Korea.

It is no surprise then that, on average, thousands of North Koreans defect each year, although this number has been drastically declining. Less talked about, however, are the shocking times when people decided to defect to North Korea. In this list, we look at ten of the most shocking defections to North Korea.

One of the most high-profile defectors to North Korea was U.S.-born James Dresnok. A U.S. soldier stationed on the Korean peninsula, Dresnok crossed the demilitarized zone (DMZ), after which he was apprehended by North Korean soldiers. He lived in North Korea until his death in 2016. His two sons remain in North Korea, professing their loyalty to the “dear supreme commander” Kim Jong-un in a 2017 interview.

Dresnok defected to the North on August 15, 1962, walking across a minefield. At the time of his defection, Dresnok was divorced and facing a court martial for forging his sergeant’s signature. In the 2006 documentary Crossing the Line, Dresnok admitted, “I was fed up with my childhood, my marriage, my military life, everything.” After defecting to the North, Dresnok became a film star, featuring in several propaganda movies, playing the role of the American bad guy. Dresnok maintained his loyalty to North Korea throughout his life, stating, “I feel at home. I really feel at home… I wouldn’t trade it for nothing.”[1]

U.S. Soldier Defects To North Korea Only To Have A Forced Marriage Save His Life

Another U.S. soldier who shockingly defected to the North in 1965 was Charles Robert Jenkins, who remained in the DPRK until his escape in 2004. An army sergeant, one evening Jenkins crossed the demilitarized zone while drunk. By doing so, he hoped to avoid active combat duty in Vietnam. However, unlike his peer, James Dresnok, Jenkins immediately realized that he had made a terrible mistake. Following his defection, he found himself locked in a room with three other U.S. defectors (including Dresnok) and forced to study North Korean ideology for ten hours a day.

However, it is not just Americans who have defected to North Korea. On rare occasions, South Koreans have also made this perilous journey. One of the most high-profile South Korean defectors was Choe Deok-sin. Former Foreign Minister and Ambassador to West Germany, Choe defected to the North with his wife in 1986. In his early career, he had served as an officer of the Korean Liberation Army and, later, as head of the Korea Military Academy. However, he became increasingly disgruntled with the South Korean military government and immigrated to the U.S. with his wife. Ten years later, he announced that he would defect to the North, where he was welcomed.

Choe was celebrated in the DPRK until his death in 1989. In a bizarre turn of events, in 2019, Choe In-guk (Choe Deok-sin’s son) announced his defection from South Korea to North Korea, despite earlier criticism of his parents’ decision. Choe Deok-sin is believed to be the highest-ranking South Korean defector to the North.[3]

What if you defect but change your mind? Defections to the South are common, but return trips to the North are much more unusual. Nevertheless, at the beginning of 2022, it was reported that a South Korean man had crossed the DMZ into North Korea. It was noted that such incidents are a rare occurrence. Yet, later investigation revealed that the believed-to-be South Korean defector was, in fact, a North Korean man who had defected to the South one year earlier. However, this has yet to be verified.

The man, whose identity has not been revealed, is thought to have experience as a gymnast, accounting for his skill in scaling the border fences. His motives for returning to the North are unknown. Yet, it is often reported that North Korean defectors face many difficulties in the South, including discrimination, bullying, and barriers to employment.[4]

The first U.S. soldier defector to North Korea, Larry Allen Abshier, abandoned his post in early 1962. Like his peers (see #9 and #10), Abshier was in trouble with his superiors. Stationed at the DMZ, Abshier had been found smoking marijuana on several occasions and was facing a court martial or even dismissal. In an effort to avoid such penalties, Abshier decided one day to walk across the heavily mined DMZ and into North Korea.

Two weeks after his arrival, Abshier was celebrated on DPRK propaganda channels and later became a film star, featuring in numerous North Korean movies. Yet, life in the DPRK was far from easy for Abshier, who was described by fellow defector Charles Jenkins as “the most scared” and “the simplest” of the Americans. Abshier was allegedly bullied by fellow defector Dresnok. The regime later “gave” Abshier a Thai wife, who had allegedly been kidnapped from Macau three months earlier. Unlike his fellow defectors, Abshier died at the early age of forty after suffering a heart attack.[5]

One of the most controversial South Korean defectors was Oh Kil-nam. Having completed his Ph.D. in Germany in Marxist Economics, Oh was approached by North Korean agents who offered him an important post as an economist in the North Korean government. Despite his wife’s protests, he accepted, and Oh, his wife, and two daughters traveled to North Korea via East Germany and Moscow. There was no job waiting when they arrived, nor was there the promised medical treatment for his wife’s hepatitis. They were subsequently drilled in North Korean ideology.

Later, Oh was approached for a mission abroad where he would be based at the North Korean embassy in Denmark, tasked with entrapping South Korean students. Instead, when he arrived in Copenhagen, he begged for help. He was detained by Danish authorities for several months before being sent to Germany to try and free his family. Yet, it was already too late. Oh’s family had been arrested and taken to a concentration camp. He last heard from them in 1991 and has no idea whether they are still alive.[6] 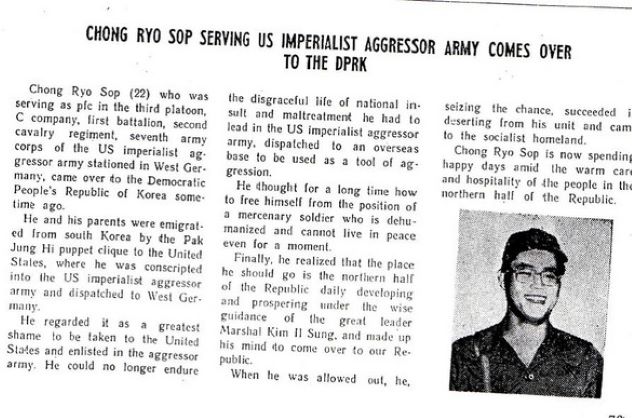 Another defection to the North which made headlines was that of Roy Chung (Chung Ryeu Sop). Chung was a twenty-two-year-old South Korean man who had immigrated to the U.S. with his family in 1973. He joined the U.S. Army and, in 1979, while serving with his unit stationed in West Germany, went absent without leave and was declared a “deserter.” Two months later, he resurfaced in North Korea, apparently unable to endure “the disgraceful life of national insult and maltreatment” of the U.S. Army.

Despite claims of his defection, his parents, who lived in the U.S., were adamant that their son had been abducted by North Korean agents. Meanwhile, U.S. officials said they had no reason to doubt the North Korean version of events and did not investigate the matter, given that Chung had not been privy to any classified information. What happened to Chung following his defection is unknown.[7]

Without a doubt, the most bizarre case of defection to the North is that of Matthew Todd Miller. In April 2014, the twenty-four-year-old American tourist entered North Korea via an arranged tour. However, upon arrival in the country, he proceeded to tear up his visa and ask for political asylum. Miller was arrested and detained for a “gross violation” of North Korea’s legal order.

In September 2014, Miller was sentenced to six years of hard labor for entering the country illegally and committing “hostile” acts. However, he was subsequently released on November 8, 2014, along with fellow American Kenneth Bae, who had been given a fifteen-year sentence for anti-governmental activities. In explaining his actions following his release, Miller said, “I was just trying to stay in the country.” He further explained that his true goal was to learn about North Korea and “speak to an ordinary North Korean about normal things.”[8] 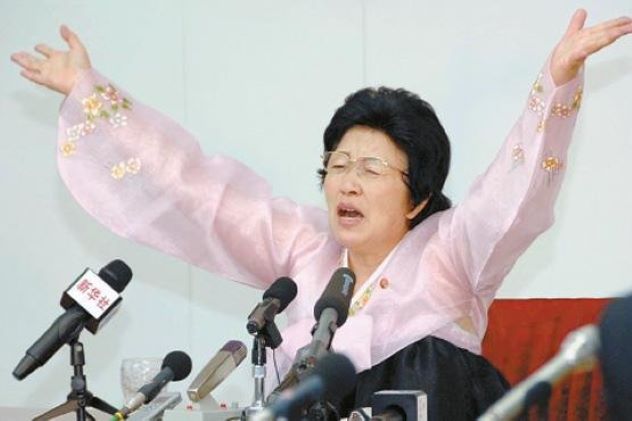 Another case of “double defection” arose in 2012 with the much-celebrated return of sixty-six-year-old Pak Jong-suk to North Korea. Pak defected in 2006 to join her father in the Chinese city of Qingdao. Here, Pak claims she was tricked by South Korean security agents into defecting to the South, where she lived for six years. It is reported that Pak subsequently flew back to the North via China on May 25, 2012.

Upon her return, Pak gave a public press conference. She apologized for “betraying her motherland” and praised the “profound loving care” that the North Korean leader had displayed to her on her homecoming. In the 80-minute conference, she detailed her hardships while living in the “corrupt money-crazed South.” Despite her convincing display of allegiance, many are skeptical. They consider that Pak returned to the North due to her concerns for her family and not a longing for her homeland. They deem her story to be largely false and State fed.[9]

Lastly is Joseph White, another U.S. soldier who defected to the North in 1982. White joined the U.S. Army in October 1981 and was assigned to the 2nd Infantry Division in South Korea in March 1982. On the morning of August 28, 1982, he suddenly abandoned his post in the DMZ and crossed into North Korea at the age of twenty for “motives that are not known.” North Korean officials announced that he had sought political refuge in the country because of “deep emotion.”

In 1983, White’s parents received a letter from their son assuring them that he was well and working as an English teacher. Sadly, two years later, in 1985, White drowned while swimming in the Chongchon River. The river was reportedly rain-swollen, and White became caught in a swirl of fast water. Friends were unable to save him. He died aged just twenty-three.[10]