You can’t deny it. There is something quite chilling about moving into a place that many others have passed through before. Who knows what you might find? If you’re lucky, maybe it’ll be some expensive artwork, secret passages, or strange remnants of past lives. But if luck isn’t on your side… well, stick around to find out.

This list covers ten “what the hell” cases of people who have made very bizarre and sometimes disturbing discoveries within their own four walls.

10 From Russia to New York 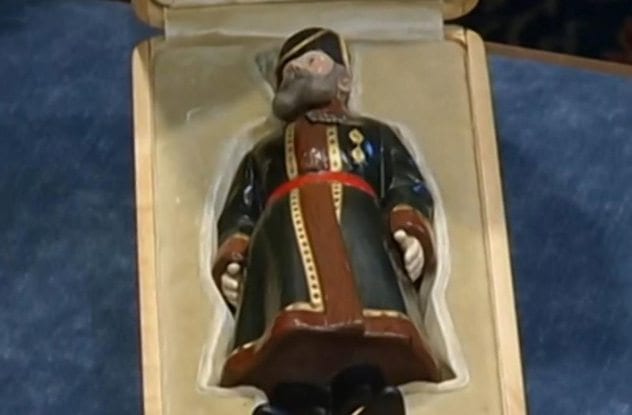 After George Davis passed away, his family sorted through his belongings only to find a mysterious box in the attic. It held a small Fabergé figurine which experts later identified as a gift from none other but the Russian Czar Nicolas II to his wife, Empress Alexandra. The hardstone portrait figure was of Nikolai Nikolaievich Pustynnikov, a loyal personal Cossack bodyguard to the empress. The valuable item had little sapphires in the eyes, a little gold trim and gold braid, and elaborately inlaid and enameled double-headed imperial eagles.

They valued the 100-year-old figure at $800,000 but clearly underestimated the public’s interest. At the auction, a jeweler from London bought it for a whopping $5.2 million!

Many Americans dream of a trip to Europe, but when Mark and Jenny Ronsman moved into their new house, they didn’t know that Italy would be only one floorboard away.

Once they removed the reliable Wisconsin wood in their office, they were amazed to discover a fully intact Roman-style bath. The striking blue mosaic really was the last thing they had expected, but they were more than excited. They spent hours removing the leveling material, whitening the grout, and sanitizing the tub.

Mark Ronsman said online: “I was truly shocked and overjoyed that something so beautiful was in our house!” And we agree. Even Caesar would have been jealous of that discovery. [2]

Oh, how romantic it would be to find decades-old love letters!

When Phil Mathies decided to give his bathroom an upgrade in 2014, he involuntarily became the side character of a real-life rom-com. The contractor he hired ended up finding dozens of love letters that dated back all the way to 1918. The bizarre part? They were hidden inside the attic wall!

The letters told the story of a WWI soldier named Clement and his beloved Mary. When Phil Mathies tracked down Clement’s relatives, they were thrilled to receive the letters. As Phil learned, Clement and Mary did end up together and had their own family. It was true love.

But how the letters ended up in the walls of this Indiana home will forever remain a mystery.[3]

What would you do if you found seven grand inside an abandoned house? Be sneaky and keep it? Not on Dave’s watch!

Dave, an urban photographer, really only wanted to take some pictures of antiques for his blog. But what he found behind an old mattress probably made his heart jump. Stuffed inside a yellow Home Hardware bag was almost $7,000 in cash, tightly rolled up in bundles. The notes were held together by elastic bands, which marked dates from the mid-1960s to the 1970s.

Dave decided to track down the granddaughter of the previous owners to hand back the money. Naturally, she was thrilled and told the photographer that her grandparents likely earned the money with the fruit stand they owned. They must have collected it over decades.[4]

Affordable living space is rare in New York City, so just imagine how Samantha Hartsoe must have felt when she found out that she had access to more rooms than expected.

It all started with cold air coming from behind her mirror. Once she investigated the draft, she found the entrance to an entire vacant unit! On her TikTok, Samantha Hartsoe documented her trip beyond the wall, and several million people joined her, waiting for what was behind the next corner. Why does this apartment not have its own door? And why is it connected to Smanatha’s flat through only a small hole? 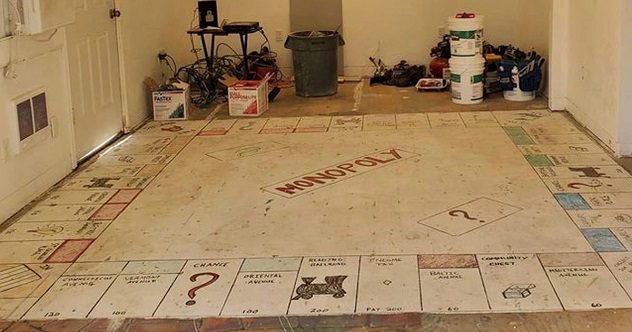 We all enjoy board games, but some people take their love for Chess, Backgammon, and others to a whole other level.

In 2021, a Reddit user shared his in-laws’ discovery when they decided to remove the carpet in their new home. What did they find underneath? Another Roman bath? Hah, no. Somebody had drawn an entire Monopoly board onto the floor!

It had all the streets, a jail, and even a community chest! Weird, right? Actually, no. According to other Reddit users, XXL board games weren’t that unusual back in the day. They were a popular way to decorate playrooms and could be found in many basements.

Well, the next game night at this user’s in-laws’ place will be one to remember.[6]

Okay, bare with us because this case is way more interesting than watching paint dry.

In 1970, a private collector purchased a Van Gogh painting but was left beyond disappointed when the Van Gogh Museum in Amsterdam told him that it was a fake due to the lack of a signature. But years later, with the help of modern technology, that statement was refuted. The collector was holding a real Van Gogh in his hands. It was the first full-size painting to be discovered in 85 years!

In letters to his brother Theo, Vincent Van Gogh wrote about the painting and how he was unsatisfied with the result. According to the artist, Sunset at Montmajour was not what he had hoped to create; therefore, he didn’t sign it.

And this poor artwork had been hidden in a Norwegian attic for over a century because, more than once, people thought it to be a counterfeit. Sorry, Vincent.[7]

Family finds bees in their house, honey dripping from the walls

So far, the people on this list have gotten quite lucky, but not all surprises are pleasant.

When Justin and Andrea Isabell found something dark dripping down the walls, they first thought of water damage as their area had just witnessed a tropical storm. But it wasn’t water. Instead, real honey was running down the walls in their Pennsylvania home.

Yes, you read that right. Honey.

Justin and Andrea Isabell then went on to check their attic, only to find a massive bee colony that housed 20,000 to 30,000 bees! Imagine all that aggressive buzzing. It’s a surprise they never heard anything downstairs. Despite their sons’ wishes, they decided to not keep the bees. First, the swarm fled to a neighbor’s tree before a beekeeper rehomed their colony.

No more free honey for the Isabells.[8]

2 A House within a House 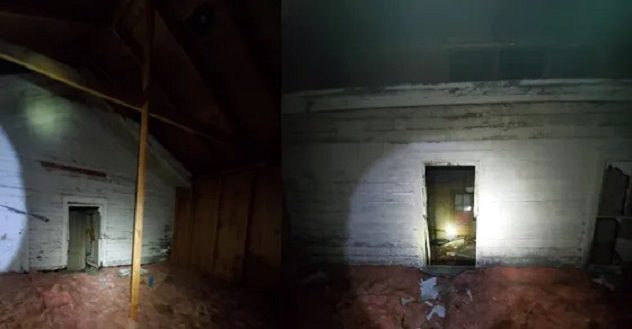 The typical horror movie. You move into an old, abandoned property and climb the stairs up to the attic, only to discover a creepy dollhouse that has been left behind for some reason.

Just that this time, it was not made for dolls. Instead, the owner found a full-sized house. In the attic. Yes, we know how crazy that sounds.

The Redditor shared pictures of his findings that showed intact windows, light fixtures, and a bathroom. There even were some abandoned belongings lying around. Creepy! The Redditor theorizes that the abode used to be part of a two-story building until the owners—for whatever reason—decided to build an attic around the top floor.

Was that really necessary? Attics are already scary enough as is![9]

1 The Tragic Story of a Child

We decided to end this list with a very disturbing and heart-breaking case that ended up inspiring its own horror movie.

Laurie and Jeff Dumas’s new house had more left-behind demons than they had gambled for. In the attic, they stumbled upon a room that was separated from the rest of the building. The deadbolts on the door really tried their best to keep the couple out, and once Laurie and Jeff Dumas made it inside, they found that the floor was entirely made of metal.

As Laurie Dumas started looking for an explanation at the local library, she was told that she owned a disappointments room. This was a room in which parents used to lock their disabled children to keep them out of sight.

The former owner had been a judge who imprisoned his daughter, Ruth so that her disability couldn’t tarnish his reputation.

Laurie and Jeff Dumas shared this horrifying and disturbing discovery on an HGTV episode of If Walls Could Talk. In 2016, Director D. J. Caruso retold the story with his movie The Disappointments Room.[10]