The Giza Pyramids were constructed about 4,500 years ago. As breathtaking as these monuments are, they are not the oldest. Other archaeological sites are far more ancient than the Giza complex. This list looks at the most intriguing candidates known for their uniqueness or historical importance, including the largest human-made landscape and how avocados led to the discovery of a massive, peculiar megalithic complex. 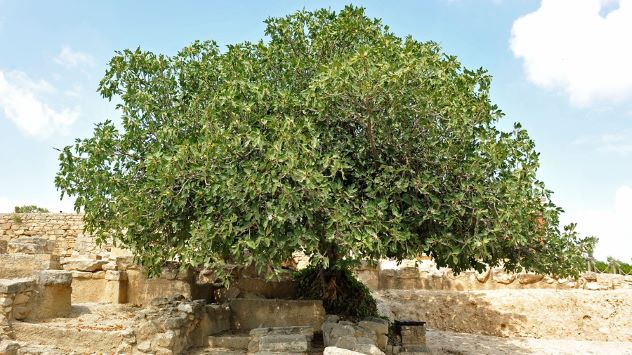 The remains of a prehistoric village still exist in Israel. Located in the Jordan Valley, something sets it apart from other settlements of the same age. That something was charcoal. Sure, it sounds boring, but when archaeologists tested the scorched stuff, they discovered that the wood was 7,000 years old. But there was more.

The wood belonged to olive and fig trees. This was rather surprising. The specimens were the result of fruit tree cultivation, proving that olive and fig horticulture flourished long before the pyramids.

The find provided the earliest example of this type of farming but also showed that the trees didn’t just provide food and firewood for the villagers. It made them rich. Most of the homes had silos that could store massive amounts of crops, more than each family could ever need for their own personal use. This strongly suggested that the village did long-distance trading with dried figs and olive oil.[1]

In 2022, developers wanted to plant avocado trees. They had their eye on a patch of land in Huelva, Spain. Before they could plant anything, however, a permit was required, which called for a land survey. As the surveyors discovered one stone after the other, it became clear that they were walking through a massive megalithic complex.

The La Torre-La Janera site, aged at roughly 7,000 years, contained over 500 standing stones, although many are still believed to be buried. The sheer number guaranteed its place among the biggest complexes in Europe, but one feature set Janera apart. It held the most diverse collection of different megalithic structures found anywhere in the Iberian Peninsula.

Most other sites consist only of dolmens or stone circles. But this complex contained a striking collection of dolmens, circles, mounds, enclosures, the said 500-plus standing stones, and cists (casket-like stone boxes).[2]

7,000-year-old structure near Prague is older than Stonehenge, Egyptian pyramids

The oldest evidence of architecture in Europe is a mysterious group of earthworks called roundels. Hundreds dot the landscape across Central Europe, and as their name suggests, they are round structures. In the Czech Republic, the Vinor Roundel was discovered by construction diggers in the 1980s, but it wasn’t until 2022 that the ruins were fully excavated.

The structure is enigmatic, but researchers believe it might’ve been the handiwork of a Stone Age community that used the roundel as a meeting place 7,000 years ago. This particular building measured 180 feet (55 meters) in diameter and had three entrances. The people probably belonged to the Stroked Pottery culture. They were farmers and accomplished longhouse builders who flourished in the area between 4900 BC and 4400 BC.[3]

In 2017, researchers made a sad discovery. While digging in Italy’s Arma Veirana cave, they uncovered the grave of a baby girl. Despite the tragic circumstances, it piqued their interest. In Europe, such ancient infant graves are extremely rare. The baby, whom they affectionately called “Neve,” stood out for another reason. Her grave was 10,000 years old, making her the oldest female child discovered in Europe.

But Neve had one more surprise for the researchers. Her burial provided an answer to a simple but hexing question, “How did people carry their infants back then?” A fair guess was that people used animal skins or degradable fabrics to make baby slings, which could explain why none have survived to modern times. Neve was the first proof of this.

In 2022, a new study examined the shells surrounding her remains. Their position and her body posture strongly suggested that she’d been buried in a shell-decorated baby sling, probably the same one used by Neve’s parents to carry her around during her short life.[4]

Aboriginal Astronomy – Behind the News

The Wurdi Youang stone arrangement is located west of Melbourne, Australia. This ancient place consists of 90 carefully arranged blocks of basalt, a feature that gives the site a distinct Stonehenge-like flavor. However, the Wurdi Youang stones are much smaller. The tallest ones are no higher than a person’s waist.

Although the true purpose of the arrangement remains unknown, researchers are confident that Aboriginal astronomers used the stones to track the movement of the sun and mark the solstices.

Stonehenge might be taller, but it’s not the oldest. In 2016, geologists and other experts studied the site and concluded that it could be as old as 11,000 years. If true, that will make Wurdi Youang the world’s first observatory.[5]

If you blink, your brain might dismiss the LSU mounds as landscaping features. Especially because the pair can be found on the Louisiana State University campus—not where one would expect to find the earliest human-made structures in the Americas. But sure enough, these grassy, well-manicured peaks go back 11,000 years.

Well, at least one of them does. When researchers recently clambered up the 20-foot (6-meter) slopes, they extracted cores filled with ancient clay, ash, plants, and animal bones. These bits dated the so-called Mound B as the record breaker. Mound A was 7,500 years old.

The builders didn’t scrape the heaps together in one day. Research shows that indigenous people spent thousands of years building them up, constantly adding layers of clay and burning organic material on the mounds. Interestingly, about 6,000 years ago, when both mounds were completed, they also lined up with a bright star called Arcturus.[6]

In Western Australia, there is a collection of rock art unique to the Kimberley region. Done in the Gwion style, the Aboriginal art shows human figures adorned with anklets, bracelets, and headdresses. When it was first discovered, the work was clearly ancient, but putting a date on the gallery wasn’t easy. For a while, experts tentatively tagged it at 17,000 years old.

In 2020, scientists noticed wasp nests in the area. They were old, but any art behind them was bound to be older. On the other hand, any art on top of the muddy constructions would be younger than the nests.

This time bracket gave researchers a way to box in the real date. They tested over 100 nests, and the results put the gallery at 12,000 years. While it’s younger than initially thought, the artwork remains about seven millennia older than the Giza pyramids.[7]

Located in the Rocky Mountains in Wyoming, the Powars II quarry isn’t a new discovery. Archaeologists briefly documented the site in the 1980s but failed to recognize its importance. But in recent years, another team returned and realized that Powars II was 13,000 years old. This made it the oldest red ochre quarry in the Americas.

The excavation uncovered mining tools, bones, weapons, and beads. This cache contained thousands of items that also flagged Powars II as one of the densest Paleoindian records in existence.

Interestingly, the quarry wasn’t a locals-only enterprise. Some of the artifacts also showed that people traveled from great distances away to pull the precious red pigment from the mountain. Experts believe that ochre found at other archaeological sites across the American mid-continent probably came from this quarry.[8]

In 2020, archaeologists found a skeleton in a Borneo limestone cave. The left foot was missing. Normally, an incomplete skeleton is enough to ruin a researcher’s day since critical information can be lost. However, in this case, the team was delighted.

Around 31,000 years ago, the person had their foot skillfully amputated, and they lived for almost a decade afterward. This was bizarre. The surgeons lived before the advent of agriculture and permanent settlements, two factors hailed by historians as the catalyst for complex medical advancements.

It’s already amazing that the skeleton could be the world’s oldest case of medical amputation. But how did these hunter-gatherers have the knowledge to recognize when to remove a limb for health reasons and the skill to provide pain relief during and after major surgery, avoid the veins and nerves, stem major bleeding, and prevent post-operative infection?[9]

Human Origins: How to tell a rock from a stone tool?

In 2011, researchers visited the Sahara desert to have another look at the Messak Settafet escarpment. Measuring 217 miles (350 kilometers) long and running, on average, 37 miles (60 kilometers) wide, the sandstone outcrop is not entirely natural.

The site contains ancient stone artifacts, but that’s not the surprising bit. The quality of the rock would’ve been a magnet for prehistoric toolmakers. What’s noteworthy, however, is the number of abandoned tools at Messak Settafet. The 2011 team discovered an average of 75 million artifacts per 0.38 square mile (1 square kilometer).

This carpet of tools is the result of hundreds of thousands of years of humans and earlier hominids carving pieces from the escarpment for weapons and tools, abandoning some along the way, and also making Messak Settafet the oldest human-made landscape on Earth.[10]