Even though only around 5% of the oceans on Earth have been explored, famous beaches, gorgeous islands, and the sea itself remain spectacular places to recharge, rejuvenate, and simply gaze at the beauty surrounding you. Photographers often make it their mission to capture the dazzling splendor of the world’s oceans, including the amazing creatures that inhabit the waters. And sometimes, the result of their efforts is something almost beyond belief.

Related: Top 10 Crazy Things Nature Does On A Massive Scale 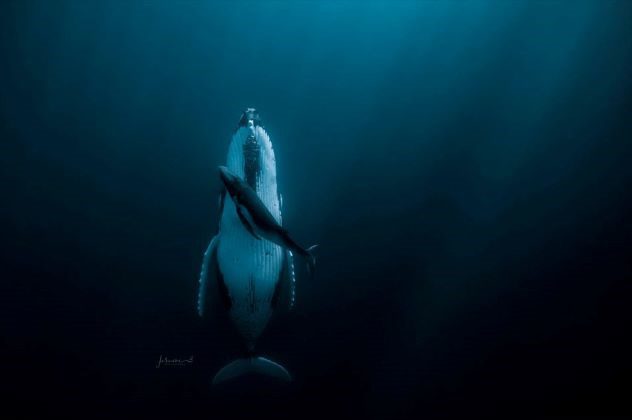 Every year on the third Sunday in February, countries around the globe celebrate World Whale Day. Whales are a huge attraction and naturally make for stunning photographs. Australian photographer, Jasmine Carey, was snorkeling in Tonga in 2019 when she spotted a humpback whale calf sidling up to its mother. She snapped a magnificent photo that won her the top prize in the 2020 HIPA photography contest.

In the image, the mother humpback whale is sleeping in an upright position under the water, with her calf in front of her, nuzzling her and gazing upward toward the surface. The calf was named Little Zai and was around two weeks old when the photo was taken.[1]

9 Clouds in the Ocean 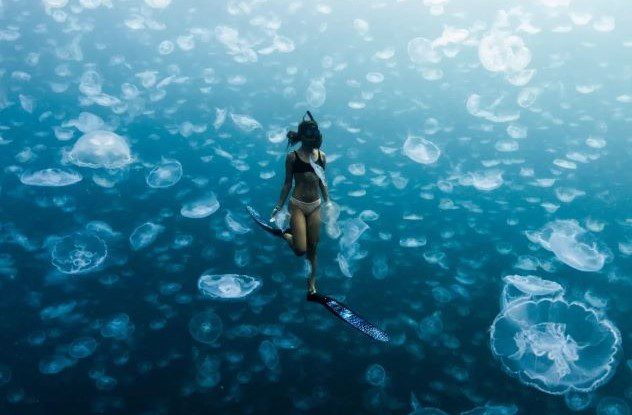 Also in 2019, freedivers took to the ocean off the Raja Ampat islands in Indonesia to swim amid thousands of moon jellyfish. Australian photographer Alex Kydd had a blast taking photographs on the diving trip and said afterward that seeing so many jellyfish in one place “was an incredible spectacle.”

The photos of the divers in the middle of the swarming jellyfish almost make it seem like they are floating through clouds in the ocean and not through transparent creatures who could have stung them at any moment.[2]

8 Drama at the Lighthouse 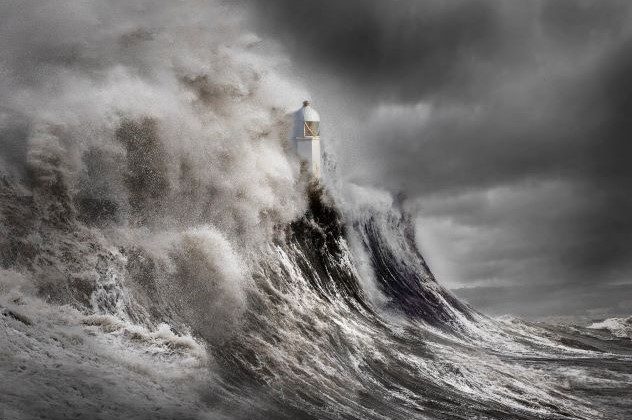 Is there anything more terrifying but mesmerizing than a violent storm at sea? Seemingly in the blink of an eye, the calm surface is swept up in a frenzy of angry waves that lash anything in their path. Add a grim, overcast sky and a lonely lighthouse to that image, and you have a winning, albeit eerie, photograph.

Aleks Gjika won top honors in the Your View category of the 13th Landscape of the Year Photography contest in 2020 with his photograph of a storm at sea engulfing the Porthcawl Lighthouse in the UK.[3] 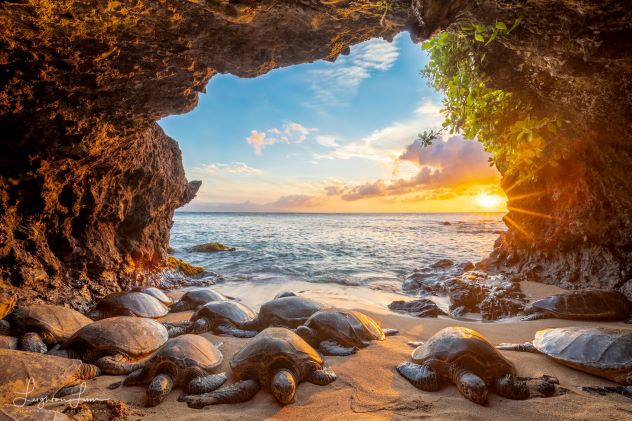 You know how they say that photos can’t do vacation destinations justice? Well, in the 2021 Hawaii Magazine photography contest, photographers did their best to do just that. The entries portrayed exactly why Hawaii is a beloved holiday destination by showcasing the best of what the islands have to offer.

Photographer, Leighton Lum snapped a breathtaking image of a sunset over Honu Cove. The photo captures the last of the sun’s rays peeking into a hidden cave and spilling over sea turtles who had ventured inside.[4] 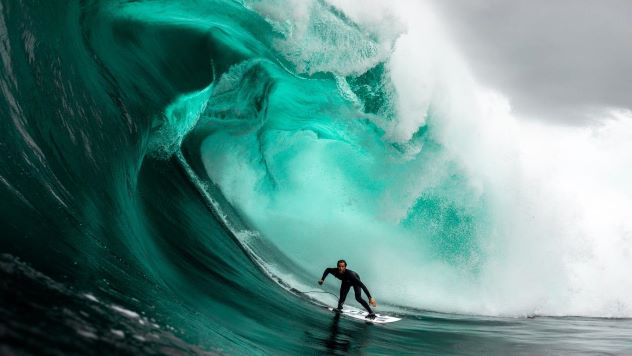 The remote Shipstern Bluff, located on the southeastern coast of Tasmania, is known for being one of the most dangerous surfing spots in the world because of the gigantic waves that form miles out at sea before hitting the sharp reef where it reaches heights of 30 feet (10 meters). This movement causes the waves to “fold over,” causing a barrelling wave large enough to fit a bus inside. However, the size of these waves is not enough to scare off daredevil surfers.

For the 2020 Ocean Photography / Adventure Photographer of the Year contest, photographer Lance Morgan snapped one of these surfers in action—a massive glowing wave hovering above the man as he expertly maneuvers his surfboard. The photo earned Morgan a nomination for the contest alongside several other photographers who captured the beauty of the different seas (and waves) around the world.[5] 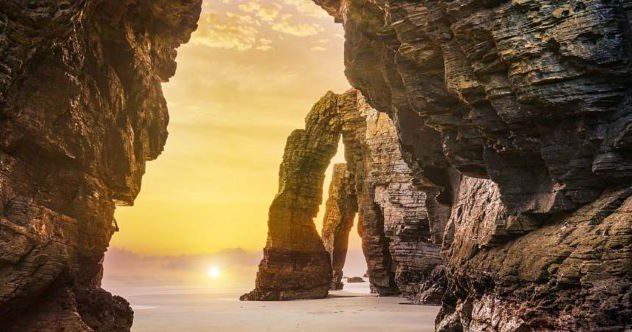 This second half of this list is not about contest-winning photographs but includes equally stunning photos depicting the wonder of the ocean and its natural surroundings. One of the most visited locations in Spain is the Playa de Las Catedrales, or Beach of the Cathedral, which lies near the Eo River.

Erosion has carved out caves and rock arches that resemble the elements of a cathedral, and during high tide, whistling sounds and murmurs echo from the rocks. It is important to note, however, that the Beach of the Cathedral can only be visited during low tide.[6] 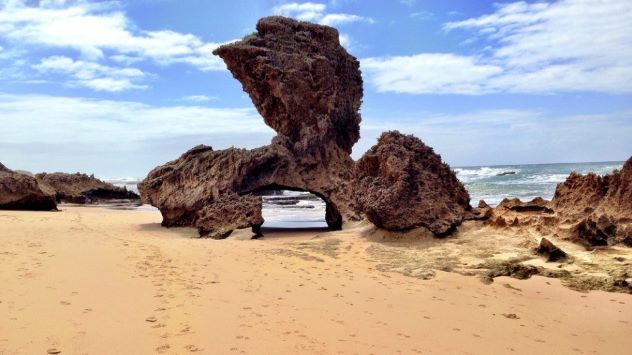 In Kenton-on-Sea, a seaside town in the Eastern Cape province of South Africa, you will find rocks that resemble ships and shipwrecks, as well as the infamous Carriage Rock, which lies between Middle Beach and Bushman’s River Mouth. The rock, as you may have guessed, closely resembles the shape of a wagon or carriage and makes for a dramatic backdrop for any photograph.

Much like the Beach of the Cathedral from above, Carriage Rock was also carved by waves and ongoing erosion.[7] 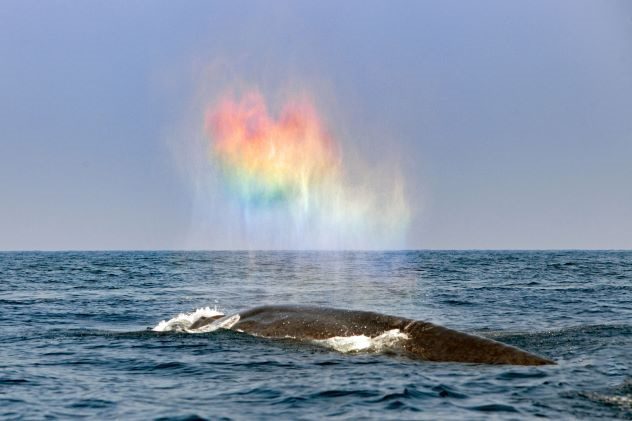 The blue whale is the largest and loudest animal on Earth. Scientists say that the noise a blue whale emits is louder than a jet engine, and their low-frequency whistle can be heard for hundreds of miles. Blue whales can weigh around 200 tons and have hearts the size of a VW Beetle. These magnificent whales are also believed to be larger than what both dinosaurs and megalodons would have been.

Blue whale sightings are exceptionally rare, which is why wildlife photographer Tanakit Suwanyangyaun was incredibly lucky to capture the photo he did in 2020. Tanakit was on a diving tour near Sri Lanka and was doing some exploring when he spotted more than one blue whale. Gripping his camera, he managed to snap a picture just as one of the whales breached the surface to clear its blowhole. As the water sprayed into the air, the droplets caught the light and created a rainbow heart over the whale.[8] 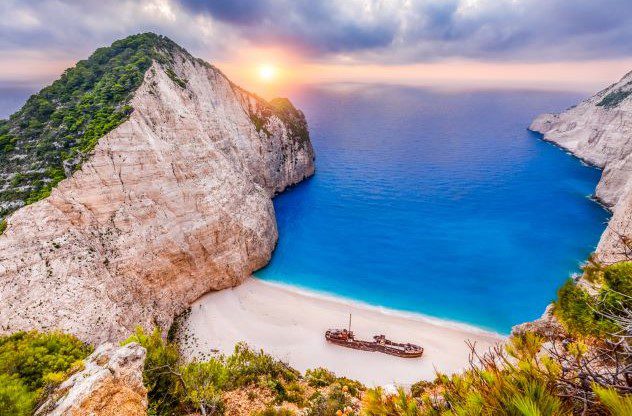 This place looks like something from a dream. The sand on the small beach is impossibly white, the water a stunning shade of blue, and the view absolutely spectacular. Shipwreck Beach is situated off the southwest coast of Greece on the island of Zakynthos. Shipwreck Beach (real name Navagio Beach) is one of the most famous places in the world, and not only because of its surreal beauty. On the sand lies the wreck of the MV Panagiotis that ran aground in 1980.

Rumors still abound that the ship was smuggling alcohol, cigarettes, and even humans and was forced to run aground after being spotted by authorities.[9] 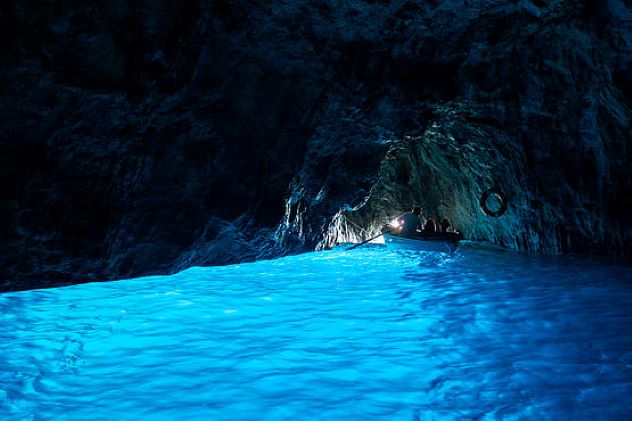 On the Italian island of Capri, you will find the Blue Grotto, which is a wondrous sea cave that was once the private natural pool of the Roman Emperor Tiberius. Many people who have visited the cave have reported feeling like they’re floating in the air while swimming through the water. The cave is only accessible by small rowboats in which visitors must lie flat for their boat to enter the cave mouth, which is only a few feet (a meter) high.

Once inside, you will see amazingly clear waters that glow so brightly in a turquoise hue that it illuminates the entire cave. Refraction of the sunlight is what gives the water its intense coloring. For many years after the reign of Tiberius, sailors avoided Blue Grotto like the plague. This was because of local legends that told tales of evil spirits and demons inhabiting the place.[10] 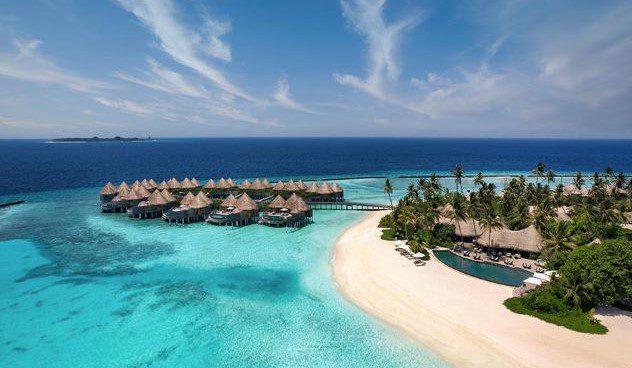 In the Indian Ocean lie the Maldives atolls. Here, every resort is basically converted into a private island for the enjoyment of visitors who can sit and gaze at the seemingly never-ending clear waters surrounding them. The azure sea teems with ocean life and makes for amazing photographs. In certain parts of the islands, tourists are offered the opportunity to snorkel alongside giant manta rays and whale sharks. The colorful reefs beneath the surface of the sea consist of more than 200 different species of coral. The turquoise color of the shallow water surrounding the blinding white sand islands makes the Maldives instantly recognizable.

This photograph perfectly captures that “island feeling” as it highlights the contrasting waters that somehow make the blue sky above it seem dull.[11] 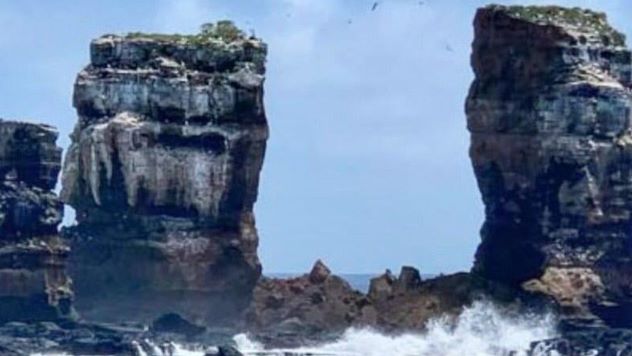 In 2021, the top part of the famous Darwin’s Arch off the Galapagos Islands collapsed into the sea. The collapse was blamed on continued erosion. What remains of the natural bridge now is the two imposing columns facing one another, which in itself remains a fantastic sight to behold.

The waters around Darwin’s Arch are a premier diving spot and are inhabited by dolphins, turtles, sharks, and manta rays. The arch lies less than a mile (under one kilometer) from the mainland of Darwin island.[12]