Every boy at some point in his childhood dreams of being a cop – chasing the baddies and bringing justice to the world. The desire to help others in such a manly way has led to a plethora of films and TV programs that feature the awesomest of awesome cops. This list looks at the ten best. As usual, be sure to tell us your favorites in the comments. 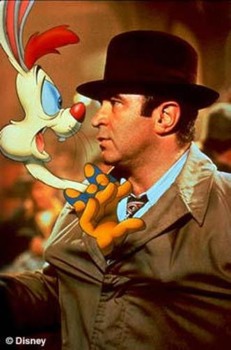 Valiant, played by Bob Hoskins, is a toon hating policeman charged with the investigation of a murder wrapped around a love triangle. This is a cartoon that is more geared for adults but still appropriate for children. Valiant plays the standard hard drinking, cursing, fighting cop of the mid. 20th century. Acting with co-stars that aren’t real certainly poses a challenge but Hoskins manages to turn in a good performance in spite of this difficulty. 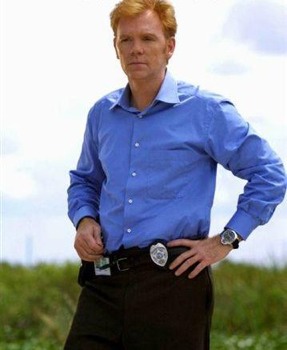 David Caruso plays the all-seeing, all-knowing cop in C.S.I.’s Miami rendition of the series that made police scientists cool. Caine is one of the more cheesy characters ever to hit the screen, movie or television. He can be expected to utter the most obvious, self-serving line to fit the situation. He is at his best/worst when dealing with children as he lays his bravado on thicker than usual. What would a cop list be without the best police officer ever to live in the entire world? Horatio Caine, an unintentionally hilarious character. 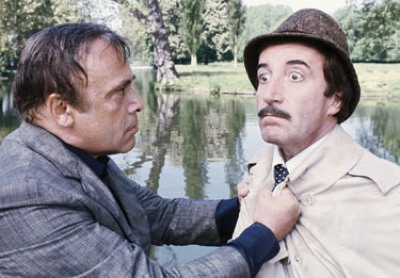 Peter Sellers does a masterful job of playing Inspector Clouseau in the 1963 edition of The Pink Panther. Sellers is one of the most dynamic actors ever, anyone who has seen Dr. Strangelove knows the dexterity of his skills as he plays 3 characters with entirely different mannerisms, even accents. Peter Sellers is one of my favorite actors to grace the silver screen. 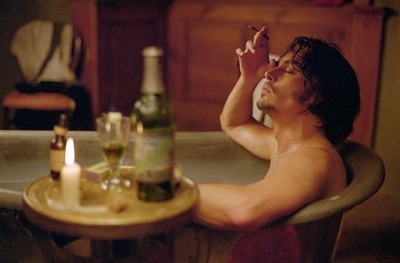 The protagonist in the movie “From Hell” is played by Johnny Depp in this who-dun-it surrounding the Jack the Ripper killings of the mid. 19th century. Abberline is an opium addicted, yet extremely clever cop who remains a step behind Jack for the balance of the film, only to come to a surprising conclusion as to the identity of Jack the Ripper. 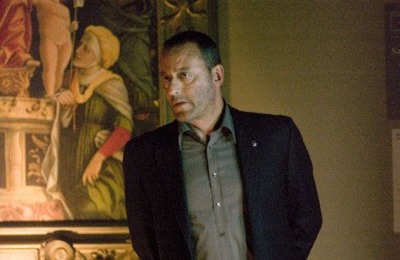 The Da Vinci Code is a controversial book that spawned a movie based on the quest for the holy grail. Captain Bezu Fache, played by Jean Reno, plays a Parisian police officer who is a loyal member of the Roman Catholic order, Opus Dei. Fache’s motives become clear throughout the film as he acts not in the interest of the law but at the direction of a powerful bishop. But, like all good cops, Fache proves an able study as he unearths the truth behind this conflict of church vs. intellectuals. Despite the fact that the film is crap, like the book upon which it is based, the acting from Reno was definitely good enough for inclusion here. 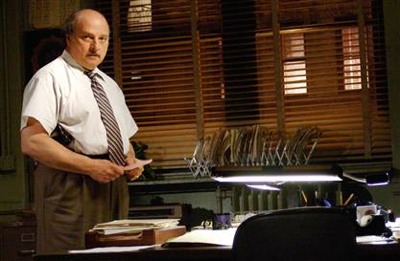 Sipowicz was the main character of the television series NYPD Blue which was played by Dennis Franz. Sipowicz is the stereotypical New York police officer, outspoken and not afraid to use physical force to convince suspects and witnesses to cooperate. This was an incredibly successful series spanning 12 years, Sipowicz was one of the main forces behind it’s success. 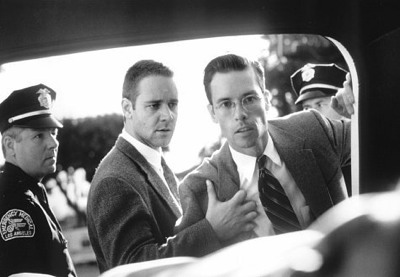 LA Confidential is a story of mid 19th century Los Angeles, White is a cop who develops quite an affinity for prostitute Lynn Bracken, played by Kim Basinger. White and his nemesis Ed Exley, an uber ambitious policeman with a sterling law force lineage, team up to solve the murders known as the “Night Owl Killings”. Along the way they uncover a prostitution ring where women are “cut” to look like movie stars and expose an internal affairs scandal that would threaten to tear down the structure of the L.A.P.D. Bud White has immense physical strength and an uncanny ability to sense and intervene in the abuse of women. He is a fanatic protecter of the fairer sex. Bud White is played by Russell Crowe. 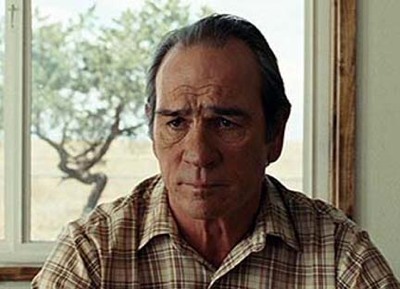 Played by Tommy Lee Jones, Bell is a small town Texas sheriff caught up in a feud between Mexican drug lords, their American accomplices, a contract killer, and a small town boy named Llewelyn Moss who stumbled on a heroin deal gone wrong, making off with over 2 million dollars. Bell is the moral cop who tries, albeit unsuccessfully, to bring in Moss and protect him from the wrath of the Mexican cartels and the contract killer hired by the American importers. This is one of the Coen brother’s less than humorous films, adapted from the book of the same title written by Cormac McCarthy. The film is, of course, No Country For Old Men. 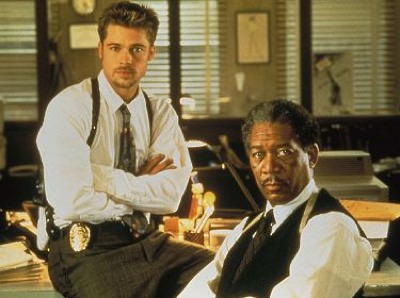 Morgan Freeman plays this cerebral cop who teams up with a young, less cerebral David Mills, played by Brad Pitt. Somerset is in the last stages of his career and has been largely marginalized by the rest of the New York police force. “Seven” is the story of a religiously fanatic serial killer who seeks to find an example of each of the seven deadly sins and murder the sinner in a symbolic way. Somerset and Mills are the detectives who nearly capture the killer, but fail, as he is able to finish his murderous spree. This movie is classified as a horror film but is just as appropriately called a suspense thriller. Kevin Spacey does a very good job playing the killer intoxicated by the Holy Ghost. 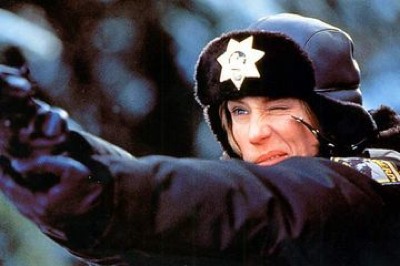 In the brilliant film Fargo, Jerry hires two men to kidnap his wife so he can get his rich father in law to pay the ransom of $1 million. Once the ransom is paid the kidnappers will get $40,000 and Jerry gets the rest. That’s the plan, but what happens is something totally different. Blood is shed when a cop and two innocent people are killed. Marge Gunderson is the Chief who investigates the murders. While Marge investigates, Jerry gets involved in deeper problems, ranging from financial troubles, to threats from the kidnappers. Marge Gunderson is played by the indomitable Frances McDormand who is brilliant in every role she plays. She brings a wry wit, down-to-earth character, and humor to the character and creates the role of a cop that you can’t help but love.

Notable Omissions: Dignam from The Departed (played by Mark Wahlberg)