There have been a few lists already in this particular category, so I thought I would make mine a little different from the others. All the movies on this list are readily available for hire from my local DVD store, unlike a few in the other lists which have been banned in various countries. Some of these movies are disturbing due to their explicit violence, whereas, for others, it’s the subject matter of the film itself.

Based in a time when Japan’s unemployment rate is at a record high, the government devises a plan to take action in the form of killing off rebellious high-school students in hopes the survivors will be appreciative of their lives and contribute to society. Every year a class is chosen at random and, whilst in the comfort of their school bus, the students are drugged and kidnapped, only to awake in their worst nightmare on an island in the middle of nowhere. Each is given a weapon and fitted with an electronic collar, which will explode in three days unless all but one person is dead. This “winner” will then be allowed to return to society and carry on a “normal” life. Lucky them.

Beautifully written, directed and acted, “Hard Candy” seems so realistic it can be difficult to watch at times. When 30-something Geoff meets 14 year-old Haley online in a chat room, he can’t believe his luck. She appears to be putty in his hands and when she agrees to meet in person and go back to his house, he thinks he can’t go wrong. Haley is not like the other girls; she is sweet, smart, sexy. So smart in fact, that when they arrive at Geoff’s house she refuses to let him mix her drink. If only Geoff was so smart. He wakes up tied to a chair, trapped in his own house with a sociopath who is convinced he is a pedophile who murdered a young girl in the area. The psychological and physical traumas she inflicts on Geoff are disturbing, to say the least, especially when you, as an audience, are unsure whether or not he deserves it.

A movie that should be watched by all. Highly disturbing content, but all based on real events in the hideous world of trafficking. The film follows the lives of three trafficked individuals:

Helena is a single mum living in Prague who meets a handsome young man who invites her for a holiday in Vienna, where he lives. When they approach his majestic mansion, Helena can’t believe her luck! They enter the house and ascend up the massive stone staircase to a giant room where about twenty girls are lying on mattresses, drugged and distressed.

Ukrainian teenager Nadia secretly wins a modeling competition in hopes to earn some money to support her father, who is struggling with money since her mother died. The modeling company supply her with a passport and transport to the US where she is taken directly to a brothel.

In Manilla, 12 year-old Annie is abducted from a market place, just meters from her browsing parents. She is then locked in a cellar with another young girl, who was sold to the traffickers by her very poor family.

The movie captures the girls’ struggles as they are raped, drugged and beaten into submission, whilst a US policewoman heads a task force in the hopes of saving them.

And this is where the list begins to get into the shock/horror/gore section of disturbing. “Hostel II” is probably one of the more well-known movies on this list, but still deserves a place. From accidentally wedging a circular saw into a girl’s scalp, to surgically removing the skin from a man’s legs without anaesthetic, to chopping a man’s penis off with a pair of shears: this movie has it all. Eli Roth claims he was inspired by a Thai website advertising a ‘murder holiday’, where a person can pay to kill another person; whom has been sold by their very poor family. Considering how poor some people are in the world, this doesn’t surprise me at all.

Kenneth Bianchi and his cousin Angelo Buono teamed together in Los Angeles, in 1977, to begin ruthlessly raping, torturing and murdering 10 women. They became commonly known as “The Hillside Strangler” as police originally believed it was all one person’s doing.

The two started out by keeping two girls captive in their home; acting as pimps by forcing them to have to sex with “clients” who visited the house. When the girls escaped, the men’s crimes began to escalate before they killed their first victim: a prostitute named Yolanda Washington. Together they murdered 10 women aged 12-28.

When the two separated, Bianchi went on to kill another two women and was also a suspect in the, still unsolved, Alphabet murder case where three people were killed in his hometown of Rochester.

Because these movies serve as prequel and sequel to one another, I have included them both as position five in my list. There’s not a lot to say about these movies except that if you like gore, you can’t go wrong. The movies are based around the “Firefly” family; of which each member is just as certifiable as the next. They prey on innocent people, torturing them with all kinds of gruesomely original practices which have stemmed from the fathomless mind of the writer/director Rob Zombie. Basically if you like people being skinned, scalped, slit, shot, stabbed or sliced, these movies are for you.

“The hills have eyes” is one movie that can never be ‘un-watched’. Once you see it, some of the imagery will never leave you. Set in a hilly desert region in America, a family consisting of a mother and father, their two daughters, son, son-in-law, infant grand-daughter and two German shepherds, become stranded when their camper breaks down. It just so happens that where they are situated was once a small town used for nuclear testing, resulting in the towns people becoming horribly mutated and hungry for blood. This movie has no shame, resulting in some of the most distressing scenes a film could portray. Members of the family are burned alive, raped and shot and what makes it even more awful is the presence of the infant and wondering what is going to happen to her. Definitely a must-see for the deranged!

Presented in reverse, with the last scene as it’s first, “Irreversible” can be a little confusing and it’s probably best to watch it a couple of times so you fully understand what is happening. Therein lies a problem: getting through this movie once is an epic challenge. At least two scenes in this movie are so graphic and realistic, I’m pretty sure even Rob Zombie would leave the room.

A young and beautiful girl named Alex has an argument with her boyfriend at a party and decides to walk alone under a subway to get home. There she meets a sadistic rapist who sodomizes and beats her to a pulp. (There is another notable scene involving a head and a fire extinguisher for those who enjoy feeling ill.) She is near death, in a stretcher with paramedics, when her boyfriend encounters her and seeks revenge; rampaging around the city in a state of hysteria.

Although this movie is intensely violent and crude at times, it is well made and a lot of thought has gone into it. Irreversible won “bronze horse” at the Stockholm Film Festival and competed for the Palm d’Or at the 2002 Cannes Film Festival as well as the “Best Foreign Language Award” by the Film Critics Circle of Australia. It was also voted “Best Foreign Language Film” by the San Diego Film Critics Society.

Something a little extra:

1. Many scenes, including the 9 minute rape scene, were shot with multiple takes that were then invisibly edited together using digital processing.
2. Some of the film is recorded using extremely low-frequency sound (3 Hz from memory) to create a state of disorientation, unease and even nausea within the audience.

This movie is absolutely shocking from beginning to end. And when I say beginning: I was literally screaming for the T.V. to be turned off in the opening credits. The movie opens with footage of dogs that have been skinned alive and are still writhing in agony (which I eagerly fast-forwarded through).

Seed takes pleasure, as most psycho-murderers do, in watching things die. But with a difference: he doesn’t lay a finger on them. He puts a living being in a room with a video camera and watches them over a period of weeks as they deteriorate, starve, die and decompose. He begins with a cockroach, then a dog, then a baby and finally a woman. The police find him and sentence him to the electric chair, where he is electrocuted. However, he survives and, after being buried alive, is furious and goes on a killing rampage. For those who like the sound of the fire extinguisher scene in “Irreversible”; there is a similar hammer scene in this film, which may take your fancy.

1. “Seed” won Best Special Effects at the 2007 New York City Horror Film Festival, which is pretty good considering it apparently took under a month to film and was funded with Boll’s own money.
2. The opening “skinned dogs” scene is real footage, provided by PETA: whom Boll donated 2.5% of the films profits to (however with acting this bad, I doubt that was a significant sum).

When two American girls get a flat tyre and have to traipse through the bushlands of the Netherlands at night, they are relieved to come across a house in the middle of nowhere. Although the occupant, Dr Heiter, is not particularly hospitable, they have little choice but to wait in his house until help arrives. Sadly, help does not arrive, and, instead, they end up waking tied to hospital beds in a make-shift surgery in the Doctor’s basement. Not long after their arrival, Dr Heiter locates himself a Japanese tourist to occupy a third bed. The Doctor then sets up his over-head projector and very casually explains that he is going to use the three to complete his life-long dream of creating a human centipede. Firstly, he will cut the tendons in their knees so they can’t walk, only crawl, and then he will graft skin from the backside of one individual to the mouth of another to create one complete gastric system: 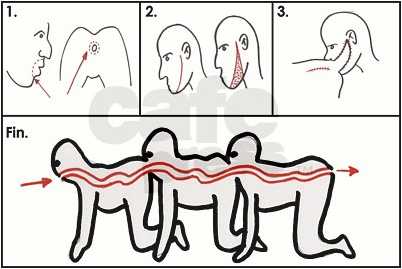 Although Tom Six claims to have worked with a Dutch surgeon in the production to ensure the film was 100% medically sound, it fails to explain how the middle and end position of the centipede can survive on a diet of feces without dying of sepsis. Although the film is full of holes (pardon the pun), you have to admire Six for his originality.

1. When attempting to get funding before the film’s production, Six simply told investors the film was about conjoining people. It wasn’t until the film’s release that the investors saw how they were joined.
2. Dieter Laser, who plays Dr Heiter, stayed in character throughout the making of the film. He separated himself from cast and crew between shots to preserve an awkwardness between himself and the other characters.