Niagara Falls is a site to behold. Consisting of the American Falls, the Bridal Veil Falls & the Canadian Falls, the majesty and the power is overwhelming. Niagara Falls has the highest flow rate of any waterfall in the world and the water that falls over the vertical drop of 165 feet plunges onto jagged rocks below. Awe inspiring, Niagara Falls has drawn tourists for centuries. Starting in the 1820s, as tourism picked up at Niagara Falls, a new breed of individual would begin to arrive at Niagara along with the site-seers, artists, environmentalists and honeymooners: the daredevil.

Several people hoped for instant fame performing daredevil stunts while at the Falls. In 1829, Sam Patch would dive into the Niagara River first at 85ft above the water and later that year at a height of 130ft. The Great Farini, Maria Spelterini and Jean Francois Gravelot, aka “The Great Blondin” would cross the Niagara River Gorge on a tightrope in the 50s, 60s and 70s. Frank M. Brown would swim across the Niagara River and Walter Campbell and his dog Jumbo would navigate the category 6 whirlpool rapids in the 80s. Also in the 1880s, Carlisle Graham, a barrel maker, successfully navigated the rapids and started the famous connection between Niagara Falls and barrels. They all wouldn’t survive. Niagara would claim almost as many lives as it did create overnight sensations. Even the survivors didn’t all become famous or wealthy. In fact, it is now a crime to “stunting without a license” and the fine is currently $10,000. This hasn’t prevented people from trying, however. The Niagara Falls daredevils were the original thrill-seekers and adrenaline junkies.

While the first person wouldn’t go over the Horseshoe Falls (the American Falls are too rocky for anyone to survive) until 1901, it wouldn’t the first stunt to involve a trip over edge. In 1827, a boat full of animals were the first to go over the Falls and of the dozen animals aboard (some tied and caged to the boat) only a goose survived the fall. And not every survivor was a daredevil. Seven-year-old Roger Woodward survived a boating accident and was rescued by a Maid of the Mist boat. Two men survived going over the Falls in 2009 and 2012. This list focuses on the daredevils; those who deliberately went over the Falls with hopes of conquering the mighty Niagara. Perhaps it was lure of the ultimate challenge; surviving a trip over the Falls. There was no greater challenge; the ultimate man versus nature spectacular. Here is a rare list, a handful of people who attempted to conquer Niagara; some who succeed and others who died trying.

10
Annie Edson Taylor
First Person to go over the Falls 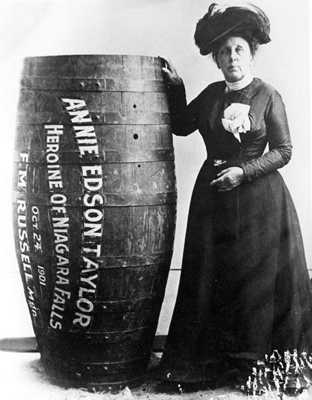 63-year-old Annie Taylor went over Niagara Falls in a pickle barrel on her birthday, October 24, 1901. All that separated Edson Taylor from the roar of Niagara was the barrel, compressed air from a bicycle pump and her lucky pillow. After the screwed the barrel shut, with only a cork separating her from the river-water, Edson Taylor traveled towards the American shore (south of Goat Island). After 17 minutes, Annie was pulled from the barrel with little more than a cut on her head. The “Heroine of Niagara Falls” told the press, “If it was with my dying breath, I would caution anyone against attempting the feat…”, and found little monetary gain from her feat. She died penniless in 1921.

9
Bobby Leach
First Man to go over the Falls As the first male to go over the Falls in a barrel, the English Bobby Leach was a seasoned Barnum and Bailey Circus performer. He wanted to achieve the triple threat: going through the whirlpool in a barrel, parachuting from the Suspension Bridge and going over the Falls in a barrel. On July 25th, in a eight foot steel drum, Leach went over Horseshoe Falls. It took 22 minutes to recover Leach and unlike Annie Edson Taylor, he had suffered two broken knee caps and a fractured jaw. Later in his life, Leach had attempted to swim through the whirlpool rapids, only to be rescued by noted Niagara river-man, William “Red” Hill, Sr. He would loose his life, not to the Niagara, but rather gangrene which developed after a slip on an orange peel.

8
Charles Stephens
Third to go over /First to die 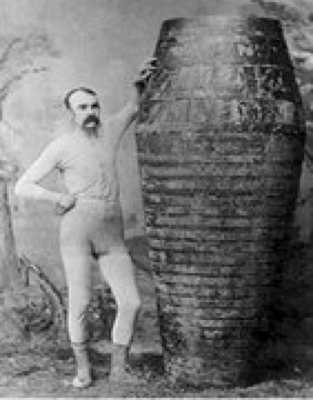 In the same year Leach was rescued by Red Hill, Sr., Charles Stephens would attempt a trip over the Falls. “The Demon Barber of Bristol” was a well-known daredevil in England and refused to test his oak barrel, even after Leach and Hill both recommended it. On July 11th, Stephens left from Snyder’s point. His arms strapped to walls and his feet tied to an anvil, Charles was ripped from the barrel when the anvil tore through the base. All that was recovered from the barrel was his tattooed right arm that read “Forget Me Not Annie”. Charles Stephens was the first daredevil to die while attempting to go over the Falls.

7
George A. Stathakis
Second to die from the plunge 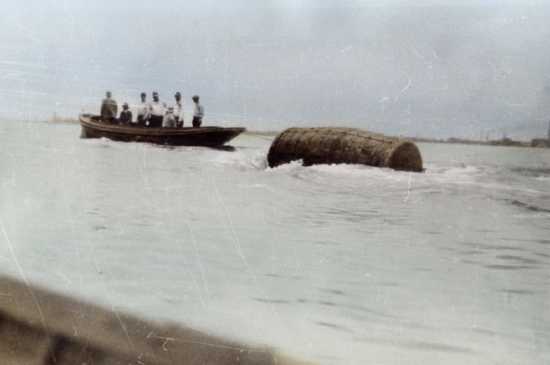 Born in Greece, George Strathakis was hoping the fame of a trip over the Falls would help him publish his writings on metaphysical experiences and religious mysticism. George built a strong 2,000-pound barrel made of steel and wood. On July 5th 1930, Stathakis and his barrel would survive the initial plunge. Unfortunately, for the first time in Niagara Falls history, the barrel Stathakis was trapped inside rolled behind the Falls. Unable to reach him for 22 hours, George Stathakis suffocated with only 8 hours of oxygen in his vessel. His 150 year old pet turtle, Sonny Boy, would survive the ordeal.

As the eldest son of famed Niagara river-man William “Red” Hill Sr., Hill was a successful Niagara legend in his own right. Hill had aided his father as many as 100 recovered bodies from the river and the Falls. The power of the Falls could not have escaped Red Hill Jr. He had made several trips across the rapids, as his father did, yet he was unable to achieve fame and fortune from it. It was 21 years since the death of George Stathakis and no one had attempted to go over the Falls. With limited funds, Hill constructed “The Thing”, a series of heavy inner tubes. Launched from Ushers Creek, on the Canadian shore, Hill went over the Horseshoe Falls at 3:30 on August 5th 1951. With his widowed mother, wife and daughter watching, “The Thing” resurfaced in pieces without Red Hill Jr. His lifeless and badly beaten body was discovered the next day. The death of Red Hill Jr. would prompt legislation making it illegal to stunt in the Niagara Parks. Nathan Boya would take his journey over the Falls a decade after Red Hill Jr.’s fateful plunge. In a sphere covered in layers of steel and rubber, Boya made certain to have enough oxygen to survive for 30 hours. His “Plunge-O-Sphere” launched July 15th, 1961 and the current almost took him over the American Falls. Boya is said to have felt the trip over the Falls until his vessel hit the rocks at the bottom. He was fined $100 for his illegal stunt. Boya was the first black man to go over the Falls as well as the first uninterested in wealth and fame. He would later earn a doctorate in sociology and a post-doctorate degree in medical behavior.

Born in Czechoslovakia and living in Canada, Karel Soucek would perform his stunt 23 years after the last daredevil had successful taken the plunge. Soucek called himself the “Last of the Niagara Daredevils” and had spent a year planning and advertising his trip. On July 2nd 1984 Karel’s assistants launched his red barrel into the river from the Canadian shore. His lightweight metal and plastic vessel was specially designed so he would travel feet first. He surfaced 45 minutes into his journey and received only minor injuries.Soucek was fined $500 for his activity and his barrel was confiscated. After surviving the Falls, Soucek would sadly die the following year repeating his plunge at the Houston Astrodome into a tank of water 10 feet.

3
John (Dave) Munday
First to go over the Falls twice 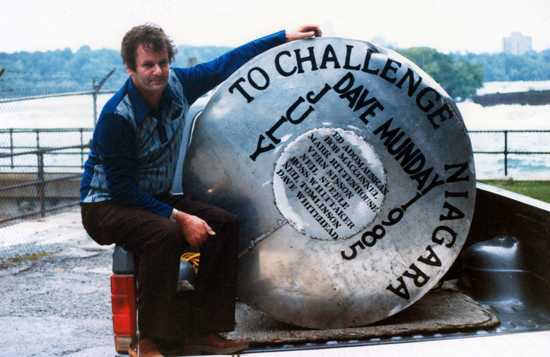 Dave Munday holds the distinction of being the person to go over the Falls twice. As s skydiving instructor, helicopter and aircraft pilot, Munday is a thrill seeker. In a silver and red aluminum barrel, Munday became the ninth person to go over the Falls on October 5th 1985. He video taped the trip and was fined $1,500 for his actions. Munday’s second journey was August 26th 1993 in a retrofitted diving bell. Munday was knocked unconscious by this plunge and was rescued by a Maid of the Mist boat. Jeffrey Petkovich and Peter DeBernardi were the first pair to go over the Falls together. Their yellow steel and plexiglass barrel was launched September 28 1989. Quite the pair, their vessel had the slogan, “Don’t Put Yourself On The Edge – Drugs Kill” and Petkovich wore a neck tie and a pair of cowboy boots for his trip. They were also fined $20,000 for their stunt.

1
Jessie Sharp
Fourth to die from the plunge 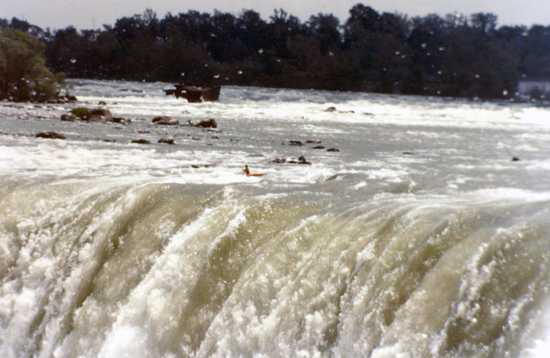 Jesse Sharp was an accomplished kayaker when he set off for his trip over Niagara Falls. He wanted to be the first person to kayak over the Horseshoe Falls. In his 3.6-meter kayak, Sharp refused to wear a helmet or a life-jacket. Sharp was known for dangerous stunts and his parents often alerted the police prior to his missions. This time, Sharp brought friends to film his trip. On June 5 1990, Jesse Sharp was last seen at the brink of Horseshoe Falls. His kayak was recovered but his body never was.