The gradual process of decline that brought the Roman Empire to an end is one of the all-time favorite history topics. That a nation so powerful could fall has always acted as a warning to any subsequent state that rose to a privileged geopolitical position. The ascension of Commodus in AD 180 is considered by many as the beginning of the end. But in reality, the exhaustion of Rome had started long before. 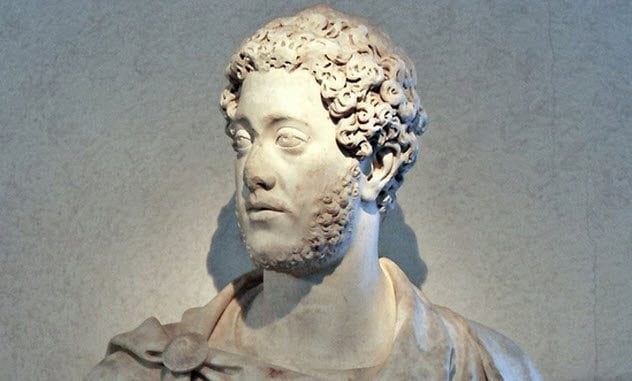 Augustus, the first Roman emperor, could never establish a clear imperial succession system. The result: When the time came to replace an emperor, there were numerous rivals for the throne competing with one another.

Sometimes, the potential emperors had an incentive to end the service of the ruling emperor prematurely so that they could take the throne for themselves. This is part of the reason behind the long record of imperial assassination plots.

The imperial succession was a fragile, unstable system. Within the first 200 years of imperial tradition, Titus (r. AD 79–81) was the only emperor who succeeded his own father, Vespasian, and Commodus in AD 161 was the first emperor to be born to a ruling emperor, Marcus Aurelius (r. AD 161–180). 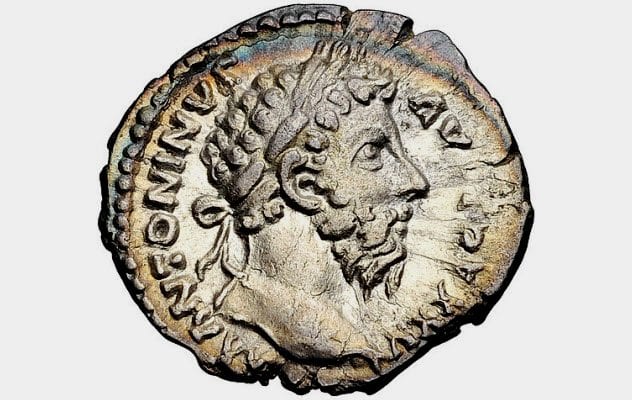 When Emperor Nero faced serious economic issues, he decided to debase the currency. Nero reduced the purity of Roman coins by decreasing the amount of precious metal in them. He did this gradually, expecting that the coins would still be accepted for their nominal value. But the reduction in purity became noted, followed by inflation. 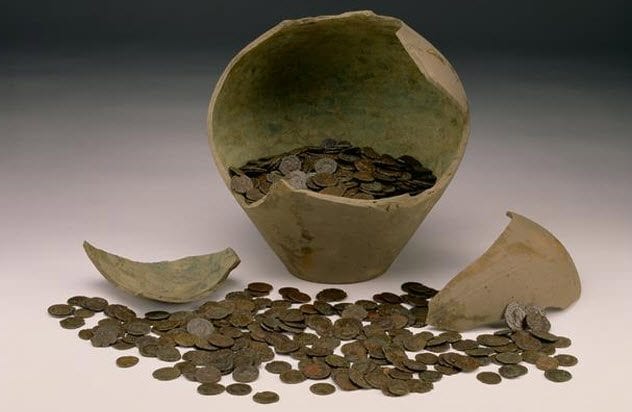 Debasement of Roman coins triggered a severe inflation problem. By AD 301, Emperor Diocletian was forced to issue an Imperial Edict on Prices to control inflation. During the 150 years prior to Diocletian’s edict, the value of silver had increased 86 times and gold, 45. The edict did little to solve the inflation problem.

Another side effect of inflation was the hoarding of coins. Unlike the debased coins, the “good coins” were kept as long as possible. Archaeologists have found many coin hoards from the late Roman Empire, a sign of economic uncertainty.

7 The Year Of The Four Emperors 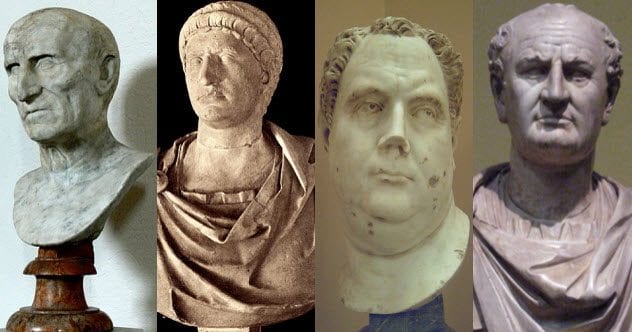 The AD 68–69 period is known in Roman history as “The Year of the Four Emperors,” which may be considered a premonition of the countless episodes of imperial instability and double-crossing that would later affect the Roman emperors.

After the death of Nero in June 68, the three emperors that followed only reigned for a short time: Galba for seven months (assassinated), Otho for three months (committed suicide), and Vitellius for eight months (also assassinated). In AD 69, Vespasian became the next emperor until his death in AD 79.

The political turmoil of this period is reflected in the writings of Tacitus. His introduction to this period of Roman history (Histories 1.2) reads: “The history on which I am entering is that of a period rich in disasters, terrible with battles, torn by civil struggles, horrible even in peace and four emperors killed by the sword.” 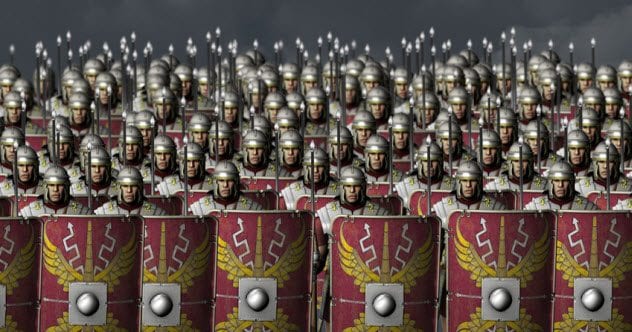 During the times of the Roman Republic and the early Roman Empire, the Roman army was supported with the booty of conquest. Each new region that was conquered by the Romans brought new land, new slaves to be sold, new taxpayers, and other forms of wealth.

When the Roman Empire reached its maximum size, the army activity became largely defensive. There was no booty conquest to support the soldiers, and the army had to be supported by taxes.

Once the guarantor of Roman growth and prosperity, the army gradually and ironically became a necessary evil that drained the wealth of the Roman people. The increasing tax pressure required to run the army forced many members of the Roman middle class into poverty (Matyszak 2008: 227). 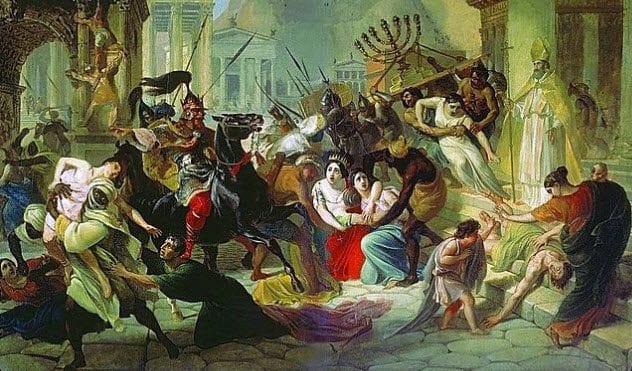 Many waves of barbarian armies weakened both the northern and eastern borders of Rome, gradually shrinking the size of the empire. Rome lost Britain in AD 406 when the Roman legions stationed there were summoned to continental Rome due to the threat of the Huns. Rome was sacked in AD 410 by the Visigoths under the leadership of Alaric.

By AD 455, Spain and North Africa were lost to the Vandals, who also sacked Rome the same year. Barbarian pressure was not a new thing in Rome. What was different this time was the almost complete incompetence of the Roman army to successfully repulse the invaders as they had many times in the past. 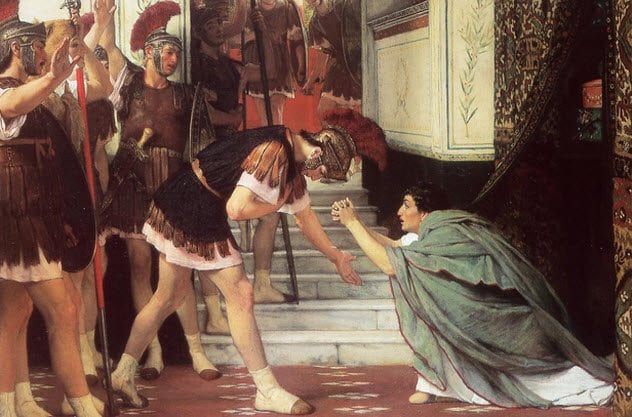 The members of the Praetorian Guard, a special branch of the Roman army, were household troops for the emperor and his personal bodyguards. As the power of the army increased, the Praetorian Guard occasionally got involved in the process of appointing new emperors, usually favoring those who favored them.

The reasons for this incentive varied. But one type of donative contributed to the political instability of Rome: A pretender to the throne would promise to pay a substantial reward if he became emperor. The sooner the acting emperor “finished” his government, the better for the Praetorian Guard’s pockets.

Emperor succession became truly messy during the late history of the Western Roman Empire. Many emperors died by the sword of their own bodyguards, who were anxious to receive their donative. 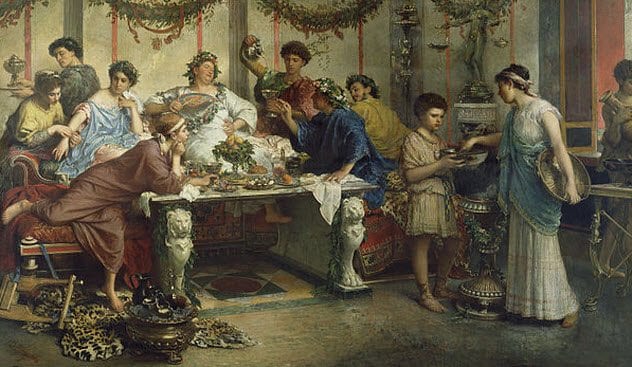 Although Rome is often depicted as a glorious and advanced nation in the imagination of the general public, social inequality was deeply rooted in Roman society. The backbone of the Roman economy was agriculture. It has been estimated that more than 90 percent of the late empire’s population were rural poor and endured a precarious existence.

This also implied an imbalance between the rural and the urban. Cities were sometimes seen as “predators” on the labor of peasants leading to the exhaustion of the land. Based on osteological studies of Roman skeletons from all periods and all parts of the empire, health issues linked to malnutrition were a common occurrence (Tainter 1990: 133; McKeown 2010: 58).

2 Size Of The Empire 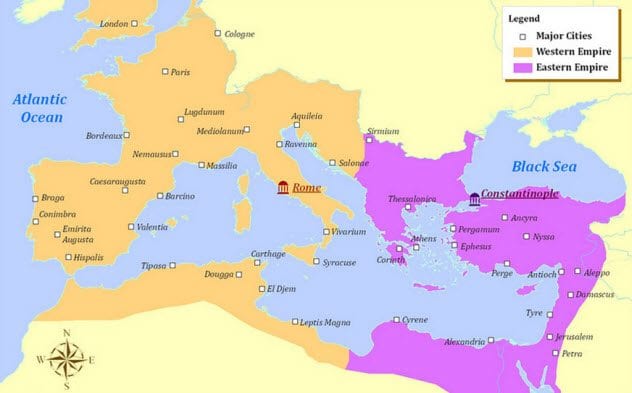 The size of the Roman Empire caused a number of issues. Distances were so long that travel across the empire took weeks. Its borders were so big that they required a considerable army presence to keep them safe. But above all, it was no longer possible to control this vast realm from the city of Rome.

The size of the Roman Empire is central to the study of its fall. It has stimulated many academic discussions about the limits of territorial expansion affecting all political units of a considerable size. Even today, historians and sociologists keep exploring this intriguing topic. 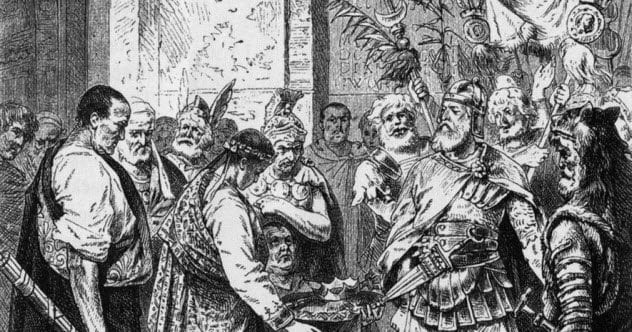 On September 4, AD 476, the last emperor of the Western Roman Empire, Romulus Augustulus, was deposed by Odoacer, a Germanic chieftain. Odoacer had served in the Roman army for years and had attained the rank of general.

A Roman emperor being deposed by a military leader was nothing new in Rome. The novelty was that nobody else was named emperor after Romulus Augustulus’s deposition and that Odoacer was crowned as king of Italy.

At this point, the Roman Empire was a shadow of its former self. Even the capital of the Western Empire had been moved from Rome to Ravenna. The Roman West was no longer an empire. It had dissolved into several smaller political units (kingdoms and city-states). The imperial traditions remained alive in the Eastern Roman Empire until its fall in 1453.