Most of us have used an online dating app or know someone that has used one. It can make meeting a significant other much easier because you can set your preferences and chat online to get to know them before any in-person date. Most of us think that the worst that can happen is that we’re not swept off our feet, or it’s just a bad date. I mean, we’ve all had bad dates.

But what happens when someone goes missing while on a date with someone they meet on an app? What if they are murdered? We don’t like to think of this as a possibility, but sadly predators use dating apps to lure in their victims—some for robbery or assault, but others end in murder. Here are ten more cases of dating-app dates that went wrong after swiping right.

On October 19, 2021, 36-year-old Heidi Carter met a woman through a dating app. She invited the woman and her boyfriend over to the house where she was staying for an evening of drinking, drugs, and a little more. After partying for a while, the three began engaging in some sexual activity, which was later interrupted by Carter’s boyfriend, Carey Hammond. He flew into a rage and began beating the couple with a baseball bat, tying up the man, Timothy Ivy, with duct tape and sexually assaulting the female.

Hammond later strangled Ivy to death, with Carter—now carrying Hammond’s gun—helping to keep the woman subdued in another room. Hiding the man’s body, Carter needed to clean up, so she hired a woman to come in and help her clean. The cleaner found Ivy’s body and managed to flee the home and alert the police. When the police arrived, Hammond was shot and killed during an altercation, and Carter was arrested. The restrained woman was treated and will survive her injuries.

Carter now faces a slew of charges, including murder, rape, felony criminal confinement, and abuse of a corpse.[1]

9 A Confession in Utah

At 3:19 am on May 24, 2020, Ethan Hunsaker called Layton police to report that he had killed a woman he met on Tinder. When police arrived, Ashlyn Black was lying limp on the floor with multiple stab wounds. Police attempted to revive her, but their efforts were in vain, and she was pronounced dead on the scene.

Hunsaker said that the two had met up at a bar, and they went back to his home to have sex. He woke up, saw Ashlyn sleeping next to him, and began choking her. Hunsaker then got a pocket knife and began stabbing the woman as she lay on his bedroom floor. She had stab wounds on her chest, side, and back. So far, Hunsaker has given no reason as to why he murdered the woman.

Hunsaker,26, pleaded guilty and mentally ill in June 2021. He is still awaiting sentencing.[2]

Michael Harris was arrested on January 23, 2021, for the death of Bobby Scott. Sixty-three-year-old Scott was reported missing by his husband the next day after meeting with twenty-year-old Harris on January 17. The two met through a popular dating app. However, after a week of not hearing from Bobby and no financial activity on any of his accounts, things were looking bleak.

Police eventually found Scott’s car in Harris’s possession, but Harris told police that Scott had lent him the vehicle and that he hadn’t seen him since their date. Harris was arrested for murder, even though Scott’s body wasn’t found until after the arrest. The medical examiner reported Scott died from blunt force trauma, likely from a 2×4 piece of wood and a bottle.

Harris is believed to be an internet predator, having met others through the dating app that he later robbed or assaulted. He has been charged with second-degree murder and is awaiting trial.[3]

The Sinister Case of Khalil Wheeler-Weaver

Between August and November 2016, four women connected with Khalil Wheeler-Weaver on a dating app and arranged to meet—three of the women were dead, and a fourth barely escaped. Wheeler-Weaver used dating apps and the social media app Tagged to lure his victims. His crimes were horrendous and likely would have continued if not for the family of his third victim.

The 20-year-old was a security guard and was noted as being clean-cut and well-dressed. But he harbored brutal tendencies. Robin West’s, his first victim, charred remains were found in an abandoned house; the cause of death undeterminable. His second victim, Joanne Brown, disappeared in October; her body was found in December, a victim of strangulation. Sarah Butler was his last victim. She agreed to meet Wheeler-Weaver after sending him a message: “You’re not a serial killer, right?”

Before Sarah’s murder, a fourth woman had met with Wheeler-Weaver but managed to escape. She told the police about her encounter. In the meantime, Sarah’s friends and family were determined to find out who killed Sarah. They found the messages Sarah had on Tagged and set up a fake profile to set up a date with Wheeler-Weaver. When he arrived at the designated place, the police were waiting to arrest him.

Wheeler-Weaver faced charges of murder, attempted murder, kidnapping, and arson. He was found guilty of 11 charges in December of 2019 and sentenced to 160 years in prison in 2021.[4]

6 A Tinder Secret in Mexico

Twenty-six-year-old Francia Ruth Ibarra was reported missing on December 3, 2016. It was discovered that Ruth was secretly dating Emmanuel Delani Valdez Bocanegra. The pair had met on Tinder and had been dating for several months. Bocanegra refused to meet Ruth’s friends and family, and he became a person of interest when it was reported that she was last seen at his apartment in Leon, Mexico.

Upon investigation, police found a bag of human bones along with caustic soda and hydrochloric acid. A DNA test confirmed that the remains were Ruth’s. Bocanegra had murdered her and dissolved her body in a vat of acid. When investigators asked why Bocanegra murdered Ruth, he said it was because she refused to have sex with him. Bocanegra was indifferent to the charges against him.[5]

Police: 19-year-old charged, accused of killing two men on same day after meeting them on Grindr

In the spring of 2021, 19-year-old Talent Bradley met two men on the dating app Grindr. After being arrested, he admitted to meeting and stabbing 62-year-old Robert Goodrich on May 26. Police connected him to a Red Toyota that was seen on neighborhood cameras around Goodrich’s house. The vehicle was later found at Bradley’s home.

A second man—63-year-old Randy Gwirtz—was also Bradley’s victim. When his family reported they were unable to locate Gwirtz, the police went to his home and found the man deceased, also from multiple stab wounds. The police believe Gwirtz died the same day as Goodrich, but his body was not discovered until June 7.

Bradley faces charges of murder, aggravated murder, and burglary. However, the charges were dropped in late 2021 after Bradley committed suicide while in jail, awaiting trial.[6]

4 A Fantasy Realized in the UK

After matching on the app PlentyofFish, Carl Langdell met Katie Locke on December 23, 2015. Langdell had spent the most recent two years in and out of psychiatric hospitals as he expressed he had violent sexual fantasies which involved killing a woman and assaulting her dead body. After his release, Katie unfortunately matched with him on PlentyofFish.

After meeting for drinks, the pair went to a hotel in Cheshunt, Hertfordshire, England. In the morning, the staff found that the bedding and towels were missing from the room; they also noticed the window lock was broken. Katie’s father raised the alarm when she did not come home. He went to Langdell’s mother’s house, where she called Langdell, and he admitted to everything. Katie was killed by strangulation, and Carl was arrested hours after his confession to his mother. Langdell was sentenced to 26 years in a mental facility.[7]

Shakira Graham met Meshach Cornwall on a dating app, and they decided to meet in person at Meshach’s house on December 15, 2018. Several days later, police responded to a call from a woman saying that she found her son, Meshach, unresponsive and covered in blood in the basement of his home. Meshach had been shot multiple times.

Graham became a person of interest and was arrested soon after Meshach’s body was discovered. It turns out that two days after their date, Graham returned to Meshach’s home, where she shot and killed him then stole various items from his home. Graham was found guilty of murder, grand theft, and receiving stolen property. Graham was sentenced to life in prison with the chance of parole after 25 years.[8]

2 Double Murder in the Bayou 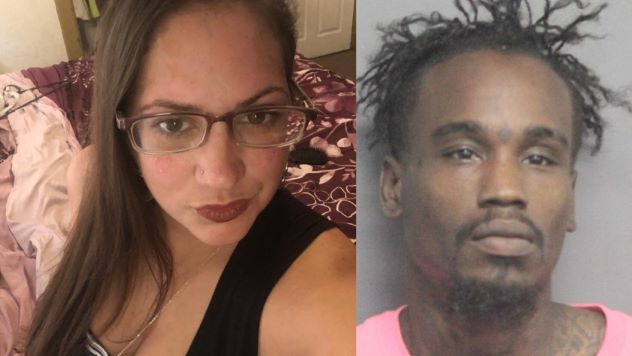 In October 2020, Jamal Harris and Jessica Toulliet matched on the dating app Tagged and met in person. Jessica expressed her disappointment with Harris’s appearance by telling him he did not look like his profile picture and he “looked like a pumpkin head.” A few days later, on October 3, 2020, the bodies of Jessica Troulliet and her father, Robert Templet Jr, were discovered inside her black Mercury Mountaineer. Both had been shot in the back of the head.

Relatives informed detectives that Jessica had a date with a man prior to her murder, which led the police to Harris, who admitted to seeing Jessica in person a few days before her murder. He told police that the night ended early after a disagreement. Detectives believe that Jessica agreed to drive Harris home, and her father came along for the ride. Harris allegedly murdered them after Jessica stopped the car. Harris was eventually arrested on October 21, and he currently faces two charges of first-degree murder.[9]

Tracking Down the Killer of Katherine Smith | Code Blue | ITV

Anthony Lowe and Katherine Smith met on PlentyofFish in 2017. The pair hit it off and were engaged after only one week. All was not well, though, because Lowe had lied about his age, saying that he was ten years younger than his actual age. He also said that his name was Tony Moore. Lowe immediately showed that he did not trust Katherine and would message her frequently throughout the day.

Just six weeks after the couple began dating, Katherine’s mother sensed something was wrong when she could not get in contact with her daughter. After persistently calling Katherine and contacting her friends to see if they had heard from her, the police were contacted. Police discovered Katherine’s body in her home. She had been stabbed 33 times in the neck, chest, and heart. It did not take long for police to gather that she was murdered by Lowe. He was arrested, tried, and sentenced to life with a minimum of 18 years.[10]