The biggest problem with “providing proof” of paranormal beings and incidents is the lack of clearly visible photographs or video footage. Ever since the shaky Patterson-Gimlin footage depicting an alleged Bigfoot started making the rounds, the world has been inundated with blurry photos and out-of-focus footage of ghosts, Nessie, aliens, and demons.

Even in our ultra-modern times, spooky social media posts and conversations about the paranormal on online forums have the ability to divide people. There are those who staunchly believe that any and all captured footage must be legit, and then there are those who refuse to be convinced, no matter what is presented to them.

10 Faces in the Water

In December 1924, James Courtney and Michael Meehan, crewmen on the oil tanker SS Watertown, were given the task of cleaning an empty cargo tank. A freak accident during the cleaning saw both men being overcome with gas fumes. Chief mate Kosti Taviola realized the men were in trouble and did his best to save them. Unfortunately, by the time he reached them, they were already dead. Taviola, too, was overcome by the fumes but was revived 30 minutes later.

As was the custom, Courtney and Meehan were given a sea burial, and the SS Watertown continued on its journey towards the Panama Canal. However, the remaining crew members soon started to report seeing something strange in the water. Upon closer inspection, the shocked crew realized they were staring at the faces of the two dead sailors. For several days, the faces appeared and bobbed in the water as the ship continued moving along. The captain of the oil tanker, Keith Tracy, snapped a now-infamous photograph as “proof” of the incidents.

While most people are convinced that this photograph is part of an elaborate hoax, there are many who believe that the spirits of the dead men kept watch over the oil tanker until it reached its destination.[1]

Demon Spotted “IF” the Arizona cryptid can be identified?

Ghostly images often go viral on social media. This was the case with an admittedly creepy photograph posted by Richard Christianson, who snapped the picture in Phoenix, Arizona, on January 1, 2017. He captioned it, “What the hell do you see in this picture for reals??? Anybody”

The photo depicts something that looks like an evil angel roaming an empty street. In the comments however, people were warring about whether it was an angel or a demon. Some were even arguing that it was evidence of the elusive Mothman. A few voices of logic tried to speak up, saying that it was clearly a palm tree, but they were overpowered by those who feared that supernatural beings were roaming around Phoenix.

A couple of commenters sniffed around Christianson’s profile and discovered that he made a living out of being a stagehand.[2]

Can anyone say prop? 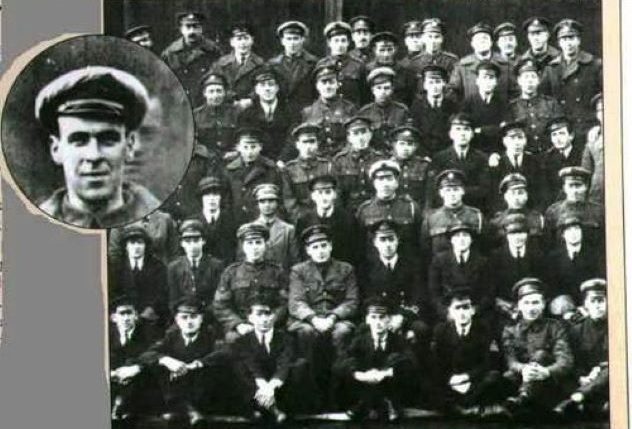 Victor Goddard, an Air Marshal in the Royal Air Force, was no stranger to the realm of the paranormal. He claimed to have had a clairvoyant episode in 1935, during which he saw what the abandoned Drem Airfield would look like in 1939.

Long before that, however, Goddard was present when a photograph of the so-called “Goddard Squadron” was taken in November 1918. The photo of the large group of servicemen was snapped at a training facility known as HMS Daedalus. When it was developed, Goddard spotted the ghostly image of a face half-hidden behind the fourth airman from the left. The man was the only one in the photo who was not wearing a cap and was identified as air mechanic Freddy Jackson.

The kicker, however, is that Freddy allegedly died three days before the photo was snapped—after he walked into the whirling propeller of a plane. Research has revealed that a Freddy Jackson did indeed work as an air mechanic for the RAF and that he died in April 1918, which would have been seven months before the photograph was taken.[3]

7 “Your Government Is Lying to You”

Believe It Or Not: Video Shows Alien Discovered in Siberia?!

In 2011, a video purporting to show a dead alien found in a “UFO hotspot” in Russia made huge waves on the internet. Within a week, the footage had been watched by over one million people. A message that appeared on the YouTube video stating, “Your government is lying to you about UFO & alien visitation,” gave many viewers chills.

But many tore the video apart, saying it was clear that the alien was a rubber doll and that the “discovery” had been staged. The lack of a spacecraft and the “posed” position of the alien had thousands convinced that the two Russian men who supposedly happened upon the dead creature had planned the entire thing.

Once again, however, there are also many people who believe that the video and images of the alien are 100% legit and that they serve as evidence of extra-terrestrial life.[4]

In 2018, yet another blurry photograph and short video were captured of a monster…camel. The creature was photographed roaming the streets of Santa Fe, Argentina, and was blamed for killing a German shepherd and a pitbull. Joining the tales of the Yeti, Bigfoot, and the Loch Ness Monster, this small-headed, long-necked beast has been described as being half animal and half human.

The over 30 000 commenters on the video mostly expressed their fear that the camel-like creature could be real, while one commented that he’d come across a similar-looking beast in 2005. Another viewer claimed that it could have been a man that had turned into a monster dog, while yet another stated that he’d believed the beast to be a Chupacabra, which forms a major part of Latin folklore.[5]

Mysterious Ghost Hand In Historic Photo Is Freaking People Out

In 2016, a woman named Lynda sent a historical photograph to Belfast Live. She noted that her grandmother, Ellen Donnelly, was one of the 15 women in the photo. The women were all linen mill workers in Northern Ireland and seemed happy and relaxed while getting their photograph taken in 1900.

Much like the Freddy Jackson photo, however, there is something strange about this one too. On the shoulder of the first girl on the right, in the second row, rests what seems to be a disembodied hand. The girl is Lynda’s grandmother.

Everyone surrounding the girl has their arms crossed, so the mystery of the hand remains. Is it a hoax? Highly likely. Has it been confirmed as a hoax? Not yet.[6]

4 The Unexplained UFOs of Salem 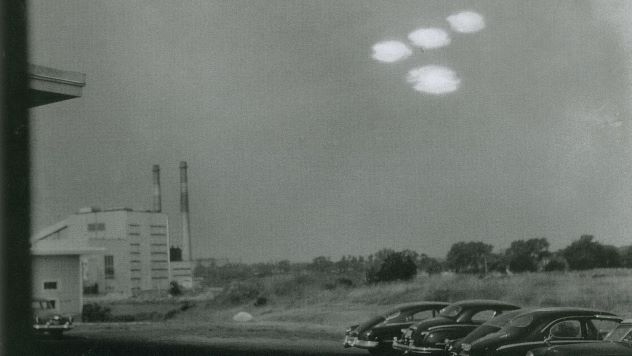 Salem, Massachusetts, has a dark enough history without unexplained flying objects darting around in the sky above it.

On August 3, 1952, Shel Alpert spotted four glowing objects in the morning skies brightening up the city of Salem. Mesmerized, he snapped a photo of what he saw, and the result was a photo that disturbs people to this day. The objects hovered over Winter Island and Cat Cove, and the photograph was taken from the Salem Coast Guard Air Station.

There isn’t much more information about this photograph, other than people stating that the UFOs were probably just the reflections of the window through which the photo was taken. Some, however, were convinced that this image depicted alien crafts, in line with several others that were taken throughout the 1950s.[7]

3 The Flying Dutchman of Lake Superior

Photo: https://www.cbsnews.com/news/ghost-ship-spotted-on-lake-superior/
In 2016, Jason Asselin was shooting a music video along the shore of Lake Superior in Michigan. After a full day of work, Asselin and his crew enjoyed the sunset, with Asselin filming a rainbow that had formed over the lake. To his surprise, he saw something shimmer in the distance and soon realized he was looking at what seemed to be a massive “ghost ship.”

With a history that includes more than 200 shipwrecks in the Lake Superior area alone, it made sense to many people that a ghost ship would appear on the horizon. Many even claimed to have seen the ghosts of sailors off the coast of Whitefish Point after the 1975 Edmund Fitzgerald sinking.

But scientists are not convinced. Associate professor of psychology, Mark Becker, said that the sighting was likely just the Granite Island lighthouse shimmering in the setting sun.[8] 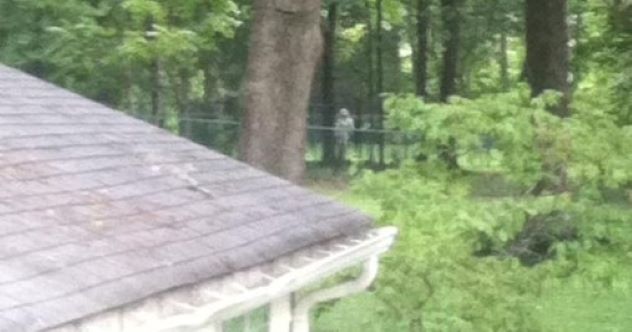 In 2021, a Reddit user, who works as a real estate photographer, posted a blurry image on the popular platform and claimed that he’d taken the photo outside a house in Tennessee that was once a Civil War army hospital. He further claimed to have been warned by the homeowner that the house was haunted.

As for the image itself, it seems to show an indeterminable figure standing in between the trees that surround the house. The man stated that he’d been told patients would have been operated on inside the hospital and moved out to the field (where the figure was snapped) to die inside makeshift tents.

But not everyone is on board with the idea that the figure is that of a Civil War ghost (or nun) who likes living in the past and doesn’t want to move on. Most of the comments on the post mocked the user, saying that the figure could be anything from a garden statue to a bird to a plastic bag stuck on the fence.[9]

1 The Little Girl Visiting Her Own Grave

Has this girl really visited her own grave?

Saundra Gonzales often placed toys and other small belongings at the grave of her deceased two-year-old toddler, Faviola, in 2020. One morning she noticed that some of the items had gone missing overnight. She requested other families visiting the Masonic Cemetery in Las Cruces, New Mexico, to keep an eye out for suspicious behavior as she believed a thief to be responsible for the disappearance of the items.

What she didn’t know, however, was that another family whose son’s grave was near Faviola’s had set up a camera in the hopes of catching the person vandalizing their beloved child’s grave. They didn’t see any vandalism, but what they did capture was the footage of a small girl walking over to the grave and bending over to have a look at the items placed there. The family showed the video to a cemetery worker who recognized the girl and immediately called Saundra.

Saundra burst into tears when she was shown the video, saying that it was Faviola standing there. In one of the images taken from the video, the girl seems to be holding the hand of a tall man, who is claimed by the family who gathered the footage to be their murdered son.

While Saundra fully believes that the images portray the spirit of her daughter, others are of the opinion that someone has let their own child into the cemetery and allowed her to take the toys from Faviola’s grave.[10]