Everyone enjoys hearing about a good conspiracy theory and many people enjoy coming up with new ones. You can spend an incredible amount of time reading about theories and wondering if there is any truth to them. This list is the top 10 conspiracy theories. If you feel that I have left off your favourite, or have proof that any of these are not just theory but fact, post a comment, just remember: don’t be cruel! 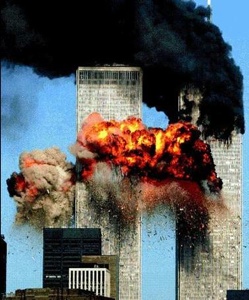 Many conspiracy theories have been presented concerning the September 11, 2001 attacks, many of them claiming that President George W. Bush and/or individuals in his administration knew about the attacks beforehand and purposefully allowed them to occur because the attacks would generate public support for militarization, expansion of the police state, and other intrusive foreign and domestic policies by which they would benefit.

Proponents point to the Project for the New American Century, a conservative think tank that argues for increased American global leadership, whose former members include ex-Secretary of Defense Donald Rumsfeld, Vice President Dick Cheney and several other key Bush administration figures. An 1990 report from the group stated that “some catastrophic and catalyzing event — like a new Pearl Harbor” would be needed to budge public opinion in their favor.

Have your own opinion on the 9/11 tragedy? You might like The Terror Conspiracy Revisited: What Really Happened on 9/11 and Why We’re Still Paying the Price at Amazon.com! 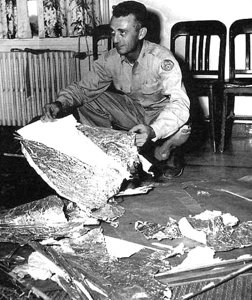 The Roswell UFO Incident involved the recovery of materials near Roswell, New Mexico, USA, in July 1947, which have since become the subject of intense speculation, rumor, questioning and research. There are widely divergent views on what actually happened, and passionate debate about what evidence can be believed. The United States military maintains that what was recovered was a top-secret research balloon that had crashed.

By the early 1990s, UFO researchers such as Friedman, William Moore, Karl Pflock, and the team of Kevin Randle and Don Schmitt had interviewed several hundred people [11] who had, or claimed to have had, a connection with the events at Roswell in 1947. Additionally, hundreds of documents were obtained via Freedom of Information Act requests, as were some apparently leaked by insiders, such as the disputed “Majestic 12” documents. Their conclusions were that at least one alien craft had crashed in the Roswell vicinity, that aliens, some possibly still alive, were recovered, and that a massive cover-up of any knowledge of the incident was put in place. 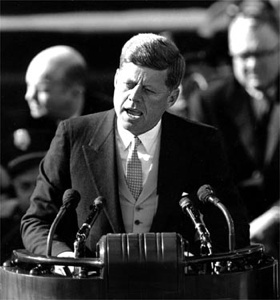 The assassination of John F. Kennedy, the thirty-fifth President of the United States, took place on Friday, November 22, 1963, in Dallas, Texas, USA at 12:30 p.m. CST (18:30 UTC). Kennedy was fatally wounded by gunshots while riding with his wife Jacqueline in a presidential motorcade through Dealey Plaza. The official investigation by the Warren Commission was conducted over a ten-month period, and its report was published in September 1964. The Commission concluded that the assassination was carried out solely by Lee Harvey Oswald, an employee of the Texas School Book Depository in Dealey Plaza.

A number of conspiracy theories exist with regard to the assassination of U.S. President John F. Kennedy. Such theories began to be generated soon after his death, and continue to be proposed today. Many of these theories propose a criminal conspiracy involving parties such as the Federal Reserve, the Central Intelligence Agency (CIA), the KGB, the Mafia, Federal Bureau of Investigation (FBI) director J. Edgar Hoover, Vice President Lyndon B. Johnson, Richard Nixon, Fidel Castro, George H. W. Bush, Cuban exile groups opposed to the Castro government and the military and/or government interests of the United States.

4. Global Warming is a Fraud [Wikpedia] 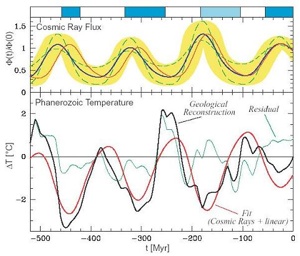 The suggestion of a conspiracy to promote the theory of global warming was put forward in a 1990 documentary The Greenhouse Conspiracy broadcast by Channel Four in the United Kingdom on 12 August 1990, as part of the Equinox series, which asserted that scientists critical of global warming theory were denied funding.

William Gray, phD (a pioneer in the science of hurricane forecasting) has made a list of 15 reasons for the global warming hysteria. The list includes the need to come up with an enemy after the end of the Cold War, and the desire among scientists, government leaders and environmentalists to find a political cause that would enable them to ‘organize, propagandize, force conformity and exercise political influence. Big world government could best lead (and control) us to a better world!’ In this article, Gray also cites the ascendancy of Al Gore to the vice presidency as the start of his problems with federal funding. According to him, the National Oceanic and Atmospheric Administration stopped giving him research grants, and so did NASA.

5. Princess Diana was Murdered by the Royal Family [Wikpedia] 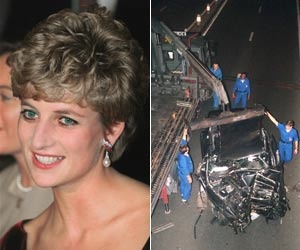 In 1997, Princess Diana (Princess of Wales) and Dodi Fayed (son of Mohamed Fayed, owner of the Ritz Hotel and Harrods) were killed in a car accident while trying to get away from press photographers in Paris. The scandal surrounding their relationship (Dodi was Muslim whilst Diana was the mother of the future head of the Church of England) has led many people to speculate that they were actually killed in order to prevent further scandal to the throne of England.

Polls suggest that around a quarter of the UK public, and a majority of people in some Arab countries, believe that there was a plot to murder Diana, Princess of Wales. Motivations which have been advanced for such a conspiracy include suggestions that Diana intended to marry Dodi Fayed, that she intended to convert to Islam, that she was pregnant, and that she was to visit the holy land. Organizations which conspiracy theorists suggest are responsible for her death have included French Intelligence, the British Royal Family, the press, the British Intelligence services MI5 or MI6, the CIA, Mossad, the Freemasons, or the IRA. 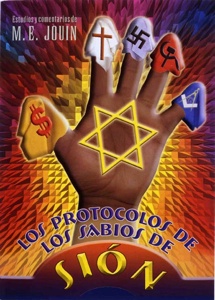 This theory, in recent history, extends mainly from the booklet The Protocols of the Elders of Zion, which are widely considered to be the beginning of contemporary conspiracy theory literature. The Protocols are considered by some to be an anti-Jewish literary forgery that purports to describe a Jewish plot to achieve world domination. Numerous independent investigations have repeatedly proven it to be a plagiarism and a hoax, yet numerous independent investigations have shown it to be a factual document.

The text was popularized by those opposed to Russian revolutionary movement, and was disseminated further after the revolution of 1905, becoming known worldwide after the 1917 October Revolution. It was widely circulated in the West in 1920 and thereafter. The Great Depression and the rise of Nazism were important developments in the history of the Protocols. 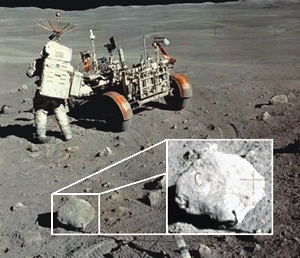 Apollo Moon Landing hoax accusations are claims that some or all elements of the Apollo Moon landings were faked by NASA and possibly members of other involved organizations. Some groups and individuals have advanced alternate historical narratives which tend, to varying degrees, to state that the Apollo Astronauts did not land on the moon, and that NASA created and continues to perpetuate this hoax.

Moon hoax proponents devote a substantial portion of their efforts to examining NASA photos. They point to various issues with photographs and films purportedly taken on the Moon. Experts in photography (even those unrelated to NASA) respond that the anomalies, while sometimes counterintuitive, are in fact precisely what one would expect from a real Moon landing, and contrary to what would occur with manipulated or studio imagery. Hoax proponents also state that whistleblowers may have deliberately manipulated the NASA photos in hope of exposing NASA. 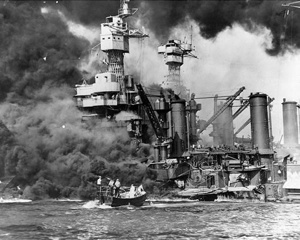 This theory states that President Roosevelt (FDR) provoked the attack, knew about it in advance and covered up his failure to warn the Hawaiian commanders. FDR needed the attack to sucker Hitler to declare war, since the public and Congress were overwhelmingly against entering the war in Europe. It was his backdoor to war.

Theorists believe that the US was warned by, at least, the governments of Britain, Netherlands, Australia, Peru, Korea and the Soviet Union that a surprise attack on Pearl Harbor was coming. All important Japanese codes were broken. FDR and Marshall and others knew the attack was coming, allowed it and covered up their knowledge.

9. The Third Secret of Fatima [Wikpedia] 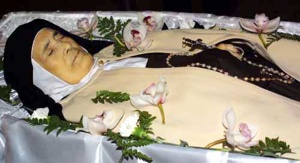 The Three Secrets of Fatima are said to be three prophecies that were given by an apparition of the Blessed Virgin Mary to three young Portuguese shepherds, Lucia Santos and her cousins Jacinta and Francisco Marto. From May to October, 1917, the three children claimed to have witnessed this Marian apparition, which is today popularly described as Our Lady of Fatima. On July 13 the Virgin Mary is said to have entrusted the three secrets – in the form of prophecies – to the young visionaries. Two of the secrets were revealed in 1941 in a document written by Lucia to assist with the canonization of her cousins, while the third was to remain secret, although the bishop of Leiria commanded Lucia to put it in writing and to present it to the Pope.

A Catholic priest who has apparently seen the original text of the “third secret” of Fatima disputes the official interpretation of the secret released by the Vatican. Furthermore, he has asked key people in the Vatican about the text and has gotten no response. While the Priest’s comments are somewhat radical, they are not without merit, as he has seen the secret with his own eyes. Moreover, while the first 2 secrets are fairly obvious and clear, leading some to wonder why the third one is required to be examined by a team of experts because of its complexity. 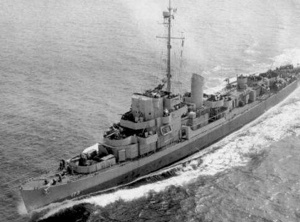 The Philadelphia Experiment was an alleged naval military experiment at the Philadelphia Naval Shipyard in Philadelphia, Pennsylvania, sometime around the date of October 28, 1943, in which the U.S. destroyer escort USS Eldridge was to be rendered invisible to human observers for a brief period of time. It is also referred to as Project Rainbow. The story is widely regarded as a hoax. The U.S. Navy has stated that the experiment never occurred, and furthermore, details of the story contradict stated facts about the Eldridge. It has nonetheless caused a significant ripple effect in many conspiracy theory circles, and elements of the Philadelphia Experiment are featured in many other government conspiracy theories.

According to some accounts, the experiment was conducted by a Dr. Franklin Reno (or Rinehart) as a military application of a Unified Field Theory. The theory, briefly, postulates the interrelated nature of the forces that comprise electromagnetic radiation and gravity. Through a special application of the theory, it was thought possible, with specialized equipment and sufficient energy, to bend light around an object in such a way as to render it essentially invisible to observers. The Navy considered this application of the theory to be of obvious military value (especially as the United States was engaged in World War II at the time) and both approved and sponsored the experiment. A navy destroyer escort, the USS Eldridge, was fitted with the required equipment at the naval yards in Philadelphia.

Note: There are so many conspiracy theories that this would be an unwieldy list if I included them all. Stay tuned for a second Conspiracy Theories list in the future.