A treasure trove is a large amount of gold, silver, gemstones, money, jewellery, or any valuable collection found hidden under ground or in cellar or attics, where the treasure seems old enough to presume that the true owner is dead and the heirs undiscoverable. Throughout history there have been some incredible treasures found. This is a list of the ten most amazing treasure troves. 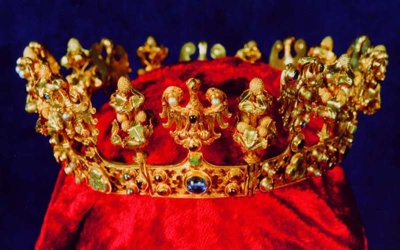 The ?roda treasure is one of most valuable archeological finds in 20th century. It was found in 1985 during renovation works in ?roda ?l?ska, Poland. The main part of the treasure is now in Regional Museum there. The treasures found include a Golden crown, probably belonging to Blanche of Valois, a wife of Emporer Charles IV, 2 12th century gold pendants, two 13th century gold pendants, a medieval gold clasp decorated with precious stones, three rings, 39 gold coins, and 2924 silver coins. 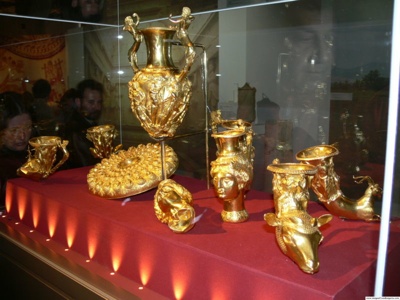 On the 8th of December 1949 three brothers – Pavel, Petko and Michail Deikovi worked together at the region of “Merul” tile factory near Panagyurishte. When processing a new layer of clay they came across unusual glossy objects. What they uncovered was the Panagyuriste treasure, a spectacular perfectly made Thracian treasure, one of the most famous treasures in the world. It consists of a phial, an amphora and seven rhytons with total weight of 6,164 kg of pure gold. All of the objects are richly decorated with scenes of the Thracian myths, customs and life. It is dated from the 4th-3th centuries BC. 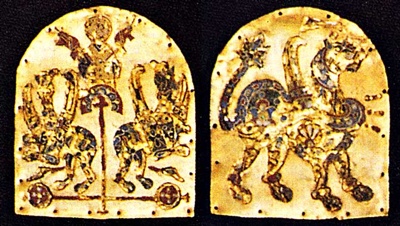 The Preslav Treasure was found in autumn of 1978 at the vineyard in Castana, 3 km to the north – west of the second Bulgarian capital – Veliki Preslav. The excavations that followed revealed more than 170 golden, silver and bronze objects including 15 silver Byzantine coins belonging to Constantine VII, Roman II (945 and 959) and other artefacts dating far back to the period between 3rd and 7th centuries. Several techniques of jewelry making were used in producing adornments, buttons, appliques etc: not limited to casting in moulds, toreutics, welding of small gold balls (granules) or fine gold wire (filigree), inlays of pearls and multi-colored enamel. 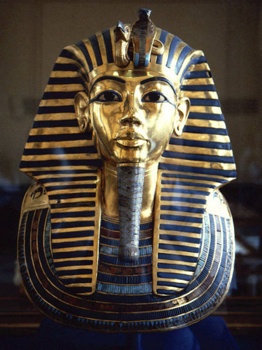 A list of treasures would not be complete if we were not to mention Tutankhamen’s treasure. It was discovered in his tomb in 1922 by Howard Carter, underneath the remains of workmen’s huts built during the Ramesside Period, which explains why it was spared from the worst of the tomb depredations of that period. Perhaps the most impressive piece found in Tutankhamun’s tomb is not the mask (shown above), although that is the most well known. Rather, the kings gold inner coffin, displays a quality of workmanship and an attention to detail which is unsurpassed. The coffin is made of solid gold. It is 74″ long, 20″ wide and 20″ high. The king is shown as Osiris holding the crook and flail, traditional symbols of kingship. The tomb contained other treasures as well, including the King’s throne.

Read all about one of history’s most important finds with The Complete Tutankhamun: The King, the Tomb, the Royal Treasure at Amazon.com! 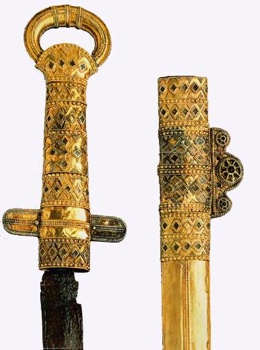 Yet another Bulgarian find, the Pereshchepina Treasure is a major deposit of Byzantine, Sassanian, and Avarian objects from the period of the Volkerwanderung. The deposit was discovered in 1912 in the village of Mala Pereshchepina (13 km from Poltava, Ukraine) by a boy shepherd who literally stumbled over a golden vessel and fell into the grave of Kuvrat, the founder of Great Bulgaria and father of Asparuh, the founder of the First Bulgarian Empire. The hoard contains more than 800 pieces. There are 19 silver vessels and 16 gold vessels, including a striking rhyton and remains of another. In addition, the find also contains a staff with gold facing, a well-preserved iron sword with an end in the form of a ring and gold facing on the hilt and scabbard, gold jewellery, and much more. 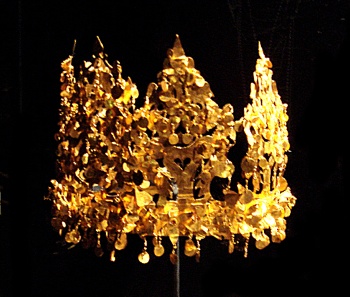 Tillia Tepe is an archaeological site in northern Afghanistan near Sheberghan, surveyed in 1979 by a Soviet-Afghanistani mission of archaeologists led by Victor Sarianidi, a year before the Soviet invasion of Afghanistan. The hoard is a collection of about 20,000 gold ornaments that was found in six graves (five women and one man) with extremely rich jewelry, dated to around the 1st century BCE. Altogether several thousand pieces of fine jewelry were recovered, usually made from combinations of gold, turquoise and lapis-lazuli. The ornaments include coins, necklaces set with gems, belts, medallions, and crowns.

7. The Treasure of Nagyszentmiklós – Romania 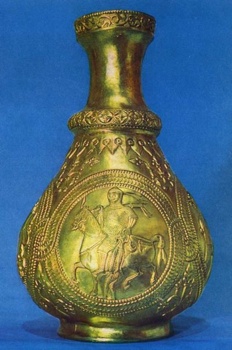 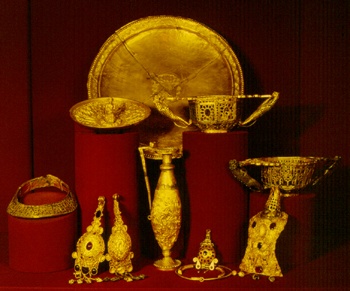 The Pietroasele treasure (found in Pietroasele, Buz?u, Romania, in 1837), is a late fourth-century Gothic treasure that included some twenty-two objects of gold, among the most famous examples of the polychrome style of Migration Period art. Of the twenty-two pieces, only twelve have survived, conserved at the National Museum of Romanian History, in Bucharest, some of the items are a large eagle-headed fibula and three smaller ones encrusted with semi-precious stones; and a patera, or round sacrificial dish, modelled with figures of what appear to be Gothic gods in Greek dress surrounding a seated three-dimensional goddess in the center.

9. The Treasure of Gourdon – France 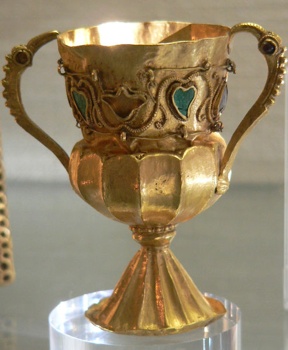 This treasure, unearthed near Gourdon, Saône-et-Loire, in 1845, is a hoard of gold, the objects dating to the end of the fifth or beginning of the sixth century, which was secreted soon after 524. When it was found the hoard comprised a chalice (shown above), a rectangular paten, similarly applied with garnets and turquoises in cloisonné compartments, together with about a hundred gold coins dating from the reigns of Byzantine emperors Leo I (457-474) through that of Justin I (518-527). 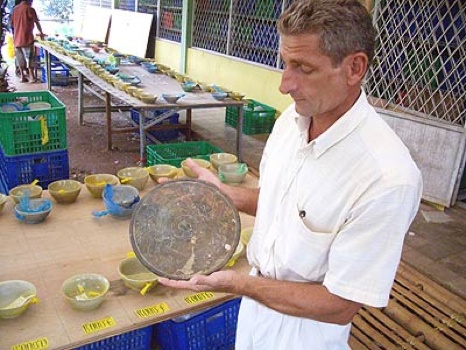 Our last treasure trove is the most recently found. The find contains close to 14,000 pearls, 4,000 rubies, 400 dark red sapphires, and more than 2,200 garnets. They were found on a ship that sunk off the shores of Indonesia more than 1,000 years ago. In addition to jewelry, the treasure hunters found tiny perfume flasks, jars made of baked clay, slender-necked vases, and brightly coloured glassware from the Fatimides dynasty that once ruled ancient Egypt. They also found dishes adorned with dragons, parakeets and other birds; porcelain with finely-carved edges; teapots decorated with lotus flowers; and celadon plates with their glaze intact. The find is valued at several million dollars; 50% of which will go to the government of Indonesia. 10th Century wrecks are extremely rare and this find fills a large gap in our knowledge of that period.

Notable Others: The Karun Treasure, The Treasure of Guarrazar

If you haven’t done so already, visit
Top 10 Science Fiction Movies
Sign up, comment, and be in to win one of five DVDs!