[WARNING: This list contains graphic violence and sexual scenes] I was inspired to write this list by a very poor attempt to do the same on another site. Considering some of the amazingly weird and horrible films people have discussed in the comments here, I figured we could do much better. So, in order of least to most disturbing, here are the top 15 most disturbing movies.

This might be a controversial entry as it is not as disturbing as some of the others, but frankly, the scene above (which many people find amusing) is very disturbing. While it does not portray physical violence, it portrays mental violence that can have a long reaching impact on a person. I also wonder what parents would allow their children to act in a scene like this.

Un Chien Andalou consists of seventeen minutes of bizarre and surreal images that may or may not mean anything. A straight razor seems to be placed by a woman’s eye, a small cloud formation obscures the moon, a cow’s eye is slit open, a woman pokes at a severed hand in the street with her cane, a man drags two grand pianos containing dead and rotting donkeys and live priests, and a man’s hand has a hole in the palm from which ants emerge.

A lonely Japanese widower whose son is planning to move out of the house soon expresses his sadness to a friend and fellow film producer, who becomes inspired to hold an audition for a non-existent film so that the widower can select a new potential bride from the resulting audition pool. The widower ultimately becomes enamored with and fascinated by one particular young woman…but first impressions can often be horribly wrong.

Requiem For A Dream – Trailer

For me, beyond any doubt, the scene involving a double ended sexual device was the most disturbing. This film is a descent in to a drug induced nightmare.

Bad Boy Bubby is just that: a bad boy. So bad, in fact, that his mother has kept him locked in their house for his entire thirty years, convincing him that the air outside is poisonous. After a visit from his estranged father, circumstances force Bubby into the waiting world, a place which is just as unusual to him as he is to the world. This film involves incest.

A camera crew follows a serial killer/thief around as he exercises his craft. He expounds on art, music, nature, society, and life as he offs mailmen, pensioners, and random people. Slowly he begins involving the camera crew in his activities, and they begin wondering if what they’re doing is such a good idea, particularly when the killer kills a rival and the rival’s brother sends a threatening letter.

The intercut story of two women: a nearly-mute beauty queen who descends into withdrawal and madness, and another who captains a ship laden with candy and sugar, luring men and boys aboard for sex, death, and revolutionary talk. The beauty queen passes from a wealthy husband whose honeymoon delight is to urinate on her, to a muscular keeper who punches her, stows her in a suitcase, and ships her to Paris, to a lip-synching rock idol with whom she has a love spasm, to an Austrian commune complete with a banquet of vomit, urine, feces, chopped dildos, and wet nurses. By then she’s in a fetal position, until everyone’s rescued by reminders that “it’s just a movie.”

I don’t know if it is just me, but I find extreme surrealism very disturbing – this film falls in to that category. For your viewing pleasure, the entire film is included here.

A Christlike figure wanders through bizarre, grotesque scenarios filled with religious and sacrilegious imagery. He meets a mystical guide who introduces him to seven wealthy and powerful individuals, each representing a planet in the solar system. These seven, along with the protagonist, the guide and the guide’s assistant, divest themselves of their worldly goods and form a group of nine who will seek out the Holy Mountain, in order to displace the gods who live there and become immortal.

The brutal rape scene in Irreversible is truly horrific and that scene alone garners it a place on this list. 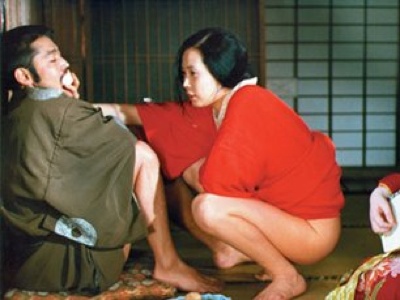 Based on a true story set in pre-war Japan, a man and one of his servants begin a torrid affair. Their desire becomes a sexual obsession so strong that to intensify their ardor, they forsake all, even life itself.

Henry likes to kill people, in different ways each time. Henry shares an apartment with Otis. When Otis’ sister comes to stay, we see both sides of Henry; the “guy-next-door” and the serial killer. Low budget movie, with some graphic murder scenes.

Yakuza boss Anjo disappears with three hundred million yen. His loyal gang members, lead by the masochist Kakihara, start a search, but their aggressive and gory methods worry the other yakuza gangs. Kakiharas most frightening counterpart is the mysterious Ichi, a psychopathic killer with a dark childhood secret, who is controlled by a retired cop.

Salò, or The 120 Days of Sodom – Avert Your Eyes, Children

Set in the Nazi-controlled, northern Italian state of Salo in 1944, four dignitaries round up sixteen perfect specimens of youth and take them together with guards, servants and studs to a palace near Marzabotto. In addition, there are four middle-aged women: three of whom recount arousing stories whilst the fourth accompanies on the piano. The story is largely taken up with their recounting the stories of Dante and De Sade: the Circle of Manias, the Circle of Shit and the Circle of Blood. Following this, the youths are executed whilst each libertine takes his turn as voyeur. I can only find this brief clip of the film on youtube. I would just like to point out the fact that it is not chocolate they are eating.

In the beginning of this film we meet a documentary team of three young men and a young woman. They are heading for the south-American jungle to search for real cannibals. After a while the crew is reported missing and a rescue team is send from the US. This team gets in touch with an amazon tribe called the Tree-people. The tree-people gives them the only remains of the first crew – the film rolls containing the material this crew shot during their search for real cannibals. Back in the US we get to see these films. We now get to see exactly what happened to the first crew.

Some text sources are courtesy of IMDB