When Margaret Thatcher came to power in 1979, Britain was a dump, “the sick man of Europe” and on the brink of total economic collapse. When she left power in 1990, it was the one of the financial capitals of the world. She is associated with her political philosophy of Thatcherism, based on low taxation, low public spending, free markets and mass privatization. I, personally, love Margaret Thatcher for her honesty, bluntness, strength of character and her radicalism. Many others hate her, though, mainly on the left of politics who believed that she destroyed workers rights and slashed public spending. During her tenure she had to deal with mass unemployment, out of control inflation, endless strikes, a war with the Falklands and an attempted assassination by the IRA. In February 2007, she became the first British Prime Minister to be honoured with a statue in the House of Commons while still alive; a testament to her incredible legacy. 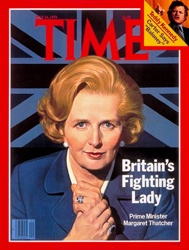 1. Pennies don’t fall from heaven – they have to be earned here on earth.
2. No one would remember the Good Samaritan if he’d only had good intentions; he had money as well.
3. Economics are the method; the object is to change the heart and soul.
4. My policies are based not on some economics theory, but on things I and millions like me were brought up with: an honest day’s work for an honest day’s pay; live within your means; put by a nest egg for a rainy day; pay your bills on time; support the police.
5. Defeat? I do not recognise the meaning of the word. 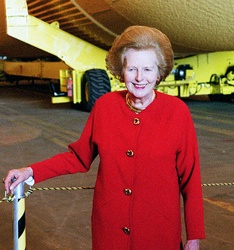 6. I, personally, have always voted for the death penalty because I believe that people who go out prepared to take the lives of other people forfeit their own right to live. I believe that the death penalty should be used only very rarely, but I believe that no-one should go out certain that no matter how cruel, how vicious, how hideous their murder, they themselves will not suffer the death penalty.
7. Socialists cry “Power to the people”, and raise the clenched fist as they say it. We all know what they really mean—power over people, power to the State.
8. There’s no such thing as society.
9. A man may climb Everest for himself, but at the summit he plants his country’s flag.
10. (to Conservative backbench MP John Whittingdale) The trouble with you, John, is that your spine does not reach your brain. 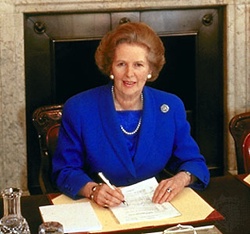 11. For every idealistic peacemaker willing to renounce his self-defence in favour of a weapons-free world, there is at least one warmaker anxious to exploit the other’s good intentions.
12. Constitutions have to be written on hearts, not just paper. 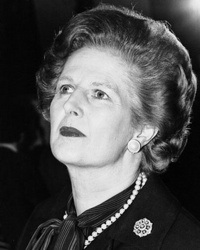 16. Being powerful is like being a lady. If you have to tell people you are, you aren’t.
17. I am extraordinarily patient, provided I get my own way in the end.
18. If you want to cut your own throat, don’t come to me for a bandage.
19. There can be no liberty unless there is economic liberty.
20. I usually make up my mind about a man in ten seconds, and I very rarely change it. 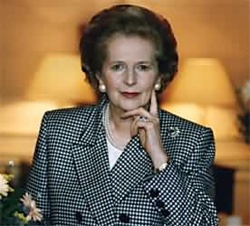 21. It pays to know the enemy – not least because at some time you may have the opportunity to turn him into a friend.
22. It is not the creation of wealth that is wrong, but the love of money for its own sake.
23. I always cheer up immensely if an attack is particularly wounding because I think, well, if they attack one personally, it means they have not a single political argument left.
24. Popular capitalism is nothing less than a crusade to enfranchise the many in the economic life of the nation.
25. Imagine a Labour canvasser talking on the doorstep to those East German families when they settle in on freedom’s side of the wall. “You want to keep more of the money you earn? I’m afraid that’s very selfish. We shall want to tax that away. You want to own shares in your firm? We can’t have that. The state has to own your firm. You want to choose where to send your children to school? That’s very divisive. You’ll send your child where we tell you.”

Bonus: I don’t think there will be a woman Prime Minister in my lifetime. – BBC interview, 1973