Be in to win an iPod! – read the list for our competition details. In just a few days it will be Halloween! The night of trick or treating, costumes, candy, and all things spooky. In celebration I have put together a list of the 10 songs that absolutely must feature at your halloween party – or, failing that, songs you must load onto your iPod to help you get in the mood. I have tried very hard to provide you with the most diverse and interesting set of songs possible – so while you may not see all of your favorites, you should see at least one or two new ones to add to your collection. Be sure to tell us your own favorites in the comments.

15
Bark at the Moon
Ozzy Osbourne

A list like this would not be complete without the awesomeness which is Ozzy Osbourne! This track is from the Bark at the Moon Album recorded in 1983. Ozzy is, of course, most famous for being the lead singer of Black Sabbath and it would be seriously wrong not to include him on this list.

We have two firsts on this list – things I never thought I would see! One is Marilyn Manson, and the other is country music! It isn’t my personal favorite, but this song definitely rates as a classic Halloween party song perfect to get people moving about and dancing. It contains brilliant violin playing by Charlie Daniels and even the most anti-country music people should enjoy it.

13
The Raven
The Alan Parsons Project

Granted it isn’t the most horrifying song, but it is a tribute to Edgar Allan Poe and provides a nice alternative to some of the heavier music on this list. This is probably the best song to play as your party is nearing an end – when people are either too drunk to care what you play, or sober enough to appreciate the lyrics which are taken directly from the Poe poem of the same title.

I have to be honest and admit that I had never heard this song before I started researching this list – but it is definitely going to rank high for those of our readers planning a more hardcore party than the others. Also, for those of you who are planning to spread humbug this Halloween, you can play this at a very loud volume and you will frighten all the kids and parents who are trick or treating – save on candy costs!

This is a great hit from the ’60s which went to number one in the UK. While it is not a particularly scary track, it is, for many people listening, likely to bring back many memories of Halloween parties of the past. This is one of my favorite songs on the list.

This song is a lighthearted song – most appropriate for the early stages of your Halloween party. This (and item 3 on the list) is perfect for playing as your guests are arriving and having their first drinks. It is also perfect for a kids Halloween party. And if you want some entertainment for the night, why not watch the film – you can buy it here.

The Addams Family was a 1964 hit series based on cartoons by Charles Addams. The theme will be familiar to most people either through the original series of the much more recently made movie. This is a great quirky hit for your party – a definite must-play.

8
Welcome to my Nightmare
Alice Cooper

This song is from the album of the same name by Alice Cooper. It is a concept album in which each track progressively details the passage of a nightmare. This is the opening track and what could be more perfect for a loud Halloween Party.

7
This Is Halloween
Marilyn Manson

Rather than use the original soundtrack version of the song, I have chosen to use the Marilyn Manson version because I like it much more and think it has a better Halloween “feel” about it. I also love the Panic at the Disco version, but there is no doubt that the Manson version is the spookiest. The song is, of course, the title track of the brilliant Tim Burton film “The Nightmare before Christmas” which you can buy here.

Everyone knows this song – it has been used in hundreds of horror movies. While the song sounds very eerie, the translation of the Latin original is not quite so spooky – it actually means “O Fortune, you wax and wane like the moon”. Hardly frightening stuff, but most people don’t know what it means and it will chill everyone that hears it to the bone! A definite must-have for Halloween. Oh – and it is from the cantata called Carmina Burana. I have picked an excellent version of it for you to buy:

Anyone who has seen the Exorcist will appreciate the eeriness of this soundtrack. It plays at the start of the film as the main actress walks home from a day filming. The scene is full of moody shots of Washington in fall with children trick or treating. It lulls you in to a false sense of security before all hell breaks loose (literally) in the form of possessed girl Regan. This song will always be my favorite Halloween theme. Oh – and if you don’t already have a copy of the movie, you can get it here.

This excellent track by Warren Zevon features drumming by Mick Fleetwood of Fleetwood Mac. It will be familiar to most people through its constant (over-)use in movies. Everyone will expect to hear this song at a party – don’t disappoint them.

If there is any one song on this list that people will be expecting to see – it is this. Monster Mash is a hilarious and fun song from 1962 sung by Bobby “Boris” Pickett. In a bizarre and rather lame attempt at a comeback, Picket released a spin-off of the song in 2005 called “Climate Mash”, a version with re-written lyrics about global warming and new vocals which was released on the Internet by the organization Clear the Air. Forget clearing the air for now – fill it with spooky mist and party!

Of this most famous piece of classical music, Wikipedia says: The Toccata and Fugue in D minor, BWV 565, is a piece of organ music commonly attributed to Johann Sebastian Bach, composed sometime between 1703 and 1707. It is one of the most famous works in the organ repertoire, and has been used in a variety of popular media ranging from film, to video games, to rock music, to cellphone ringtones and used for the autumn holiday Halloween. I doubt a single person here will not know it. Props to Bach for writing music so cool that even non-classical lovers still listen to it – 300 years later!

Michael Jackson had to be number one. This track was damned scary when it came out, and it is still damned scary (though perhaps for different reasons now). I am sure that no one will dispute this item’s placement as number one greatest halloween party song. Allow me to finish with a little inappropriate humor: do you know why Michael Jackson loves Halloween? Free delivery right to his door.

Bonus
Win Merchandise and an iPod 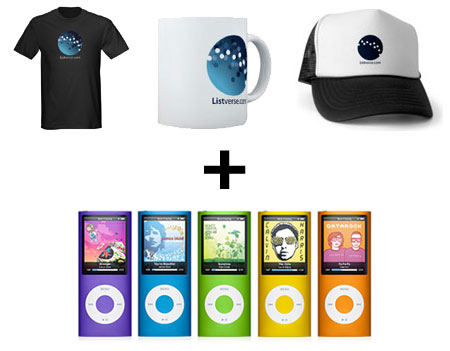 At Midnight (Pacific time) on Halloween (31st October), one commenter on this list will be selected at random to win a mug, shirt, or cap from the List Universe Store. In addition, the winner will receive an 8 GB iPod Nano (latest version) in any color of their choosing (most, but not all, colors are shown above)! The winner must be a registered user (registration is free and easy). As usual, comments must be related to the list and not designed just to increase the count or your chances of winning. Every comment is counted – so you can comment more than once. For those who can’t wait to get some merchandise, the store prices have now all been discounted! So be sure to check it out. All products sold at the List Universe Store are of a high quality. Shipping takes 7 – 11 days.