Everyone loves a good Christmas special. But when it comes to Halloween, the choices feel sparse. Anyone can throw on a horror movie, but those can be too nightmare-inducing for kids (and even some adults).

What do people watch when they like getting into the spooky spirit? Just the Treehouse of Horror episodes on The Simpsons or It’s the Great Pumpkin, Charlie Brown?

Rankin and Bass were the masterminds behind Christmas classics Rudolph the Red-Nosed Reindeer, Jack Frost, Frosty the Snowman, and many more. In the mid-1960s, fresh off the success of Rudolph and the Willy McBean and His Magic Machine theatrical film, they dabbled in a Halloween special.

This wasn’t just a silly special. This was a full-length film that showed obvious psychedelic influence with its original rock soundtrack and stellar voice talent. It starred Boris Karloff, Allen Swift, Phyllis Diller, and Ethel Ennis. The cast of characters included Frankenstein, the Mummy, Count Dracula, the Werewolf, and more.[1]

The film uses Rankin/Bass’s classic “Animagic” style of animation to tell the story of a gathering at Dr. Frankenstein’s castle where he has invited his monster friends and his human nephew. It’s a trip that’s worth the watch. Halloween episodes of cartoons don’t count for this list, but this was considered a very special Flintstones program that was apart from the regular show canon. It aired like a TV movie on October 3, 1980, on NBC.[2]

Fred and Wilma win a vacation from a game show called Make a Deal or Don’t to visit Count Rockula’s castle in Rocksylvania. They take Betty and Barney along for the trip where they unwittingly learn that Rockula is making a Frankenstone monster in his laboratory.

The classic humor of the prehistoric Flintstones is met with a bevy of Halloween jokes and Frankenstein references for a unique special that stands out from the show.

This one is a true late ’70s gem. First of all, the animation is uniquely freaky. It’s purposely drawn gross and squiggly, making this wholesome cartoon sometimes hard to watch. However, the voice talent is spectacular.

The titular witch is voiced by the one and only Gilda Radner who has been depressed that Halloween isn’t as scary as it used to be. No one wants to be scared anymore, so she feels useless.[3]

Two criminals find the witch’s magic wand, which she threw out in the midst of her Halloween depression, and they use it for ill will. It’s up to the witch and two kids who are at home with a babysitter to stop the criminals from turning the whole town into actual scary monsters to wreak havoc on Halloween.

The movie Frankenweenie was released in 2012. But that full-length movie was based on a short film made in 1984 about a boy who revives his dead dog, Sparky, in a Frankenstein-inspired experiment.

The short film, which aired on the Disney Channel and was also called Frankenweenie, is adorable and creepy. It has all the elements of a classic Tim Burton film, except the 1984 version is live action and includes a cute real dog with bolts attached to its neck.[4]

Starring Rhea Perlman, this 1991 classic mixes Halloween with outer space for an interplanetary Halloween adventure. Two Martians crash-land on Earth during Halloween to get candy for their home planet.

They land in the small town of Crystal Lake, known for its candy factory. However, the scientists at the factory have been draining the town’s candy supply in their efforts to find eternal youth. Since its candy economy is declining, the whole town is relocating its residents, making this the last Halloween.[5]

In only half an hour, all these things are explored as the aliens join forces with two kids having their last Halloween in town before they move away.

The Grinch, a Dr. Seuss character whose time to shine is Christmas, is back, and he also hates Halloween. This special won the Primetime Emmy in 1978 for Outstanding Children’s Program.

Who doesn’t love the Grinch in this spooky return?

When a “sour-sweet wind” blows, it is officially Grinch Night in Whoville. The Grinch and his dog, Max, are set to terrorize Whoville on Grinch Night when they run into a polite little boy who wandered away from town. The Grinch instead shows the boy his “paraphernalia wagon” which is full of monsters drawn in fantastically surreal and eerie animation.[6]

The Worst Witch is based on a series of books by Jill Murphy and has a lot of similarities to Harry Potter. Fairuza Balk plays a young witch named Mildred Hubble who attends a prestigious school for witches. She’s basically flunking all her classes as she gets bullied by snooty witches and mean teachers.

Mildred is the last person anyone expects to save the school from dangerous rogue witches in the woods. The Worst Witch also has the all-time best cameo anyone could ask for: Tim Curry as a warlock singing a funky ’80s jam about why Halloween is the best day of the year. This alone makes this special well worth the watch.[7]

The cartoon is based on a Ray Bradbury book that traced Halloween and Samhain’s historical roots. Luckily, Bradbury also wrote the script for this Emmy-winning adaptation. The special aired in October 1993. Sometimes, it can still be seen on the Cartoon Network around Halloween.

2 The Halloween That Almost Wasn’t

This 1979 live-action special stars Judd Hirsch as Count Dracula. He hears rumors that Halloween might be canceled forever because the monsters just aren’t scary anymore. Watching the TV news, he learns that the blame for Halloween’s end is being placed solely on him.

Upset and worried that he might have to move out of Transylvania to live a more “normal” life, Dracula calls upon his monster friends to fix their images or risk losing Halloween and their scary identities altogether.[9]

This special originally aired on the Disney Channel, where it won an Emmy and was nominated for three more. The film has since been retitled in video releases as The Night Dracula Saved the World. 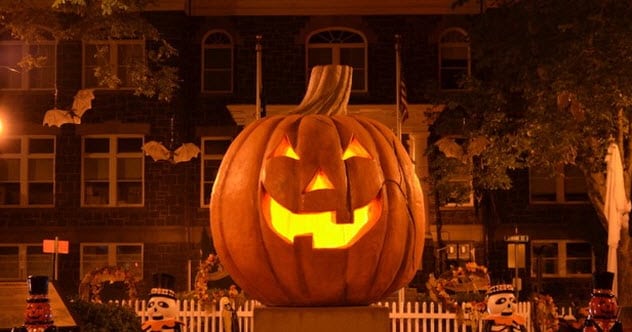 Disney has made several worthwhile made-for-TV Halloween movies, but none is as classic as Halloweentown. This film isn’t necessarily “forgotten.” But it should certainly be more celebrated as a unique, campy, and heartfelt spooktacular ride into the fictional town where Halloween is life.[10]

Around her 13th birthday, Marnie and her siblings visit Grandma in Halloweentown. There, they learn that they come from a family of witches. So they have to come to terms with being witches and learn to harness their powers for good as the family fights against evil that threatens to destroy the world.

Halloweentown has several sequels, but it’s hard to beat the 1998 original.

Stephanie Weber is a comedian and writer whose work has been published in Mental Floss, Slate, The AV Club, Reductress, and much more. She is a writer for Mr. Skin.

For some creepy Halloween stories, check out 10 Creepy Unsolved Mysteries That Happened On Halloween and 10 Creepy Rituals We Once Used To Celebrate Halloween.